Competition Eating: Not a Sport to Emulate

We are indeed a nation of wacky folks. I’m just shaking my head at the craziness of it all. We are currently suffering from a serious health threat due to obesity, have the world’s biggest overweight problem, a million people struggling to control their errant eating and last weekend–and one of the big events–was a competition I hope you never enter. Competitive eating. In honor of the 4th Nathan’s Fourth of July International Hot Dog Eating Contest was held. Over 30,000 spectators attended this event in 2006, it was broadcast on ESPN, and an additional 1.5 million households watched it live.

This is not what I would regard as a sport. The 94th annual contest this year featured six time winner Takeru “Tsunami” Kobayashi and Joey Chestnut, both previous champs. The winner, Chestnut, set a new record of 68 hot dogs and buns in 10 minutes, while Tsunami finished second with only 64 and a half hot dogs. According to legend on July 4, 1916 four immigrants had a hot dog eating contest at Nathan’s hot dog stand on Coney Island to settle an argument about who was the most patriotic. It has been held almost every year since. These competitive eaters defend their practice, and find a thrill in cramming food down their throats while crowds cheer them on.

Eating is often entertaining, but food is fuel for the body. There are foods that are high-grade fuel, and those that are not so healthful. Fresh fruits and vegetables are high quality foods that keep your body running at optimal performance level. Hot dogs are among the worst. Hot dogs are a calorie dense food, and have very little nutritional value. One hot dog–just one–and a bun average about 300 calories. This year’s winner, Joey Chestnut, ate 68, which adds up to 20,000 calories consumed in 10 minutes. That’s enough calories to maintain an average person’s body weight for 10 days. Somehow I don’t imagine that our gobbling champs abstained for the required 10 days.

This contest is one of the most widely publicized, but many others exist also. At www.competitiveeaters.com a list of annual eating contests includes tacos, meatballs, chili, chocolate chip cookies, burgers, and pastrami. All of these are high calorie items. Regularly overeating, as we all know, can seriously threaten your health. Doctors warn that this practice of overeating rapidly to compete against others could result in morbid obesity, profound gastroparesis, intractable nausea and vomiting, and even the need for surgical intervention to remove part of the stomach. Longtime competitive eaters develop diabetes and acid reflux diseases. One competitor said “I knew it wasn’t healthy, but when everyone is cheering, they announce your name and you get your picture in the newspaper, it makes you feel proud, even while you’re bloated and ill. This contestant continued to compete, ballooned to 400 pounds, and felt tired and out of breath. He had an inflammatory disease called sarcoidosis. His arteries clogged, generating chest pains. Finally he retired, underwent gastric bypass surgery and is now half his former size, only 205 pounds. He says he turned his need to compete to bowling and poker playing, which is better for his health. “Any way you look at it, it’s not healthy, he said of his former days. You do it now and then and its fun, but I know loading your body with fat and salt is not healthy.” After 35 years of gobbling hamburger, oysters, eggs, corn on the cob, and even bull testicles, Dave “coondog” O’karma listened to his family and retired from competition.

These days most of us are trying to slow down and decrease the volume of our eating, maybe this contest will turn the tide by presenting such a disgusting spectacle, it will provide the impetus to control our own mild gastric excess and get control of how much and how fast we put food in our mouths.

That's a switch!!! Previous
Explore the Palmetto State on One Tank Next 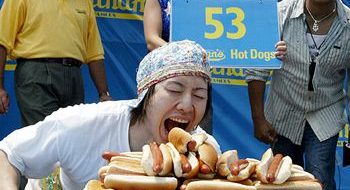 Competition Eating: Not a Sport to Emulate