Driving through the Kebler-Pass in the Crested Butte and Gunnison Trails Area. 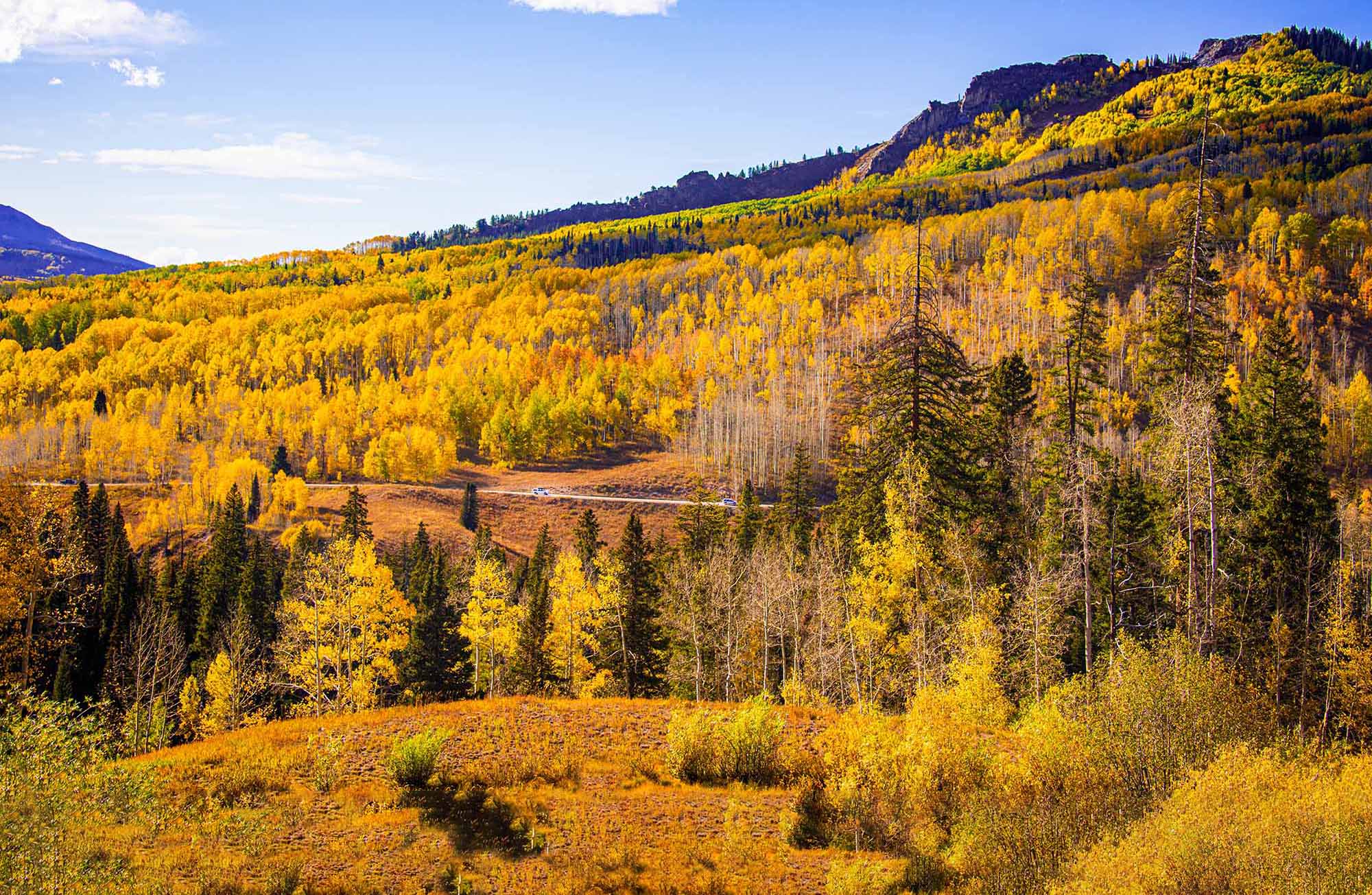 Robert Dundas has been studying the archaeology of the Desert Southwest for decades, a passion that has led him to take countless RV trips to explore the ancient wonders of Native American historical sites throughout the area. But when the long hot days of summer transition into fall, Dundas heads for the backroads of Colorado, where he enjoys some of the most spectacular aspen trees in the world. The seasonal red and golden hues of the leaves make this one of the top fall color destinations in the U.S. 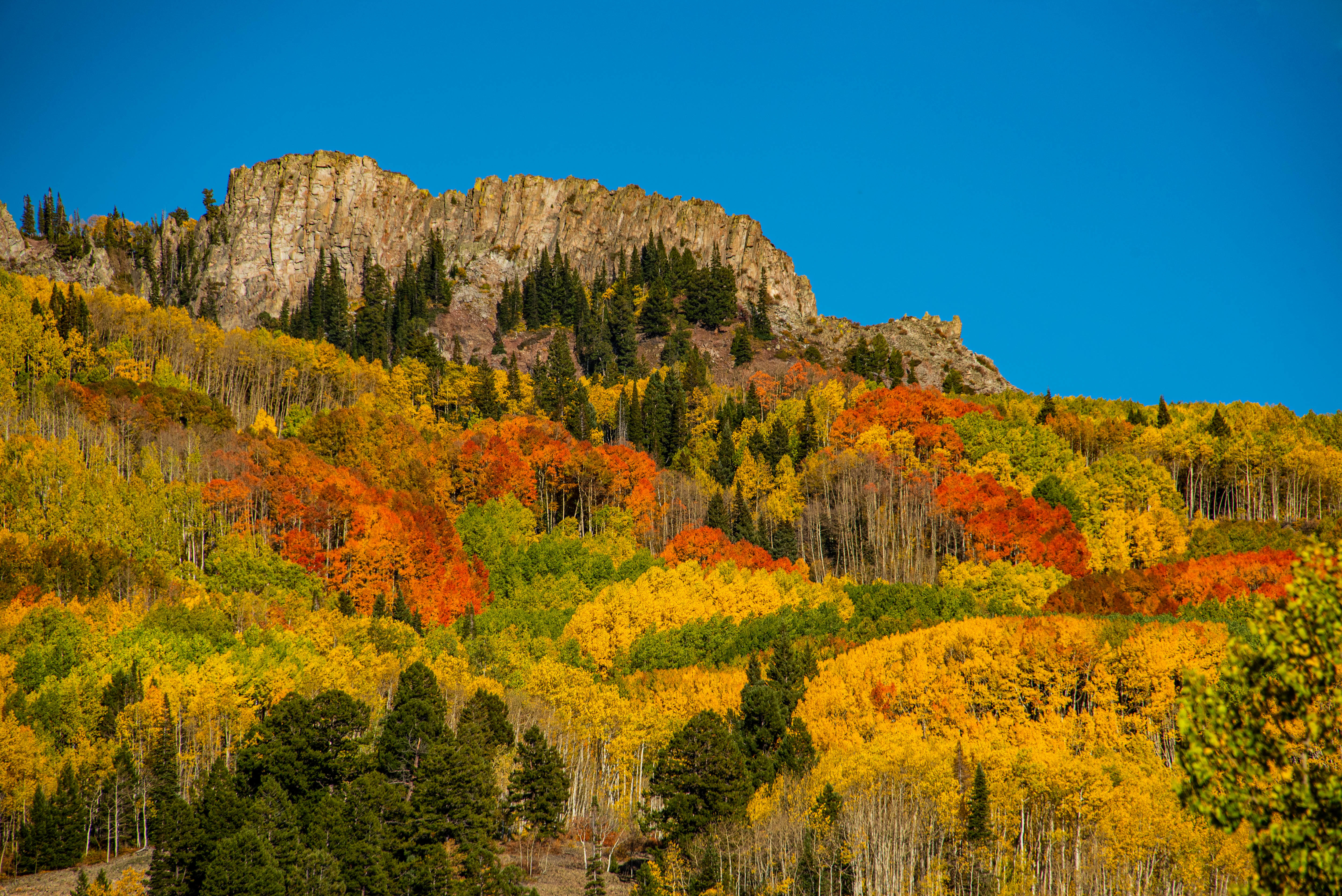 His favorite time to see fall colors in Colorado is the third week of September. His favorite route: The 30-mile drive on County Road 12 from the historic coal mining town of Crested Butte, which climbs over 10,007-foot Kebler Pass before heading down to State Highway 133. “It’s a really good, old gravel county road, but it is absolutely incredible in fall,” Dundas said of County Road 12. “The aspen trees are just spectacular.”

Many RVers with trailers leave their units at area campgrounds and use their tow vehicles to take day trips over Kebler Pass and to explore other scenic areas, said Michelle Hillier, who owns and operates the Uncompahgre River RV Park, an age-50-and-over park in Olathe.

The 49-site park with frontage along the Uncompahgre River is just under a mile above sea level, so the temperatures are also considerably milder than Kebler Pass, she said. 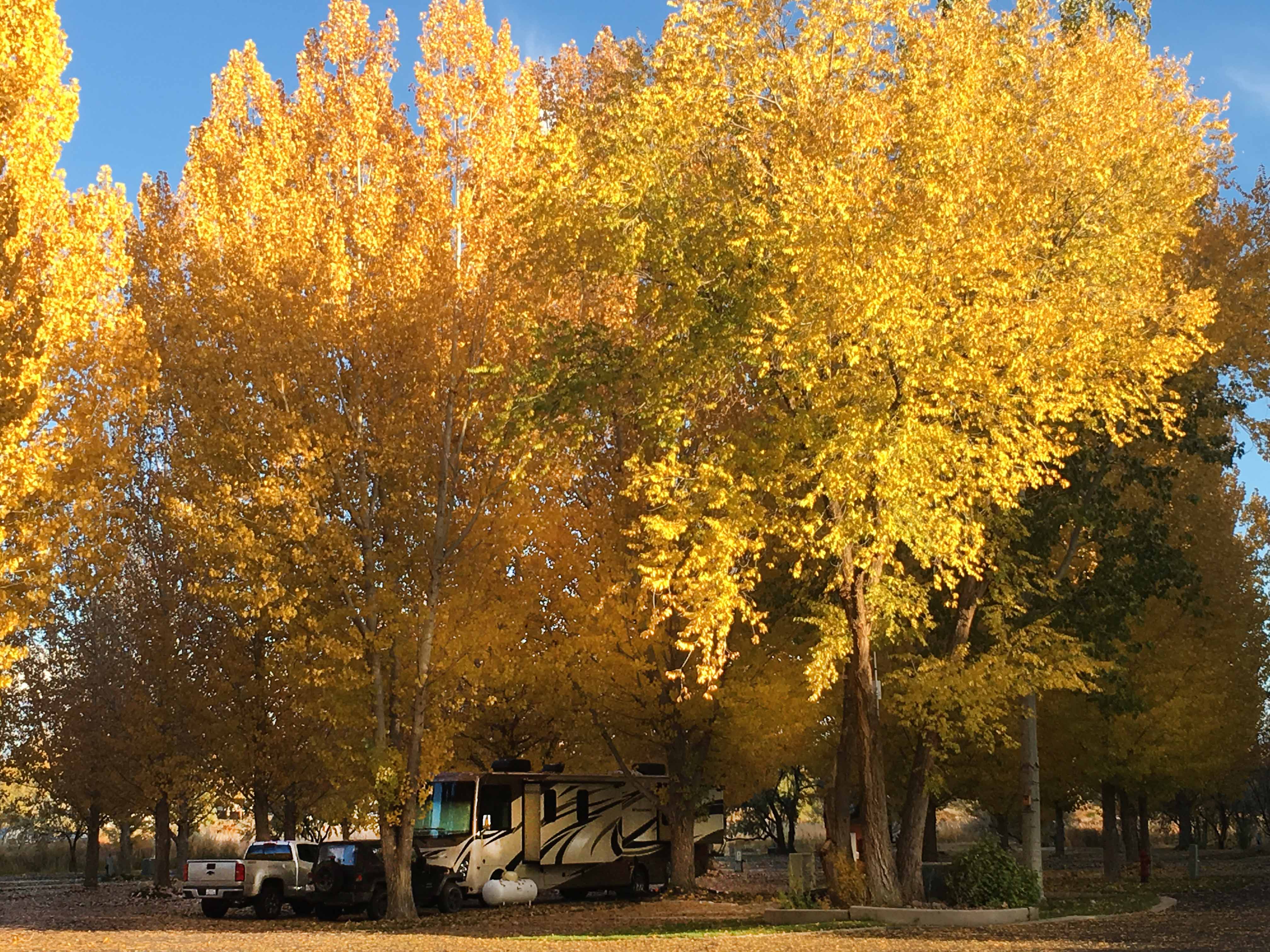 Other lower elevation campgrounds in the vicinity include Cedar Creek RV Park and Riverbend RV Park & Cabins in Montrose. Some travelers who want to be closer to the high country stay at Gunnison Lakeside RV Park & Cabins near Gunnison. The campground is a two-minute walk from Blue Mesa Reservoir, which is popular with fishing enthusiasts for its lake trout and wild kokanee salmon, which is also known as kokanee trout.

Whenever he’s looking for spectacular fall color, Dundas also likes to take State Highway 133 over 8,770-foot McClure Pass, which affords views of the backside of the famous Maroon Bells peaks near Aspen. The road leads to Carbondale, where you can catch State Highway 82, which passes through the 8,000-foot scenic resort town of Aspen before climbing up 12,095-foot Independence Pass.

“Some of the prettiest views in Colorado are along this route,” Dundas said. 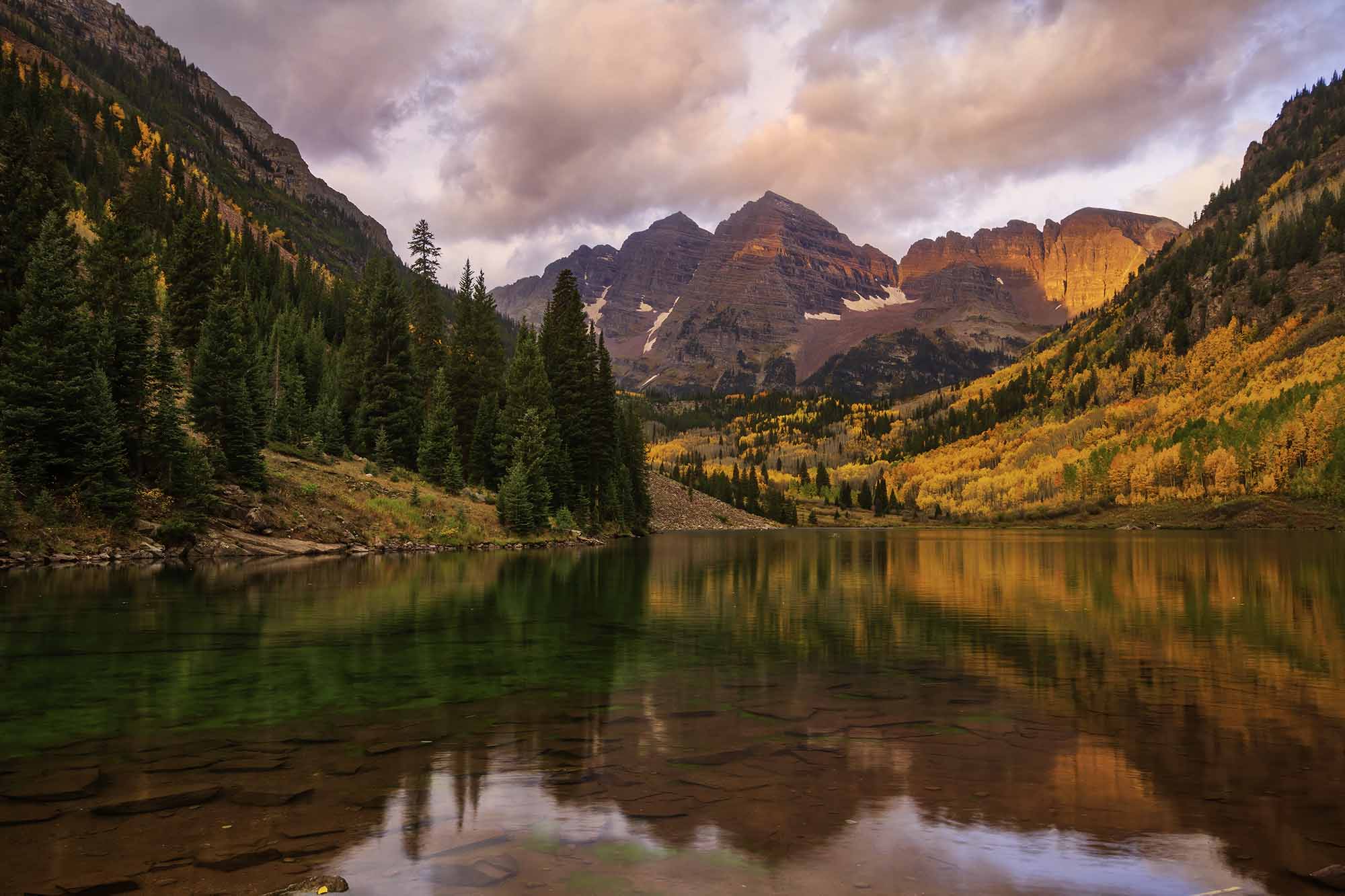 There’s interesting aspen-filled side trips along the way, too. For example, between McClure Pass and Carbondale, travelers can take County Road 3 to visit the tiny historic town of Marble, which is famous for its beautiful marble, which was used in the Lincoln Memorial as well as the Tomb of the Unknown Soldier in Washington, D.C. Marble is also where you’ll find the famous Crystal Mill and the Yule Marble Quarry. The Crystal River also flows near these historic structures, adding even more scenic allure to area, which serves as an entry point to the Maroon Bells/Snowmass and Ragged Wilderness Areas. 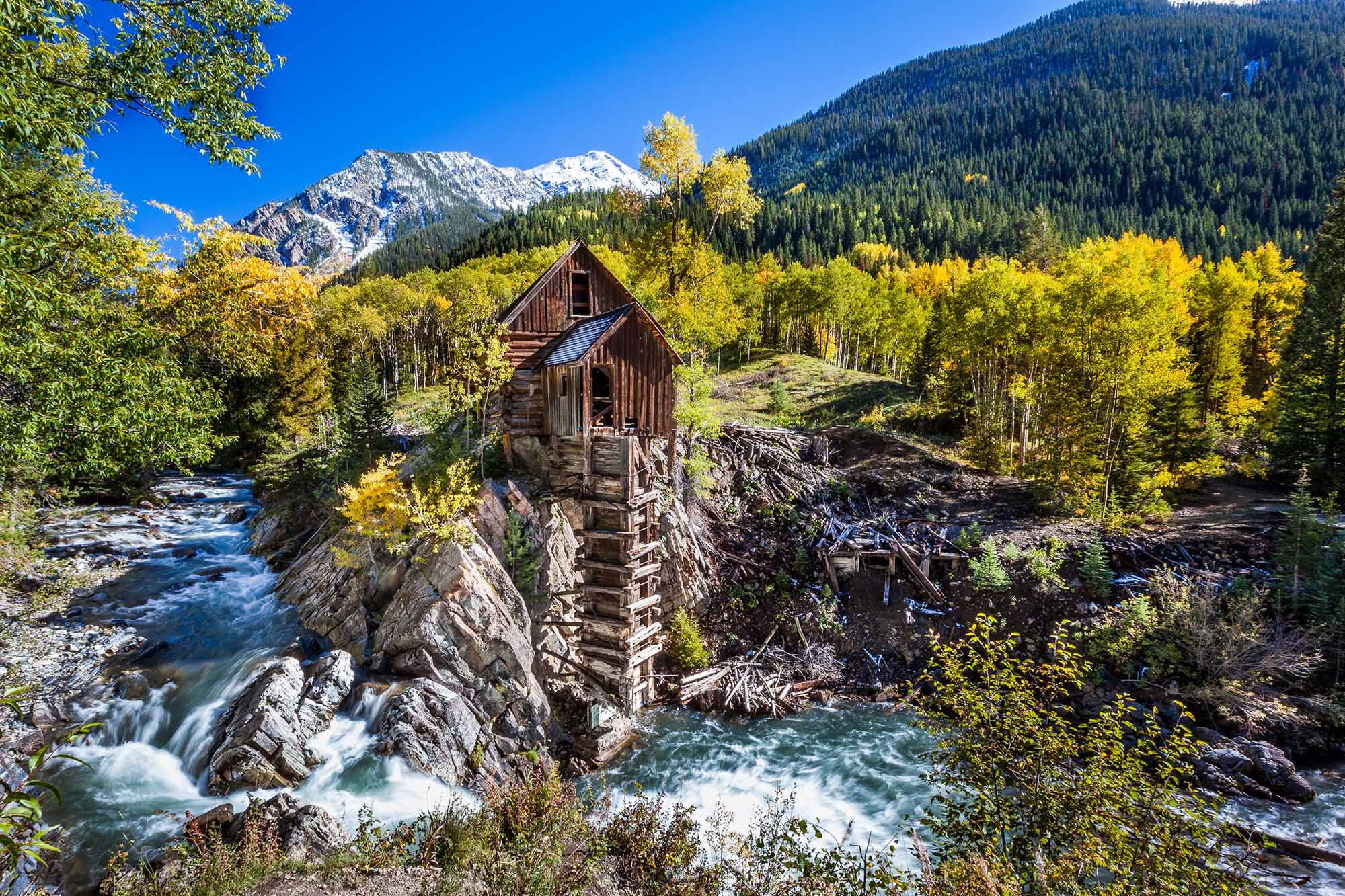 The abandoned Crystal Mill can be found between McClure Pass and Carbondale. Getty Images

Travelers who continue eastward over Independence Pass can follow State Highway 82 until it connects with U.S. Highway 24, which you can take south to Buena Vista, following the course of the Arkansas River.

Many fall color enthusiasts coming from Denver like to camp in the Buena Vista area, with Arrowhead Point Campground & Cabins being a popular base camp.

“September is the time to see the colors in Colorado,” said Joe Harbick of Arrowhead Point Campground, adding that the campground is close to Denver and many other attractions. “We’re two hours from Denver, two hours from Great Sand Dunes National Park. Aspen is one hour and fifteen minutes to one hour and thirty minutes away,” he said. 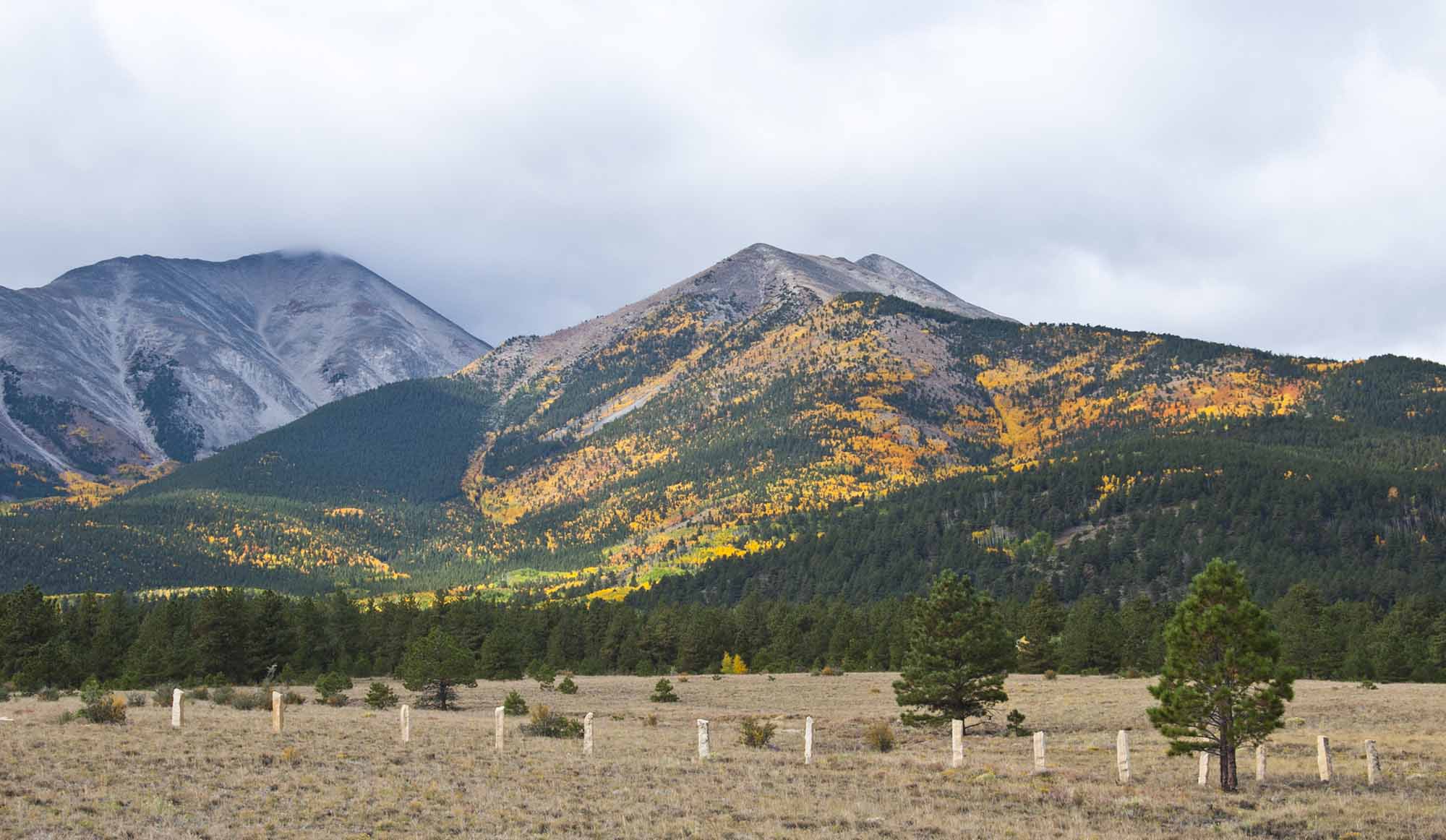 In southwest Colorado, for example, travelers love to take U.S. 550 from Durango to Ouray, which markets itself as “the Switzerland of America.” This 70-mile route, which is also known as the “Million Dollar Highway,” is widely considered to be one of the most beautiful drives in the United States. 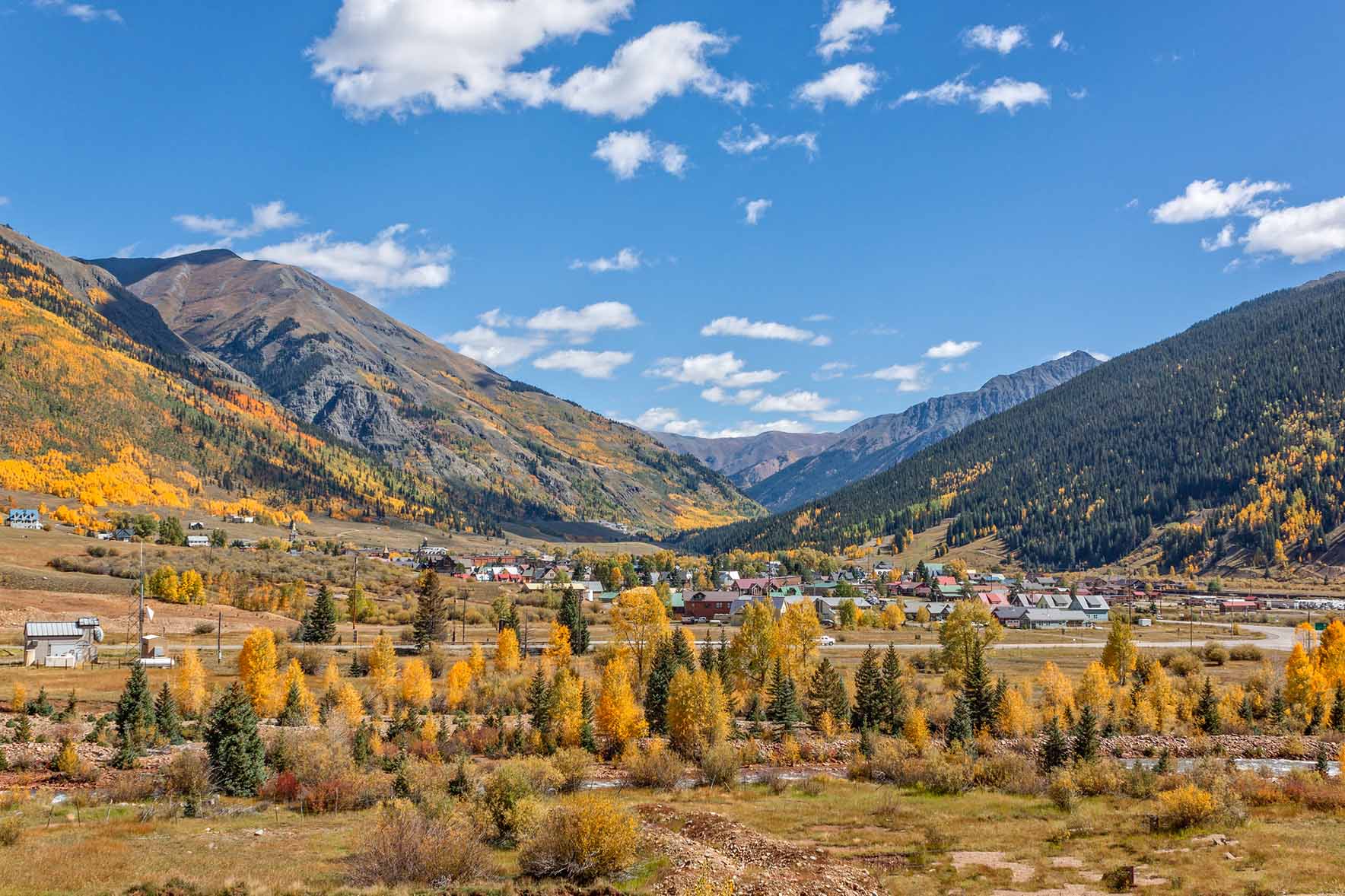 The town of Silverton during fall. Getty Images

ATV and jeep enthusiasts like to use Silver Summit RV Park in the historic 9,318-foot mining town of Silverton as their base camp for backcountry adventures. The 39-site park, which is open through October 15, even offers jeeps for rent, according to park owner Denny Martin.

Martin said the aspen trees in the Silverton area are typically at their peak between the 15th and 20th of September, but it varies each year. “It just depends on what Mother Nature comes up with,” he said. 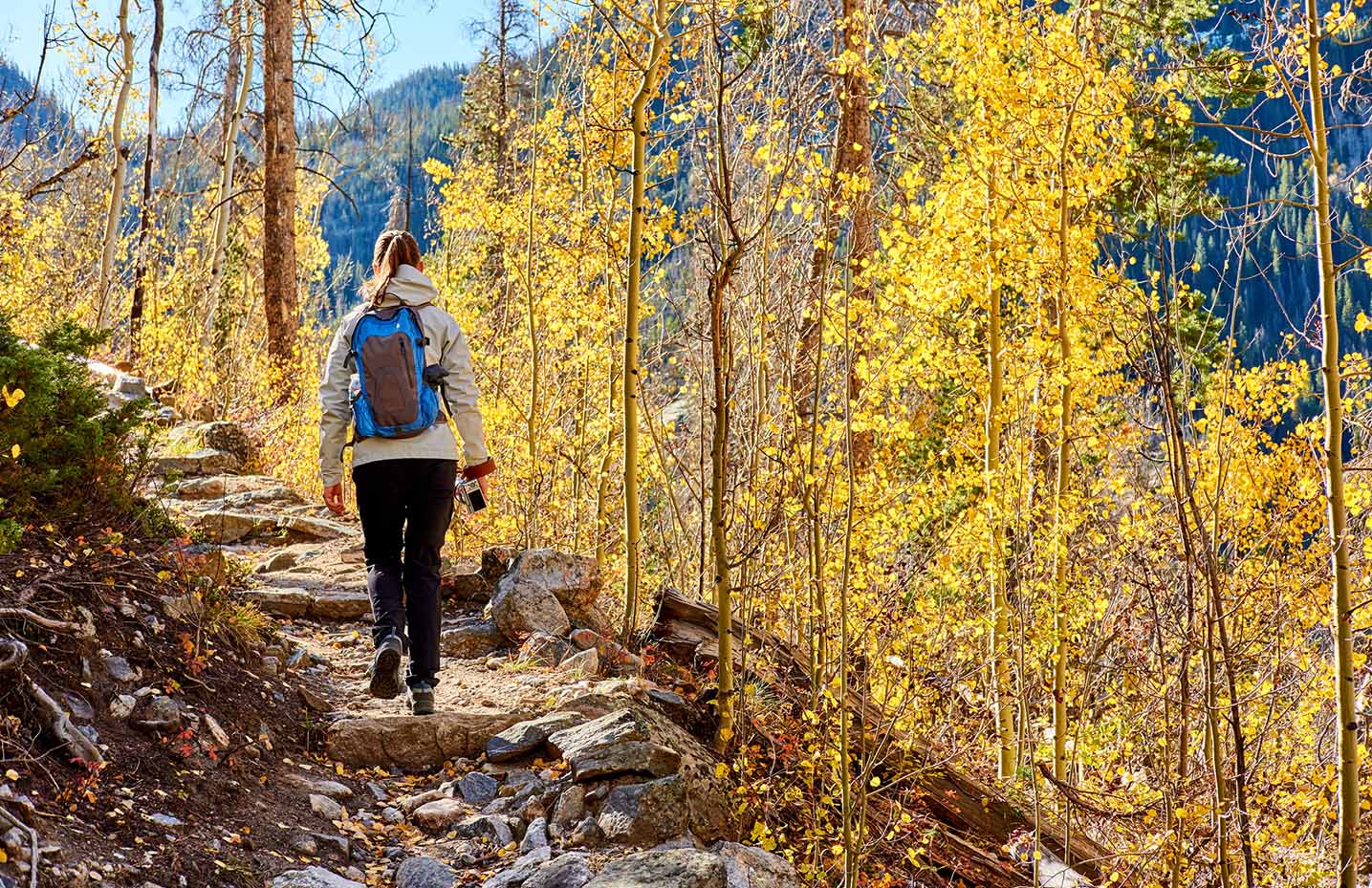 Privately owned and operated campgrounds outside of Rocky Mountain National Park also stay busy in September, especially on weekends as travelers head up into the high country to see the aspens turn into bright yellow with an occasional dash of red or orange.

“We get really good colors,” said Dick Romshek of Winding River Resort in Grand Lake. Scenic routes nearby with lots of aspen trees include County Road 41, which is between Grand Lake and Granby and Colorado Highway 125 between Granby and Waldon, which crosses the Continental Divide at 9,659-foot Willow Creek Pass. 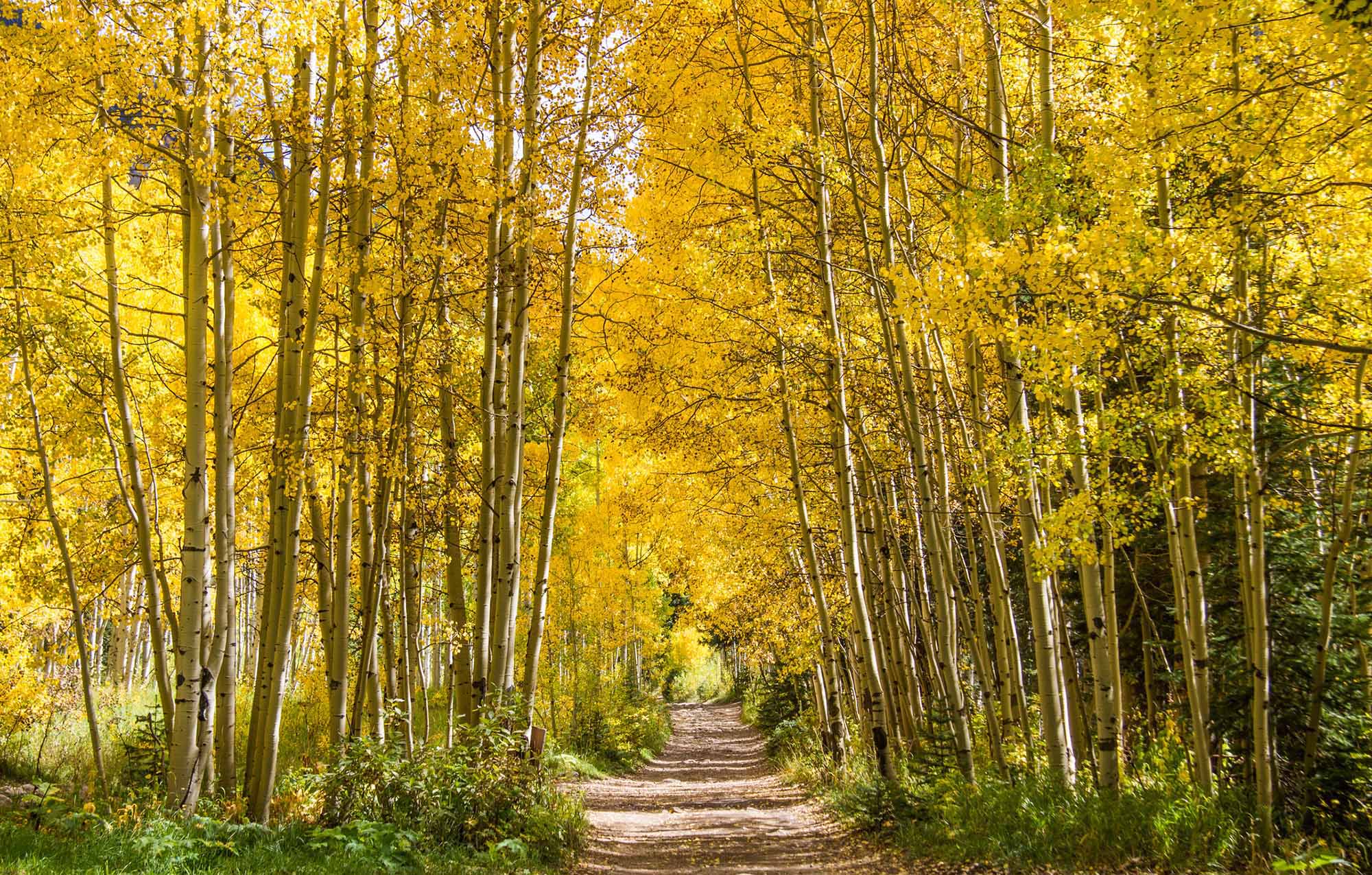 Spruce Lake RV Resort in Estes Park is another popular base camp for fall color enthusiasts. “We’re only a mile and a half away from Rocky Mountain National Park,” said Susie Young, who works at the 200-site campground, which also has four cabins for rent.

Visitors not enjoy beautiful fall colors, but hiking and jeep trails. September is also rutting season for elk, which are often seen in the area. “The elk are starting to come down from the high country right now,” Young said. 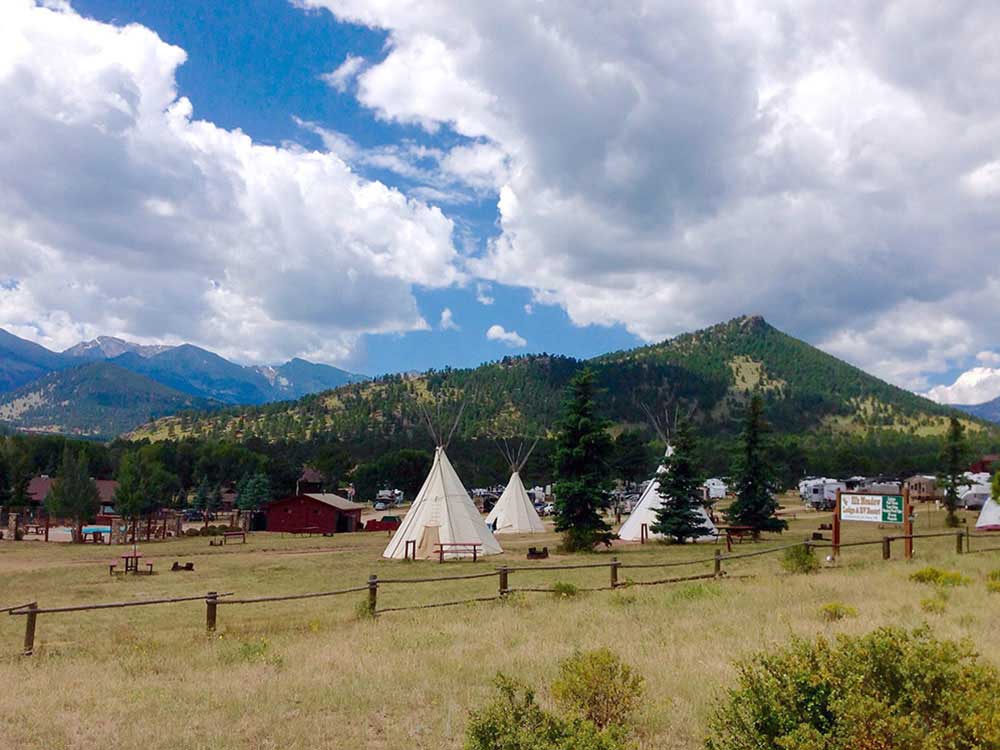 Park operators advise travelers planning fall color tours in Colorado to make their reservations in advance as many parks close at the end of September or early October with only a handful staying open through the winter season. Much of State Highway 82 also closes for the winter season. 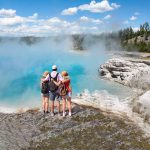 Stay and Save at a New Good Sam Park Near You Previous
Friendly Beaver Campground's Fall & Winter Are Uniquely... Next 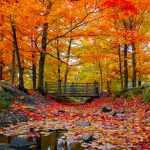