The third most-visited national park in the United States consists of 265,000 acres of placid mountain lakes and extreme mountainous terrain. The Continental Divide runs through the park, and the headwaters of the Colorado River are found here. With so many superlatives, it is hard to narrow down high points when discussing Rocky Mountain National Park.

Looking west toward the park from the Front Range of Colorado, one stalwart mountain stands out among the crowd. Longs Peak is one of 58 mountains in the state that rise above 14,000 feet (called 14ers). Its diamond-shaped face is immediately recognizable, but to scale this mountain takes some real grit, as hikers pass over tremendous boulder fields, pass through a granite “keyhole” and scale narrow rock ledges, all to be rewarded with a view for miles.

Created six years before Rocky Mountain became a national park, the Stanley Hotel in Estes Park is an ethereal attraction, bringing fans of the paranormal to the region. Built by inventor F.O. Stanley (of Stanley Steamer car fame) as a showcase for wealthy friends visiting from back East, the hotel was outfitted with the latest amenities for the time, including a hydraulic elevator and electric heat. But it never made a profit for Stanley. 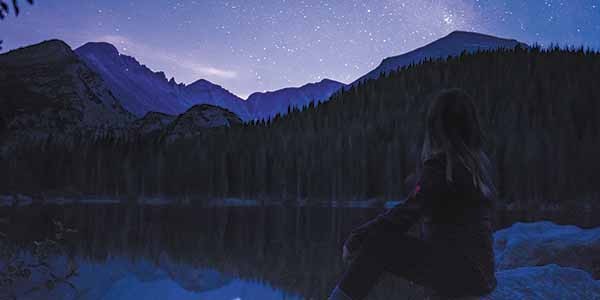 In the second half of the 20th century, the hotel fell into disrepair. By the time author Steven King and his wife spent a night there, the wrecking ball wasn’t far away. Then King’s nightmare in room 217 became the inspiration for his most popular book, “The Shining,” and bookings at the hotel began to skyrocket, possibly saving the structure and many local jobs. Today, guests at the hotel report seeing ghostly figures and apparitions. To the Stanley’s credit, management has embraced the spooky stories, offering popular evening ghost tours of the property.

Following Trail Ridge Road through the park from the east, drivers will descend into the charming town of Grand Lake. Once the destination for wealthy resort guests in the late 1800s, this area is dominated by an enormous mountain lake, where canoes, fishing boats and catamarans glide on smooth waters. Spend a day on the water dropping a line, paddling along the shore or tacking into the wind.

Hiking is the name of the game in Rocky Mountain National Park. Over 350 miles of trails challenge summer visitors, with elevations from 7,500 feet to over 12,000 feet. Winter hiking is also remarkable but mainly achieved with snowshoes or on cross-country skis.

Stargazing in the clean, crisp Rocky Mountain air is an eye-opening experience for the city dweller. High altitude mixed with no light pollution presents a perfect stage from which to count constellations. Join a ranger-led program or kick back at your campsite and enjoy the nightly display!

Rocky Mountain National Park harbors a vast mixture of large animals, making it one of the most popular parks for viewing wildlife. It’s not unusual to see elk, mule deer and bighorn sheep grazing along the road or on a backcountry hiking trek. Moose and black bear are a little shy, but can usually be found near forested areas.

Every year, tourists wait for the official opening of Trail Ridge Road. It is the only path that connects the east side of the park to the west, but it is also the highest paved road in the country, rising to over 12,000 feet. One can only imagine the amount of snow that falls at that altitude in a good winter, but snowplow drivers do an amazing job of bulldozing through it, usually around Memorial Day.

Paleo-Indians inhabited this rugged wilderness thousands of years before the Ute and Arapaho tribes hunted here. So remote was this land that it wasn’t explored until the 1820s, when Stephen Long ventured up to the Rockies, but never quite made it into the area now occupied by the park. With the discovery of gold in Colorado, miners poked around in the Never Summer Mountains, establishing towns that disappeared within 10 years because of the harsh conditions.

But early in the 1900s, a conservation movement was afoot, and by 1915 the region officially became a national park, protecting and preserving the pristine meadows, towering peaks and numerous species of wildlife. It wasn’t until 1932, however, that transportation could move from one side of the park to the other, when Trail Ridge Road was completed, connecting Estes Park and Grand Lake.

Most of the events in the park center around its five visitor centers. Beaver Meadows offers a gift shop and screenings of a 20-minute film on the park, while the Alpine Visitor Center, situated at 11,796 feet, offers educational programs about the alpine tundra climate. Moraine Park Discovery Center features a bookshop and interactive exhibits, and the Kawuneeche Visitor Center features a wide range of ranger-led talks and activities, particularly during the high season. The seasonal Fall River Visitor Center showcases wildlife survival exhibits and hosts regular ranger-led programs.