Choking or the Cafe Coronary

Imagine this, you are eating in a restaurant and your friend tells a joke while you have a mouthful of food; you try to laugh and instead you suck your mouthful of food down your throat and you can’t breath!  You want to tell your friends, but you can’t speak; your hands go to your throat, and you began to get lightheaded and sounds began to fade.  Your sight begins to dim, and you just want AIR!  The next thing to happen is you pass out.  This really happened to me.  The food was a piece of pie.  What saved me was I stood up and tried to go out a set of french doors because I mistakenly thought that the “fresh air” would help, and, as I became unconscious, I fell face first onto the deck outside.  The blow from falling dislodged the food in my throat.  I woke up, and, other than a cut above my eye and some impressive bruises, I was fine and alive!  But many people have the same accident, and many of them don’t have the lucky outcome I did.

What happened was I choked.  Choking while eating and drinking is so common it is called the Cafe Coronary.   When eating and talking and especially drinking, people tend to loose some of their protective reflexes.  They try to take too big bites of food or not chew well.  People wearing dentures are even more prone to not chewing properly when they drink.  In fact, in one sad case, a piece of steak was taken from the airway of a gentleman that was 11 inches long!

Choking is the complete blocking of the airway. If the person can talk or make sounds, you should encourage the person to COUGH and see if that will move the blockage.  But, if while eating, someone suddenly quits talking and grabs their throat and begins to act strange. Immediately ask if they can talk.  If they can’t speak, you will have to do what is called the Heimlich Maneuver.

There have been several slightly different versions of what to do, but basically, if the person is upright, you can try a blow to the back right between the shoulder blades.  Don’t just make it a little tap like your grandmother used to do either; you are trying to move the food that is blocking the airway.  If a few blows to the back don’t work, the Heimlich Maneuver (Named for Dr. Henry Heimlich) needs to be used.  You reach around the person and grab your other hand and pull them sharply in and upward midway between the bottom of the breast bone and the belly button.  If the person becomes unconscious, lower them to the floor and straddle their thighs and push the same place, mid-way between the breast bone and the belly button, then push up and in.  You can look in the person’s mouth and, if you see what is blocking the airway, you can try to pull it out.  Don’t stick your fingers in the mouth of a person unless you are sure you can help… sometimes they can bite down very Hard.

But, to be honest, the best way to learn this is to take a basic CPR class which should include how to do the Heimlich maneuver; if not, ask your instructor to show you. As an aside, the chest compressions you learn for CPR can also sometimes be used to open a blocked airway.  To be honest, any way you can open the airway is a good way!  The average person can only last 4 – 6 minutes without breathing.

Of course, the best way is prevention.  Do not take big bites, and chew your food well.  Be careful when eating and drinking.  You may want to save the drinking until after you have eaten.  And, in my experience, don’t let your friends tell jokes … at least not good ones (smile). 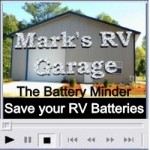 Dead RV Batteries Previous
RV'ing dull? Not with Firedude! Next

May Regions by Seasons — Kentucky and Virginia Come Alive