The passing of the $4 a  gallon gas price this week didn’t seem like so much of a threshold as a speed bump on its way to $5. The Iran controversy is driving Wall Street speculation on the price of oil–which already has pushed prices well over $100 a barrel that will probably stay there for some time to come–resulting in exponential rises at the pump.

It doesn’t help to rationally point out that the rise in the price of oil does not warrant such extreme escalation of pump prices, everyone is going to get what they can get out of it before the closing of the strait of Hormuz, the next war in the Middle East, OPEC raises oil prices,  and Wall Street speculators drive oil futures prices sky high and we all park our rigs.

Whew. As if we didn’t have enough to worry about. But whenever the price of oil jumps, the news ratchets up the hope that the political cavalry will ride in with more drilling for domestic oil, escalating natural gas to the fast track to get it to the market sooner, and pushing development of alternative energy such as solar, wind, geothermal, etc.

So I found this one little tidbit in the world of electric vehicles (EV) that sounded like it might have possibilities.  The problems with EV are multiple, including battery output limiting the vehicles’ range, cost of batteries, lack of charging infrastructure, dynamics limiting vehicle size, weight, and power, etc., and the desire of car owners to have the same or better features and passenger comforts that today’s gasoline vehicles offer.

An engineering challenge affecting range, weight, and power has been how to include air conditioning and heating in EV and how to cool the main battery. In an internal combustion engine (ICE) the compressor that runs the A/C is driven by a belt off the engine–which EV do not have. On hybrids, which do have an ICE, the current designs of belt driven A/C reduce the amount of charging that goes back into the main battery, create a drag on the engine (which are smaller than in regular vehicles), reducing efficiency and range.

A Japanese company called Denso has developed a new inline electric compressor, which will make its global debut on the Ford Focus Electric that goes into full production the first part of this year, as well as Fusion and C-Max Hybrids and Energi Plug-in Hybrids, also due in 2012.

The company states that the e-compressor will also cool the lithium-ion battery, enabling it to maintain optimnal temperature that in turn will improve EV range and battery life. This could be one of those parts of the whole EV development that helps it overcome its inherent problems and gain acceptance in the broader market–and make it more practical for us RVers that are hugely affected by both rising fuel prices and the need for range. Anyway, this looks like another development to keep our eyes on–unless the end of the world comes first.

Check out my website for RVing tips and destinations and for my ebooks, BOONDOCKING: Finding the Perfect Campsite on America’s Public Lands (or for Kindle version), Snowbird Guide to Boondocking in the Southwestern Deserts (Kindle version), and 111 Ways to Get the Biggest Bang out of your RV Lifestyle Dollar (Kindle version). 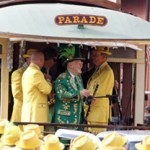