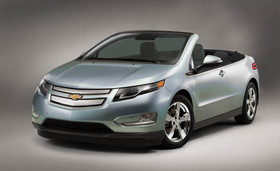 A lot of hype and optimism attach to press releases and news reports on not only the future growth of electric vehicles (inevitable) but also in what will be the jump start to propel them  fully into the mainstream.

Though electric vehicle market saturation is only in the single digits, we hear a lot about the Nisson Leaf and Chevy Volt (photo), and it seems that every other automobile and light truck manufacturer – including dozens of start-ups around the world – are jumping on the bandwagon and trying to catch up with the market leaders.

For RVers, we can hope for development of electric dinghys that will re-charge from the main RV engine while towing or from a plug-in at campgrounds and public re-charging spots while on the road. Light trucks must have enough torque to pull a small trailer or carry the weight of a small motorhome.  And of course, range and cost are currently the problems.

Hybrids, where you have the power and range of a supplemental gasoline engine such as in the Prius and Volt, are the logical interim step to full electric like the Tesla or Leaf. But they will not become a hit with most mainstream car buyers until a battery–or other energy storage system–can deliver on reduced size, lighter weight, lower price, and a range of at least 300 miles.

Several future battery alternatives being investigated at LBL include lithium-sulfur and lithium-air, which have the potential to generate much higher energy densities than Li-ion technology; thus fuel electric cars for longer distances.

In short, the lithium–sulfur (Li-S) battery is a rechargeable galvanic cell, which is relatively light and having an internal density similar to water. Sulphur is also significantly less expensive of a raw material than lithium, which offers inherent cost advantages.

In comparison, the lithium-air (Li-air) battery is a battery chemistry that uses the oxidation of lithium at the anode and reduction of oxygen at the cathode to induce a current flow. Li-air batteries have a much higher energy density than conventional Li-ion batteries, since they utilize the oxygen in air, eliminating the need for a Li-air battery to store fuel (oxygen) at the cathode.

How long this will take to becoming a viable commercial solution is a guess at best, and include factors such as whether the new batteries are environmentally-safe to dispose of or recycle at the end of a minimum 15-year lifespan.

ORNL is working on a related battery also, the Examiner continues:

ORNL has been more focused on a key battery component, the anode, where electricity is extracted in the system. The anodes of most current commercial lithium batteries are composed of graphite, which is a form of carbon. However, scientists at ORNL incorporated a special form of the compound, titanium dioxide, into the anode instead, which significantly enhanced performance. In recent tests, at the same level of current, it took the ORNL battery only six minutes to be 50 percent charged; thus generating a five-fold improvement over a graphite-based lithium-ion battery in the same period.

ORNL’s new battery has the potential to be used in a plethora of heavy-duty applications, beyond just hybrid electric vehicles including power grids and energy storage systems for wind and solar power generators, and this institution believes the best-case scenario would thrust it onto the market within five years.

It is an interesting time as we develop electricity as a vehicle power source–6 minutes to recharge a battery to 50% is impressive–and ween ourselves off foreign (read OPEC) oil.

Check out my website for RVing tips and destinations and for my ebooks, BOONDOCKING: Finding the Perfect Campsite on America’s Public Lands (or for Kindle version), Snowbird Guide to Boondocking in the Southwestern Deserts (Kindle version), and 111 Ways to Get the Biggest Bang out of your RV Lifestyle Dollar (Kindle version).

5 Tips When Visiting Texas Previous
RVers perk: Trade out your help for free camping in national... Next 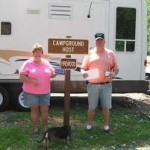