In 1979 stationed at Travis AFB in N California I bought a 1972 Datsun pickup with a camper shell for $1600. The idea was to use it as an overnight and weekend fishing/camping vehicle. I was due to retire in 1981 and thought it would be a good start since I planned to stay in the area. I put in 4 inches of foam rubber on the floor and installed a plywood shelf over the wheel wells to behind the cab. I had a place to store equipment and place for two to sleep at night, I loved it.

In early 1981 my marriage was breaking up and I had been offered a promotion to stay active in the USAF for another two years, on top of that if I stayed in I was going to get an assignment to Germany. My mind was a mess trying to make sense of all these life changing scenarios. I decided I needed a break, I took 30 days leave and loaded up the truck and headed east, camping 2-3 days per stop my way through Nevada, Idaho, Montana, Washington State, Oregon and back to California. By the time I got back my mind was straight and I reupped and went to Germany as a single guy again.

I took the truck with me to Germany. I had a blast with it. Went all over Europe sometimes camping sometimes not, to Soccer games, Military Football, Basketball, and Softball games all over Germay. But the big trips were two weeklong fishing trips to Lake Caspe’ Spain. Photos are attached of that trip, Caspe’ near Zaragoza is/was full of Large Mouth Bass good ole american type. The Spaniards do not fish for them, only us americans to knew about the lake did. Six of us took two vehicles my truck and a Volvo station wagon, we loaded up the truck with gear and about 30 cases of German beer and rotating two guys sleeping in the Volvo, two driving and two riding shotgun we drove stright through from Germany across France into Spain. The fishing was spectacular, camping with six people who got along wonderful, fastest weeks of my life were those two trips. A hotel owner in Caspe froze our fish for us and in return we had our farewell dinner at his Hotel, Paella for six, great stuff. Sad day it was when we loaded up and headed back, but memories for a lifetime. Note in the pictures the plywood we used for cleaning fish is the wheel well shelf from my camper, I never quite got rid of the fish smell or blood, but I didn’t care, it was history.

Submitted by Bruce Boyd of Tucson, AZ as a part of the RV Centennial Celebration “Share Your Favorite RV Memory” contest. 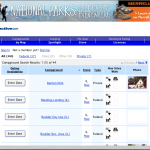 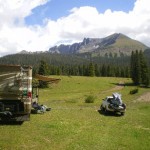