Some of you may recall a post that ran at the end of last year in which I discussed our family New Year’s tradition of listing accomplishments of the past year and goals for the new. We traditionally spend the week between Christmas and New Years vacationing at our little cabin in the northwoods of Wisconsin. In the days preceding the holiday, each family member makes a list of each and after eating a delicious dinner, we take turns reading, first accomplishments, then goals.

Our little cabin in the northwoods

We do not read our own lists, however. Each family member reads those of the next oldest member of the family. Our theory in structuring it this way was that the accomplishments of older siblings might provide motivation for the younger ones.

We have been doing this for more than a dozen years and I think it has worked well. Accomplishments of the children might involve such things as being named captain of the Dance Team or making the “A” Honor Roll. Terry’s and mine often involve traveling and health, such as keeping off that extra five pounds and working out regularly. Goals tend to be focused on the school year and extracurricular activities for the kids; travel, spending and health for Terry and me.

Last year I wrote a post listing our RVing accomplishments and goals. I won’t rehash our old accomplishments, but some of our goals for 2011 included trying to take at least one trip on which both of our younger children (Ryan, 20 and Meghan, 18) would accompany us (something that did not happen in 2010), replacing the steps on our camper which had been damaged by hitting a large rock in the road the previous summer (that could have been MUCH worse!), to pace ourselves more moderately on our trips (this one was more for me than for Terry), to plan a trip for “just the two of us” after we dropped the kids off at college in August and to enjoy more incredible vistas and see more of this beautiful country.

I am proud to say we have accomplished four of the five!

Our "New" Durango has a much easier time pulling our camper!

We did not manage to plan a trip for just the two of us because in September our oldest daughter graduated from the Palmer Chiropractic School in San Jose, CA and we flew the entire family out to celebrate with her. I’m thinking we will be able to arrange a trip for two in 2012, and for many years after that! We were just thrilled to get both kids to travel with us this summer!

In thinking ahead for 2012, I just want to say “this is the year!” We have our house listed for sale and are both planning to “retire” from our 40 hour a week jobs this year, for different reasons. Me, because the economy is suffering so in our small city that it is no longer possible to pay our expenses with my counseling practice so I would prefer to spend my time doing something else, either camping or earning money writing or teaching. Terry, because he is now 67 and has been employed in the field of social work for about 40 years and is in need of a change and more leisure time. This has been a good year, but a tough year for both of us.

We will not yet be RVing full time . We will, however, be relocating from our current home in the Midwest to Taos, NM, which we plan to use as a home base to do a great deal more traveling than our schedules previously allowed. We have been making lists of places to return to for longer periods of time when our schedule permitted more than a two-week trip every year. We adore our beautiful national parks and at the top of our list is spending several weeks at Glacier National Park, which we have visited for two short visits.

With that preface, here is our list of RVing goals for 2012:

Hopefully we will be able to accomplish all of these goals. If not, I know we will have fun trying! Wising you a Happy New Year and Happy Travels!

To read more about camping adventures to take with your family, browse RV and campground directories at Woodall’s online bookstore. 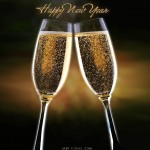 Happy New Year Previous
From Dealer Joe or John Doe? Where will you get your... Next