It was May of 1955, and Keith had just finished his four-year stint serving his country in the far-east. It was time for him to make major decisions that would affect the rest of his life!

A job, college, and his brown-eyed sweetheart were on the top of his list – how could he fit all of these things together?

To go to college he needed to earn some money to add to his mustering-out pay. His brother came to his rescue and hired him to work in an uranium mine at the top of Uncompahgre Plateau out of Grand Junction, Colorado. He could live in a tent or the bunkhouse!

Ah! Yes! But – what to do about that brown-eyed girl in Nevada? He asked her to marry him – she said, Yes! They set the date for September – they would work until December and start college in January. Great!

Woops! He forgot a very important detail – where would they live, she couldn’t stay in the bunkhouse? If they were going to be able to go to college they couldn’t afford to buy a fancy trailer to haul up that mountain. What to do?

Keith’s brother to the rescue – one more time. He knew of a trailer near the mining camp that could be had for next to nothing! Keith looked it over and wondered if his bride to be had what his mother called – stick-to-it-ness. She had helped her grandmother cook for hay-men and she worked hard on her job at the drugstore – he would explain to her that it was just for three months! After seeing the trailer, she would probably be too nervous to leave – driving down that granite ledge would certainly be too much for her! She hated heights!

He had heard of couples who lived in a tent when they were first married – but that was back during the depression! He decided he had faith in her – so he told his brother, OK let’s do it!

When the brown-eyed girl heard that they would live in a trailer for three months, she thought that would be cozy and just fine! It took several letters before she learned that the trailer was an original design and made from an airplane that had crashed. Fortunately for Keith he didn’t have a camera with him to send her a picture! Even in her imagination she could not have envisioned the result of this renovation!

What an experience to share with their future children! The bed was wall to wall in the nose cone. There was a small closet – the door to the closet folded down into a table when it was opened! A small butane heater (without a pilot light) was across from a built-in bench (seating when the table was down) and a butane hotplate were something out of the space age to the bride – she was frightened of the butane! At 9,000 feet it was cold enough to keep the milk outside and there was water in a barrel that had to be primed.

It took the brown-eyed girl 50 years before she agreed to purchase a 5th wheel – my how things have changed!

Submitted by Corinne Shumway of Gold Canyon, AZ as a part of the RV Centennial Celebration “Share Your Favorite RV Memory” contest. 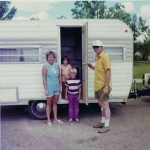