It’s funny you should ask for these stories about our first time. I wrote about ours for my blog at FMCA about a year agot this week. Here it is :

I have some personal rules for owning an RV. My wife and and I have a motorhome. Any place it says “motor coach” substitute trailer or fiver, it doesn’t matter the rule still applies.

Keep your temper on a very short leash. Or, when owning a motor coach, patience is not only a virtue but a necessity.

If you are the type of person who always wants to be in control of your circumstances and are uncomfortable when things are not perfect or not even close to it, you will have trouble adjusting to the motor coaching lifestyle. Things are going to go wrong whether you are an old-timer or a newbie. There are preventive measures you can take, but only God can stop anything and everything bad from happening.

Let me break it down for you.

All may not go well when your coach is at the repair shop because of A. B. or C. or any combination of the three. So this means you have to be patient with all kinds of people and circumstances. You have to be patient with drivers (and that includes yourself), passengers (and that includes your spouse), dealers, repair techs, manufacturers. You get the picture. Just be patient, because it can turn out better than you think.

An Example of A:

The day my wife and I bought our first, slightly used coach it was a rainy, cold Valentine’s Day in 2005. We had signed the papers a few days earlier and now it was time to do our walk through, or PDI, or something like that. We started with the roof, and the tech told us about the satellite dish that came with the coach. I looked hard for it but I didn’t see anything that looked like a dish to me. I had no plans to order satellite service for the coach, but if it is supposed to have a dish it should be there! I started to say something, but I didn’t want to appear stupid. Plus, the tech was in a great rush due to the rain.

We were told about the sewer system, the fresh water system, the electrical connections, the generator, the storage, and the hitch. It went on and on. I was cold, wet, hungry and needed to find a bathroom. We went inside the coach and learned about the dash controls, the radio, the video system, the leveling system, the voltage monitors, the battery disconnects, the batteries, the power switches for all the appliances we could not use at the same time because it was 30-amp service.

Next, he shows us how to crank up the TV antennae and follows that with the manual satellite dish controls. The whole time we are inside, I am thinking about the satellite dish that is standard, that isn’t on the roof, and I still need to go to the bathroom.

I am getting impatient and am just about to complain when he shows us the washer and dryer combo — the one that we had no idea was in the coach. On the day we signed the papers, we were told we could get a washer-dryer for 900 bucks and we said no thanks, maybe later. I looked at it and at the happy expression on my wife’s face and stupidly said “Where did that come from?” The tech told us that it originally came with the coach, but the first owner didn’t want it. Right after he traded it they put the combo back in the coach. The salesman didn’t know it was there, so it was too late to charge us for it now, so consider it a bonus. At that moment I forgot about the dish that didn’t exist … well, I didn’t forget, it just didn’t matter anymore.

An example of B: (The Same Day!)
So, with my wife leading in the car, I started up our new-to-us 36-foot Bounder, with no SAT dish, but a stump where it was supposed to be, and eased it along with the included washer-dryer combo out of the dealer parking lot (point A). I had no idea what I was doing. I should tell you that I had never driven the coach, or any coach or even been a passenger in one before. I was scared to death.

I took it down U.S. 17 and missed my first turn. Great, I have not had it five minutes and now I have to do a U-turn. I managed to turn around in an abandoned gas station lot, made the right turn toward home. About 20 minutes later I am in front of our house and am looking at our tree-lined driveway (point B.) trying to figure out how to get this really long and wide box on wheels to go where I want it to go.

I make a right turn and realize that that it is pretty tight between the trees. Diane is standing out in the rain and yells at me that I am not going to make it without clocking the tree on the left. I stop, grit my teeth and sit there for a minute or two. Okay, it will not go in the driveway, so what do I do.

Diane comes into the coach. She knows me very well. She quietly suggests that we can park it in front of the house, off the road and hire someone to take down the tree the right away. That sounded like a good plan to me. So I backed out of the driveway, back up the street and then pulled it off the road right in front of our house and sank into the mud. At least I didn’t hit the tree.

The tree is now gone. A tree service removed it. The rig is stocked and we are on our first weeklong trip. We are off to the mountains of Virginia, a wonderful place called Otter Creek on the Blue Ridge Parkway.

It was not a bad trip up to the campground. We drove up U.S. 460 and stopped at a gas station to fill up the rig. This took a bit of planning. The gas tank opening was behind the license plate at the end of the rig. I had to be quite careful about where I filled up. It was very easy to block the flow of traffic in and out of the gas station, not to mention I ended up parked in front of two pumps for a long time.

I have found out you have to be patient at gas pumps. Most will not allow more than a $100 purchase. With a 100-gallon tank, that means using my credit card three times to get my tank filled. It doesn’t bother me now, but when we first became RVers, it ticked me off. But that is not the worst thing. Sometimes you just can’t get the gas to go into the tank. The nozzle just shuts off. I found that if you hold it at the three or nine o’clock positions gas will flow, but you cannot leave it unattended and that makes your hand tired.

After we filled up (and this was the first time, a bit of a shock even at 2 bucks a gallon) we continued on up the road. I drove carefully the whole way and it was a rather uneventful, pleasant but longer than I expected trip to the campground.

Otter Creek is a national park campground. No connections. No water, no electricity, no sewer. It does have a dump station. Oh, one other thing it does not have: more than one site that a two-slideout 36-foot-long coach will fit into. I pulled into the first one, a pull-through that looked long enough. It was slightly curved but I wiggled the coach into it.

I got out to check everything and realized I could not open the main slideout because of the trees. I looked at a site in front of the coach but slightly off to the right. The trees were not as tight around that site. It looked like it would work out quite well. I was quite anxious to get parked because I was running out of daylight.

I got behind the wheel and started the engine. Diane asked me if I wanted her to guide me out of the site. “Why? The other site is just over there, I should be fine.” So I took off, drove about 34 feet and made a slight turn to the right. It is too bad that I was in enough of a hurry that I couldn’t take Diane’s advice. It’s also too bad that I didn’t see the camper sitting outside his Airstream who was frantically waving at me as I made my turn. I didn’t see him, just like I didn’t see the tree stump I ran over with foot 35 of my 36-foot coach. The rear end of the coach went up in the air and dropped hard.

“What was that?” I asked of no one in particular.

“I think we hit something.” Diane said.

I pulled into the new spot, got out and looked at the coach. Everything seemed okay, except I noticed the gutter spout was missing off the rear of the coach. Not a big deal. I also noticed there was a wood-colored streak down the middle of the last basement door. And then I saw it! A fist-sized hole in the bottom of my end cap. I was sick. I had wrecked my new coach.

“Diane, look at what I have done!”

The man who was sitting in front of the Airstream walked over.

“I was trying to warn you that your tail was swinging over that stump,” he said.

The man looked at the coach’s boo-boo and said something that, well, I didn’t know how to respond to: “You might as well bang up the other seven corners and get it over with!”

Then he laughed and slapped me on the back and said, “Welcome to the club … it happens to everybody. Don’t let it spoil your trip. Good looking coach you have here.”

All I could see was the hole in my end cap. I did find the gutter spout, so it wasn’t a total loss.

Just so you know. We met some really great people on that trip and had a good time.

We own an 08 Holiday Rambler Vacationer XL UFO, a Workhorse Gas Pusher.

Submitted by Derrick Parker of Portsmouth, VA as a part of the RV Centennial Celebration “Share Your Favorite RV Memory” contest 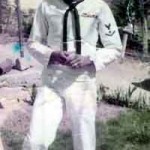