How Not To Start RVing

Right here in Center Harbor in the spring of 1985, Roberta and I decided that my parents had, had so much fun RVing, that we wanted to try. We scouted the papers for something we could afford. We found an old late 60’s era 12′ tag-a-long for $1,000. We were thrilled! We brought it home and Roberta said “I can make the inside look homey if you can spiff up the outside”. We decided to try and get it really nice before my parents returned from their winter RVing in AZ and surprise them. We did not care for the idea that it was twin beds separated by the “john”, but would live with that for now. We wondered where we would empty the bucket that we guessed had to be placed under the “john” seat and if we needed a special bucket, because when we opened the cover to the “john” we looked at the ground. It was like an old fashion ‘one holer’. Robert cleaned and scrubed, she made curtains and lined draws. We bought dishes and silverware, bed cloths and linen and I polished the outside to a tee. I painted the tongue and replaced the gas bottle as no one would refill it. I checked the tires and the tread look good in spite of a few age cracks on the side walls.

We were proud as a a peacock, as they say, when my parents arrived back in town and could not wait to show them. They smiled as they approached the rig and we thought they were pleased. Once inside my Dad said; “How big is the holding tank and how much water will she carry?” We asked what a holding tank was and said we would bring spring water in jugs to drink. He suggested straight away that the tires be replaced as he could tell by the numbers on them they were over 10 years old and had been baked in the sun far too long. He was serious until he ! opened the “john” door then lifted the lid. He summoned my Mom and for the next several minutes they laughed themselves silly. They said, get rid of this thing as soon as possible and let us sit down with you before you buy another. They explained a few basics and we soon realized the mistake we had made. We took a deep breath, accepted our mistake and vowed to never do something like this again without talking to someone that knows.

Within a few days we had sold it for $900 and agreed to deliver it to the new owner about 40 miles away. He wanted it to place permanently in the woods in the northern part of the state as a hunting camp. He loved the curtains Roberta had made!

My parents taught us about holding tanks and water tanks. They taught us about tires and hitches and the impotance of brakes. They showed us how to equip a rig with light weight dishes (acrylic) and to use old plastic bottles to house all things that come in glass to keep down weight. They even gave us a snug sleeping bag built for two with one side heavy the other light and a zip in sheet to avoid making a bed.

Today after RVing in a motorhome until in their 80’s, both parents have passed on. Roberta and I have had 4 more rigs and have just ordered our 5th, a 32 foot 5th wheel after putting about 40,000 on the current 30′ foot 5th wheel. We have an 18 year old bird that loves to RV and she and the current rig and we have visited 46 of the lower 48 states. And most important of all we have helped many friends and relatives get started in RVing and we always start with the tale of our first experience.

Submitted by Robert “Bob” Heath of Center Harbor, NH as a part of the RV Centennial Celebration “Share Your Favorite RV Memory” contest. 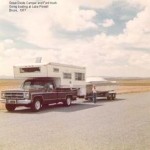 Lock the Refrigerator Door... Or Else! Previous
Bottoms Up! Next