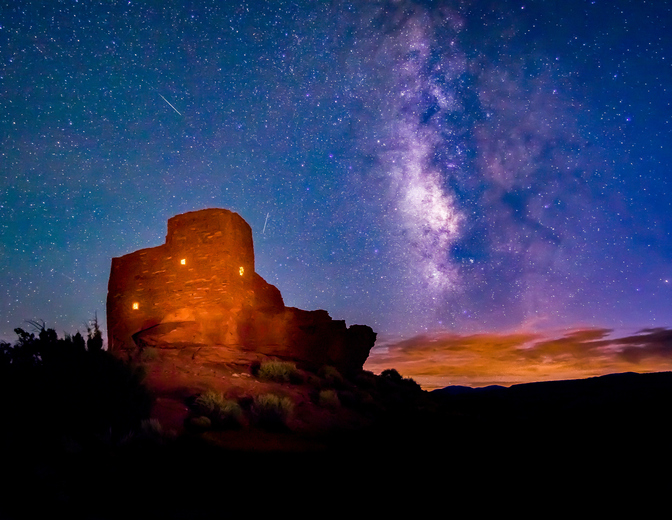 Take stellar snowbird trips in the heart of the Grand Canyon State.

Snowbirds descending from the Pacific Northwest, the Plains states or the Midwest into central Arizona for the winter have several routes to choose from, though most often they take the most direct.

Typically, my father, the archetypal planner, plotted out the exact mileage and average driving time to haul his trailer from home in Pennsylvania to San Diego, California, where he spent the winter near my brother and his family.

He knew practically to the minute how long it would take him to make the journey, starting each day at a prescribed time and stopping each evening at a pre-determined campground. He conducted the trip as if it were an organized time/distance rally. It drove my mother nuts, but it worked for him.

I know that there are still some of you out there who travel like that today, admit it. Get to the destination in the most efficient and timely manner for great snowbird trips! Damn the torpedoes, full speed ahead! Maybe this year, rather than choosing the most direct or fastest route, try a different way, with side snowbird trips and stopovers on the way. (I can see a cold sweat breaking out on your forehead). So it won’t be too debilitating to your efficiency genes, I’ll suggest an easy alternative to start with.

Instead of focusing on your destination of Phoenix and its environs, fix your sites on Flagstaff, only a couple of hours driving time to the north. You will pass through some scenic, high country, pine forests before dropping down to the scrub, juniper and rabbitbrush of the high plateau along Interstate 89. On your way, you could even stop off at the Grand Canyon for a couple days.

Twenty-seven miles north of Flagstaff, a two-lane paved 35-mile loop turns east into Wupatki and Sunset Crater National Monuments, and back to 89 just 12 miles above Flag — an easy, non-stressful route. 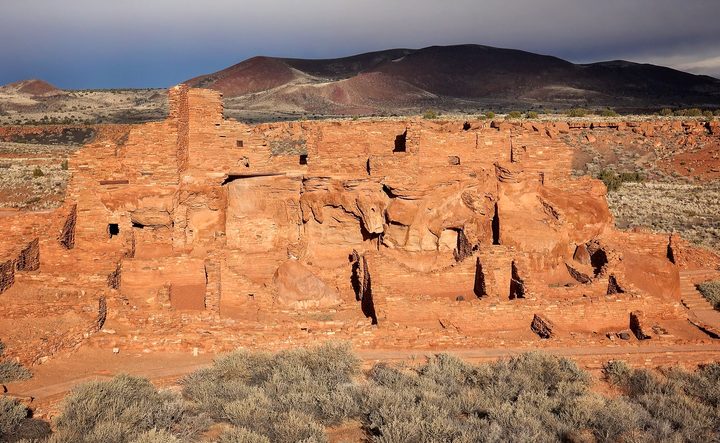 Until 800 years ago, a far-reaching Native American pueblo civilization spread across this high volcanic plateau, raising beans, corn and squash. These people built intricate structures using the abundant uniform slabs of red sandstone stacked like bricks and reinforced with mud mortar atop the natural rock outcroppings, a solid foundation to build upon. The rock mass elevated the pueblos above the deteriorating effects of erosion, acted as a passive solar heat source, absorbing heat from the sun in the daytime and providing warmth through the night. The structure also offered the inhabitants a wide view across the landscape to see approaching visitors and traders.

Present day Hopi, the descendants of these former inhabitants, refer to them as Hisatsinom, meaning “people of long ago.” The Navajo word, Anasazi, and the Pima or O’odham word, Hohokam, also refer to these ancient peoples. The Spanish used their own words in calling them Sinagua (sin=without, and aqua=water).

Hundreds of archeological sites are scattered across the plateau, and several have been uncovered and preserved so visitors can see how these early dwellers lived. Markers along the road indicate short access trails to the pueblos — Lomaki, Citadel, Doney Mountain, Wupatki and Wukoki.

At its peak occupation during the 1100’s, the Wupatki Pueblo contained almost 100 rooms and housed about 200 residents. The pueblo also contains a central circular amphitheater (kiva), and a ball court, thought to have religious as well as sportn  and social uses.

Like many pueblos, the Hisatsinom built Wupatki by accretion. They built the first rooms into the bedrock, and as the population grew, they added rooms around and above. Inner, older rooms, some used for storage, were ventilated with a series of small openings in the walls. They carried ponderosa pine support beams, for second stories and roofs, from a considerable distance.

Near the ball court, a unique geologic feature called a blowhole, consists of a large network of small underground cracks. When air pressure below ground builds up greater than that above, air blows out of the hole, often with considerable force. When the below ground air pressure is less, the air is reversed and sucked in. The cold air coming out of the hole smelled strongly of wet rocks and rich earth. Two little girls held their shirts out over the flow to cool their tummies.

By the mid 1200s, Wupatki was mysteriously abandoned. The ranger offered the theory that it was for both social and religious reasons. “People throughout history have gathered, dispersed, then gathered again, for a variety of reasons, which are seldom mysterious or sinister. Perhaps due to overpopulation or drought, they may have migrated into the Rio Grande Valley and the Little Colorado River area and became Zuni and Hopi.

“There are two schools of archaeological thought,” she continued. “The old school is purely scientific. Everything is based on physical evidence. But there is a new school that includes oral history as part of the study, which includes the Hopi legends and stories, and the songs and ceremonies that date back to these early days.”

Add this excursion to your list of snowbird trips. 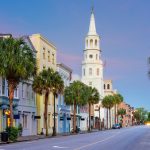 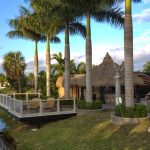