Single Mom Hits the Road with Guts and Gusto

1990. I was a single, reasonably sane mom of nine adopted kids with the hair-brained idea of a road trip from Houston, TX to Montana.My cousin, head paleontologist of a dinosaur dig, had sent a vague invitation to visit the dig. Little did he expect my dino loving kids to jump at the chance.

We bought a used Coleman Pop-up, hitched to it to our 13 passenger van, loaded the eight-year-old’s wheelchair on top, the two month-old’s backback and carseat, along with tents for the boys, propane stove, Dutch oven, coolers, groceries, and one duffel bag each. Journals, cheap cameras, and a surprise box for good behavior took the place of electronic games.

Memories of our great adventure include flat tires in dust storms, rain storms with lightning followed by a rainbow, the four boys locked in an out-house in a deserted Wyoming state park, hail in Yellowstone, snow in Glacier NP, digging dinosaur bones in Montana, using the latrine in a genuine teepee, bathing in an icy stream, the son who handcuffed himself to the overhead seatbelt, and crossing the Canadian border without Passports or identification for the kids. (The officers decided that no one except a mom would travel with any kids but her own.)

To complete our educational trip, we visited the Tyrrell Museum of Paleontology in Drumheller, Alberta. With baby on my back and pushing the wheelchair, I lost my passel of kids among the T-rex skeletons and had to ask the guards to round them up.

I admit there where times I threatened to leave some of the kids along the side of the road, but our three week, thousand mile camping trip was a highlight of their young lives.

I’ve written about this trip and additional roadtrips with my youngest son and gradsons to Alaska.
“Grandma’s on the Go” and “Grandma’s Ultimate Road Trip, Texas to Alaska” are available on Amazon.

Submitted by Carol Weishampel of Beaumont, TX as a part of the RV Centennial Celebration “Share Your Favorite RV Memory” contest. 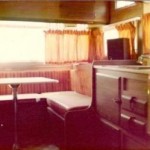