OUR PHOTO OF THE YEAR! (Plus: How to Photograph Lightning)

Recently someone asked us to showcase the best photo we’d taken this year. While choosing a “best” is always tough, one favorite that came to mind was this image of a spectacular lightning storm on the Gulf of Mexico. We took this photo in Florida, after being chased off the beach by an ominous chorus of rolling thunder. Since many of us carry nice digital cameras (http://goo.gl/5SuZio) when we explore nature, here are some tips on how to photograph lightning strikes. 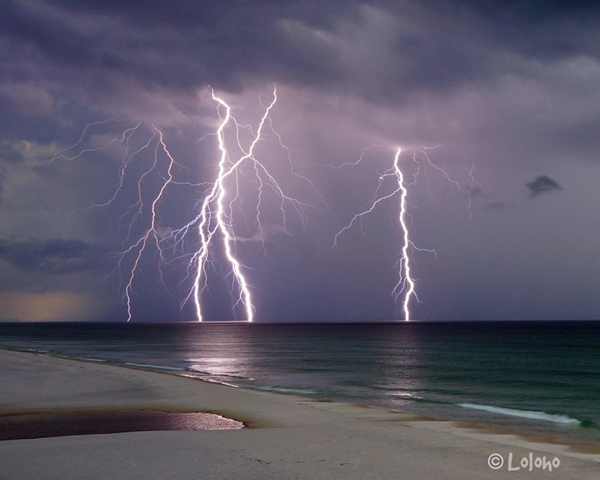 This photo was taken with a mirrorless compact camera, while using a tripod. Got a camera? You can do it too!

First, a few assumptions. We’ll assume you have either a DSLR or mirrorless compact camera that allows for the adjustment of aperture, shutter speed, and ISO. It’s best to fly in manual mode with this sort of shot. Of course, we’re also assuming that you are familiar with the basics of photography, especially the impact of aperture and shutter speed on the image capture. If those terms are foreign to you, read on anyway. You will probably glean the fundamentals, or at least have your appetite whetted for more.

STABILIZE YOUR CAMERA
The first step is to make certain your camera is rock solid stable. We typically use a tripod for this purpose. Even a cheap tripod is better than no tripod. (Click here to view some bestselling tripods.) You don’t need to spend a lot of money on a fancy tripod to take steady shots. The cheap tripods usually get the job done.

APERTURE
You want to open the camera aperture so as to allow a sufficient amount of light to hit the camera sensor. But not so wide as to compromise sharpness of the image. We find that apertures between f5.6 and f11 work best. These typically maximize sharpness of the image, which can be especially useful when cropping the image. After all, you never know exactly where the lightning will appear.

ISO
Reduce ISO to a low value such as 100. This will reduce noise in the resulting image.

COMPOSITION
Obviously your shot needs to include generous portions of sky, but you should also consider the surrounding landscape for interesting features. For example, in our own lightning shot, we benefit from the reflection and glow of the lightning flashes in the Gulf and in the nearby lake. In many respects, those reflections are what make this a special shot.

TRIAL AND ERROR
You probably will not get a perfect lightning shot on your first try. While this may sound obvious, it’s important not to get discouraged by your first results. There’s an element of trail-and-error here. You set the parameters of the camera, shoot, review, adjust, and shoot again. You may take dozens or even hundreds of shots before you get the keeper that you want. This highlights a beauty of digital photography: it’s easy to delete the forgettable files. Take as many shots as necessary, and toss the ones that fail.

TIME LAPSE
Another technique for photographing lightning involves the use of time lapse. Many cameras today come equipped with time lapse features that automatically trigger the shutter on a timed basis. Since you never know exactly when lightning will strike, you can set your camera to automatically take photos at regular intervals. For example, set up your camera with a slow shutter speed, and do a time lapse for several minutes. Eventually, as the camera automatically takes photos, the timing will be fortuitous — and you will capture a lightning strike.

RVing With The Grandkids Previous
RV Travel Checklist Next