Best Beaches and Stunning Sights on the Oregon Coast 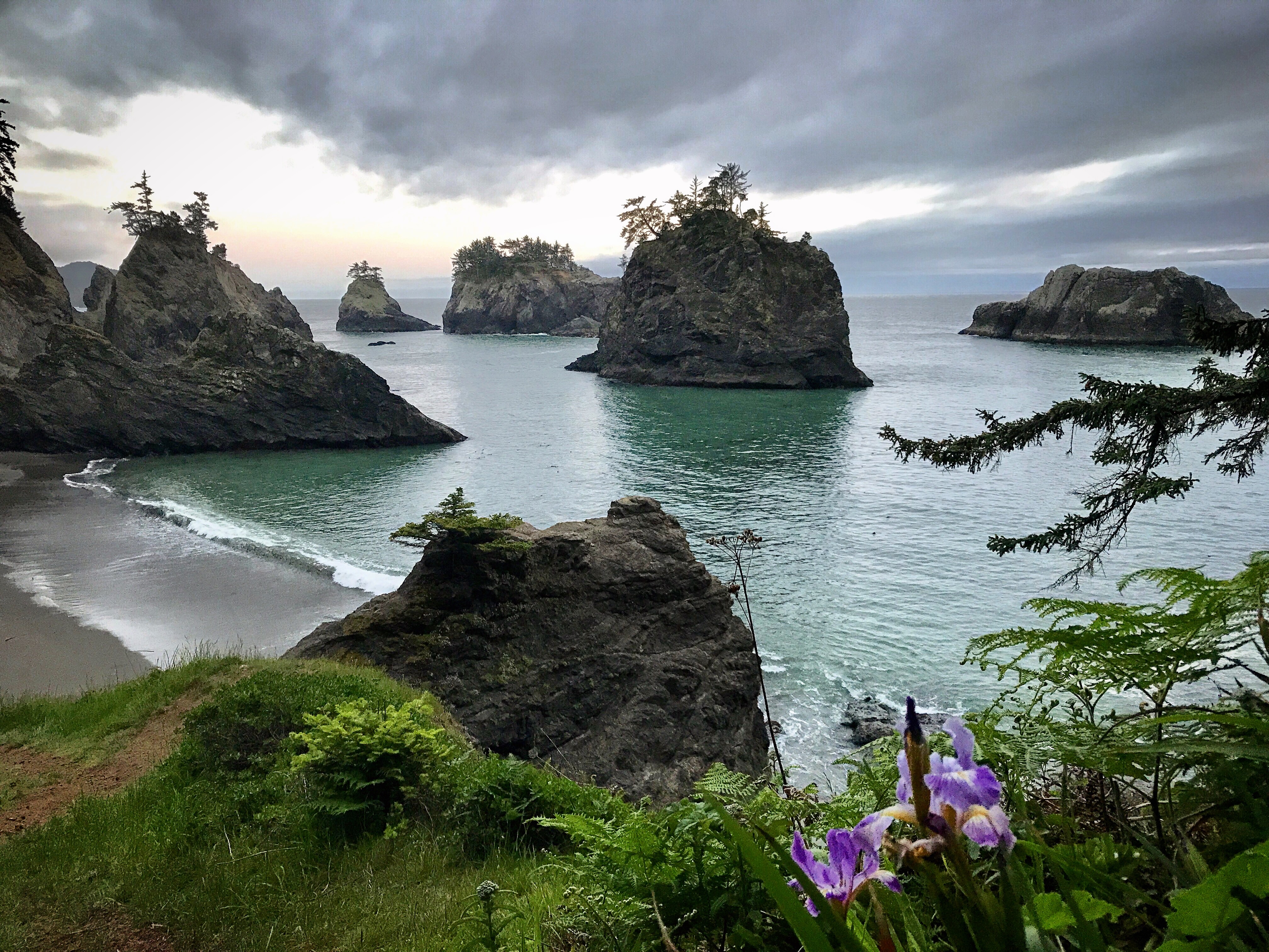 Without a doubt, the Oregon coastline is one of the prettiest and most geographically diverse shores in the country. With majestic sea stacks, expansive sand dunes, colorful tide pools and rugged cliffs that dive into the ocean, the entire 363 miles of pristine shoreline stretches from the California border near Brookings, all the way to the mouth of the Columbia River in Astoria. Aptly named “the People’s Coast,” Oregonians and visitors alike can enjoy the entire stretch of Pacific Ocean Coast due to legislation making it public land several decades ago. Starting South and heading north, here are some of the most impressive stops along the way. 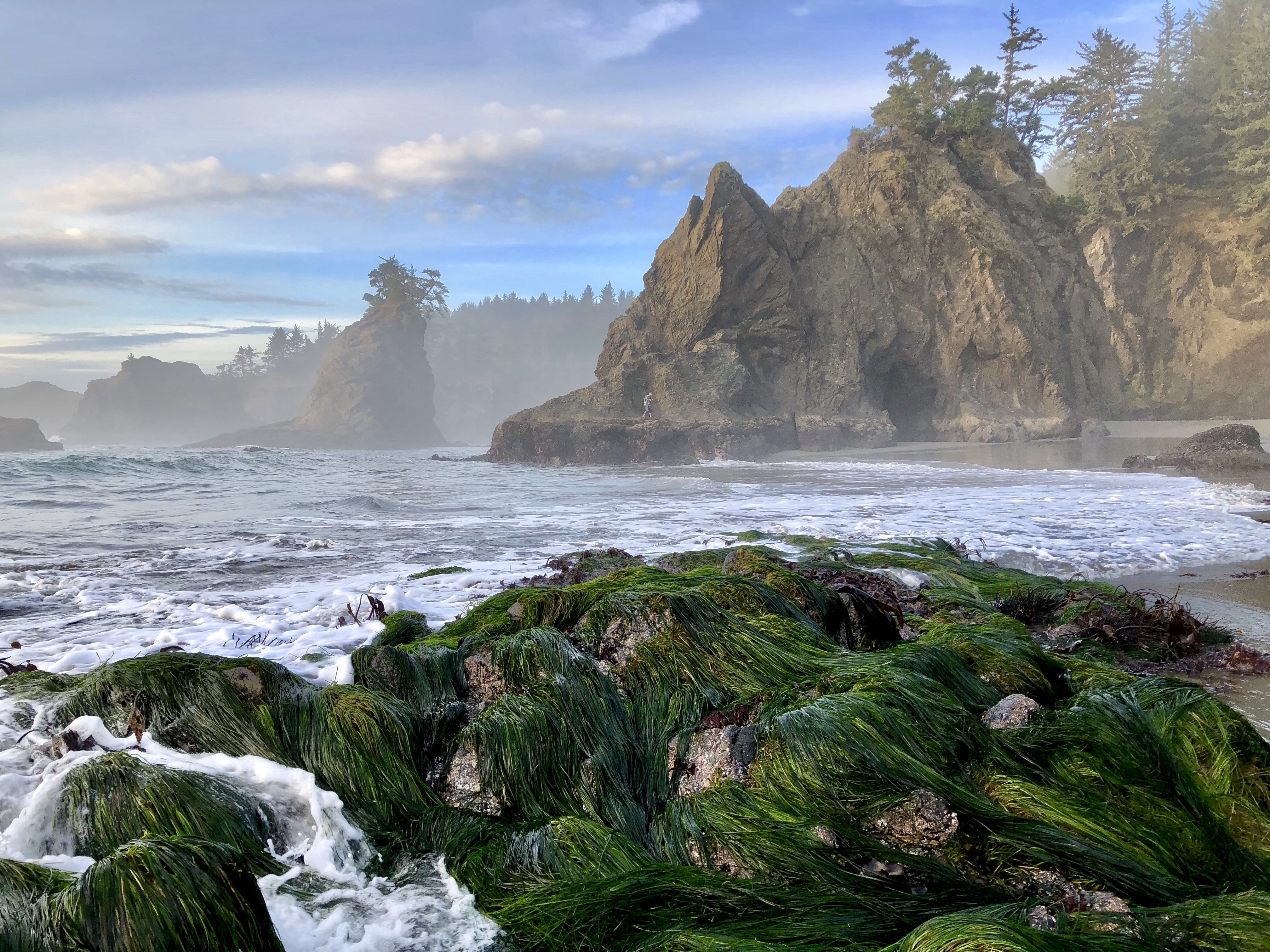 Perhaps the most photogenic stretch of shore can be found along the Samuel Boardman Scenic Corridor, between the town of Brookings and Gold Beach. Known for its impressive sea stacks, natural arches, and rugged beaches, in this area, you’ll find waterfalls cascading down onto the beach, sea caves lined with anemone and starfish, and best of all, it garners a fraction of the crowds you’ll see up North. Harris Beach State Park is a favorite for camping families. But for those who enjoy a bit more solitude, Lone Ranch Beach and Whales Head are nice alternatives. For those who enjoy hiking, one of the best trails on the coast starts at Whales Head, where the hike leads you past fern blanketed forests, ocean vistas, and a natural bridge at a place named Indian Sands. For those wanting to escape the full sun or cool ocean breeze, Brookings is home to Oregon’s only Redwood groves, which are found along the Chetco and Winchuck Rivers. Additionally, just across the border, you can enjoy the Jedediah Redwoods and the Smith River and take the scenic drive on Howland Hill Road that meanders through the old-growth forest. 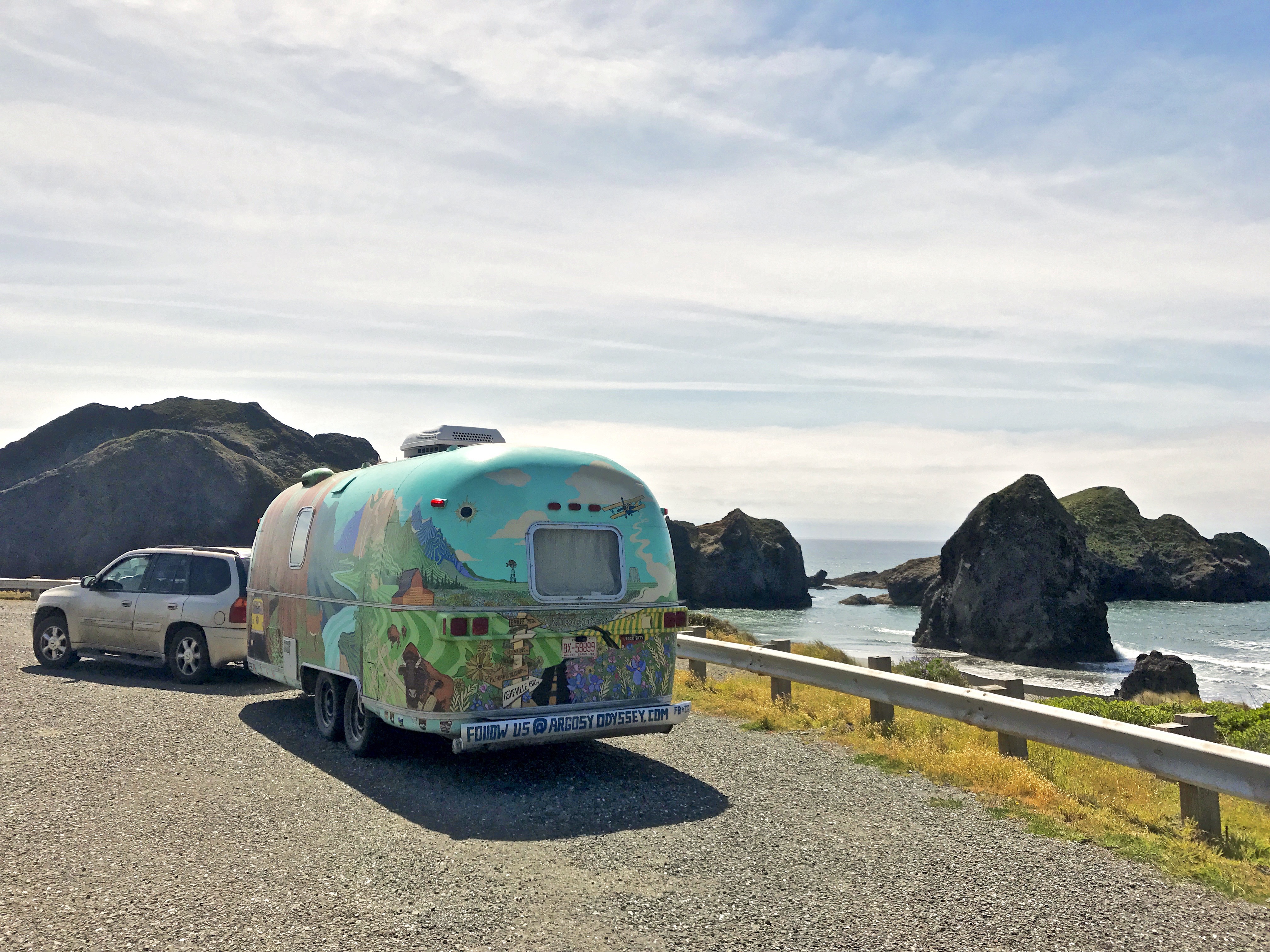 Heading north, the next stop is Gold Beach, the mouth of the wild and scenic Rogue River. In the mid 19th century, gold was discovered in town and prospectors moved to the area in droves. To this day, folks pan for gold on the beach, and rock hounds search for agate and jasper. For those who enjoy fishing, king salmon and Dungeness crab are popular catches in the area. If you forget to bring your gear, you can buy fresh local seafood at the docks or hire a private charter to take you fishing. For a scenic river trip, Jerry’s Rogue Jet Boats offer rides upstream where you’ll traverse through canyons and rapids. Next door to Jerry’s, and adjacent to hwy101, is the moss-covered sunken ship, Mary D. Hume, a steamer built in 1881 that holds the record of the longest-serving vessel of the Pacific Coast. 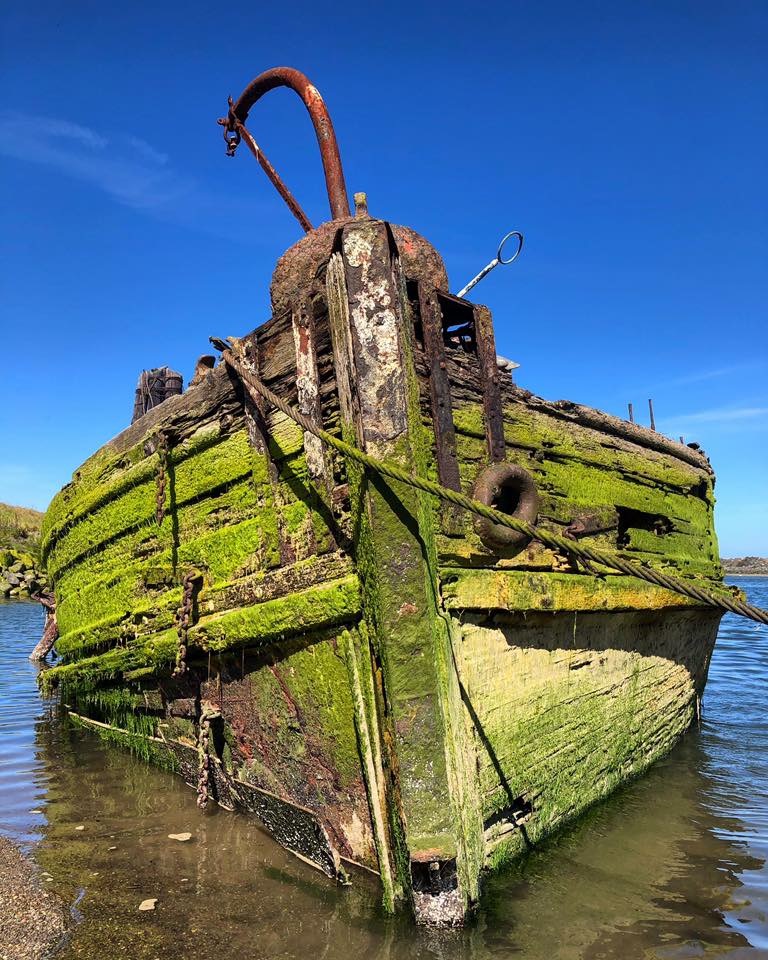 Continuing the journey along Highway 101, you’ll pass Humbug Mountain and the kitschy Prehistoric Gardens- a fun stop for young families.  Close to the town of Port Orford is Floras Lake State Park, which features majestic cliffs reminiscent of ones in Wales or Western Ireland and the hike to Blacklock Point, one of the most rewarding hikes along the Southern Oregon Coast. Soon after leaving Port Orford, you’ll approach the town of Bandon, a popular coastal destination with plenty of dining and shopping options. Additionally, Bandon happens to be Oregon’s cranberry capital, producing nearly 500,000 barrels annually. While visiting, drop by Bandon Brewery or Bandon Rain Cidery and enjoy some local flavor, like the Cranberry Squall. One of the biggest draws of the town is the “Circles in the Sand” festival, a summer-long art event helmed by Denny Dyke and his many volunteers that create intricate labyrinths and shapes on the beach.

Circles in the Sand Festival in Bandon @catebattles

Just up the road from Bandon, is the town of Coos Bay, the last destination along the Southern Oregon coast and highway 101’s most populous city. For those who enjoy gardens, make sure to visit Shore Acres State Park, where you can enjoy the flower gardens during the warm months and their impressive holiday light display during winter. The park, which is perched on top of a sandstone cliff,  is also a fantastic place to watch storm surges as waves dramatically crash into the rocks below, with sprays rising to heights of up to 300ft in the air. 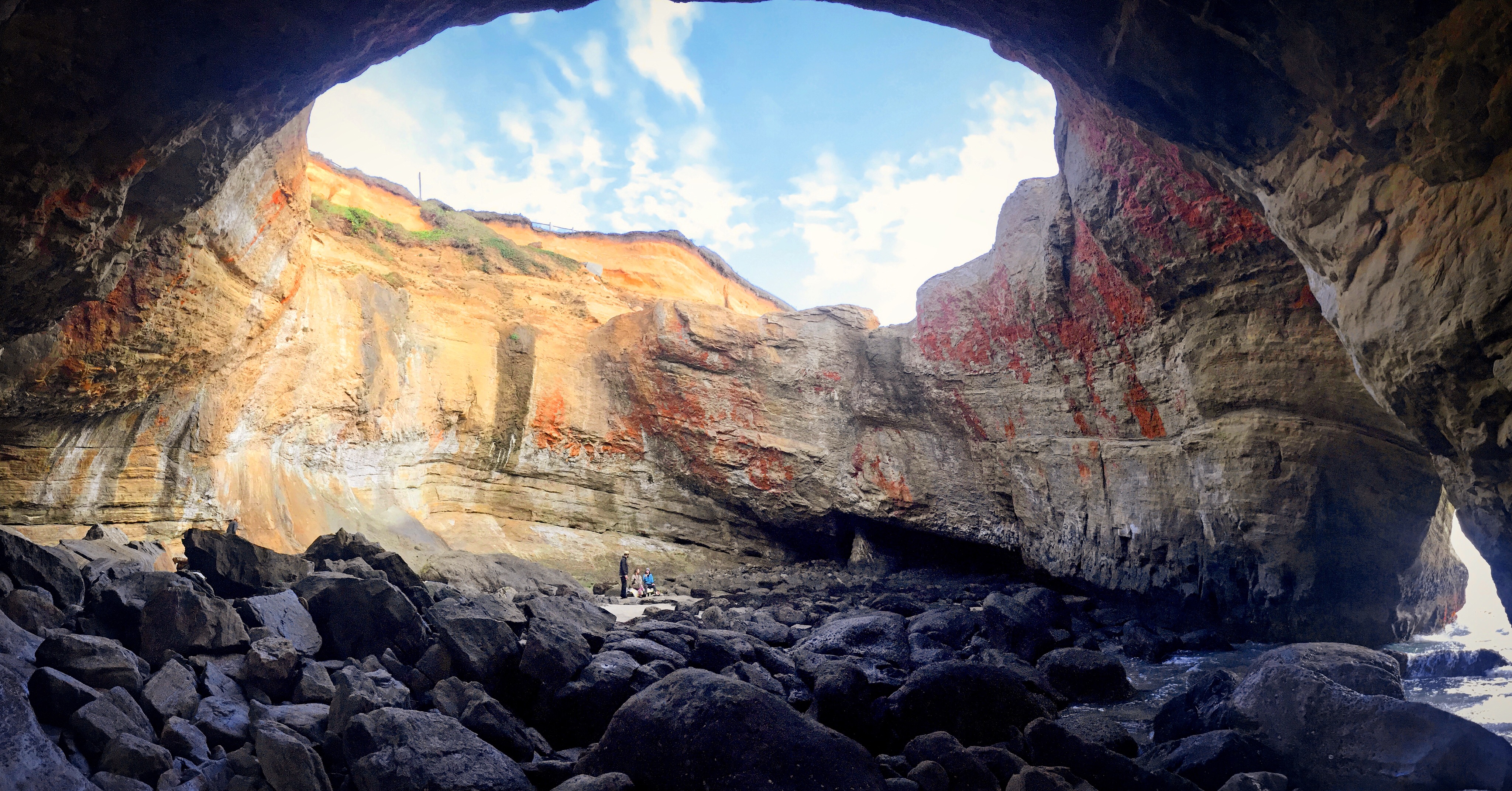 Perhaps the most geologically diverse of Oregon’s coastline, the topography of the state’s central shore ranges from massive sand dunes, basalt cliffs and chasms, and mountainous forests. Driving along hwy101 from Coos Bay, the rocky landscape of the southern coast immediately transforms into towering 500-foot sand dunes. Formed over 20,000 years ago and constantly shifting from the wind and water, Oregon Dunes National Rec area is the continent’s largest coastal dune system and spans more than 40,000 acres. The area provides numerous outdoor recreation opportunities, including OHV use, sandboarding, hiking, horseback riding, and camping. Just down the road is Florence, a small city along the mouth of the Siuslaw River. The town is home to the United States’ largest sea cave, where you can witness the Steller sea lions that find solace in the cave during winter. 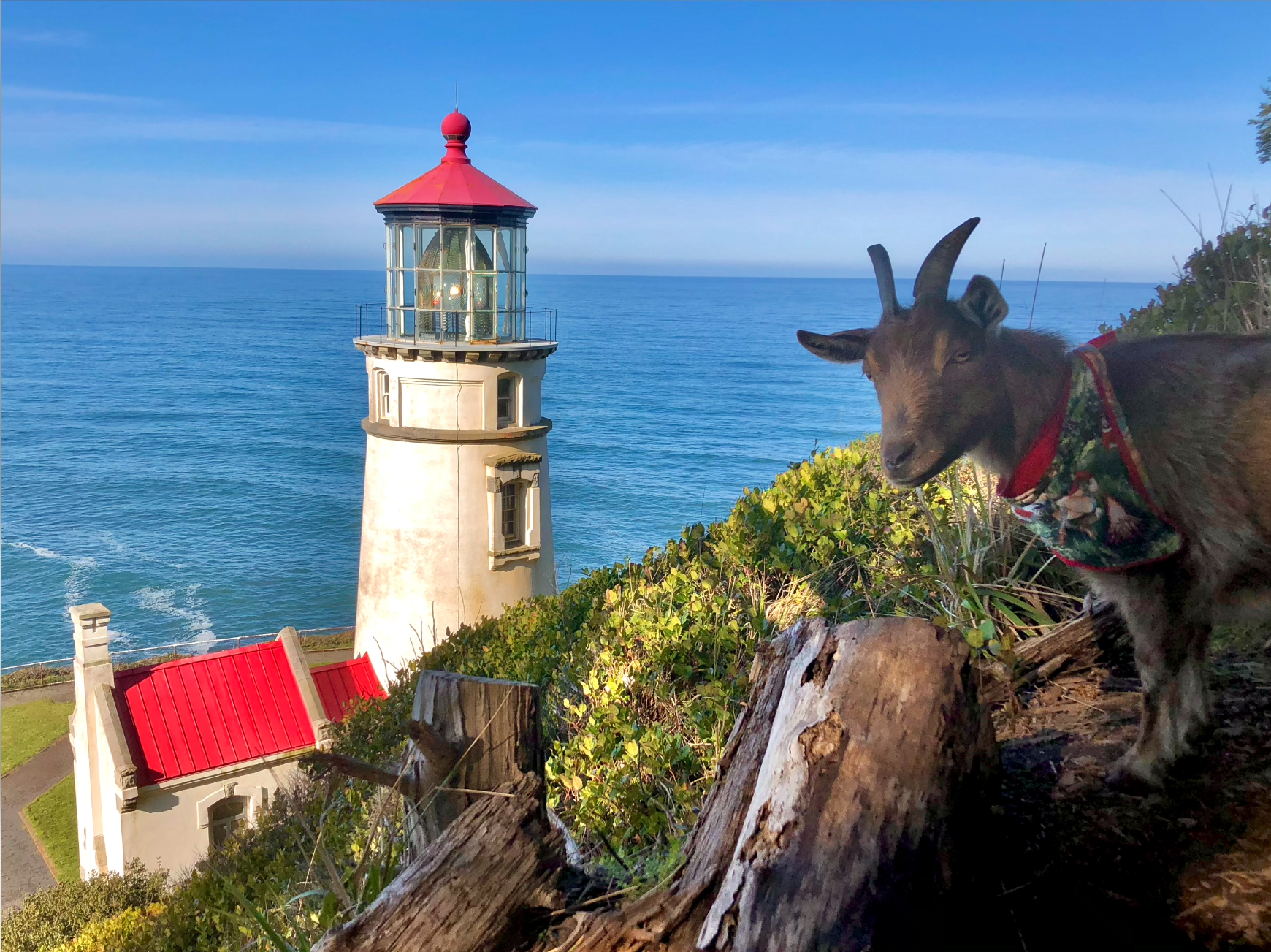 For some nautical history, the Central Coast has some of the most picturesque lighthouses in the state. Heading North from Florence, you’ll pass by Heceta Head Lighthouse, located on a cliff overlooking a beautiful cove. Named after Bruno de Heceta, a Spanish explorer and navigator who surveyed Oregon’s shore in 1775, the lighthouse was constructed in 1892 and remains one of the most iconic lighthouses along the coast. Today, you can either see it from the beach below or take the short trail up to the lighthouse.

Continuing on hwy101, the coastline becomes more rugged as you approach Cape Perpetua, home to some of the most impressive volcanic geology the West Coast has to offer. The best way to explore this area is to download a map that shows you where to spot some of these natural features since some of these features aren’t well marked. To get an idea of the tumultuous nature of Oregon’s Pacific waters, drop by Thor’s Well, a 20ft hole carved out of the black basalt shoreline that fills up with water below and sporadically spews it out in geyser-like bursts. Down the road is Devil’s Churn, a rocky volcanic chasm whose waves violently churn inside the 80ft wide gully. Unlike most coastal points of interest, these places are best to visit during high tide. Afterward, get a birds-eye view by taking the quick drive up to the Cape Perpetua overlook that offers commanding views of the ocean and hwy101 below. Just a couple miles from Cape Perpetua is the charming town of Yachats, pronounced “Ya-Hots” which has some great coffee shops and seafood restaurants like the Drift Inn Café. 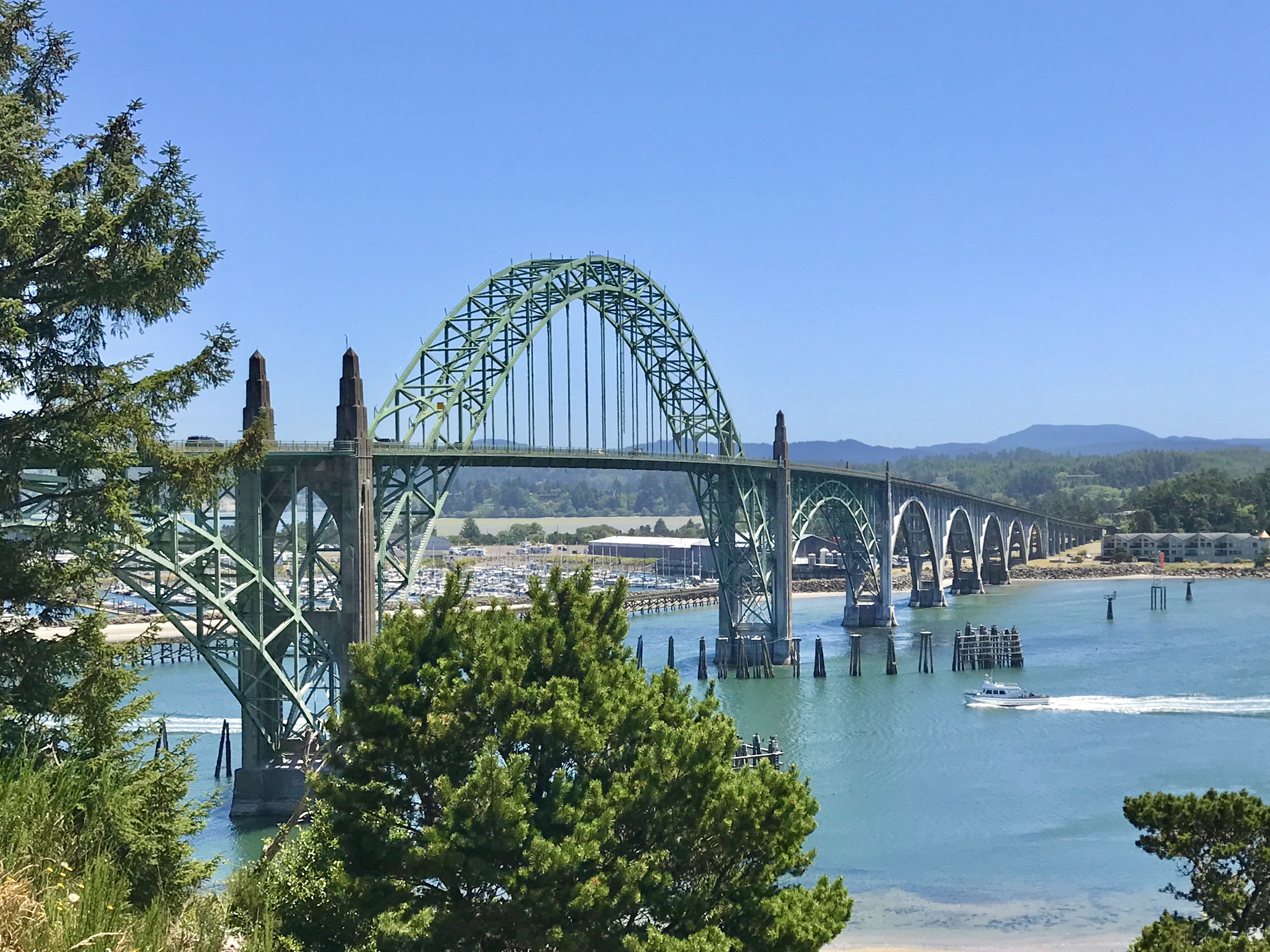 From Yachats, head North over the art deco-era Yaquina Bay Bridge to the city of Newport. While in Newport, visit the Yaquina Head lighthouse, the tallest lighthouse along Oregon’s coast, and explore the many tide pools below the cliff. To see one of the coolest natural features of Oregon’s Coast, take the quick hike to Devils Punchbowl. This open-sky cavern can only be safely accessed during low tide; however, it can be viewed from above at high tide as the frothy water swirls around like a bubbling cauldron. The punchbowl, likely created when the roof of two sea caves collapsed, comprises a sandstone/siltstone mix and is beautifully adorned with vibrant multi-colored moss and crustaceans. 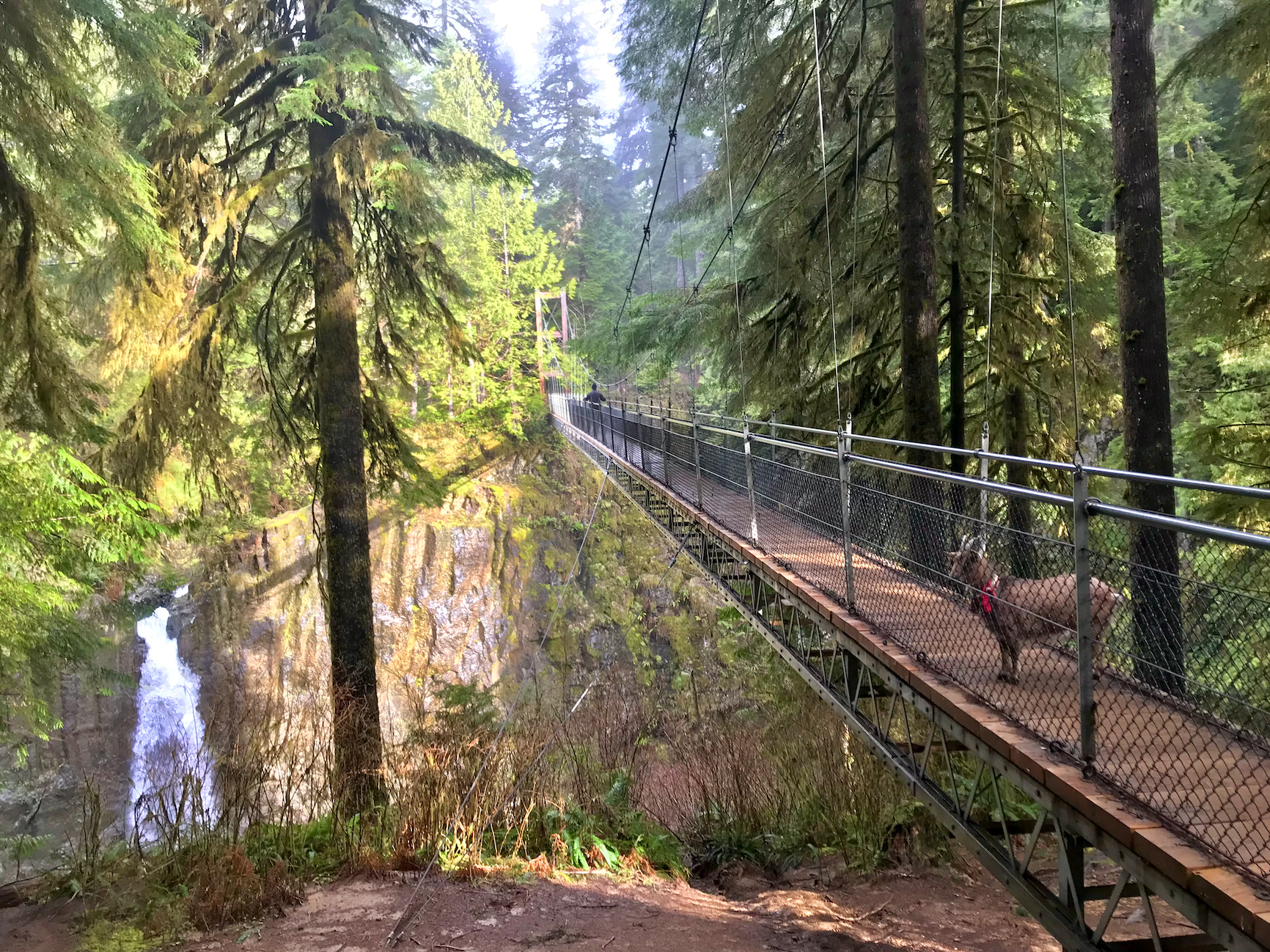 Hiking Drift Creek Falls near Lincoln City @catebattlesContinuing along hwy101, you’ll enter the community of Depoe Bay, whose claim to fame is having the world’s smallest natural navigable harbor; a snug 6 acres. The town is small, but their wildlife viewing opportunities are immense. Dubbed the “Whale Watching Capital of the Oregon Coast,” it’s possible to spot the gray whale year-round, but the best months for whale watching run from December- February and March-May when they traverse the waters between Alaska and Mexico. To get a better view of the migrating whales, Tradewind Charters offers trips where you can view these magnificent creatures up close.

The last major municipality of Oregon’s central coast is Lincoln City, a town that holds several year-round events, one most notably called, “Finders Keepers.” To entice out-of-towners to visit the area, Finders Keepers is a city-sponsored program that works with local glass artists to scatter thousands of orbs along their 7-mile coastline throughout the year. Beachcombers and treasure hunters alike are encouraged to search for these hidden glass balls and take them home. If you enjoy hiking and don’t mind leaving the beach, close to town is one of the coolest hikes along the Oregon coast. The trail to Drift Creek Falls features a 270ft suspension bridge, waterfall, and the lush scenery of the Siuslaw National Forest. 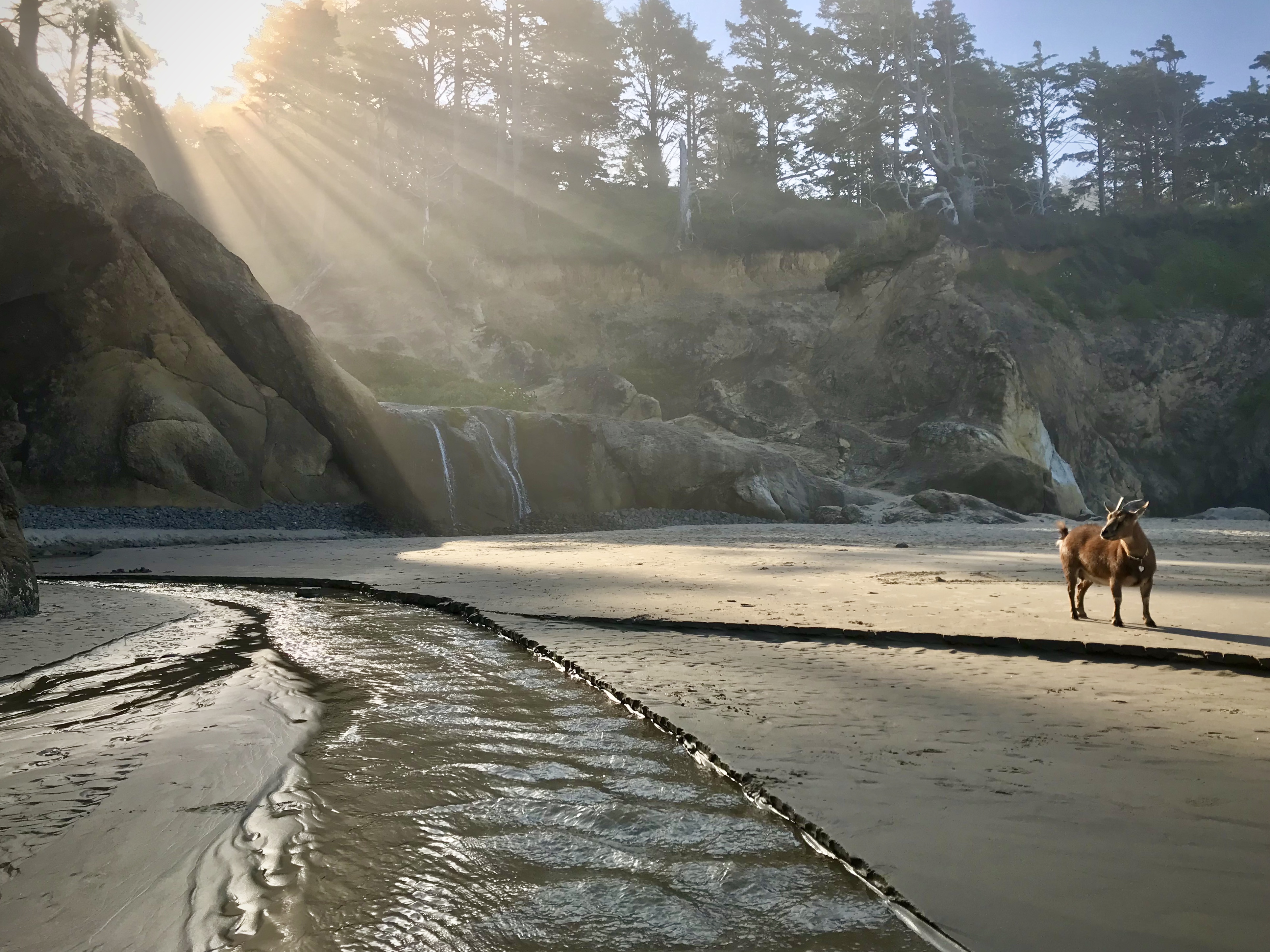 Rays break through the trees at Hug Point  @catebattles

Shortly after leaving Lincoln City, you’ll arrive in Neskowin, where you’ll find clues of Oregon’s past. Only visible during a negative tide, is the eerie remnants of an ancient forest, concealed for centuries after the major Cascadian Subduction Zone earthquake during the 1700s. These ancient stumps that have been carbon-dated to around 2,000 years old are all that remain of the Sitka forest that covered the area for a couple millennia. When the earthquake dropped the land into the tidal zone, the ocean water rushed in, burying the stumps in mud and sand, which helped preserve them.

From Neskowin, cross over the marshes of the Nestucca Wildlife Refuge and stray from Highway 101 to follow the Three Capes Scenic Loop. There you’ll pass Cape Lookout, Cape Meares, and Cape Kiwanda, known for its colorful sand dune. Merging back onto the highway, you’ll enter the town of Tillamook, a town that may be best known for its famous cheese factory, where you can take a tour and sample the different cheeses. Continuing North from Tillamook, plan to stop at Hug Point State Recreation Area, one of the most photogenic beaches along the coast that features several sea caves as well as a waterfall that cascades down to the beach. 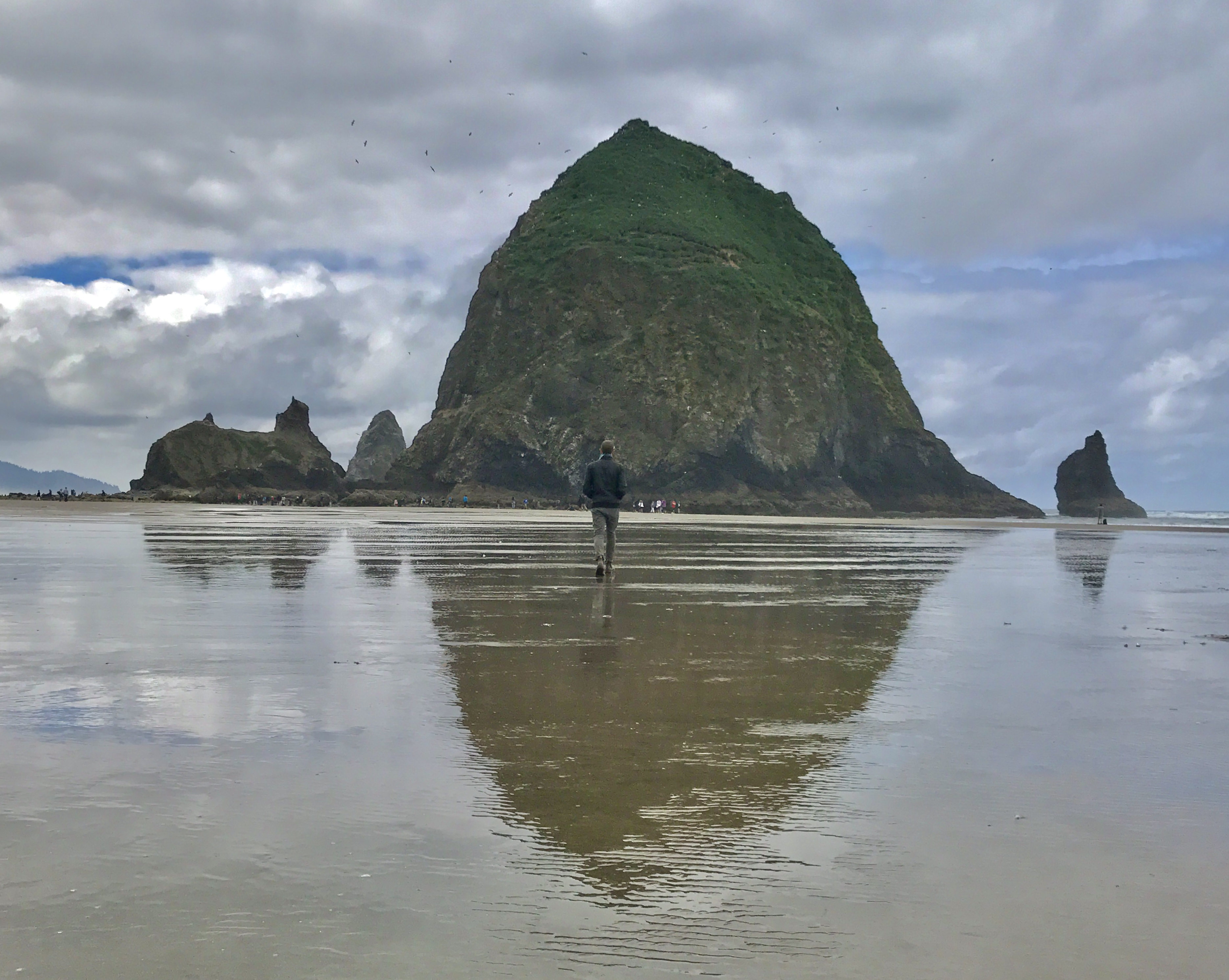 Heading north, you’ll pass several resort towns, including Manzanita, Seaside, and most notably Cannon Beach. Perhaps most recognized as the filming location for the beloved coming-of-age classic, The Goonies, Haystack Rock is one of the most iconic landmarks in Oregon. The shoreline itself is not as impressive as some of the other places mentioned, but the beach is soft and wide, allowing extra space for the crowds of people who visit there. Adjacent to Cannon Beach is Ecola State Park, which offers great hiking trails and views of the coastline.

The final town along the Oregon Coast is Astoria, situated along the mouth of the Columbia River. This area is known as the “Graveyard of the Pacific” as it’s the final resting place of numerous shipwrecks over thehttps://www.oregonlive.com/history/2021/03/we-mapped-every-major-shipwreck-at-the-graveyard-of-the-pacific.html years. One of the most famous of these wrecks also happens to be one of the most easily accessible. Located in Fort Stevens State Park, take the short walk down to the beach and explore the wreck of the Peter Iredale during low tide. This four-masted steel barque sailing vessel ran ashore on October 25th, 1906 after failing to navigate the rough waters to the Columbia River. 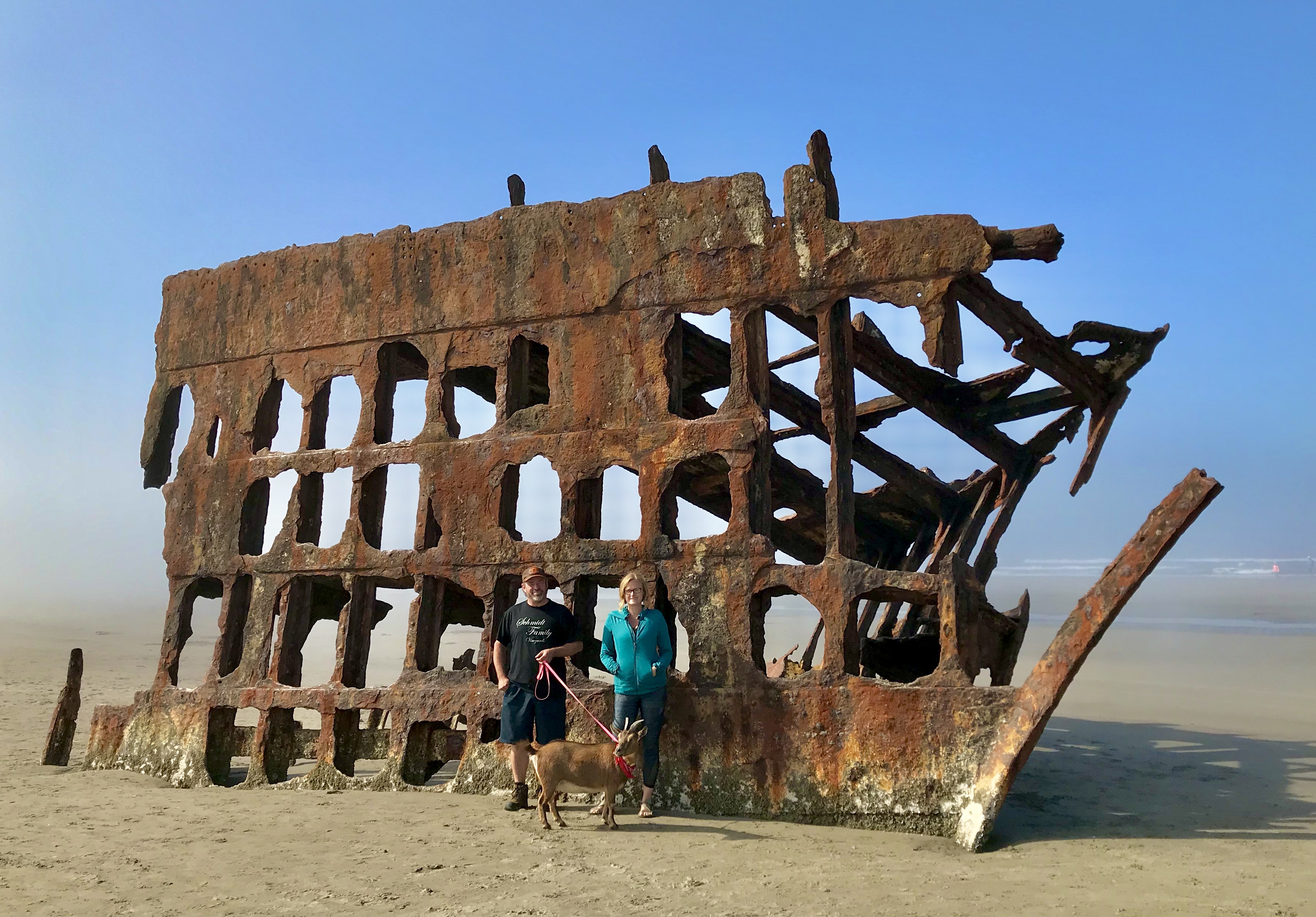 Cate, Chad and Frankie at the Peter Iredale @catebattles

After exploring the Peter Iredale, finish your coastal journey at the ending point of another famous voyage, the Lewis and Clark Expedition. In 1805 the Corps of Discovery pulled their canoes up along the banks of what would later become Fort Clatsop. Today, you can visit the replicated fort and follow the footsteps of these early explorers. 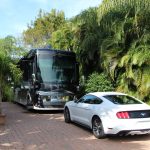 6 Tips for Safeguarding Your RV in Camp Previous
Mark My Words July: RV Air Conditioning and Electrical... Next 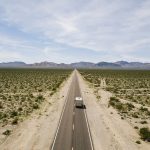