One Tank Trip for Alberta Camping

This One Tank Trip as seen in the 2010 Woodall’s North American Campground Directory.

Taking a trip through Alberta is like finding yourself in the middle of a classic piece of artwork. Everywhere you look, you see such awe-inspiring beauty that it almost seems too perfect to be real. The province provides the traveler with snowy mountain ranges, glassy lake and rivers, deep blue skies, and adventure around every bend in the road. A choice spot in Canada is Alberta camping.

Using Crowsnest Pass as the starting point, let’s have a look around before we set out on this one tank trip. After you’ve set up the rig, head over to the Frank Slide Interpretive Centre, which is a fascinating facility that showcases various events and contributions from the region. Highlights include an examination of early coal mining, as well as the construction of the Canadian Pacific Railway and the 1903 Frank Slide, an avalanche and rockslide for which this center was named. Another spot of interest in Crowsnest Pass is the Leitch Collieries Provincial Historic Site, which takes you into the nitty-gritty of the Canadian coal mining trade, during the late 19th century. You can tour through the notable buildings, such as the powerhouse and managers residence, while the various displays paint a detailed picture of one of the largest mining operations in all of Canada.

Heading east on Highway 3, a cruise through 60 miles of ruggedly beautiful countryside brings you to Fort Macleod, a town that’s been named a designated historic area by Canadian officials. Once you pull into town you will feel as if you’ve traveled back to the romantic days of the Royal Canadian Mounted Police saving damsels in distress from dastardly villains. To add to the illusion, pay a visit to the Fort Museum, which is a fully-restored interactive facility with barracks, offices, jail cells, and parade grounds, all preserved exactly as they were when the fort was a fully-functional Mounted Police Territorial Station. While in the area, check out the oddly-named Head-Smashed-In Buffalo Jump, one of the largest buffalo herding grounds in North America. The site features an interesting museum with exhibits showing life on the prairie and how the ancient tribes used this site to herd and hunt bison thousand of years ago. Or, just enjoy the view of the Rocky Mountains, which are only an hour’s drive from here.

From Fort Macleod, take a southbound heading on Highway 2 and drive along 37 miles until you come to the town of Cardston. This area is just a stone’s throw from the Montana border, and it’s interesting to note that a very large portion of the town’s residents are descendants of the original Mormon settlers, who traveled here in the late 1800s. The Cardston Mormon Temple tells the story of these hardy folks, who braved the trials of pioneer life to establish a town and families. In fact, the Cardston Temple was the first Mormon temple built in all of Canada, in the early days of the 20th century. You’ll also find the Remington Carriage Museum to be another spot of interest, as it boasts a genuinely impressive collection of more than 200 carriages, sleighs and wagons. Some of the carriages are even available for rides, so grab your sweetie, take a romantic ride through town, and enjoy a spot of lunch at the excellent on-site restaurant.

It’s west we go, moving along Highway 5 for about 30 miles until we come to Waterton Park. Upon arrival, you’ll see snow-capped peaks overlooking the glassy-smooth Waterton Lake, and you’ll undoubtedly be inspired to find an appropriate campsite where you can sit and take in all this natural glory. You’ll find any kind of outdoor activity here that strikes your fancy, even if it’s just watching the moose walk by. To say that the landscape is stunning is an understatement. You have to experience Alberta camping for yourself to know for sure.

From here, it’s a northbound drive on Highway 6 for 30 miles, before heading west on Highway 3 for 30 miles, until you find yourself right where you started this one tank trip, in Crowsnest Pass. There’s no doubt about it, Alberta is an unspoiled and regal territory that has called to travelers for centuries, from Native Americans to the Mormon Pioneers. 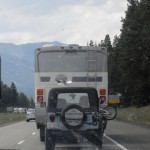 One Tank Trip for Michigan Camping

One Tank Trip for Newfoundland and Labrador Camping