Go Long! 13 NFL Stadiums Worth the Trip for Game Day

Tailgate on the parking lot, then see superstars on the playing field 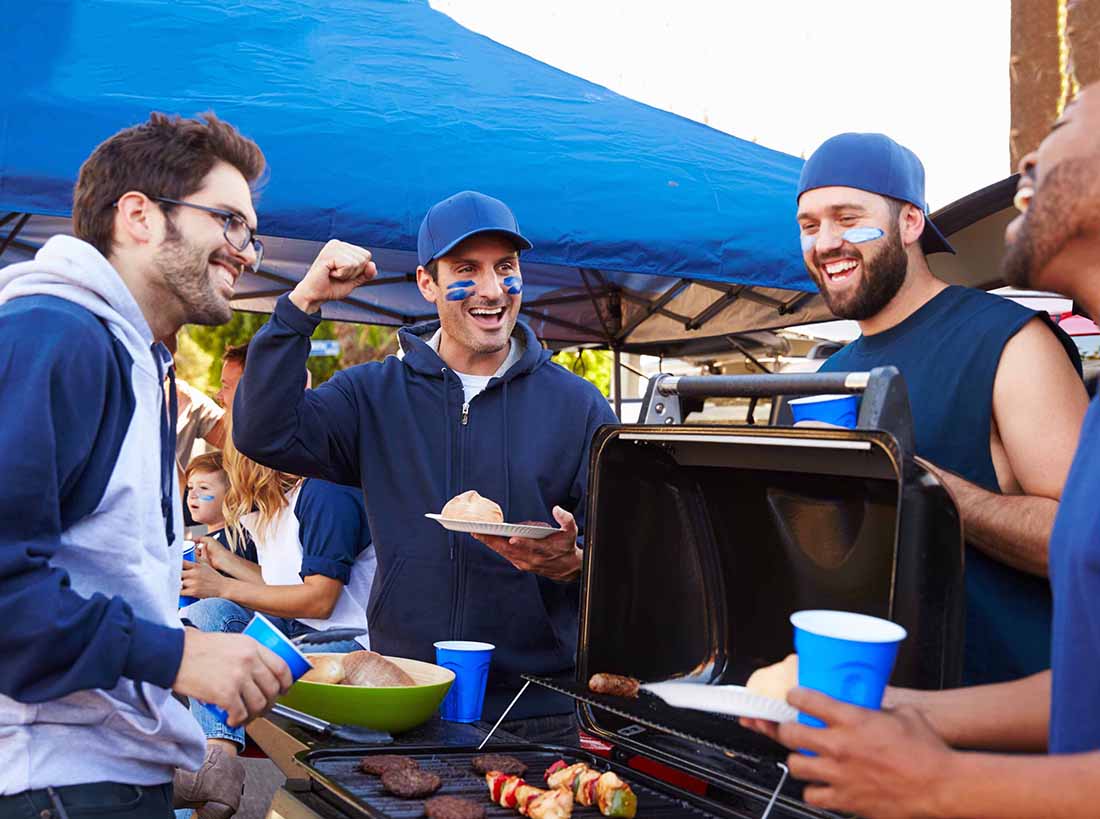 The National Football League season has passed the half-way point, but there’s still time to head to one of the nation’s humongous pro-football stadiums and set up your barbecue grill for tailgating. With winter just around the corner, we took a look at Sun Belt NFL stadiums that welcome RVing fans for football fun.

Pro Tip: When planning for a tailgate gathering, a little resourcefulness goes a long way. The Texas-based Arlington Convention and Visitors Bureau, representing the town that hosts Dallas Cowboys games, recommends preparing a tailgating kit that includes spatulas, tongs, bottle openers and a fire extinguisher. Use six-pack containers to tote your condiments and hot-sauce bottles, and always prep your food ahead of time so that it’s ready to throw on the grill. That means preparing hamburger patties well ahead of time and having the potato salad ready to go.

If you plan to spend a lot of time on the lot, make sure your house batteries are charged, freshwater tank is filled and propane supply topped off. Observe common courtesy with your tailgating neighbors, and party responsibly. Now hit the road for football fun!

The home field of the Phoenix Cardinals welcomes snowbird fans to cheer on the Cards in an indoor stadium that’s famous for its unique rollout grass playing field. The team has struggled so far this season, but fans still find a way to have a great time NFL RV tailgating in the Valley of the Sun.

Sportsman’s Park carparks, an eight-minute walk east of the stadium, is open four hours prior to kickoff. RVs are welcome, and there is also the Youth Sports Fields and Lot H. Don’t plan too many post-game celebrations: Sportsman’s Park will close one hour after the conclusion of the game.

What to Bring: Nothing warms up southwest winter like Light and Layered Taco Dip. Midwest Living serves up a great recipe with turkey, chili peppers, beans and avocados. It’s a spicy and filling meal that will give you enough fuel to last through game day. The temperature rises in Hotlanta when football season rolls around. Fans turn out in droves to see their beloved falcons, even though the team currently languishes in the basement of the NFC South.

The state-of-the-art Mercedes-Benz Stadium has redefined game-day fun with the Home Depot Backyard, an 11-acre green space for the local community to gather and have fun. The yard offers exercise programs throughout the week, along with special events during game day, like an onsite DJ, food and cocktails. The stadium also offers turn-key tailgating providing tents, chairs, TVs and bellhop services through a partnership with the Tailgate Guys. Tailgating from vehicles is allowed on the Philips lot on Foundry Street.

What to Bring: When it comes to tailgate snacks, nothing beats the zing of jalapeno poppers. This recipe combines the flavor of bacon, the smoothness of cream cheese and the heat of jalapenos. Cook it on a grill and enjoy its zing. The Carolina Panthers NFL Team is young by league standards — founded in 1995 — but they hold on to age-old tailgating traditions. Tailgaters can choose a regular space as low as $11 or get a premium tailgating site for more than $100. RV parking is available at Cedar Yard Station, located immediately east of the Interstate 77 and Morehead Street interchange.

What to Cook: The Pantherfanz Tailgating club has made a fine art of whipping up snacks for game day. Carolina Panthers fan and club member Dan “12th Man” Ortel proudly shared his sizzling 12th Man Hot Wings recipe. This dish serves as the perfect appetizer to kickoff. Located just minutes west of downtown Dallas, this football palace is loaded with state-of-the-art bells and whistles, like a retractable roof, 60-yard-wide video screens and enough room for a whopping 100,000 fans. But seasoned fans know that the action happens in the parking lots where tailgaters fire up the grills. RVers, take note: RVs and oversized vehicles (any vehicle longer than 19 feet) must be parked in Lot 14. All other lots are for standard size vehicles only. An RV/Oversized vehicle parking pass is required, and a limited number of RV/Oversized spaces are available.

What to Bring: The Cowboys’ Tailgate Nation offers an onion burger recipe that will dazzle the most jaded football fans. Located in the heart of the biggest town in Texas, NRG Park brings football fans together for football excitement under the first retractable dome in stadium history. RVs, buses, and oversized vehicles are required to pre-purchase a minimum of two parking spots (prices for individual spots start at $30) and need to park in the designated RV areas in each lot.

What to Bring: When it comes to tailgating food, nothing says Texas tailgating like the Friday Night Lights Frito Pie recipe, which combines crunchy texture with savory flavor.

Home of the NFL’s Jaguars, TIAA Bank Field spoils fans with amenities that include a pair of wading pools and a two-story party deck that accommodates 20 cabanas. But before settling in for the football game, take the time to enjoy the local tailgating scene.

Parking Lot Q is the Tailgating Lot but it’s restricted to season ticket holders only. However, RV parking is available at the nearby Jacksonville Fairgrounds. Tailgaters Parking is another great place to tailgate. Open four hours before kickoff, it has clean bathrooms and its own outdoor restaurant/bar in the parking lot.

What to Bring: For Florida football fans, nothing beats the Pomeroy BBQ Sundae, a combination of beef, brown sugar, chili powder and espresso that tastes a lot better than it sounds! Shula. Marino. The No-Name Defense. The legends of Dolphin football live large in the collective memory of southern Florida football fans. The Hard Rock Stadium, meanwhile, has an eye toward the future, with a sleek design and more than 16 modernistic murals on display throughout the venue. Before the game, visitors can enjoy the scenery from the parking lot while sipping brews and cooking (parking for RVs is $80, but it’s worth the Miami fun).

What to Bring: While in Miami, whip up these Cuban sandwiches recommended by Midwest Living. These easy-to-make sammies will get you in the spirit for gridiron competition. The culinary stylings of New Orleans add a spicy kick to the football ambience in the Mercedez-Benz Superdome. Where else in the U.S. do concessionaires serve up shrimp and po’boys to hungry fans? But nothing beats the treats you can whip up yourself with the right tailgating recipes.

Tailgating is restricted in the parking areas around the stadium. Still, the nearby RV parks, along with the surrounding atmosphere, make it worth your visit. And if you’re bringing a toad, you’re in luck.

What to Bring: Regardless of where you are, you’ll feel the robust spirit of New Orleans in recipes like Emeril’s Classic Seafood Gumbo, created by celebrity chef Emeril Lagasse.

The San Francisco 49ers have enjoyed a winning season so far this year, so you can expect an electric atmosphere in Levi’s Stadium in Santa Clara (if you can score a ticket). Before kickoff, fans can peruse the exhibits of the 49er Museum, which chronicles the team’s past championships, or enjoy a pregame celebration at the Red Zone Rally, an extravaganza with top-of-the-line food and beverage in an air-conditioned space.

Regardless of your plans, schedule time for tailgating. Prices for parking passes may differ by event. A parking pass allows for one space per vehicle only, and will be limited to vehicles measuring less than 17 feet in length and 8 feet in width. Buses or RV’s that would like to purchase parking in advance must call 408-579-4449 or use the Levi’s® Stadium mobile app.

What to Bring: When it comes to tailgate cuisine, you can’t beat the advice from Hall of Fame quarterback Joe Montana, who led the team to four Superbowl victories. Montana says there’s only one champion of the tailgating scene: the old-fashioned hamburger. “It’s the simplicity of a quality hamburger that makes it perfect,” Montana told the culinary website Chowhound. The home of the Tampa Bay Buccaneers goes all-in on the pirate theme. There’s even a permanent 103-foot pirate ship moored in 20,000-square-foot Buccaneer Cove overlooking the field that extends the entire length of the north end zone. If you prefer RVs to pirate vessels, park in Lot 14 on game day. This area accommodates hardcore tailgaters who come to have a great time before the first kickoff.

What to Bring: Sharon Kennedy, a writer for the Tampa Bay Times, reported that the tried-and-true bloody Mary is a popular beverage in the hours before the first play. Chowhound offers a Bloody Mary recipe that includes lemon juice, lime and Worcestershire sauce among the ingredients. The LA Tailgating scene is in the midst of a big transition. The Chargers currently play in Dignity Health Sports Park, while the Rams home games kick off in the Los Angeles Coliseum. But in 2020, both teams will move to brand-new SoFi Stadium, set to be the NFL’s biggest stadium with high-speed Wi-FI and innovative indoor-outdoor design. The stadium will have a seating capacity of 70,000 that can be expanded to 100,000. At present, the tailgating picture isn’t clear, but wherever you go, you can rely on the recipes below.

What to Bring: Chargers.com recommends Smoky Chicken Nachos, while Rams fans can get the party started with some Jello Shots.

The Oakland Raiders will become the Las Vegas Raiders after 2020. The team’s new home, Allegiant Stadium, is still under construction in Vegas near Interstate 15 across from the Mandalay Bay Hotel and Convention Center. But die-hard California-based fans of the silver and black still turn out to watch their team play the few remaining games left on the schedule at their current California venue, Oakland Arena and RingCentral Coliseum.

On-site parking is available for all events at the Oakland Arena and RingCentral Coliseum, including parking accommodations for RVs.

What to Bring: Whether the game is played in Oakland or Vegas, fans can feast on the Oakland Raiders Tailgate Dog. It’s a recipe that blends jalapenos, chili and macaroni and cheese in a marriage made in Raiders heaven. 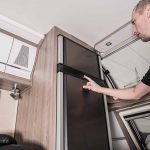 Keep Your Cool: Replacing an RV Refrigerator With a Residential... Previous
Get Ready to Have Fun in Tangipahoa Parish, Louisiana Next 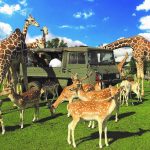