The Travel Guide to Ice Fishing in Upstate New York 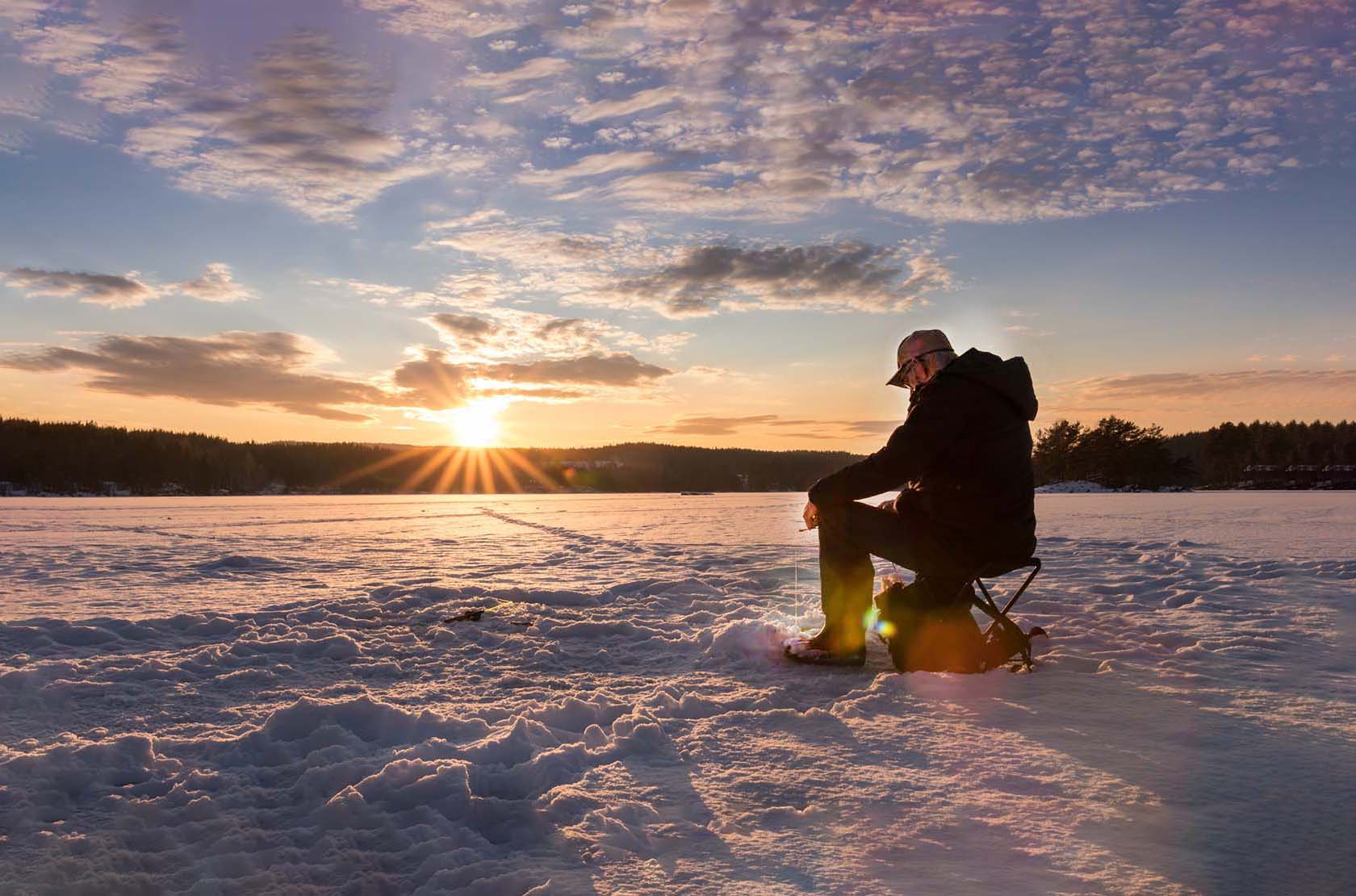 When it comes to bagging great winter bass, trout and panfish, it’s hard to beat ice fishing in Upstate New York. We’ve had a few warm seasons in the northeast and I’ll tell you what, the people around here are itching like never before to get out on the ice.

I’m neither a scientist nor a politician, but it seems like some form of climate change is impacting the way we fish in the northeast. It’s been trending in that direction for many years now. I can remember when I was nine or ten years old, there was no questioning whether or not the ice was thick enough to walk on. If it was December or January, it was thick enough and we all knew it without even measuring. 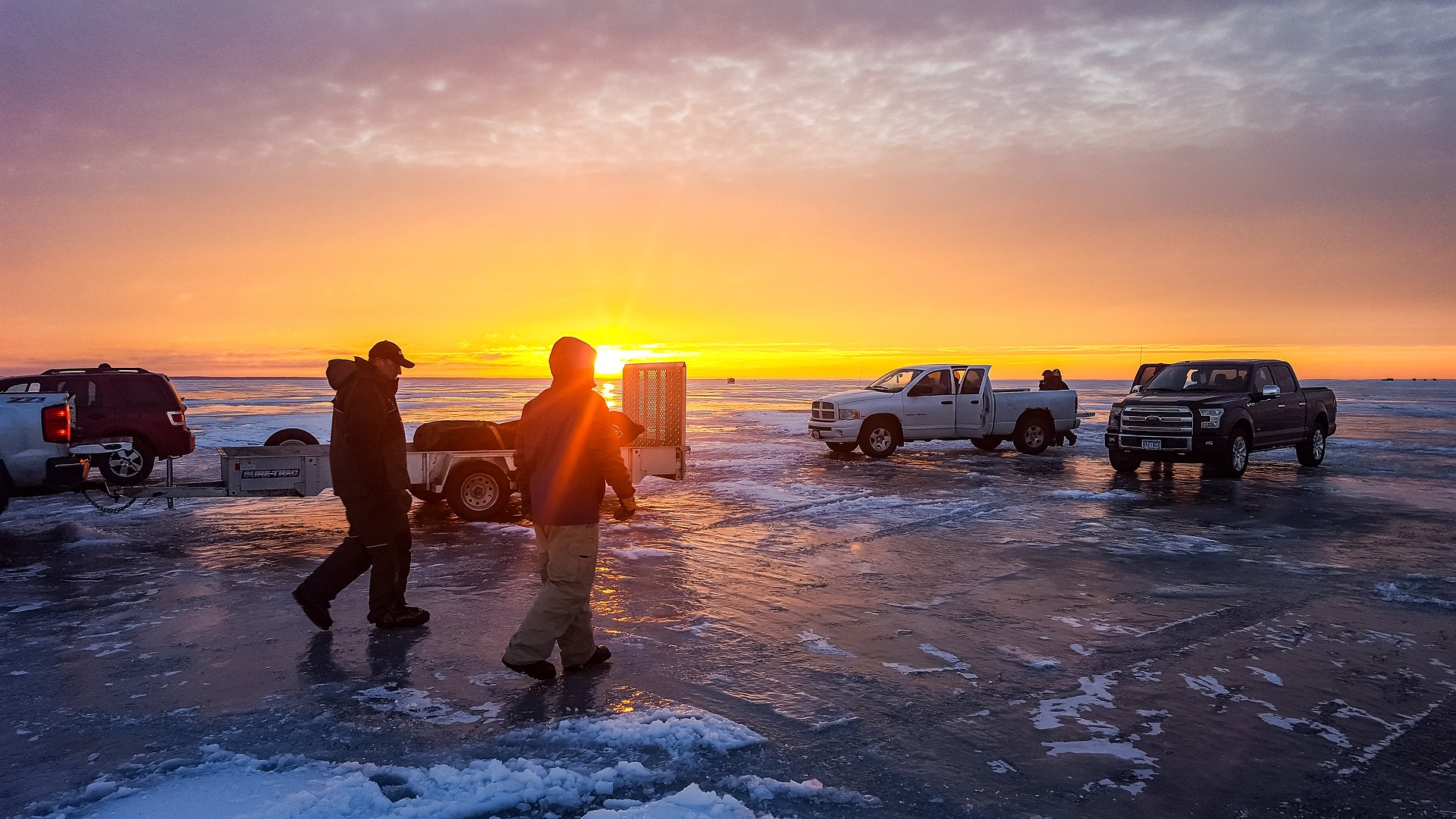 In fact, the ice used to be so thick that we actually had to put extensions onto the augers to get through the ice. We’d plant our makeshift shelters out there and pretty much leave them there for the entire season until late February or early March, when everything started to thaw out. This isn’t the occasion anymore.

Nonetheless, ice fishing is still a hot topic in upstate New York, and there is no shortage of fishing opportunities, whether you’re fishing the hard water or not. Of course, the list goes on and on about the places you could fish, but here are a few of my favorites as well as some tips and tricks I’ve learned over the years.

Here are some of my favorite upstate New York ice fishing lakes:

Anglers come here for walleye, perch, trout and a variety of panfish. There’s also smelt here and, according to a lot of the locals, this is the only lake you can fish and actually find decent sizes. Most people would consider smelt to be a baitfish, but if you can manage to pull one in of solid size, they’re actually quite tasty. Plus, because of the sheer number of them, there isn’t a daily limit on the lake, so you can fish all you want. 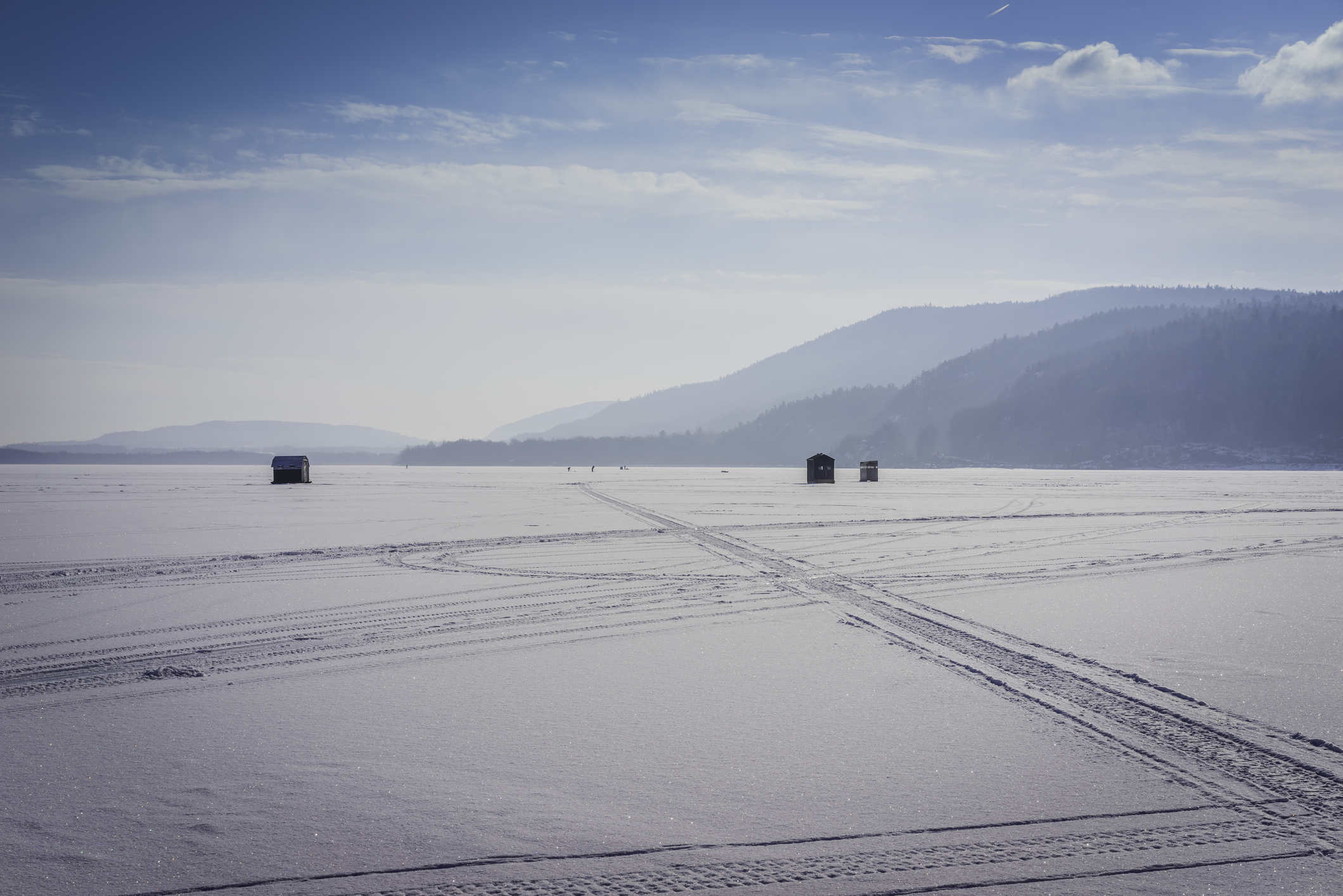 You’re free to fish most of the lake, with the exception of Malletts Bay and Missisquoi Bay in Vermont. There are also special border regulations, so be sure to inform yourself of all your Ps and Qs before dropping a jig.

You can use up to 15 tip-ups and two lines and you’re limited to 50 perch and sunfish per day. Access the lake from Route 87 and 22, and you’ll find a wide assortment of parks and boat launches with parking. Ticonderoga off 74 is a popular spot and you can also launch at Port Douglas off 16.

In the case of ice fishing (which I assume is why you’re here), the lake is pretty much wide open and when the ice is thick enough, you’re free to drive on it with ATVs and other all-terrain vehicles to pull your sleds out to the holes. 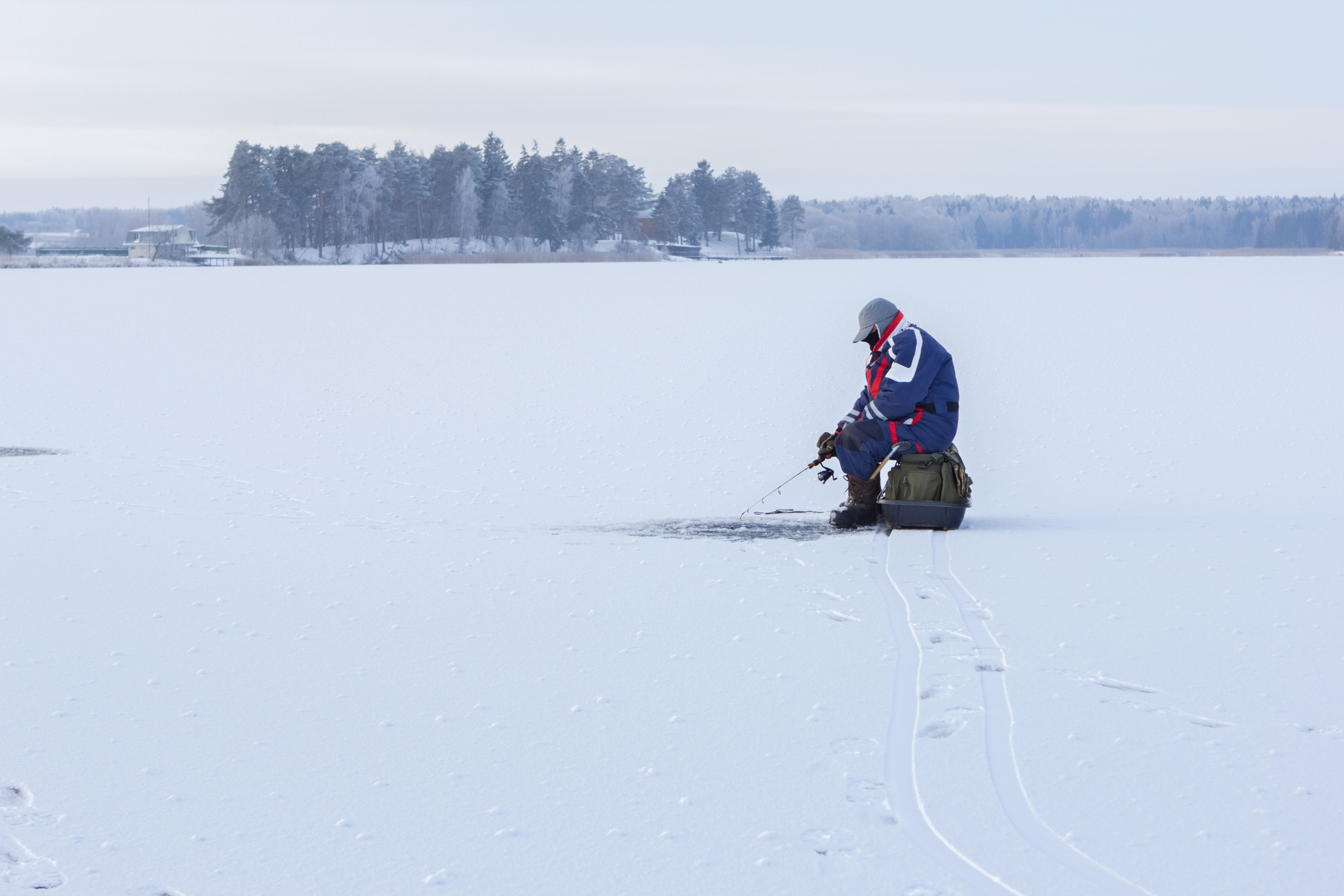 Ice fishing. Saratoga Lake in the Springs is open for ice fishing and people come here to catch a wide variety of fish, including walleye, northern pike, yellow perch, chain pickerel and plenty of panfish. It’s important to mention that Saratoga does fall under the “special regulations” of New York State, so there’s a little more red tape to cut through.

Saratoga falls into a unique category of protected waters. I could sit here all day and tell you about every little rule and regulation, but it would take too long. Here’s the special regulations guide. There are specific seasons, even within the ice fishing season, where you’re allowed to keep certain species. If all of this red tape is a little too much for you to swallow, I understand, but let me tell you that once you figure it out, the fishing here is great. It’s not as bad as you think. 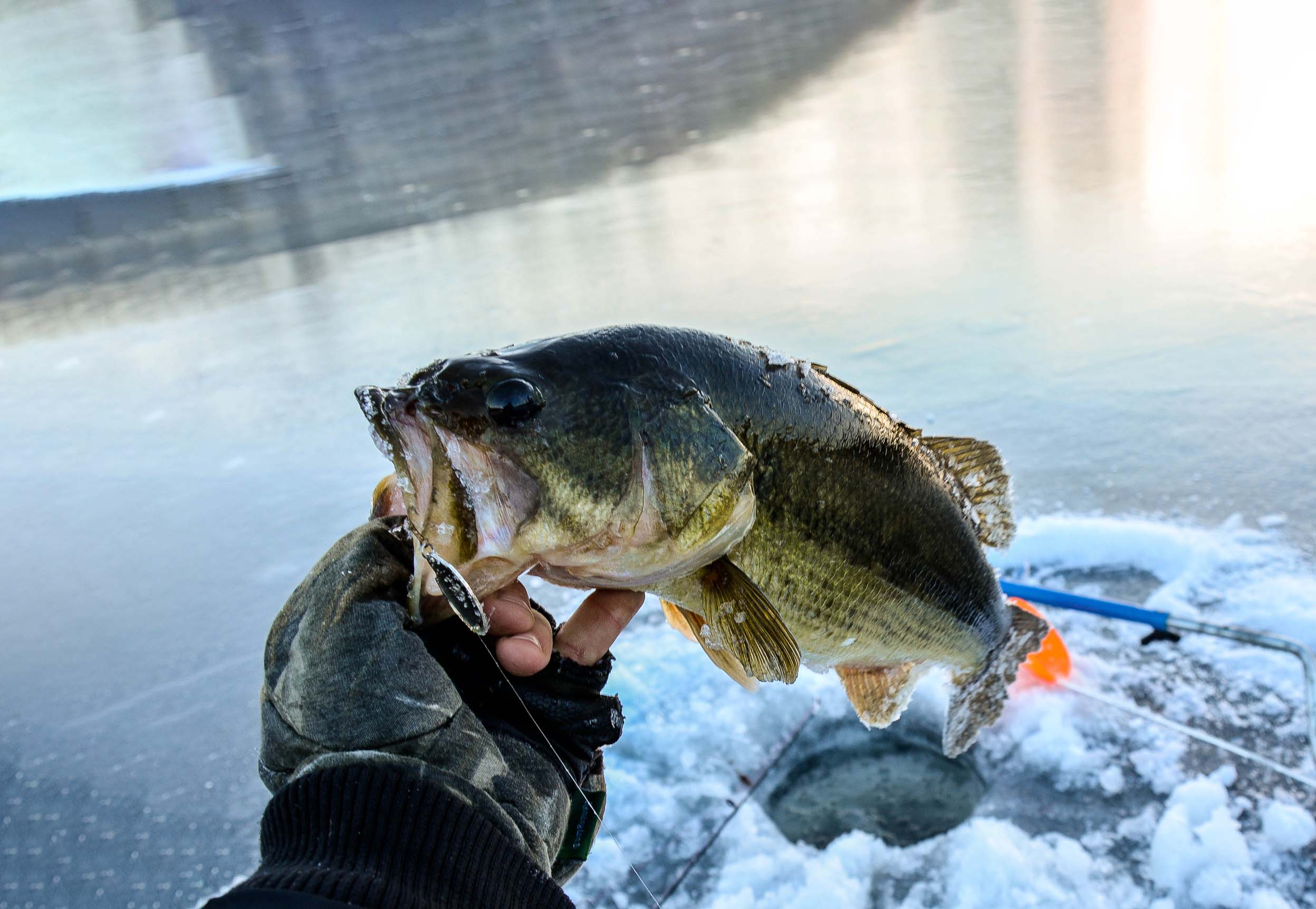 Anyway, it’s a 3,762-acre lake with 12 miles of shoreline and an average depth of 25 feet. You can access the boat launch off U.S. Route 9 and they do charge a fee to launch here. Of course, ice fishing doesn’t require that and you’re free to roam about the ice with your all-terrain vehicle, thickness permitting. The lake gets stocked each year with walleye, so it’s really a great destination for ice anglers. 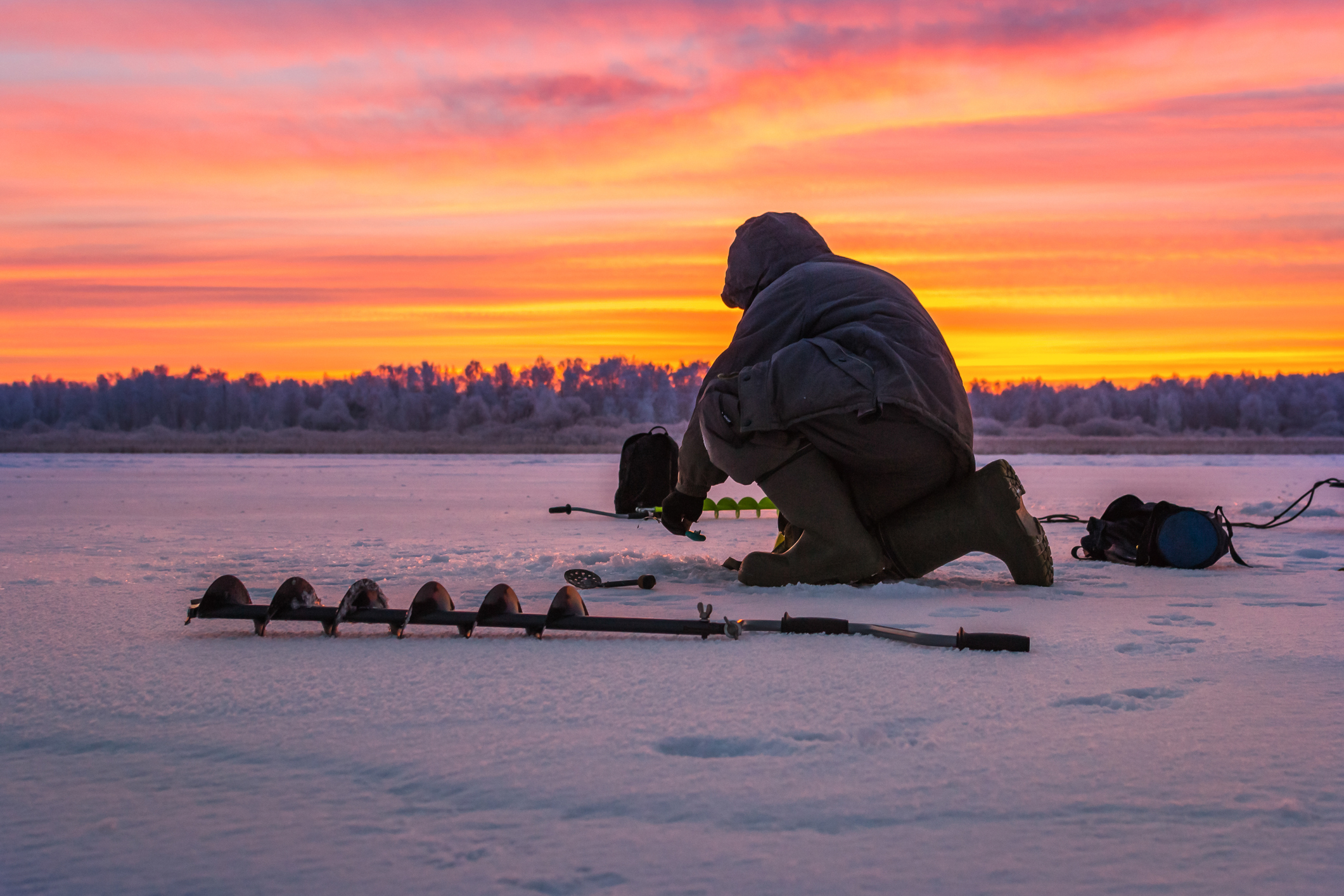 Here we have a 2,137-acre lake with an average depth of 33.5 feet. It spans through a few towns and a couple of counties and serves as one of the state’s most popular ice fishing destinations. If you’re looking for a place where you can have the whole lake to yourself, I wouldn’t recommend Fourth Lake. That said, you’ll find a wide variety of species here, with smelt being a popular target.

Take the shallower parts of the lake and you can hook yellow perch, bass, northern pike and musky. Ice fishing is permitted here with special regulations as well, so you’ll want to read up on those if you plan on keeping anything to keep yourself out of trouble. According to the locals, jigging grubs is a popular option here, whether you’re fishing for smelt or panfish. You can best access the lake off State Route 28 and take it north to Inlet. 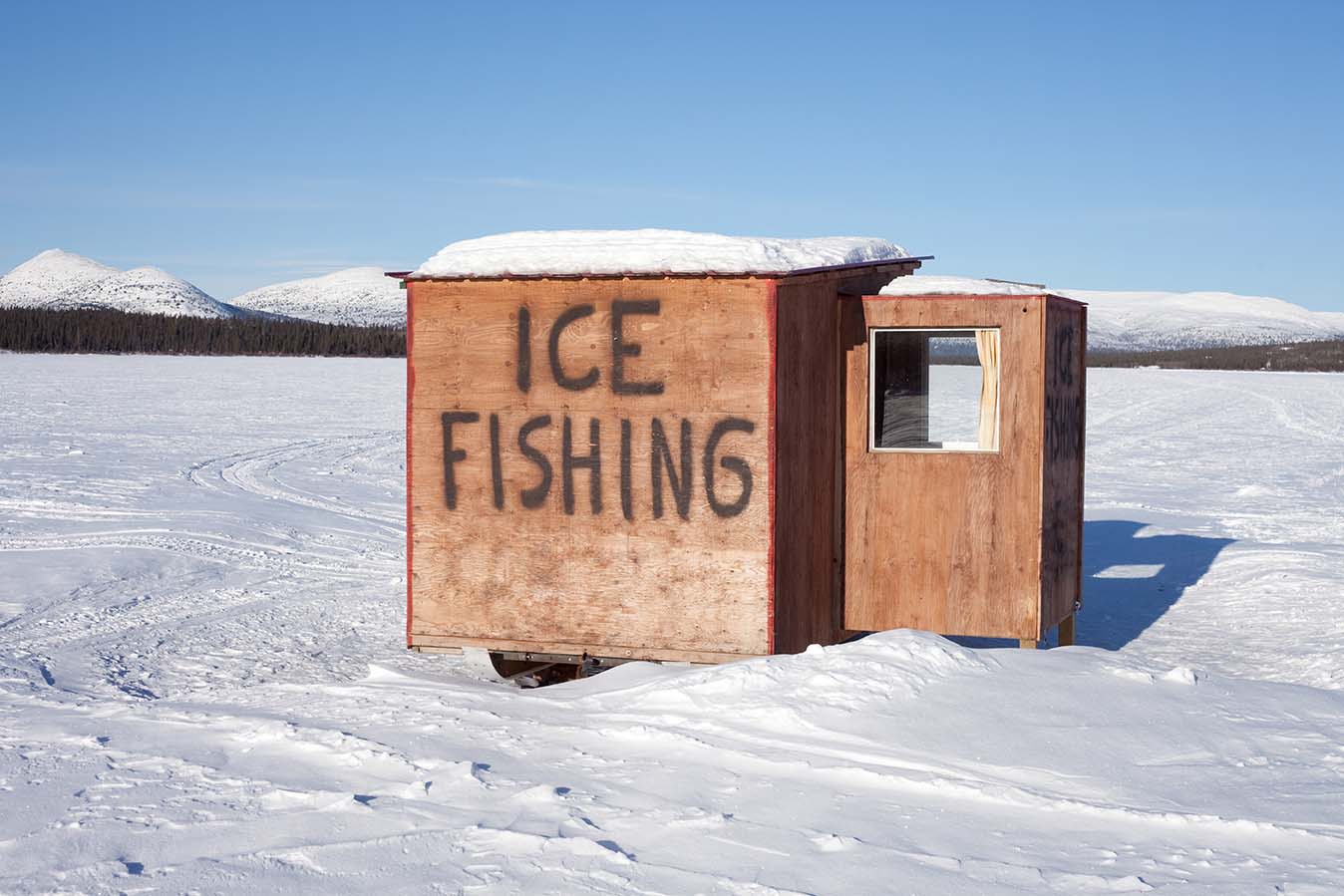 Travel 10 miles north of Syracuse and you’ll find Oneida Lake. Occupying 50,894 acres, Oneida is the largest lake entirely within New York State with an average depth of 22 feet. It has more than 77 miles of shoreline and is open to ice fishing whenever the ice thickness permits. It’s best known for its dense population of yellow perch and walleye and this is because it’s stocked each year. In fact, the lake actually hosts a variety of professional fishing tournaments like Bassmaster, making it one of the more popular bass angling destinations in the country.

There are many access points, with many of them being in Oswego County. You can access the lake via the Cleveland Dock off route 49, Taft Bay and Three Mile Bay, all off State Route 49. There’s access off Interstate 81 as well near the cross of 81 and Swamp Road. There’s plenty of parking here and a variety of shore fishing opportunities if the ice isn’t ready. 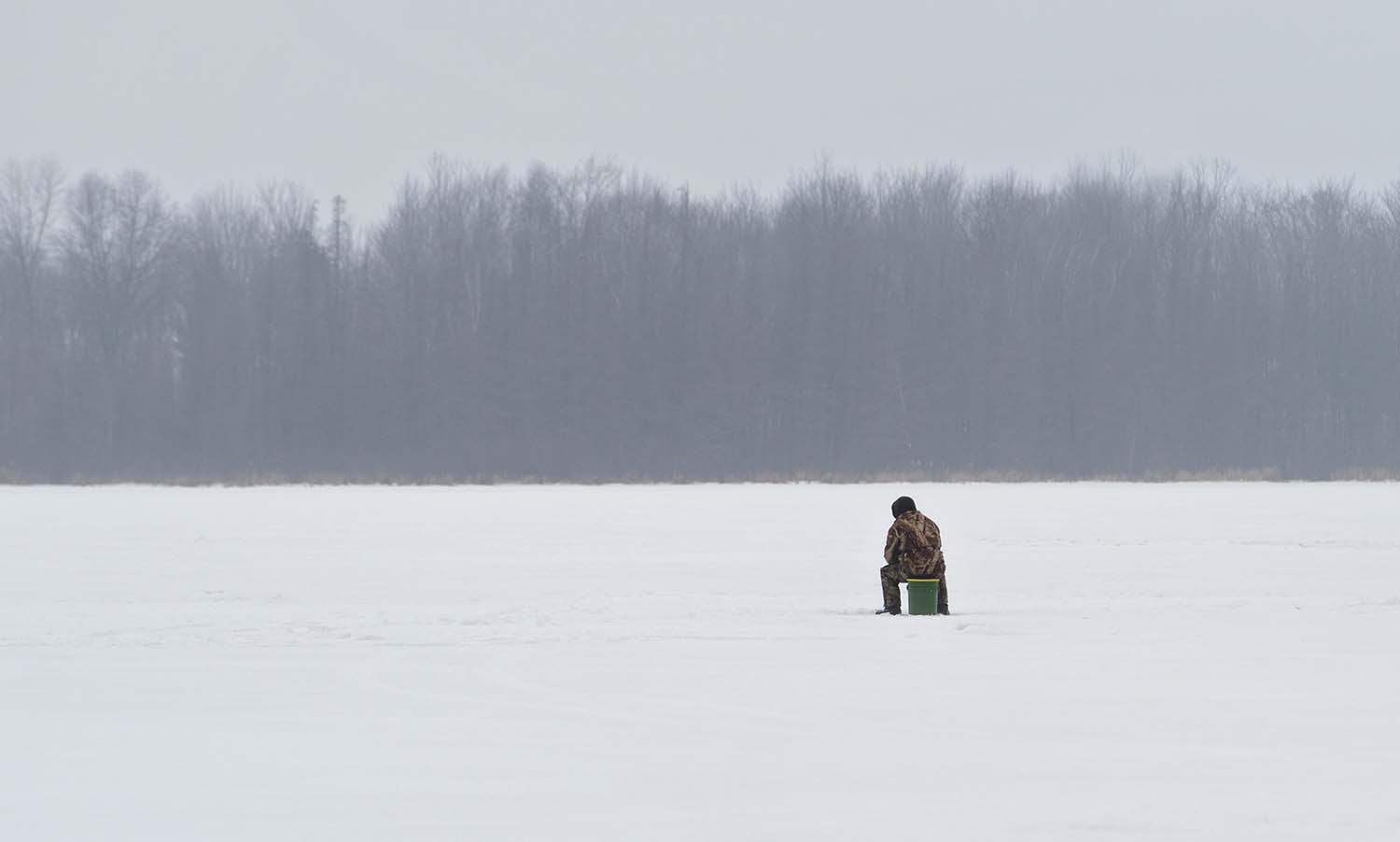 If you’re looking for an exciting place to fish, Cayuga Lake is that. It’s the largest finger lake and over 400 feet deep, so it never really freezes over except a small four-mile span at the north section of the lake. You’ll want to travel along State  Route 89 on the western portion toward Cayuga Lake State Park and that’s where you’ll find the only ice fishing access on the lake.

Jigging raps for walleye and perch are popular as well as micro-tungsten dots. There isn’t a ton of fishing space here and it’s not super deep, so you don’t need a ton of line and an eight-pound braid should be good enough to get the job done. Tip-ups are always a good option as well.

How Do You Know the Ice Is Safe?

The general rule of thumb is that five inches of ice can bear the weight of a person of any size. Many people will say four inches, and believe me, I’m not a big person, but I’d rather not push my limits. There can be areas where water is still moving underneath the ice and that will make it weaker in those areas. 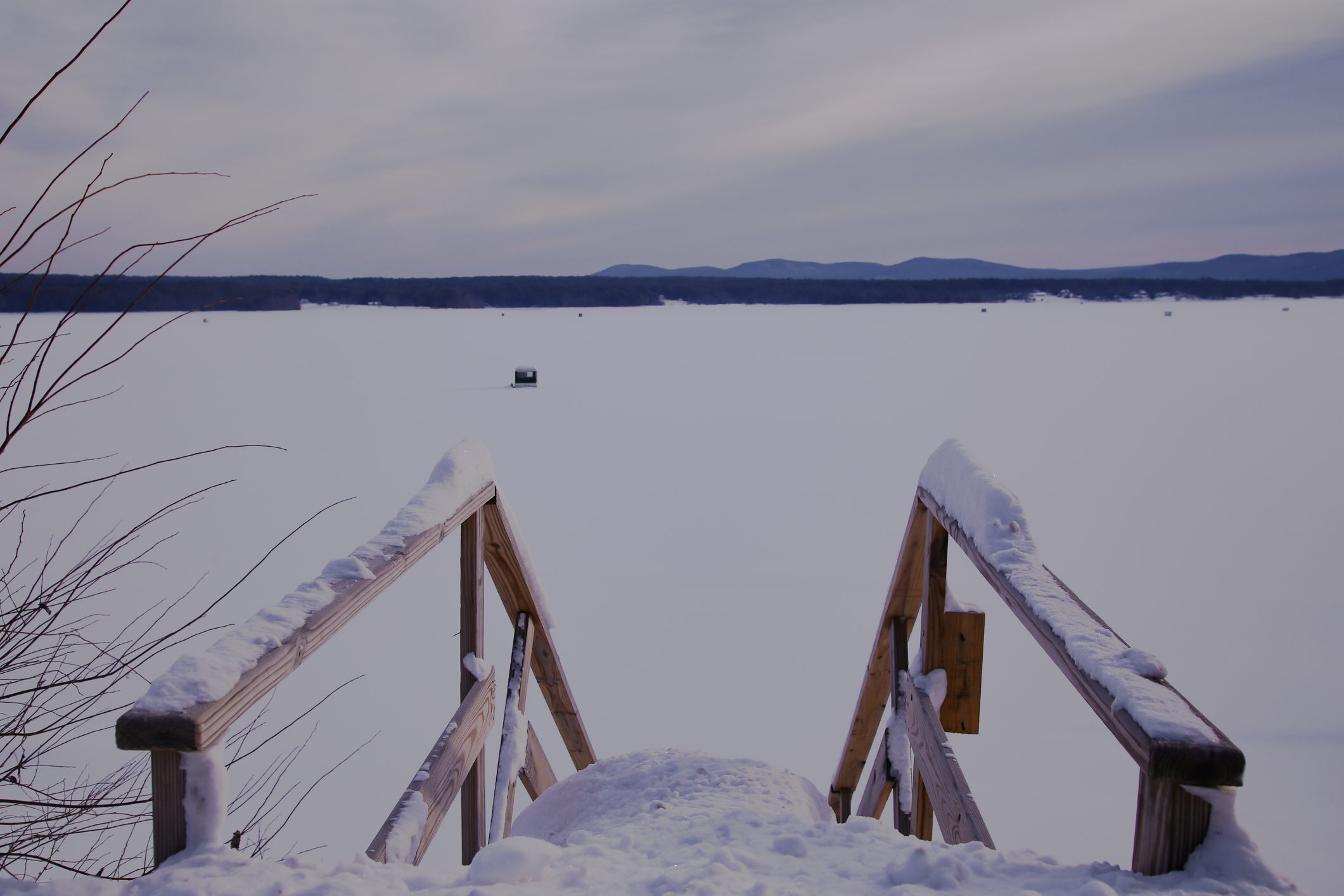 It’s easy to get excited about the first ice of the season and especially with the past lackluster seasons we’ve had, but it’s important that you always put safety first.

Once the ice reaches a nice solid six inches of thickness, it’ll be safe rough to drive on with ATVs and snowmobiles. You’ll still want to check it every so often to make sure nothing has changed, but you should be good. After 10 inches, it’s safe enough to drive a small vehicle on. It’s recommended that you don’t wear a seatbelt and keep your windows open in the event of an emergency. Also, try to avoid parking multiple vehicles near each other.

There are endless excellent ice fishing opportunities in upstate New York for anglers of all experience levels. Many New York RV parks stay open through the winter. Plan your cool ice fishing trip and make your reservations in the following New York all-season RV parks: 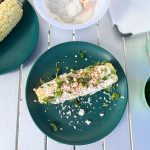 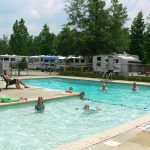