In the Footsteps of Lewis & Clark–Part 2

As a continuation of our adventure walking in footsteps made by Lewis and Clark back in 1805, we discovered some more recent controversy caused by the naming of the rivers. Lewis and Clark’s decision not to call the Jefferson River the Missouri spurred a debate over which river is to be considered the longest in North America, since the Missouri and the Mississippi Rivers are nearly identical in length. While the Missouri had traditionally been the longest, 72 miles of it have been trimmed off in more recent years in re-channeling its streambed, mainly for the many hydroelectric power plants in the region, so now it is sometimes referred to as second to the Mississippi.

State Park aficionados as we are, happening upon the Missouri Headwaters State Park while on our Montana tour was truly a gift. Full of much pent up energy after our drive from Wisconsin to Montana and our daily drives around the countryside, the kids were eager to jump out of the car and start exploring the trails and the rivers suddenly at our disposal. They got to work almost before the car was stopped!

After reading each of the exhibits and feeling the water in each river to see how cold it was, they discovered a trail that led up a small incline to a point overlooking the confluence. We hiked up to enjoy the view this fortuitously placed hill provided. Upon wandering up along the trail, they were delighted to discover a large variety of fossils in the rocks up on the small hill. This led to about an hour’s worth of scouring the site to see how many different fossils they could each find; a wonderful gift for the mother of energetic children who had been cooped up in a car too long. And a lesson they will not soon forget.

In fact, when we returned home from our trip, our son’s class began studying the journey of Lewis and Clark and, having just witnessed one of their important discoveries first hand, and read a book on the way home describing more of their adventure, my son aced his class! There is nothing like personal experience to make history come alive. Talk about an immediate return on your investment! 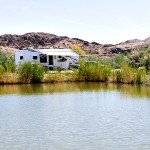