GETTING TO THE BOTTOM

We’ve seen a lot in the past few days — taken a boat ride, toured two towns, passed by covered bridges and lighthouses … hard to keep track of all that’s happening so fast.  BUT, today was a highlight. 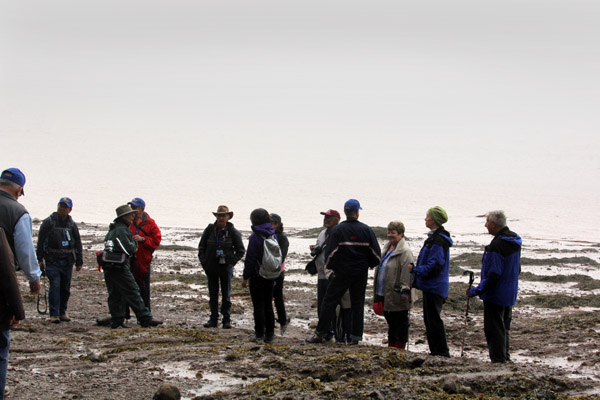 Saturday morning dreary skies with intermittent rain let up long enough for us – our caravan buddies and us – to walk down the steps onto the bottom of the Bay of Fundy.  In case you’ve forgotten from your school days, this bay features the greatest tidal change in the world – up to 52 feet, or 46 where we are now in Hopewell Cove, New Brunswick.

As I rode in a powerboat into the tidal change, I was impressed with the whitewater surge sweeping under and around our boat, with its eddies spinning us a bit.  Impressed, but 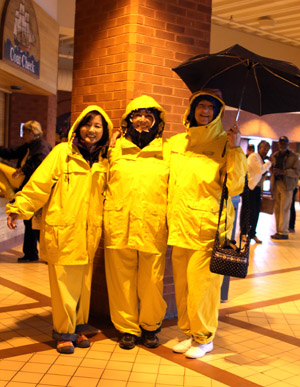 Able-bodied seawomen Stephanie, Monique and Renie prepare to cast off

not excited.  Today, however, having walked the seabed along the shoreline cliffs and unconnected monoliths of the bay I appreciated the opportunity of doing something new and different.

The unique funnel-shaped bay receives and exhales 100 billion tons of water each day during its two tidal changes.  From its rocky beach-like bottom, it filled up to 42 feet in six-plus hours today before retreating to being low and dry … well, not really dry, more like rock and muck with patches of thick seaweed … for about six more hours.  The change and timing are attributable to the phases of the moon.

After having “feet-on experience” (while wearing watershoes), we watched time-lapse films of the transition on UTube.  Interesting, but not at all the same as being here.  And, incidentally, I was amused when our park interpreter showed us similar films on her IPad while standing alongside the bay.  I’m still amazed by the progress of our technological age. 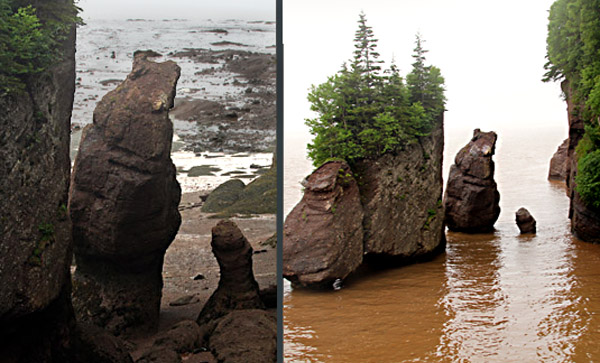 A Rock Bear stands firm as the Bay of Fundy tide rolls in from zero, at left, to 42 feet. The monolith in the middle is one of Hopewell Rocks’ famous “flowerpots.”

Monique continues to buy live lobsters for under $6 a pound, which was our entrée at last night’s dinner and today’s lunch, and 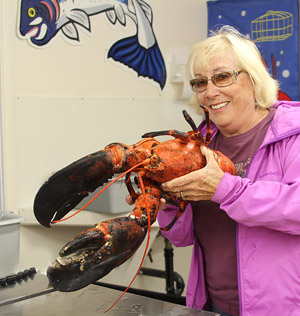 Monique realizes that this 16-pounder not only wouldn’t fit in our pot, it might not make it through the door of our travel trailer.

she continues to be on the lookout for any of the 12 species of whales said to visit the area.

I know readers in the Southwest aren’t interested in our weather right now; maybe some other folks are.  We’ve had rain and more rain, but mainly at night.  We boarded the boat to skim over to the reversing falls at St. John, New Brunswick, just as about a dozen of caravan members got off after the previous outing.  They were soaked, having left the dock before the dampness turned into a constant rain.  Our tour members left clad in yellow raingear provided by the boat operators.  We did get wet but not soaked.

More tech talk.  Most of the trip I’ve had cellphone service available, and every campground – all private parks thus far — have had at least some degree of WiFi.  I heard from our neighbors who know about such things that they are able to get satellite TV reception.  The curvature of the earth presented a problem for many in the Yukon and Alaska. 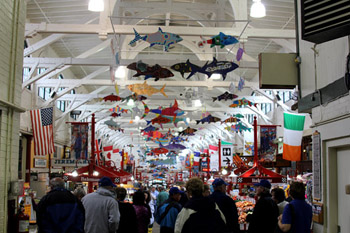 It’s difficult to leave City Market in St. John, NB, without at least one purchase.

History in these Maritime Province towns interweaves with U.S. history, especially in the American Revolution and the War of 1812, which makes it more relevant to us.  We have only gotten to New Brunswick, which, for all of us who are fuzzy on our Northeastern geography, is just north of Maine.  It’s Canadian, for sure, as easily seen on the metric road signs and strange money, but I bet it’ll get more “foreign” as we move northward, which happens Sunday, when we enter Nova Scotia. 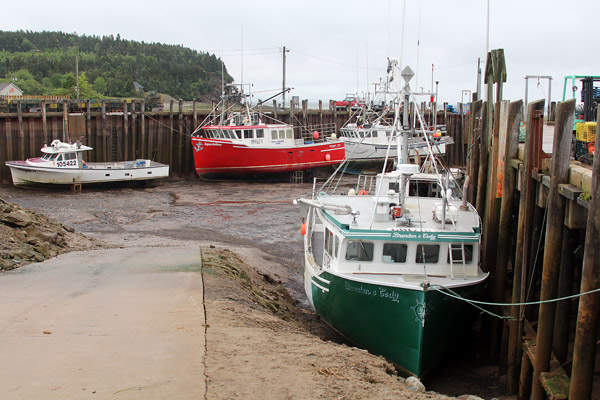 The harbor at Alma is a sad sight … until the tide rolls in and the boats put out to sea again.

Sent by Jim (with excellent photos) I read your RV.Net blog “Confessions of Contented Tourists”.  We just came back from an RV trip to Maine concentrating on a visit to the Acadia Birding Festival, a tour of the National Park and a tour of the northeast Maine coastal towns.  One thing that the birding festival caused us to do is take a boat tour to see the islands off the coast of Mount Desert Island.

Besides seeing many sea birds (including Puffins!) this trip allowed us to see the park and area from the water.

This boat trip was excellent, and I would recommend that people visiting the area consider taking one. There are several companies that run similar

trips out of Bar Harbor as well as several other harbors on the island.

When we visited the National Park we bought the CD-based audio tour and used it for our driving and walking tour of the Park. I think that this provided a lot of the information and “local color” that your tour bus guide provided but allow us to tour at our own pace. My wife and I were very happy with this audio tour and would also recommend it.

It has been many years (decades?) since we visited Acadia National Park and we regret that we did not return sooner.  The coastal towns in the area are also very scenic and worth visiting but we toured in our toad not the RV.

Because of the numerous Spam comments on this site, the comments section has been deactivated.  Please email us at [email protected] and I will pass along your comments.    Learn about Alaska and see travel photos at ontopoftheworld.bz (and much more to come when time allows). 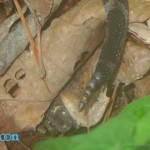