From Creative Camping to Motor Homes

I was raised camping, as a small child we would camp with a 36′ Chev and a tent. My dad became creative and made metal staves, like a covered wagon for on one of the farm trucks, and stretched tarps over them. We used that until I was 12 then he converted a 46′ school bus with beds enough to sleep 13, a stove and toilet. Our running water was a water cooler, later he converted another school bus, then he found a Dodge Superior Motor Home (we really thought we were up town). It was a 74′, we used it until a year ago when I sold the Dodge and bought a 98 Fleetwood Storm. I wish he could see the luxury that we camp in now.

Submitted by Helen Lechman of Sedgwick, CO as a part of the RV Centennial Celebration “Share Your Favorite RV Memory” contest. 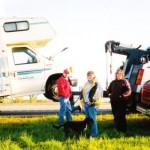