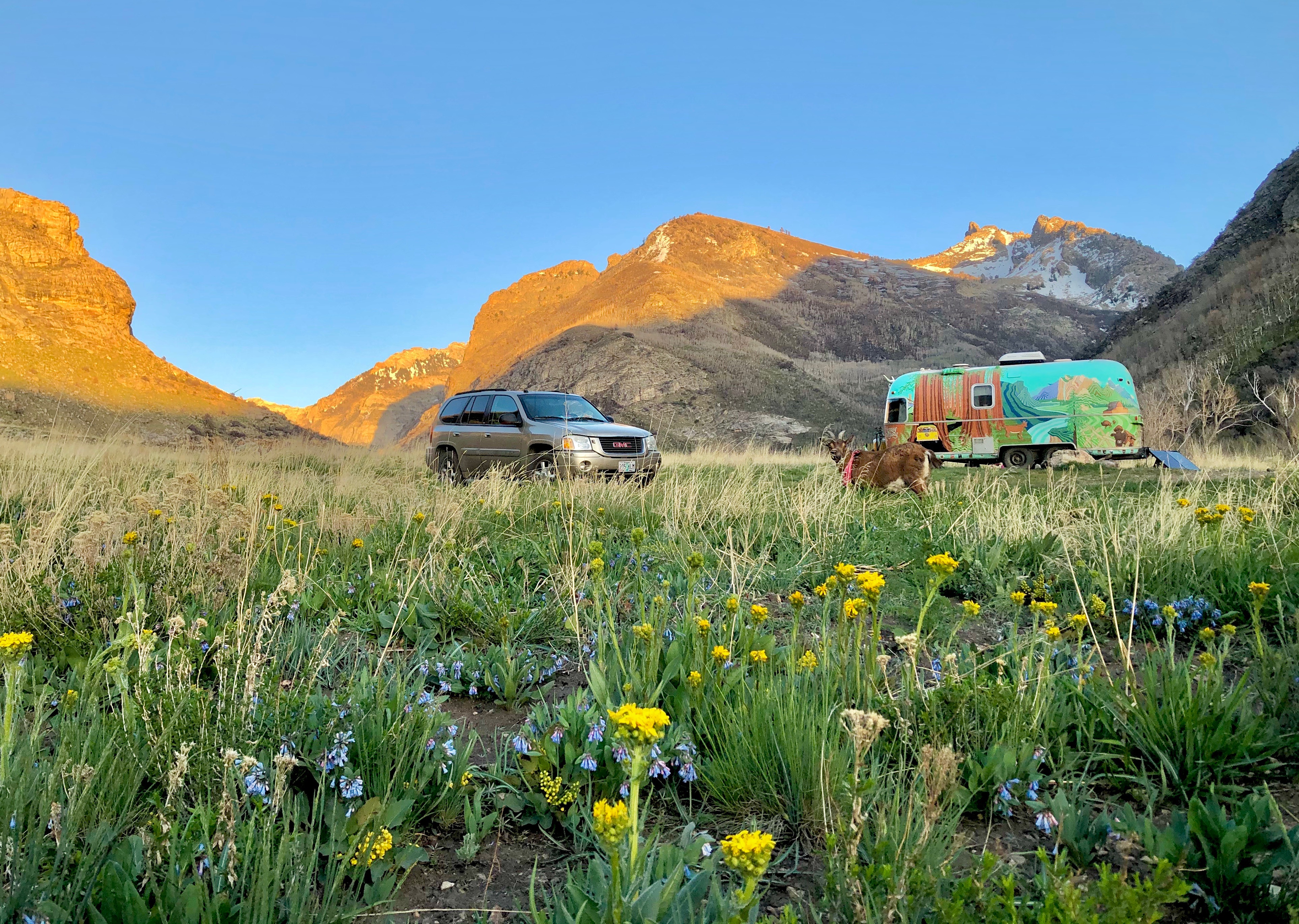 Tucked away in the Northeastern corner of Nevada lies one of the state’s best-kept secrets. Known as the “Swiss Alps” of Nevada, the Ruby Mountains are brimming with alpine lakes and streams, meadows blanketed with wildflowers, and glacial canyons and valleys home to an abundance of wildlife. While visiting the Ruby Mountains and greater Elko County, enjoy the many hot springs and ghost towns in the area as well as the rich Basque culture and culinary scene in historic downtown Elko. 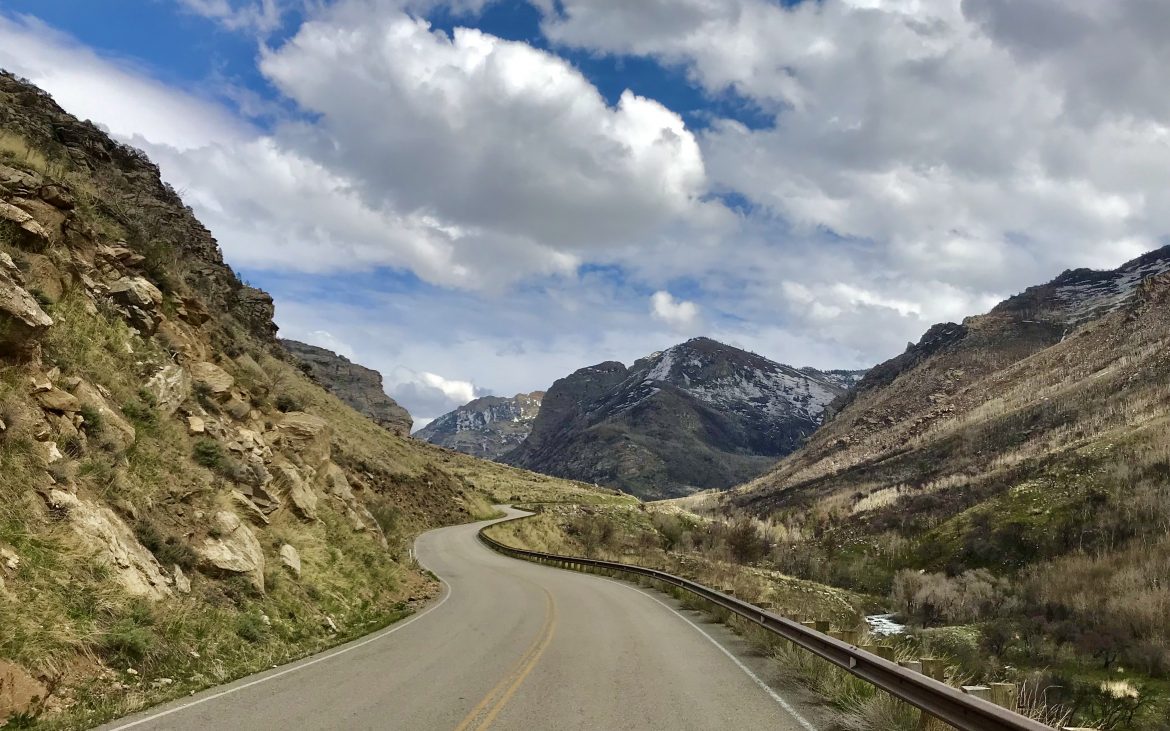 For a scenic drive that will give you a whole new perspective of this desert state, take the Lamoille Canyon Scenic Byway up to the heart of the Ruby Mountains. Located just outside of Elko, this 12-mile long drive will whisk you away from the dry and arid climate below to a glacier-carved canyon teeming with lush vegetation and snowcapped mountains. The two-lane paved road winds its way through the canyon, passing overlooks, hiking trails, and campgrounds. The drive provides stunning views of waterfalls and wildflowers throughout the late spring and summer as well as impressive displays of vibrant foliage during the fall.

On the way up, make sure to stop at Lamoille Glacier overlook, where you can witness the result of glaciers that carved the canyon over 250,000 years ago. A little further up the road is Valley View, a short interpretive trail where you can see 100-year-old Basque graffiti carved into the aspens as well as a series of impressive beaver dams lining Lamoille Creek. At the top, get a birds-eye view of the valley below as well as the neighboring peaks reaching over 11,000ft. Though the lower portion of the drive remains open during the winter months for those who enjoy to snowshoe or cross-country ski, the upper portion of the road is closed until the snow melts in the late spring. 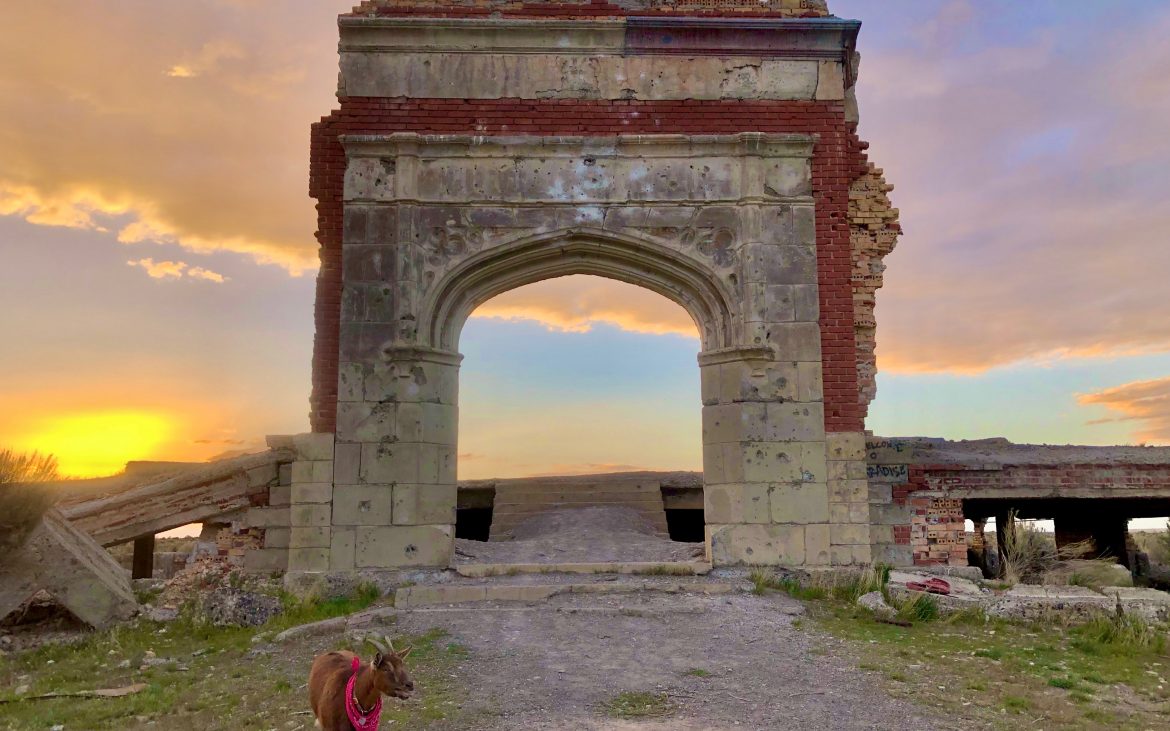 Metropolis is unusual in several ways, but what really makes it stand out is the fact it’s one of the very few ghost towns of the West that had nothing to do with mining. In 1910, the Pacific Reclamation Company bought 40,000 acres of land northwest of Wells, Nevada with plans of making a modern farming community.

They created an intricate irrigation system along with a dam along Bishop Creek and provided the town with a modern hotel, school, post office, train depot, and a multi-purpose amusement hall. A few years later, the Southern Pacific Railroad built a spur to the town, which in turn, created a population boom. In its heyday, the population peaked around 700 people, many of whom were Mormons from Salt Lake City, hoping to start a new life at this would-be farmers paradise.

However, their luck faded fast when the town fell victim to a perfect storm of devastating events. The first major blow was when the town of Lovelock, which was 200 miles downstream, sued the company for infringing on their water rights. The Pacific Reclamation Company lost due to the fact they never secured their rights for Bishop Creek in the first place. Around the same time, a Typhoid epidemic wrecked havoc on the town, and if that wasn’t bad enough- after the farmers killed off the coyotes, the jackrabbit population decimated the town’s crops along with the Mormon crickets.

The company declared bankruptcy in 1920, the railroad discontinued service, the hotel burned down in 1936, and the school taught its last class in 1947. And that was the end for Metropolis.

Today, you can take a 20-minute drive from Wells to visit the ghost town. The only structures still standing are the ruins from the school, hotel, and the nearby cemetery.

Nevada is a hot springs hotbed, and Elko County is no exception. One of the best soaking opportunities can be found at Twelve-Mile Hot Springs, located along Bishop Creek outside of Wells. The hot spring is a primitive man-made concrete pool that sits along the creek in a scenic canyon. This long, gravel bottomed spring hovers around 100 degrees Fahrenheit and boasts crystal clear water that leaks through the rocks. The road is rough, so high clearance vehicles are recommended or you can park along the road and follow the creek to the hot spring. It’s a popular place for hikers and along the way, you can see the old dam that was built for Metropolis Ghost Town. This route was also part of the California Trail that led settlers to the Golden State over 150 years ago.

Another place to soak that’s considerably more remote is Ruby Valley hot spring. Located in the middle of a marsh that borders Ruby Mountain Wildlife Refuge, this hot spring is a series of pools of varying temperatures. The main one is large and deep with temperatures ranging between 101-103 degrees Fahrenheit. While there, enjoy watching the migrating birds, pronghorns, and mule deer that inhabit the area. As always, check the water’s temperature before jumping in.

Situated along the Humboldt River with the backdrop of the towering Ruby Mountains, Elko is halfway between Reno and Salt Lake City. An oasis in the Great Basin Desert, the town encapsulates the iconic “Old West” image, with streets lined with vintage neon signs and celebrations like the National Cowboy Poetry Gathering.

Though the historic California Trail went through modern-day Elko, the town wasn’t officially established until 1869, when the railroad expanded from California to Utah, bringing miners, ranchers, rail workers, and immigrants to the area. One of the most unique aspects of the town is the Basque heritage, which is very much ingrained into Elko’s cultural fabric. Walking around downtown, you’ll see several murals celebrating Basque culture and history in the area.

The Basque people, who originated in the Pyrenees Mountains that border Spain and France, began moving to Northeastern Nevada during the 19th-century gold rush. When these Basque prospectors couldn’t make ends meet at mining, they returned to sheep herding. Today, thousands of Basque descendants live in town and hold the annual National Basque Festival, celebrating their culture with large family-style meals, ceremonies, and performances. While visiting Elko, you can experience Basque cooking firsthand at the famous Star Hotel or a Basque-style sandwich at Ogi Deli.

Towering over the town of Wells, Angel Lake is a pocket of paradise at 8,500 feet. This pristine alpine lake offers visitors a chance to see wildlife like bighorn sheep, pronghorns, and mountain goats as well as outdoor recreational activities like camping, fishing, hiking, and stargazing.

Just outside of town, you can access the 11-mile long road that climbs up to the Angel Lake Recreation Area and enjoy long-range views of the different mountain ranges in the area. The lake offers spectacular fall foliage as well as a dazzling array of wildflowers during the late spring and summer and is an excellent place to escape the summer heat.

Historic Spruce Mountain and Monarch Mine 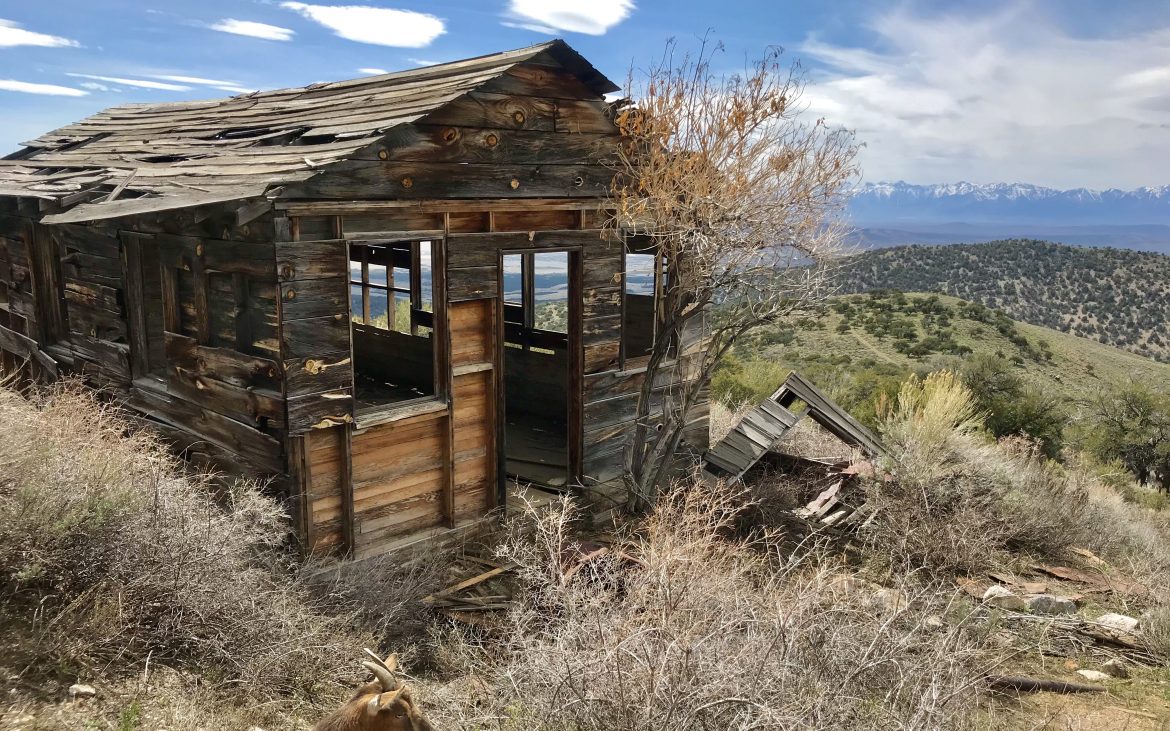 Arguably the best-preserved ghost town in Elko County can be found at the Spruce Mountain complex, where you can explore buildings, ore shoots, and mines from several abandoned mining encampments. The adventure starts 40 miles south of Wells as the road winds its way up the mountain, offering fantastic views of the Humboldt Range and Clover Valley below.

Dating back to 1869, when lead-silver ore was discovered at the Latham mine, prospectors began flocking to the area with dreams of striking big. Within a few months, around one hundred miners were working claims on the western and eastern slopes of Spruce Mountain and several new mines were erected. A year later, the different mining districts were consolidated into one district called the Spruce Mountain Complex, which included Ada H mine, Standard mine, Fourth of July mine, Juniper mine, Badger Lead mine, Black Forest mine, Jasper mine, and Latham mine.

In 1930, low lead prices caused many of these mining companies to fold, and several mines stopped production. Though 1945 was the biggest yielding year for Spruce Mountain, all serious mining ended by 1952 and the land was taken over by the BLM.

When you visit today, the gravel road to the first town of Sprucemont is in excellent condition and provides several great boondocking opportunities along the way. Further up the rough road, high clearance vehicles or ATVs are needed to get to Monarch Mine, or you can choose to hike. 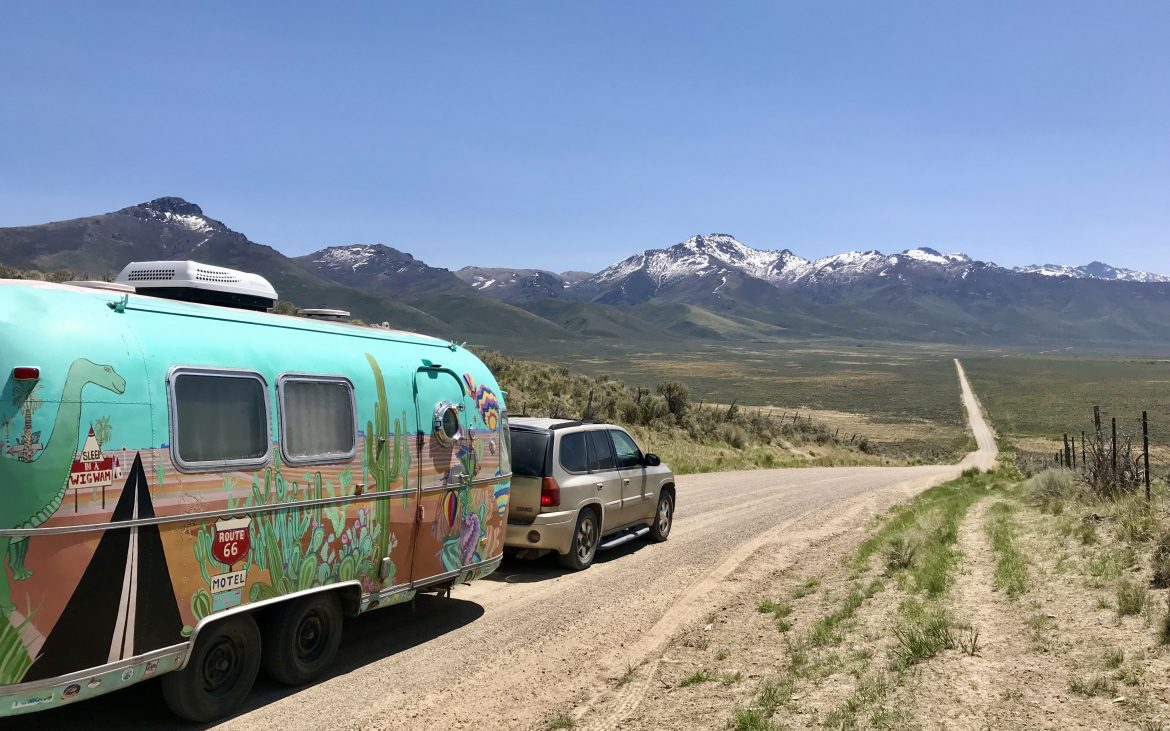 Considered to be the most isolated area in the lower 48, Jarbidge Wilderness in northern Elko County, is the perfect place to escape the summer crowds and enjoy over 113,000 acres of rugged beauty. With staggering snow-capped peaks and hoodoos, 6,000-foot deep gorges, wildflower meadows, and pristine lakes and streams, Jarbidge offers endless outdoor recreation opportunities.

The closest amenities to the wilderness area can be found in the unincorporated town of Jarbidge, one of the most remote towns in Nevada. Originally settled in 1909, Jarbidge was a well-known gold mining town and by 1911, had a population of approximately 1,500 people. By 1941, most of the gold production had dwindled and many people left in search of other opportunities. Today, the town is home to a couple dozen year-round residents that operate a trading post, saloon, post office, hotel, and gas pump. While there, you can also tour around the old miner cabins, brothels, and jail. 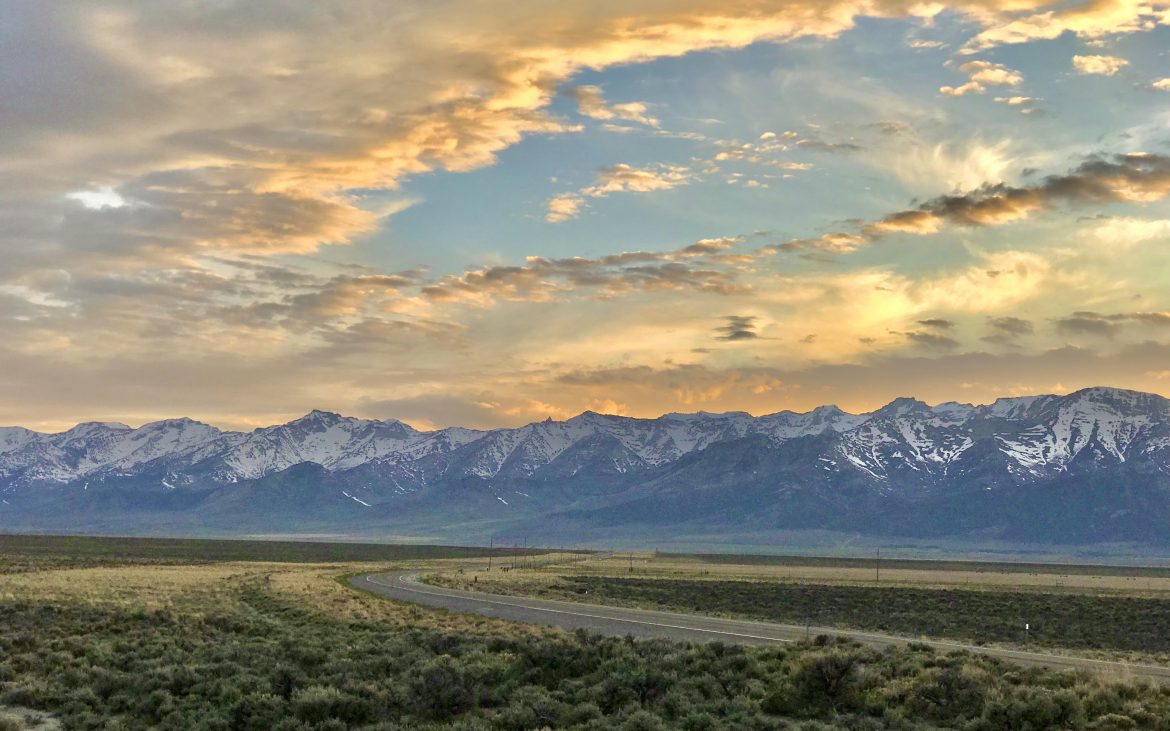 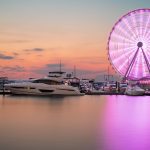