Mardi Gras is one of the largest cultural celebrations in southern Louisiana. With ample opportunities to hear Louisiana music, see the pageantry of parades and visit with locals. Mardi Gras is the perfect time to take a Bayou Country Vacation in Houma, Louisiana. Mardi Gras is known as a season of decadence and indulgence, so join us for this culinary guide to the festivities. 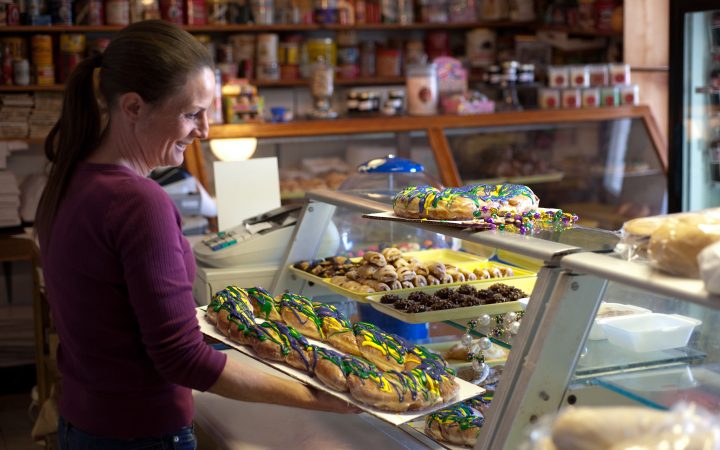 When visiting during Mardi Gras, one must try King Cake. This traditional carnival pastry is made of a sweet dough, rolled in cinnamon and topped with royal icing and colored sugar. It is the quintessential bite of this decadent season. Looking for the best place to get one? Try a local grocery such as Cannata’s Family Market or Rouses Market. If you’re adventurous, try out one of the many different fillings these bakeries offer such as the award-winning snickerdoodle gooey butter.

This year’s Mardi Gras will be early, with parades starting in Houma on February 2nd. Cold weather is gumbo weather in Louisiana’s Bayou Country, and Mardi Gras is the perfect time to grab a bowl. This slow cooked favorite is a hearty soup made either chicken and smoked sausage or fresh seafood. Either way, it is a great way to warm your body after a cold day on the parade route. For a perfect bowl, try out any one of our authentic Cajun restaurants such as A-Bear’s Café in Downtown Houma or Boudreau and Thibodeau’s Cajun Cookin, which was recently featured on Travel Channel’s Food Paradise.

Our favorite Mardi Gras dessert, King Cake, has recently made its way into many creative places on local restaurant menus. For example, try King Cake bread pudding with delicious white chocolate sauce. Dishes such as King Cake burgers, King Cake macaroons and even deep-fried King Cake have become staples in this creative and quirky season.

After Mardi Gras, many Houma area citizens observe the Lenten season, during which fatty foods and meats are traditionally given up. Before that season though, Cajuns go hog wild. Stop by Bourgeouis Meat Market or Cajun Meat Market for boudin, a pork and rice sausage. While there, why not try out grattons. Similar to a pork rind, these crunch bits of fried pork skin are a snack during a traditional Cajun boucherie, pig roast.

Have we mentioned that we love King Cake?

If you would like to try the sweet treat, but looking for something nontraditional, many Houma area bakeries have you covered. For example, Mr. Ronnie’s Famous Hot Donuts creates king cakes by decorating their delicious glazed donuts with Mardi Gras colors. Bertinot’s Best Bakery forgoes the traditional cinnamon dough for a less sweet French dough called Chix de Femme. With a slight taste of honey, this bakery allows you to enjoy dessert without the guilt.

If there is one thing we can guarantee about the Houma area, it is that you will not leave hungry. Visit us during Mardi Gras, February 2,2017 – February 13, 2017, for a delicious bite of Louisiana culture. 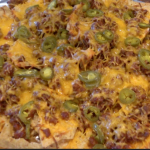 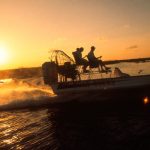 6 Ways to Enjoy the Fall in Bayou Country – Houma CVB

Discover the Spirit of Lafayette at these 2018 Festivals!