Dive Into Door County, Wisconsin, for the Best Lighthouses, Fish Boils and Shipwrecks 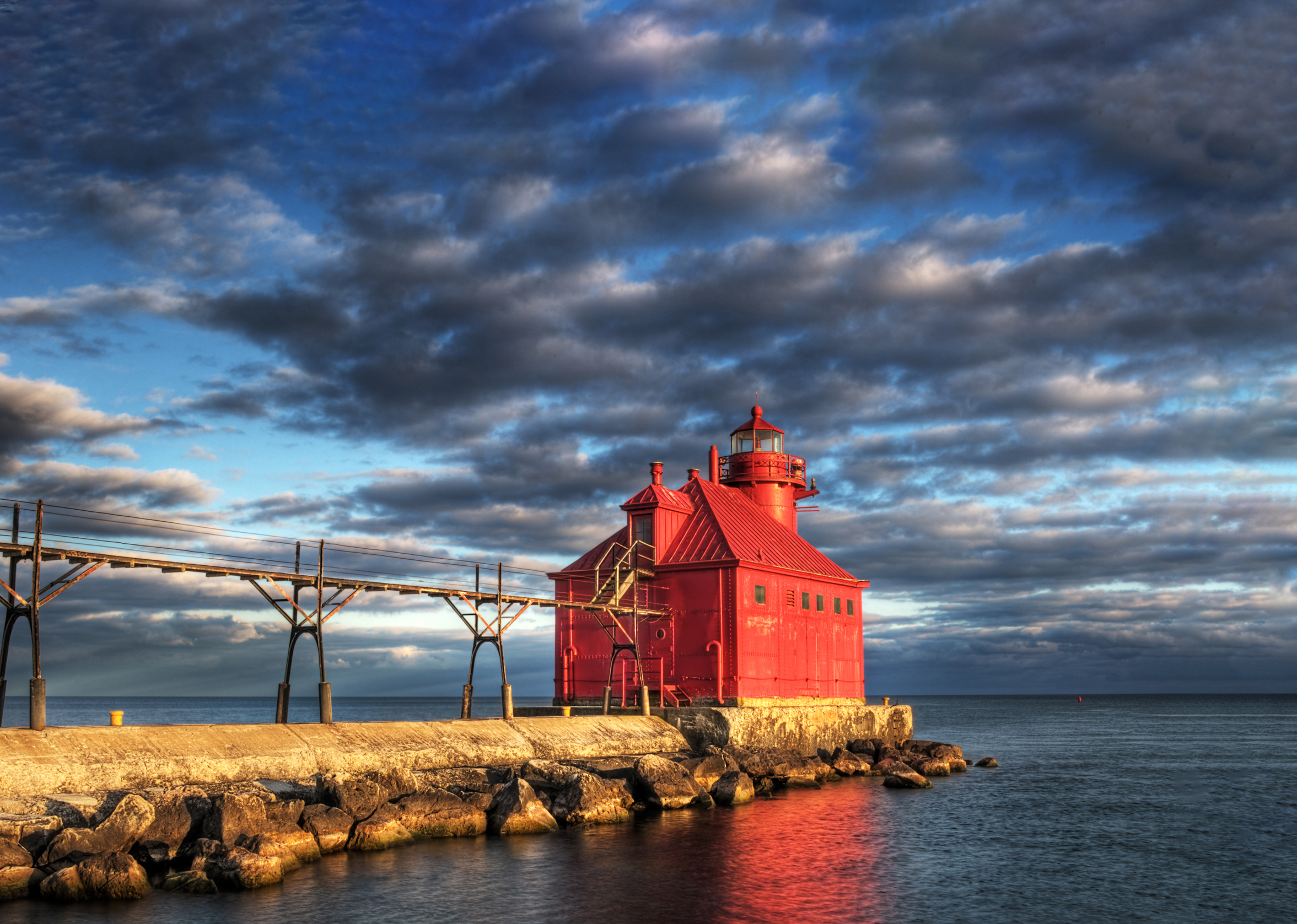 Door County, a peninsula along Wisconsin’s eastern shore of Lake Michigan, is a hodge-podge of orchards, lighthouses and state parks, all nestled within a landscape that harkens back to a simpler time. The region is also a haven for lake lovers and watersports aficionados who arrive each summer to enjoy the more than 300 miles of pristine shoreline. Whether you’re looking for fun-in-the-sun or laid-back luxury, life just seems a little easier in Door County. 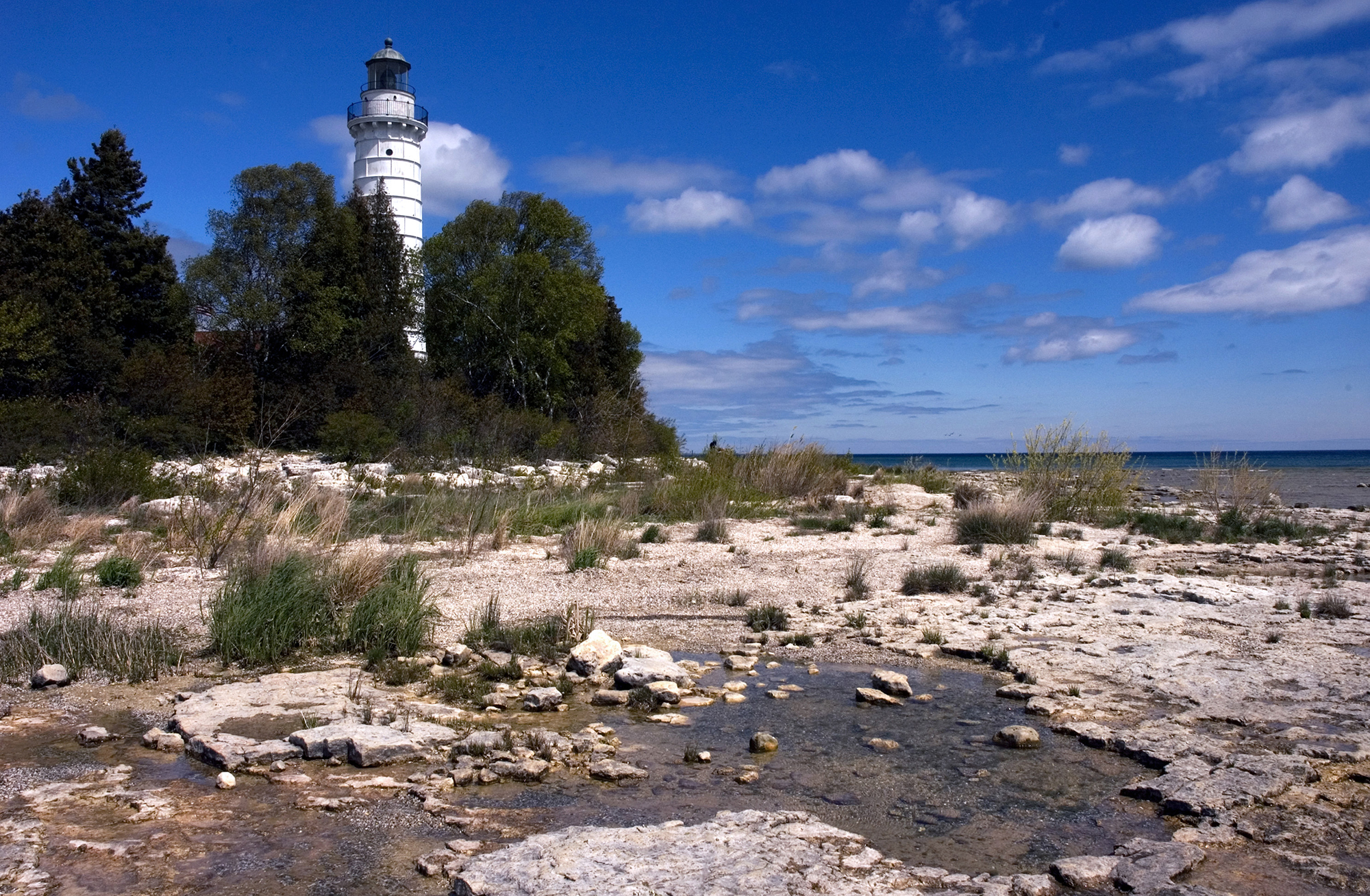 Getting its name from the 19th-century ship captains who called the waters around its northernmost point “Porte des Morts” — or “Death’s Door” — it’s no wonder that the coast of Door County is dotted with lifesaving lighthouses. These days, touring all eleven is the perfect introduction to the region’s quaint waterfront towns. Sturgeon Bay, the county’s largest, has three lighthouses, as well as quirky boutiques, carriage rides, and plenty of boating opportunities. Farther north, the lighthouses around Bailey’s Harbor are easily accessible, with many open to the public. The most photogenic of the bunch, the Cana Island Lighthouse, lies just off the coast and can be waded to during low tide. More remote lights, like the Chambers Island Lighthouse and the Pottawatomie Lighthouse on Rock Island, are only accessible by boat or ferry. 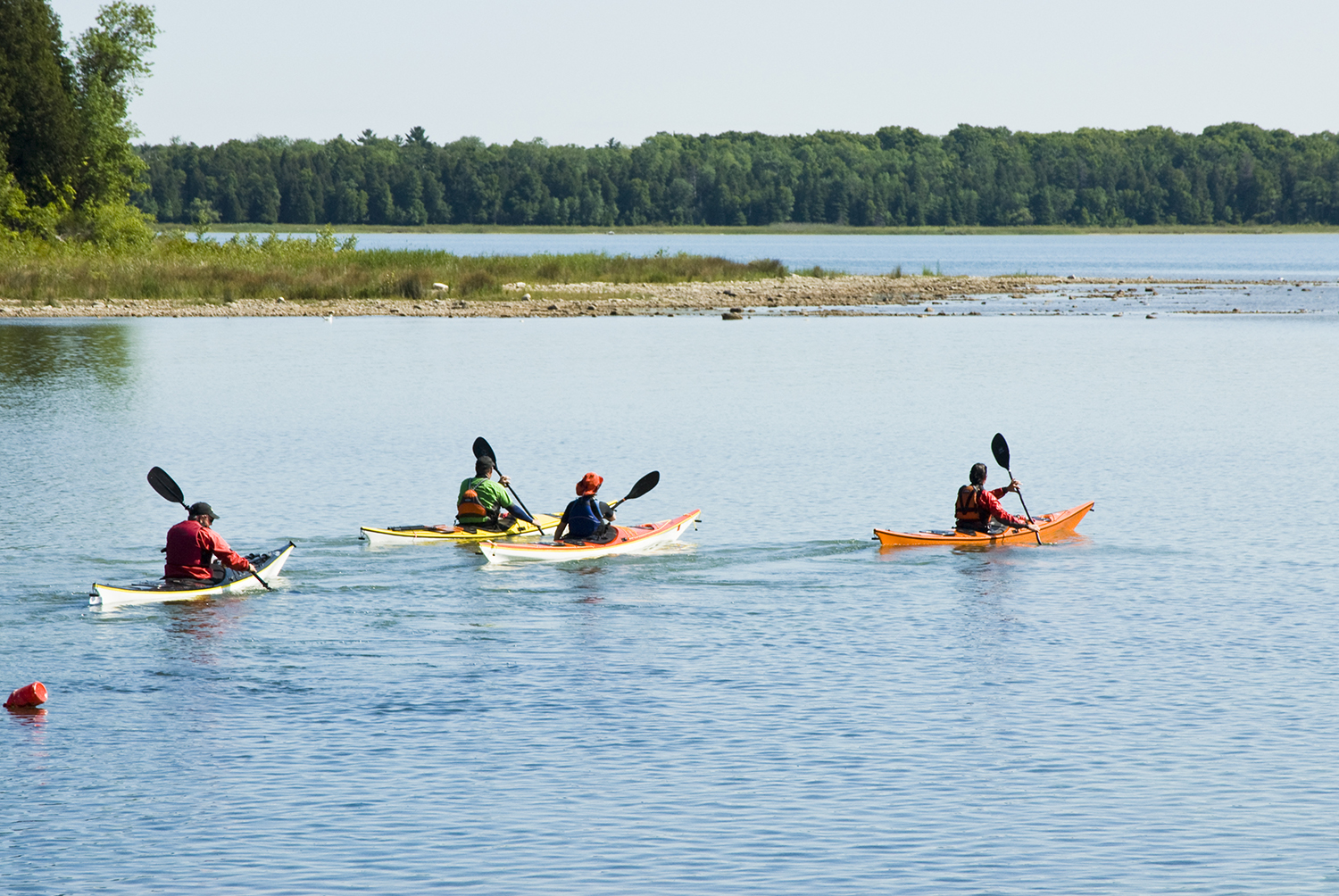 To learn more about the region’s longstanding relationship with Lake Michigan and beyond, head to the Door County Maritime Museum in Sturgeon Bay. Exhibits at the waterfront site include deep dives into the area’s long history of shipbuilding, its most fantastic captains and craftsman, and a growing number of workshops and classes for those looking to gain hands-on experience. At the northernmost tip of the peninsula, in the small fishing town of Gills Rock, the Death’s Door Maritime Museum offers up insight into the shipwrecks and storms that have come to define the region’s waterways. You can explore a 45ft wooden fishing tug, see artifacts from decades old wrecks, and learn more about the finely-crafted lenses used in the nearby lighthouses. Amazingly, many of the most prominent shipwrecks are submerged in less than 60ft of water, which means that kayakers and snorkelers can see them from the surface when the water is clear. Join a guided boat tour or scenic cruise for an even closer look. 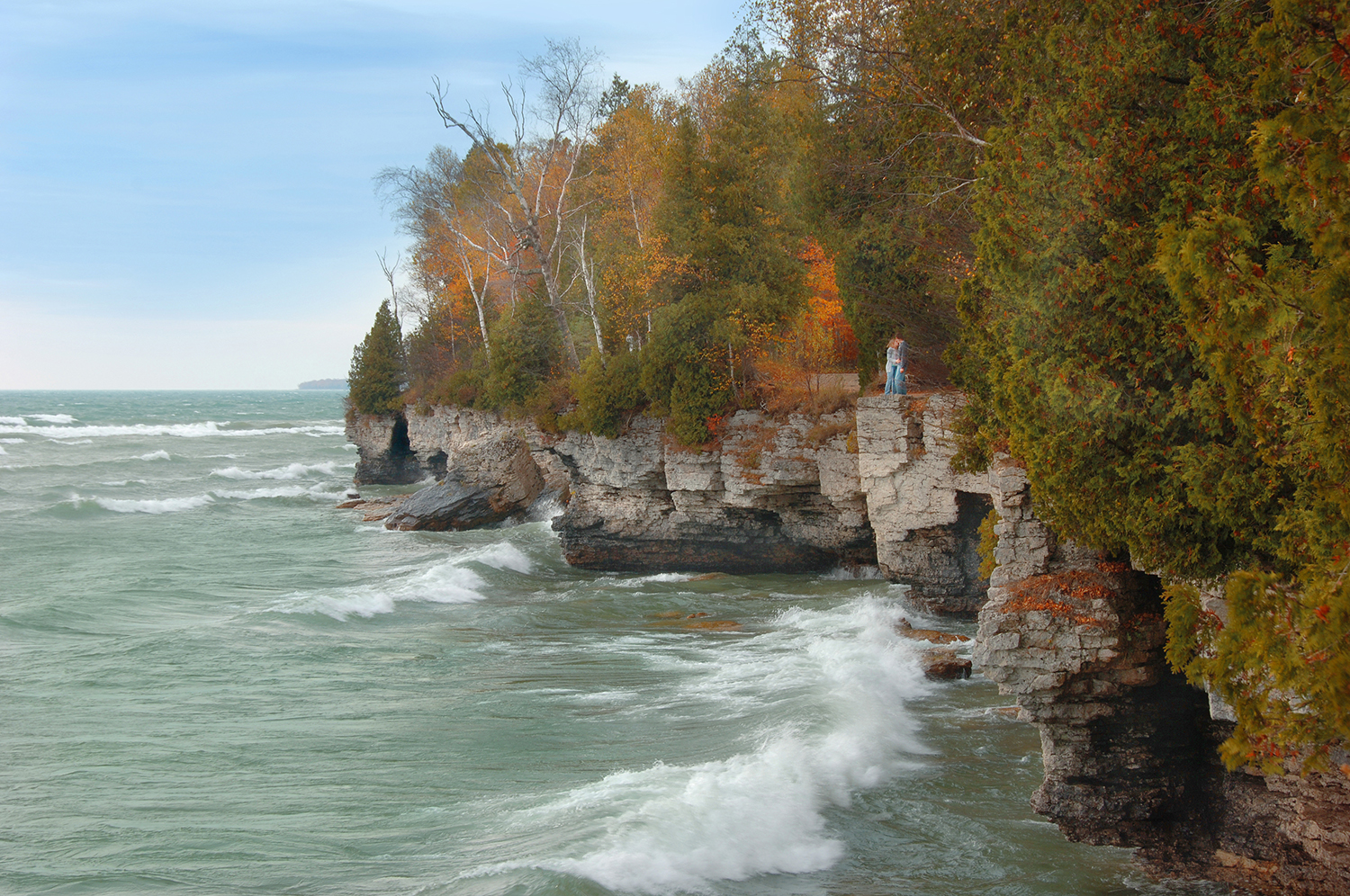 On the shore of Lake Michigan

Boasting five state parks, 19 county parks and an endless supply of local green spaces, Door County is an outdoors lover’s dream. Whitefish Dunes State Park on the windblown shores of Lake Michigan offers up a mile of sandy beachfront, fourteen miles of hiking and biking trails, and plenty of rugged coastline to explore. Peninsula State Park is one of Wisconsin’s most popular camping grounds, with year-round nature programs, hiking and biking trails, fishing, swimming, and more. Potawatomi State Park is equally renowned with trails that lead to dramatic cliffs and hidden vistas throughout the park’s sprawling 1200 acres. For a different perspective, take to the water on a guided kayak tour of thunderous Cave Point, before exploring the stunning headlands via the 1.6 mile Lakeside Trail. For a more remote setting, try Rock Island State Park, where you’ll have ten miles of trails and easy access to fishing largely to yourself. 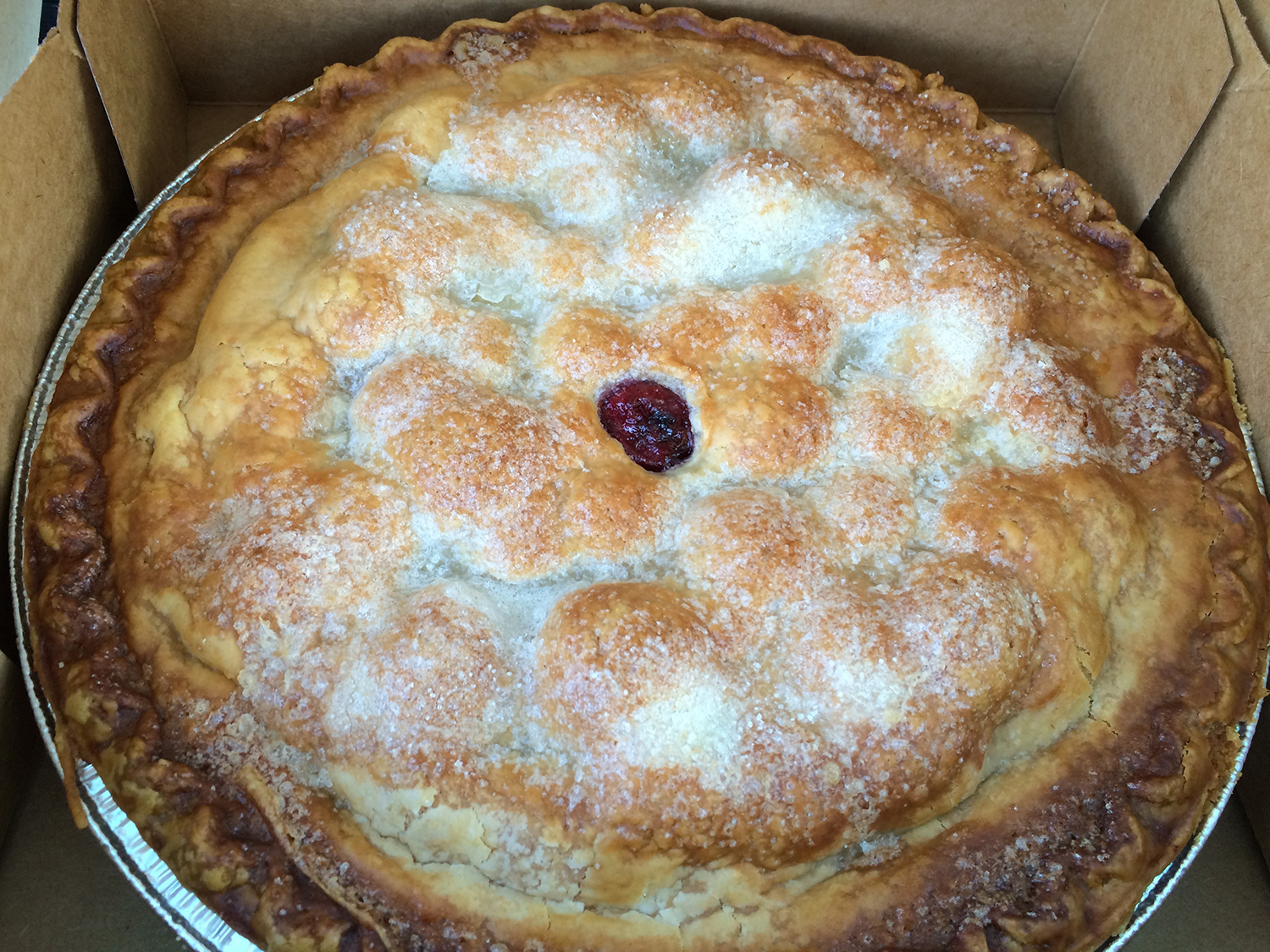 Not unlike the local cherries that dominate pies and tarts throughout the spring and summer months, Door County’s reputation as a foodie destination continues to grow year after year. Recently, wine making has taken over as one of the region’s biggest draws. Travel the Door County Wine Trail for the chance to tour and taste from eight different wineries throughout the region. Along the way, you’ll be tempted to stop at some of Wisconsin’s most revered restaurants. The White Gull Inn in Fish Creek hosts popular fish boils, while Wilson’s, an ice cream parlor founded in 1906, draws the crowds to Ephraim, a small town with a white-frame houses and a New England feel. In Sister Bay, Al Johnson’s Swedish Restaurant is rightly renowned both for its pancakes and the goats that dine on its sod-covered roof. There’s always a line, but this one is worth the wait.

No visit to Door County is complete without enjoying a good, old-fashioned fish boil. Put on by local restaurants, the traditional feast involves diners gathered (at a safe distance) around a large cauldron containing chunks of cleaned fish, onions and red potatoes. Proceedings reach a climax when the boil master adds more kerosine to the fire, resulting on a burst of flame that brings the pot to a foaming boil. The fresh flavor of the resulting meal is equally spectacular. Make a reservation to enjoy this fantastic regional feast.

Bring Your Thirst for Beer

At the end of a busy day, there often is nothing better than a nice adult beverage, and Door County has offerings for you. If beer is your thing, make sure to check out Door County Brewing Company. The Baileys Harbor brewer, established in 2012, has made a tremendous reputation for itself as a maker of distinctive beers. The taproom serves up a number of selections for the sophisticated beer sampler, including farmhouse ale, a pale ale, a smoked imperial stout and a witbier.

Don’t leave Door County without taking in the fruit of choice in the region: the cherry. Because of the region’s distinctive geography, climate and soil, cherry trees grow in abundance. As a result, Door County features over 2,500 acres of blossoming cherry orchards, and visitors flock each year to pick the harvest. If you are visiting during the summer, make sure you make this Door County tradition part of your itinerary at a destination such as Choice Orchards or the aforementioned Orchard Country Winery & Market. 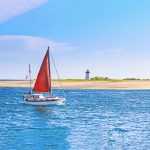 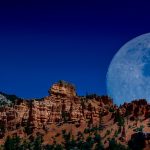 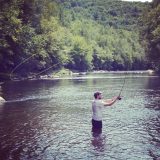 James Donahue is a writer and outdoors enthusiast whose travels have taken him to 45 states and nearly as many countries around the world. When he's not hiking, biking, or fly fishing (or writing about all three), you can usually find him exploring the beaches up and down the East Coast with his wife and daughter.