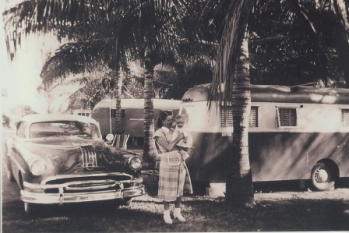 My first experience was in December 1954 at the ripe old age of four months. Earlier that year, my dad had bought a 1949 Pace Arrow travel trailer. He often wondered if it could have been a forerunner of the modern Avions, due to the curved top. The photo shows my mom holding me at our campsite near Jupiter, Florida. She remembered being very impressed with the palm trees and orange groves, which being from New York, she had never seen before. The trailer is in the photo, along with our tow vehicle, a 1953 Oldsmobile.

The trip went so well that not long after, they took a three-month trip to California and back in this same car and trailer. My mom washed cloth diapers at roadside parks and strung them on a line in the trailer to dry while they drove. No disposables then! They would drive for a few days, then find a nice campsite and stay while my dad did small carpentry jobs to earn some gas money, then we would be back on the road again.

Near Pasadena, California he was offered a job as a maintenance foreman for a big amusement park that was opening. He figured it would not come to much, so he turned it down and we returned to New York. Much later he learned that the amusement park was actually Disneyland!

Submitted by Carla Mallinson of Salisbury, NC as a part of the RV Centennial Celebration “Share Your Favorite RV Memory” contest. 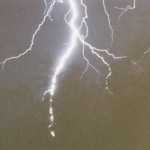