Fine Dining Aboard the MS Chi-Cheemaun in Ontario 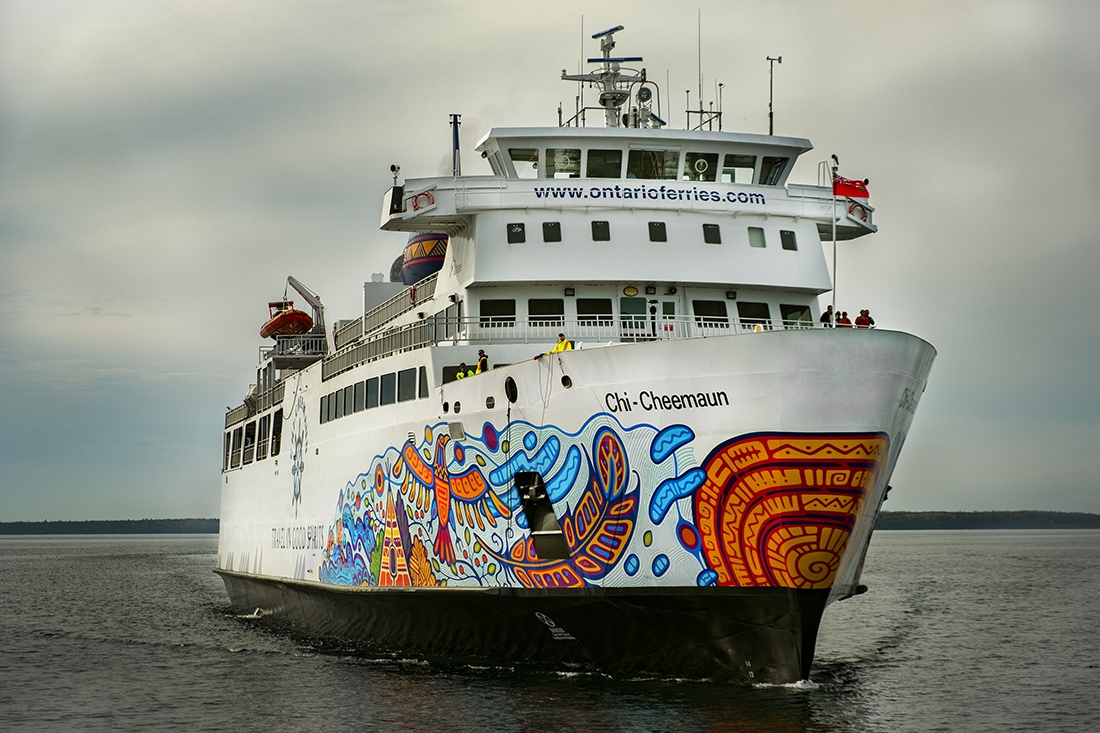 They start taking your orders after the ship has left the dock in Tobermory, Ontario. There’s a choice of soup or salad, and an entrée – prime rib or duck, and catch of the day. There’s a chef’s special – chicken curry for this voyage – with menu options meeting all dietary needs. And then there’s the cheesecake at the end. I’m told there’s no way they can take that off the menu. It’s just another day of fine dining aboard the MS Chi-Cheemaun ferry in Ontario.

Navigating the waters of Georgian Bay and Lake Huron and run by the Owen Sound Transporation Company, the MS Chi-Cheemaun has been ferrying vehicles between Tobermory, at the tip of the Bruce Peninsula, and South Baymouth on Manitoulin Island since 1974. The current vessel is just the latest of a long line of ships that have sailed that route since the 1920s. Cars still line up on the docks from May to October every year – at the height of the summer season you need to be there at least an hour early – but the ship has become a destination on its own for both locals and tourists, which is why we’re choosing our wine as Doctor Island slips past by the windows on the port side and the evening’s sunset dinner cruise begins.

We pass more islands, with white-painted lighthouses and red-roofed outbuildings hugging the shore in front of thick stands of trees, when the soup and salad arrives. The red onions in the spinach salad are sweet, the poppyseed dressing tart with citrus. Outside the skies are low and streaked with pale blues that mirror the water. 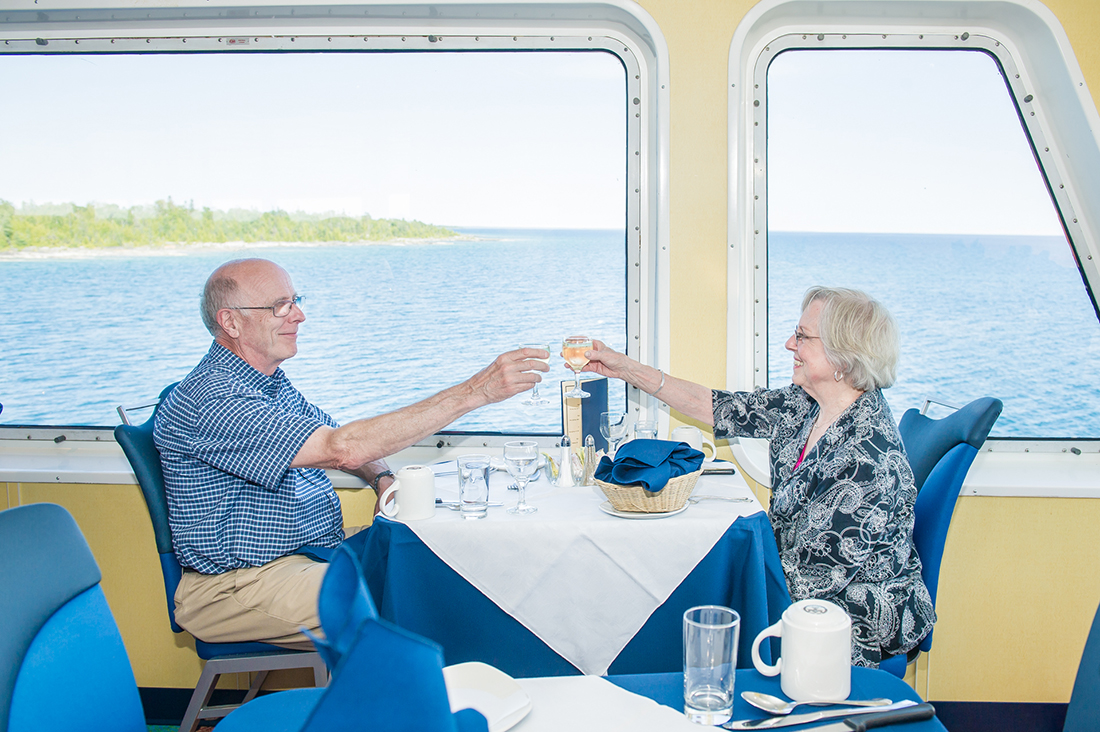 Chef Andy Mackey has been in the kitchen of the Chi-Cheemaun for over twenty years, as long as they’ve been offering the sunset dinner cruise, but it became more of a feature a few years ago, after a refresh of the ship’s interior that also added colorful, Ojibwe-inspired artwork to the bow and funnel that’s become the ferry’s trademark.

Everything is prepared in the galley kitchen of the ferry, and Andy is on the boat cooking four hours before dinner service begins. It’s still the offseason, so dinner cruises are only offered on Friday evenings, but when cottage season starts from mid-June to early September he’s at work four days a week – Monday, Wednesday and Saturday on the evening trip from Tobermory to South Baymouth, and Thursdays in the late afternoon leaving Manitoulin. 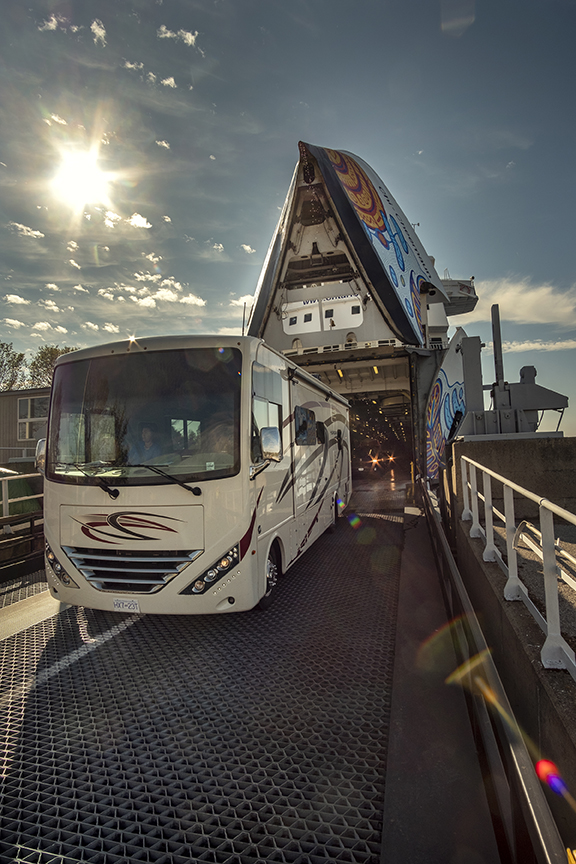 An RV drives off the MS Chi-Cheemaun ferry docking after its voyage.

Thursday, he says, is always busy.

Things get even busier four nights every summer when the dinner cruise is paired with a concert in the Fathom Five Lounge upstairs. This summer’s shows feature national acts like Calgary’s Reuben and The Dark and Vancouver’s Carmanah.

The catch of the day today is local whitefish, a real treat, breaded and grilled and crispy on the outside. Mackey says that he tries to source as much as he can locally, like the berries in the vegan dessert, and the beef that he gets from farms on the Bruce Peninsula when it’s available.

Even the liquor list is local, with craft beers featured and wine from Coffin Ridge Winery, just near Owen Sound.

Mackey pulls out a book from behind the bar and runs through a list of entrees he’s had on the menu over the last year – pork tenderloin, chicken parmesan, shrimp and sole Florentine, maple-glazed Atlantic salmon (much of the crew hail from the Maritimes) and rainbow trout from Manitoulin, which he says he can get pretty much all during the summer season. There’s no schedule for what might end up on the menu, and he says his planning is pretty “offhand” – depending on what’s available.

The prime rib, he says, is always a hit.

Even the coffee is locally sourced – the ship’s own “Traveler’s Blend,” roasted by the Tobermory Coffee Company and sold in the ship’s gift shop. The cheesecake is maple caramel, and it’s easy to see why it’s always on the menu.

Dinner finishes service just before the ship pulls into South Baymouth. By now the pale blues of the sky have gotten darker and the sun is starting to fill the horizon over Lake Huron with vivid gold and yellow.

Everyone who was in the dining room seems to be out on the decks now, or in chairs by the windows. On the way back to Tobermory the sun begins setting in earnest and the evening’s show begins.

The dramatic skies over Georgian Bay have inspired another set of special cruises during Chi-Cheemaun’s high season. Partnering with the Royal Astronomical Society of Canada, the ferry is hosting Stargazer’s Cruises in early August, on the evening cruise back from South Baymouth.

With no city lights or glare from street lamps, the skies over the bay have near-perfect dark sky conditions to observe the stars. Using telescopes and the naked eye, expert hosts will help passengers understand and enjoy the spectacle.

The sun is still setting as the Chi-Cheemaun passes Fitzwilliam Island, a band of orange wrapping around the horizon to the west. Selfies get taken and cameras are trained on the sky and the water, which catches the red and gold in the far side of each shallow ripple and wave. We’re still an hour from Tobermory, in the middle of the water between Georgian Bay and Lake Huron, but this seems like exactly the place to be as night falls. 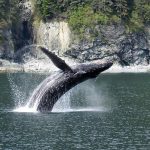 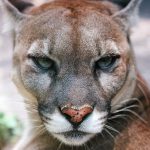