Back in the 1840s, when Grand Lake was created as a reservoir for the Miami and Erie canal linking the Ohio River to Lake Erie, it was the largest artificial body of water in the world. By 1915 trains and trucks had long since made the canal obsolete, but Grand Lake was so popular with sportsmen it was not destroyed and was instead protected for public use. A century later that is still a popular western Ohio outdoor paradise.

Celina arrived on the western shore of Grand Lake around the same time the lake formed; it is the county seat and only city of Mercer County. The town from oil deposits unleashed from Grand Lake by some of the first underwater oil wells ever dug. Today, the downtown area still looks as if it were pulled from a turn-of-the-20th century postcard. Poking around the Mercer County Historical Museum on Market Street confirms those suspicions.

The lake averages less than seven feet in depth, which makes it the ideal staging grounds for annual gathering of 1960s German amphibious vehicles known as Amphicars during the annual Celina Lake Festival. Fishermen find crappies, catfish and bass plentiful in the warm waters as well. 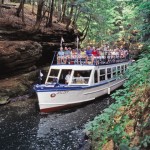 Hit the Water in the Wisconsin Dells Previous
Superlative Stays—Albany, New York Next 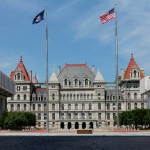