In 2004 my husband and I heard about RV trips to Alaska and decided we would like to take a trip like that. Neither of us had EVER been camping….not as children, not as a married couple and not as a family after our children were born. But, we decided we would rent an RV and take it to Alaska to experience the “last frontier”. After visiting our local RV dealer, we found it would cost us over $20,000.00 to rent a small RV for the two months we would need it, including all the taxes and other charges tacked on. After hearing that shocking news, we came up with a brainstorm….we decided we could buy an RV, take it to Alaska, sell it when we got home, and still be ahead of the game. Our family and friends thought we had lost our minds, but we were determined to take this trip.

So one weekend we traveled to Harrisburg PA where we attended a huge RV show. There we became acquainted with all types of RVs, attended seminars on how to operate them, visited vending booths selling all kinds of necessary items for RVs, and were totally exposed to the entire RV world. After much deliberation, we decided to place our order for a brand new 30 foot Winnebago Class C motorhome. Six weeks later, it arrived from the manufacturer and a new chapter of our lives began. We poured over RV “how to” books, read all the manuals that came with our RV, and decided we needed to test things out before leaving our home in Maryland, traveling across the US and Canada, and eventually arriving in Alaska.

Our first weekend trip was horrible. The site was so uneven, we couldn’t even get level. Hooking up the water and sewer for the first time was a challenge and it rained buckets, but, it was an adventure and we had fun trying out everything in our new little home. Since that first weekend wasn’t the best experience we thou! ght we should go one more weekend before heading to Alaska.

The second weekend we camped, our propane detector malfunctioned in the middle of the night. We had just settled into bed for the night when the alarm blared for the first time. Bounding out of bed, my husband silenced the alarm, but it continued to sound every sixty seconds!!! In campgrounds, campers are situated right next to each other and we were petrified we were awakening other people. So I sat beside the propane detector hitting the switch every time it sounded while my husband read every manual he could find hoping to see what the problem was and how to stop it. After three hours, he finally decided to pull the fuse and the horrendous alarm was finally silenced. A trip to the dealer the next week fixed that faulty alarm, Preparing our motorhome for the long trip took many days of loading up lots of supplies and groceries.

Finally, the day for our departure to Alaska arrived and we headed west. We traveled the US interstates, crossed the Canadian border in North Dakota, and headed west across the Yellowhead Highway. Since we were such novices, we had arranged to be with an RV Caravan tour and met up with our group in Dawson Creek. Pulling onto the Alaska Highway was such a thrill and the sights and experiences just kept getting better and better. We ended up driving on every paved road in the state of Alaska and never tired of the adventure.

The trip was filled with the most awesome scenery and abundant wildlife which is the true experience of seeing our 49th state. When our tour ended in Haines, Alaska, we, and our motorhome, boarded the Alaska Ferry System which took us down the entire inside passage. The ferry stopped at many ports along the way and we were able to spend a few hours in these unique towns before arriving in Bellingham, Washington. From there, it was a long drive east back to Maryland. By the time we got home, the camping life had grown on us and there was no way we were going to sell our wonderful little motorhome.

Since then we have taken a two month trip to the Canadian Maritimes, experienced the Polar Bear Migration in Manitoba Canada and have even joined a camping club which camps on a regular basis. Had someone told me in 2003 that a motorhome would be sitting in my driveway ready for the next outing, I would have said they were crazy. Just goes to prove you are never too old to start new things…..we were in our late 60’s when this all began!!!!

Submitted by Joan Heinicke of Maryland as a part of the RV Centennial Celebration “Share Your Favorite RV Memory” contest. 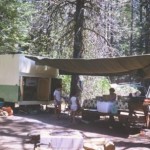