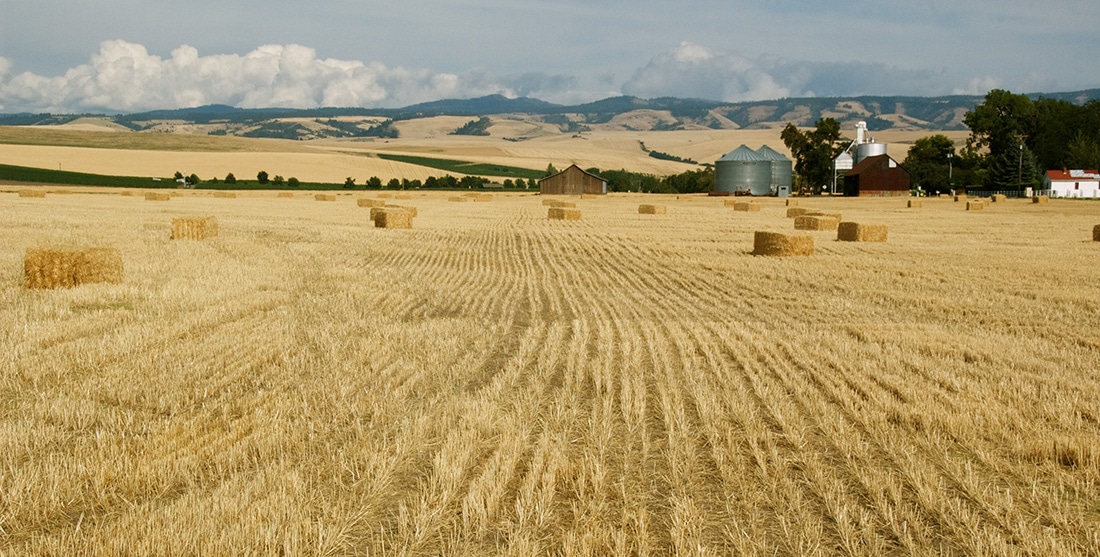 When a town is so nice it gets named twice, you know it’s something special. That’s why you shouldn’t let the off-the-beaten-path location of this special agricultural town fool you: RVing to wonderful Walla Walla, Washington, is always worth the drive.

What the Walla Walla?

Long ago when my father-in-law was alive, he told us stories about growing up in this small Eastern Washington farming community. My husband never had the chance to visit his dad’s hometown, until we became full-time RVers in 2007. We enjoyed our first trip so much that we keep going back whenever we happen to be headed in that direction. And that is perhaps the biggest challenge of RVing to Walla Walla. The quaint town of 34,000 residents is at least four-and-a half hours from Seattle or Portland, and isn’t really on the path to anywhere. You really have to want to go there, but you’ll never be disappointed when you do. 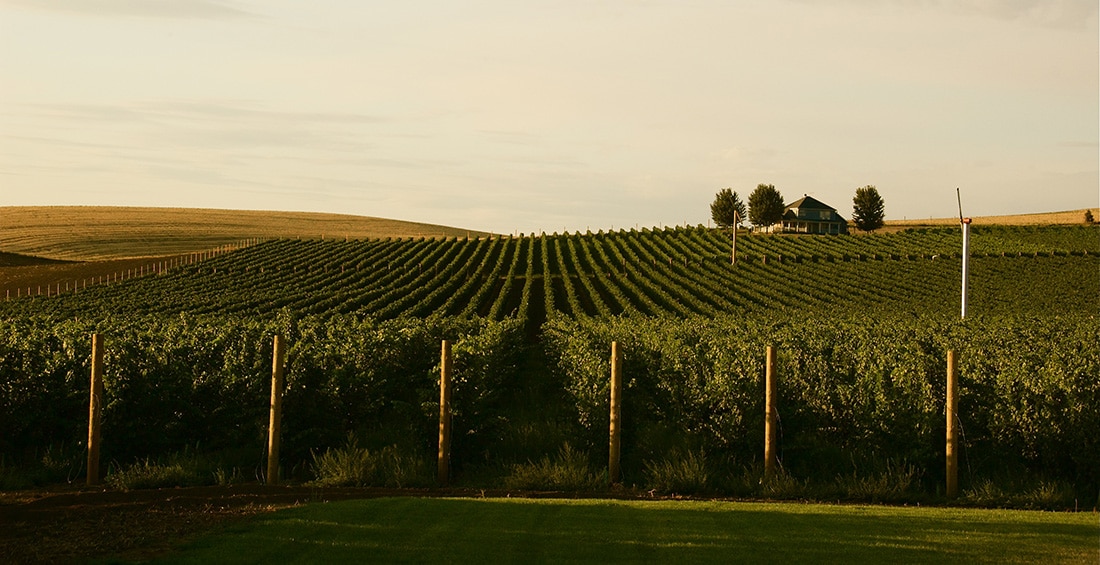 The town has one of the most unusual names in the United States, going back to the 1800s. That’s when the First Nations people, who originally inhabited this lush region, told Lewis and Clark they called it “Wallah Wallah,” meaning “land of many waters.” They were right. Walla Walla sits poised at the junction of the Snake and Columbia Rivers in a relatively remote corner of Washington State. Since its founding, the community has thrived because of the land’s rich natural resources. Canoeing, kayaking and rafting can keep visitors busy throughout the year.

From fur trading in the late 1800s to wheat and onion farming, then later, wine, Wallowans know how to make the most of what Mother Nature has given them. Yet despite the town’s growing reputation as a wine lover’s dream, it still maintains an old-time charm and environmental integrity that makes for an affordable and fun RVing destination.

Why Walla Walla Wineries are a Bucket List Experience

If I could sum up the Walla Walla Valley wine experience in one sentence, it would be “Wine tasting without attitude.” Wineries in the Walla Walla Valley are refreshingly down-to-earth, have relatively affordable tastings and are just darn nice places to visit. Each winery seems to be staffed by people who don’t care if you can’t tell the difference between a Viognier and an Albarino, but they’re always happy to educate anyone who wants to learn. It’s worth taking a spring wine-tasting adventure. 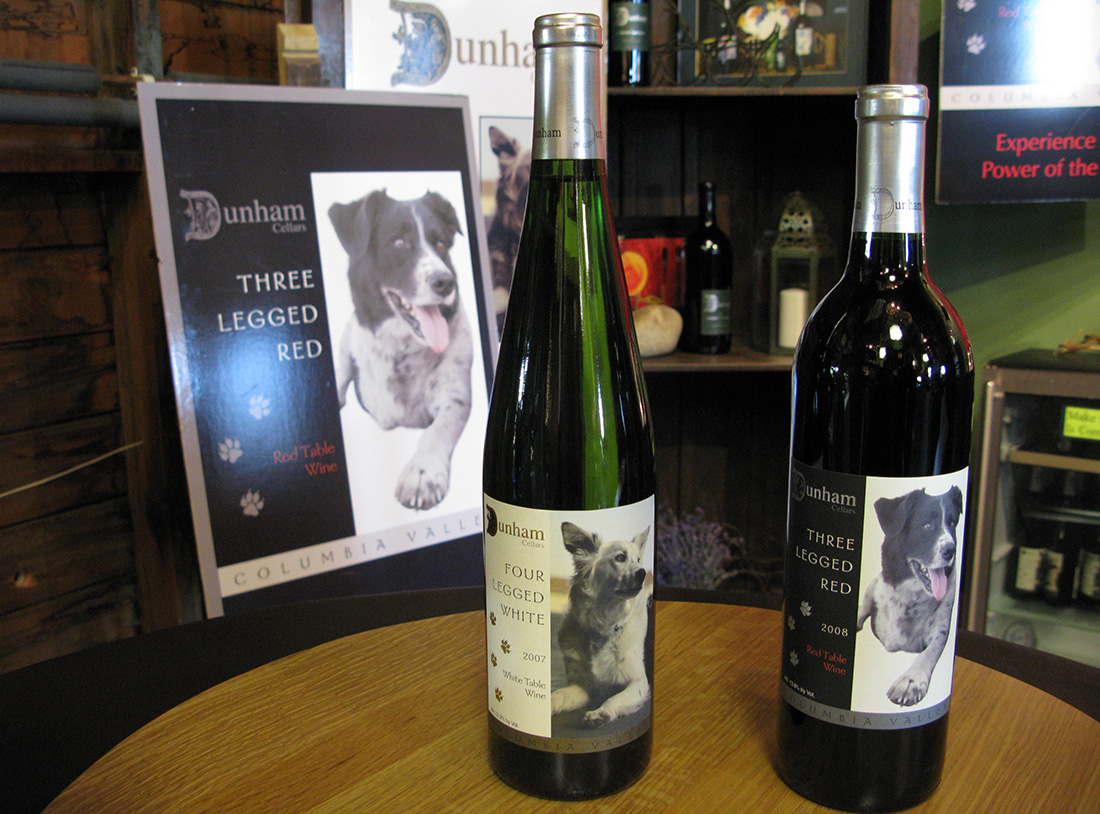 One of our favorite places to visit in Walla Walla is the Dunham Cellars Winery. Located just a few blocks from the Walla Walla Regional Airport, Dunham is housed in a remodeled World War II-era airplane hangar and is one of more than a dozen small family airport wineries, all within walking distance of one another. The winery holds a special place in the hearts wine and dog lovers like myself, because of their red table wine called “Three Legged Red” and a white affectionately called “Four Legged White.”

Our most recent visit happened to coincide on the day that Dunham’s crew was bottling “Three Legged Red.” When Dunham’s marketing director observed our excitement about seeing our favorite red table wine on the production line, she gave an unexpected tour of the bottling process. But that wasn’t the first time we were treated to authentic Walla Walla hospitality. On a previous visit during the fall harvest, we were given an informal behind the scenes tour at the winery. It was just another example of the laid-back, warm welcome visitors can expect at any Walla Walla Valley winery. 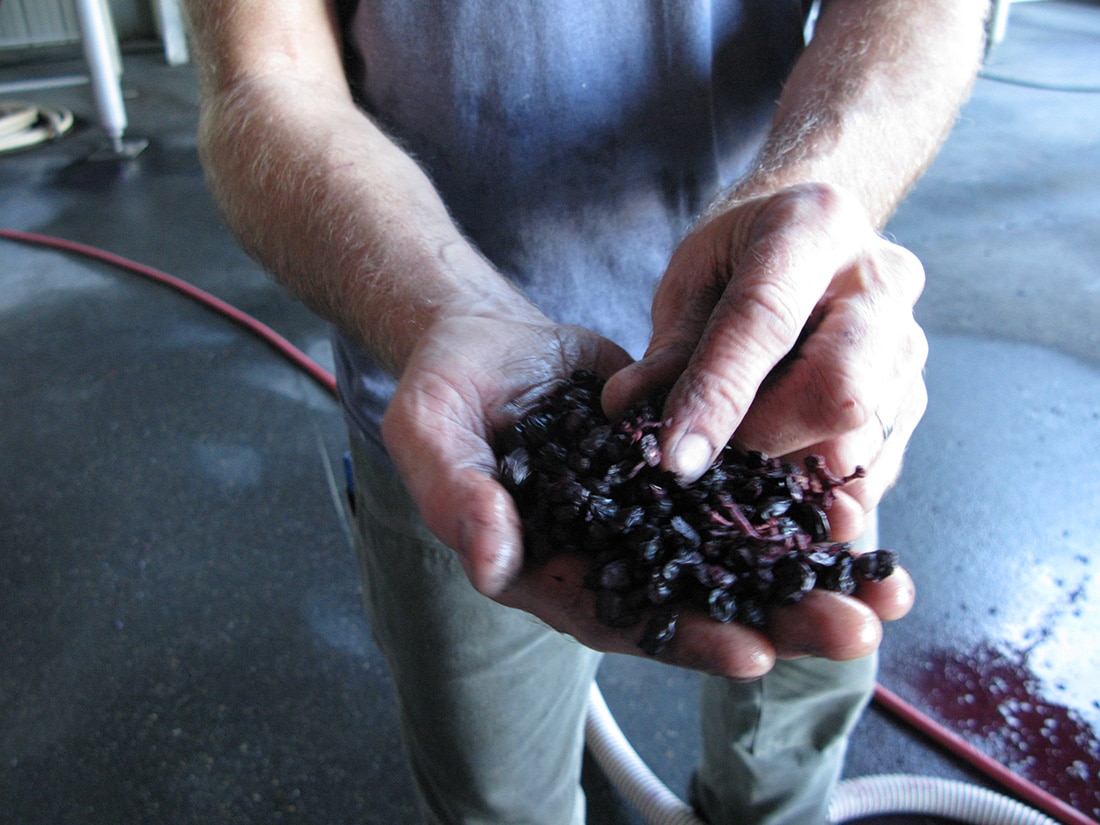 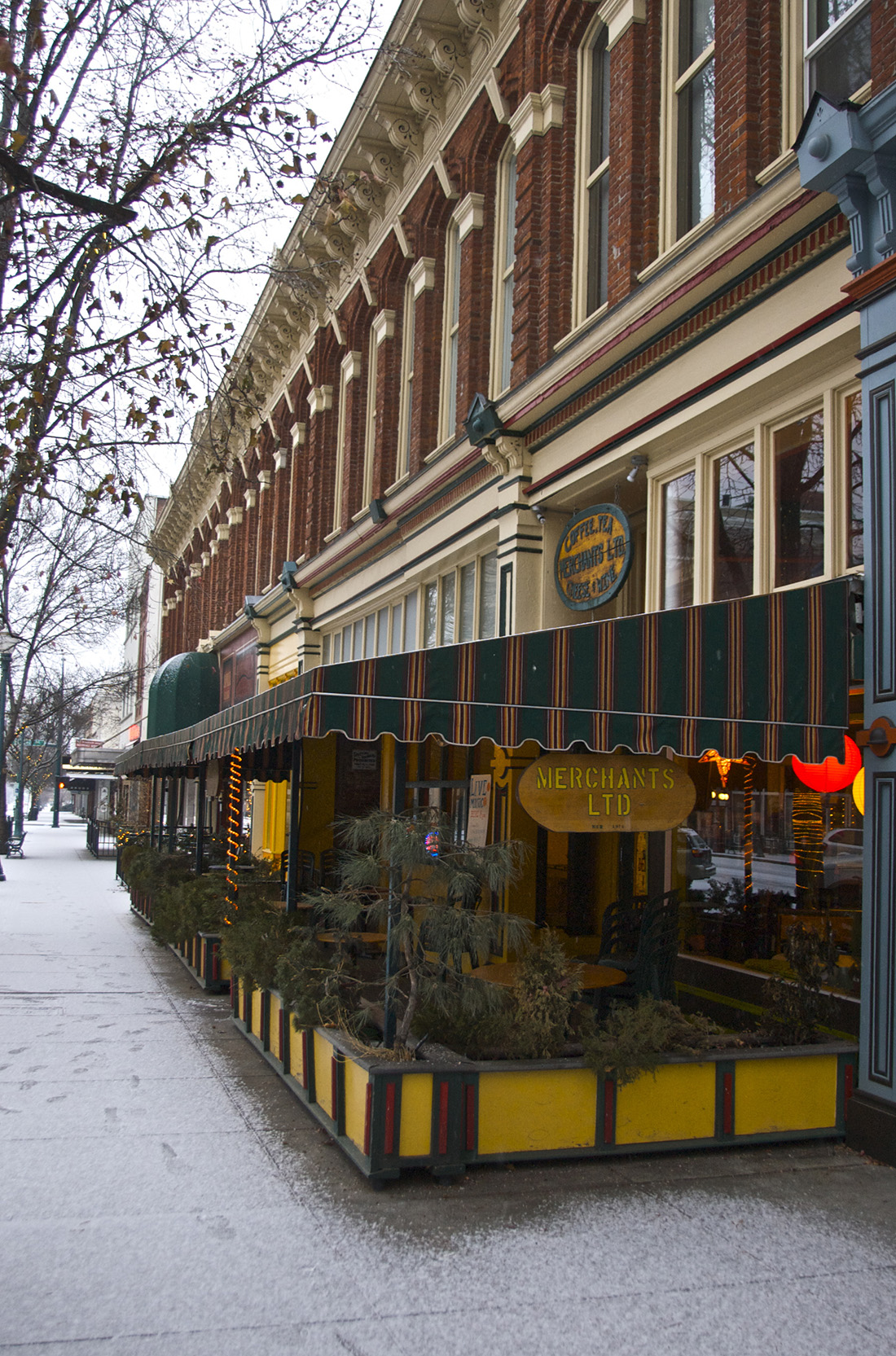 You can build your whole RVing trip to Walla Walla around grapes, but the beautiful outdoor scenery is also a one-of-a-kind experience that you shouldn’t miss. Walla Walla birding is among the best in North America, in places like The McNary Wildlife Refuge and Walla Walla River Delta. If you would rather be paddling, hiking, biking or fishing, Outside Walla Walla can help plan an outdoor adventure in and around Walla Walla in the surrounding Blue Mountains.

When your outdoor adventure is done for the day, you can cap it off with a farm-to-table dinner at any of the local eateries in Downtown Walla Walla. This quaint shopping district that was once dilapidated and abandoned is now an award-winning destination teeming with the best this small college town has to offer.

Where to Go RV Camping in Walla Walla

Walla Walla’s best RV park is the RV Resort Four Seasons. No, you won’t get chocolates on your pillow like at the famous hotel namesake, but you will get a year-round, full-service RV park convenient to parks, shopping and one of the best attractions in the area, the Fort Walla Walla Museum. We visited when researching my husband’s family roots in Walla Walla and found this treasury of local artifacts, lush gardens and a pioneer settlement well worth an afternoon visit. 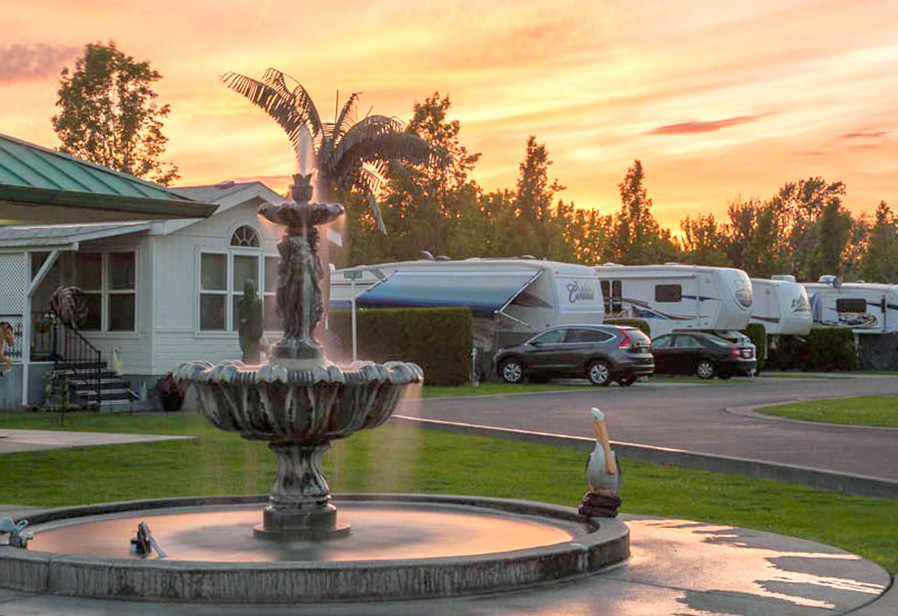 As you can tell, we are huge fans of this little community. Walla Walla is a shiny gem far from crowded cities, with all the important qualities that make certain small towns great destinations. When you decide to take the leap and go RVing to Walla Walla, I’m confident you’ll fall in love with it too. 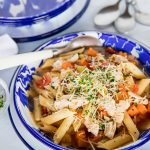 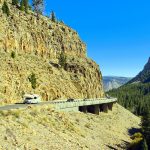 Rene Agredano is a full-time RVer and location-independent entrepreneur with a love for writing, jewelry design and animal advocacy. Rene and her husband, Jim Nelson, became full-time RVers in 2007.