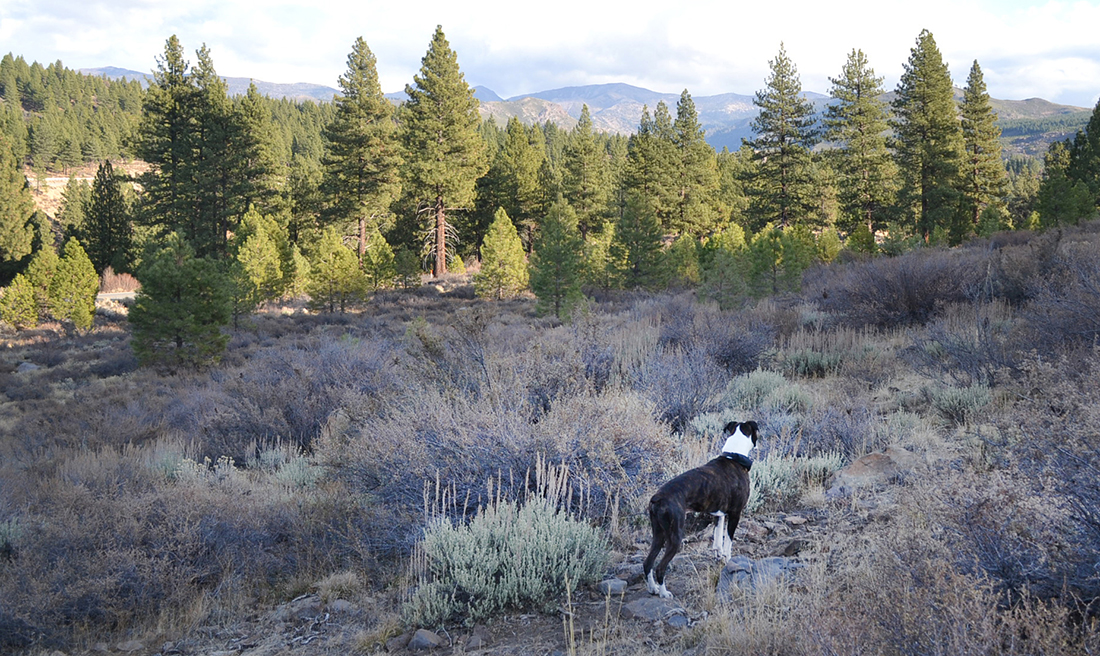 Being relatively new to full-time RV life, we weren’t quite sure where we would wind up for this winter season. We purchased our RV back in April and had been living at the regional park in Truckee for the summer. But we knew that our work-trade agreement there was ending in September so we had to look elsewhere for the winter months. That’s when Truckee River RV Park in California entered the picture.

The park offers a total of 52 sites with full hookups (water, sewer and electric). There are two bathrooms located at opposite ends of the park. These restrooms also have showers if your rig isn’t suited for keeping you clean while you’re RV camping and the lower restroom has a coin-operated laundry room where you can clean and dry your clothes during your stay.

The sites themselves are paved and the park overall is landscaped and maintained very well. One of the more interesting things about the park is that it has a healthy population of deer that frequently graze the grasses between the sites. While this can be somewhat of a nuisance if your dog likes to snack on deer droppings (like ours sometimes does), it’s also quite nice to wake up and see a furry family of deer grazing right outside of your window. 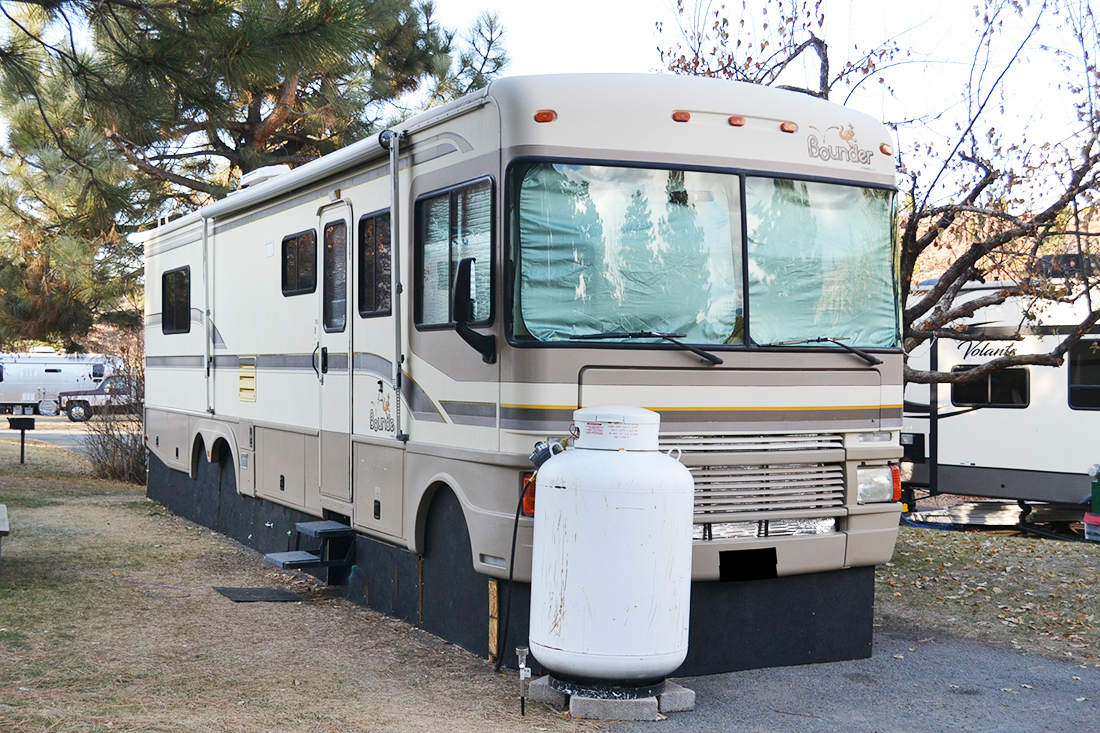 In our month in the park so far, we’ve also very much enjoyed meeting the other campers that are frequently coming and going. The park is located right off of Highway 80 (yes, that does mean a little highway noise) just ten minutes from downtown Truckee and 20 minutes from Reno. This being a major thoroughfare for travelers of all types, we’ve found that the park attracts people coming and going to several. So the chance to meet and hear stories from those folks has been another perk of living here thus far.

In addition to the sites, restrooms, laundry facilities, the park also has a small kid’s playground and a covered grill area where groups frequently cookout and hangout during the summer months. There’s usually a Ping-Pong table in this area as well, but that has been folded up in preparation for winter at this point. 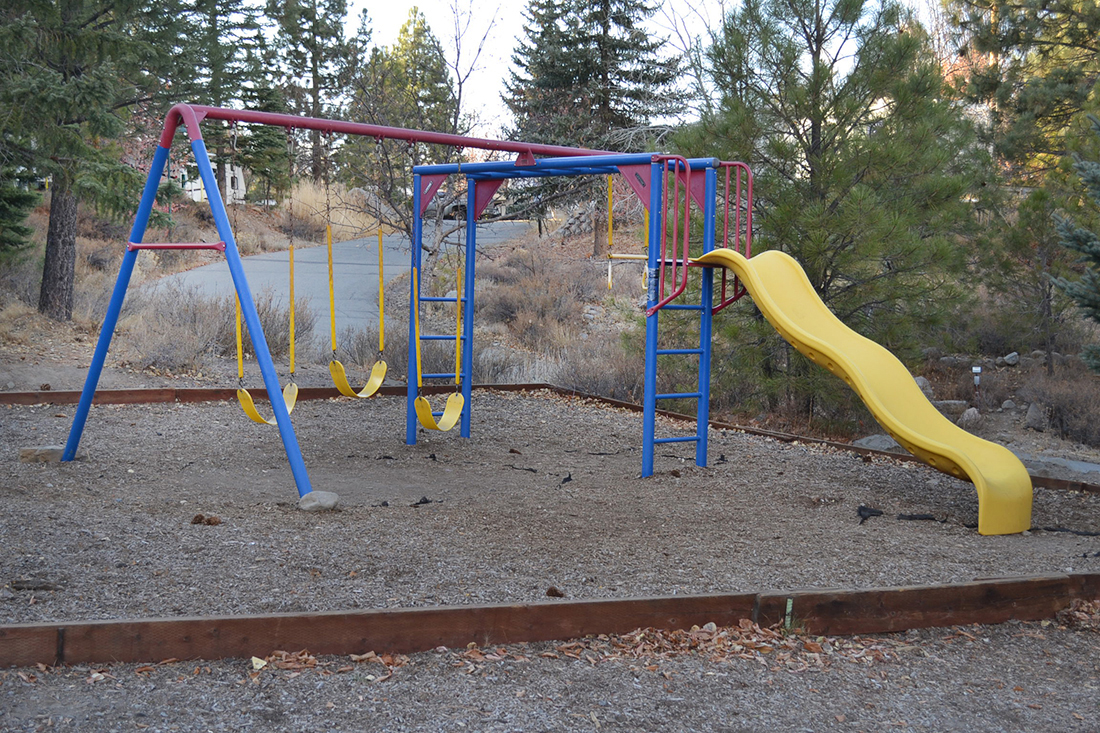 Below the park, the Eastside Deli and Market is an easy stop if you forgot any last-minute food, fishing gear, RV maintenance necessities, outdoor gear, river floaties or other supplies. They also offer paddleboard rentals during the summer months and there is an on-site whitewater rafting company (Raft California) during the summer as well. The staff that works in the deli and market is always friendly and willing to share their knowledge. As a bonus, they make excellent sandwiches and killer breakfast burritos!

Get To Know The Owners

Tammy and Walt are the owners of the RV park. They moved to Truckee in 2010 and settled in the Glenshire subdivision (which is where I grew up!). I remember the park being for coming up for sale shortly after they moved into town. All of us Glenshire folks like to stock up on gas there as we head out to recreate at either the Boca or Stampede Reservoirs that lie just north of the park. 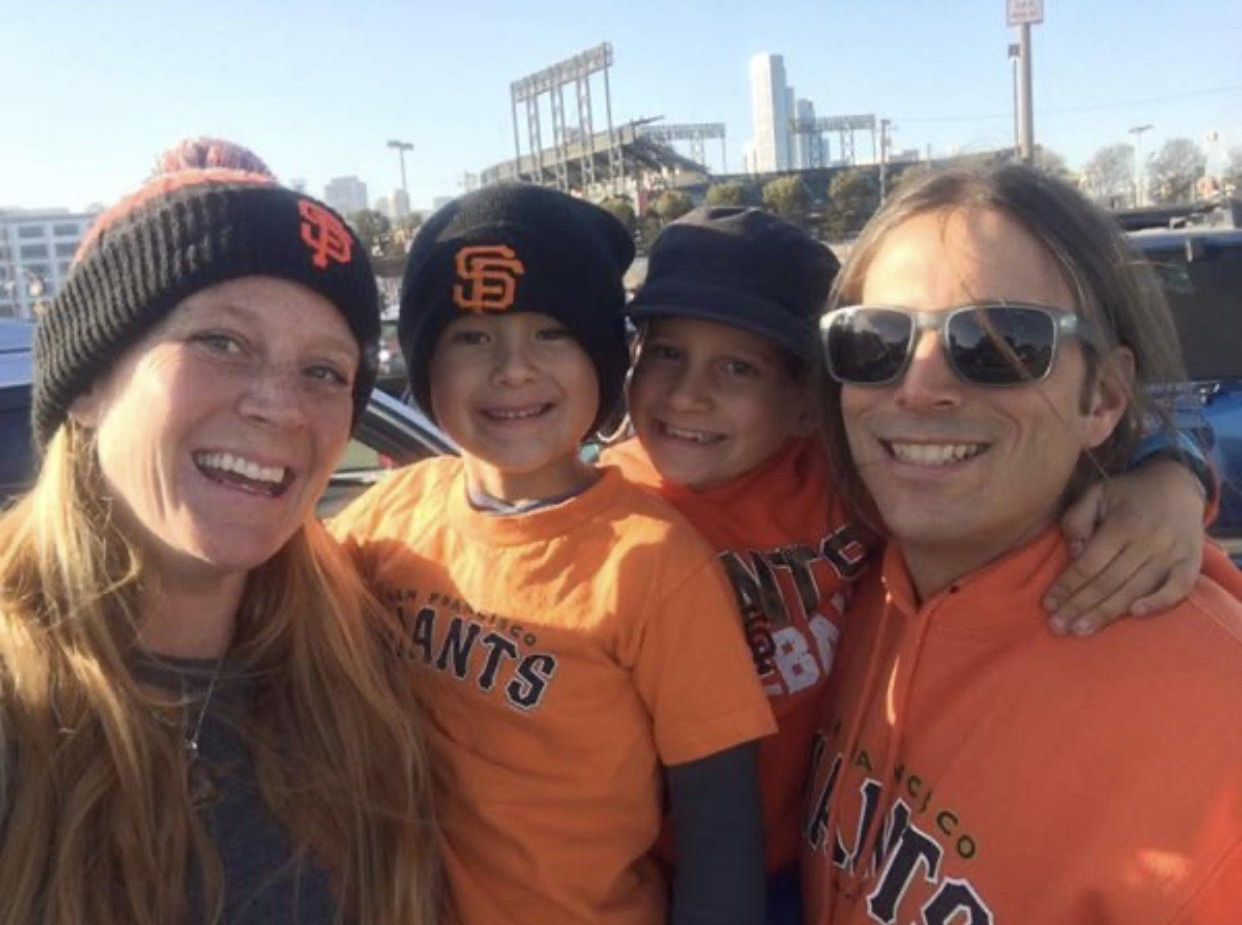 Tammy says that they lived here for three years, kept seeing those “For Sale” signs, and got to know the history of the park and the people that live nearby. In May of 2013, they decided to go for it and buy the park. What they found was a little more work than they may have initially bargained for.

At the time of the sale, no RVs were actively coming and going to the park. There were a few friends of the previous owners still hanging around, and even the gas pumps outside of the market were non-operational. The store itself had minimal offerings and, for some reason, the strangest hours.

Tammy says, “the first summer was probably one of the craziest of my life.” She and Walt started up the business themselves and, fortunately, Walt’s parents were able to help out with their kids (who were just two and four years old at the time!). Cleaning up the park was a chore in itself, and there were a lot of chaotic days as they initially figured everything out. 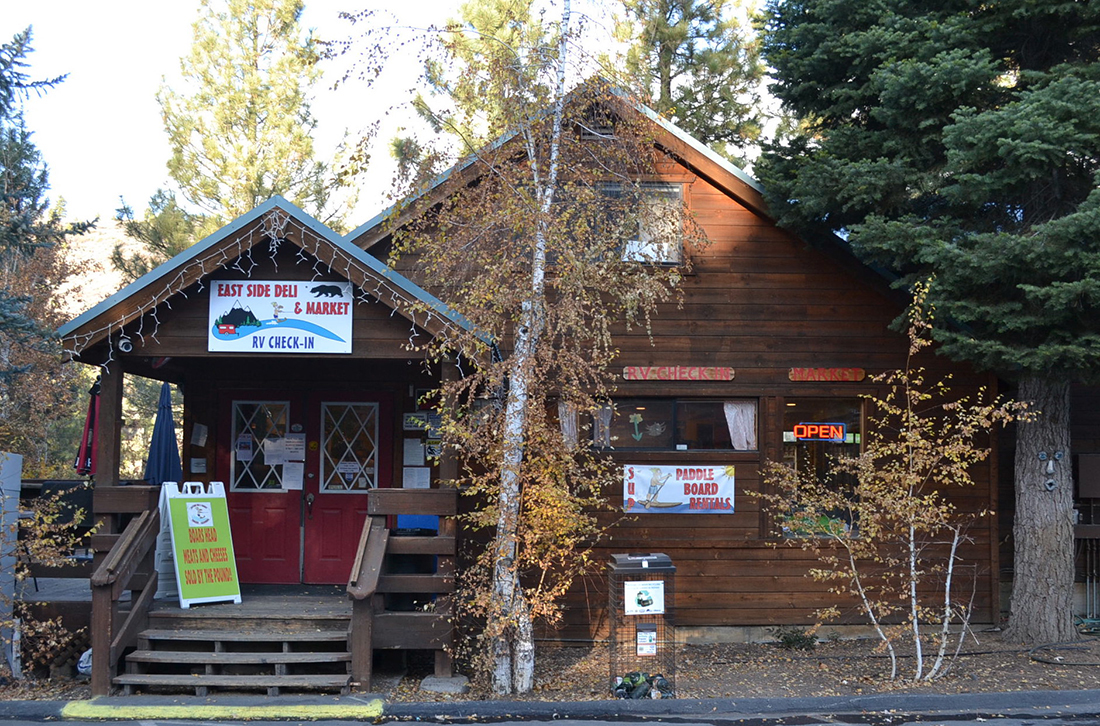 Slowly, they started seeing RVs filter in, but even that increased their workload. Tammy remembers sometimes having to run up to the sites to trim trees so that guests could fit because the park hadn’t been maintained for years and many of the sites were overgrown.

But they put the work in and gradually started seeing more and more sites occupied. They lived above the market and deli for the first two years as they got their bearings. Frequently, their kids worked in the store as Mom and Dad took care of their increasing number of RV guests.

Six and a half years later, they’re still “busier than [they] ever dreamed of being,” but Tammy says that she “loves meeting travelers from all over the country and even the world! It’s nice to be in a business where people are on vacation and happy!”

What To Do in Truckee

The closest town to the RV Park is Truckee. It’s an old railroad town that offers plenty in the way of bars/breweries, restaurants, boutique shopping, and history. In the mountains surrounding this area, you’ll find ample recreation. This includes, but isn’t necessarily limited to, hiking, biking, ATV riding, whitewater rafting, kayaking, paddleboarding, ziplining, parasailing, and much more.

Of course, if you’re a full-time RVer and you happen to make your way to Truckee River RV Park during the winter months, this location is prime for accessing some of the region’s best ski resorts. There are at least six resorts within a 30-minute drive of the RV Park. While that drive time depends on weather conditions, of course, it should give you an idea that the proximity to both winter and summer recreation is top-notch here. 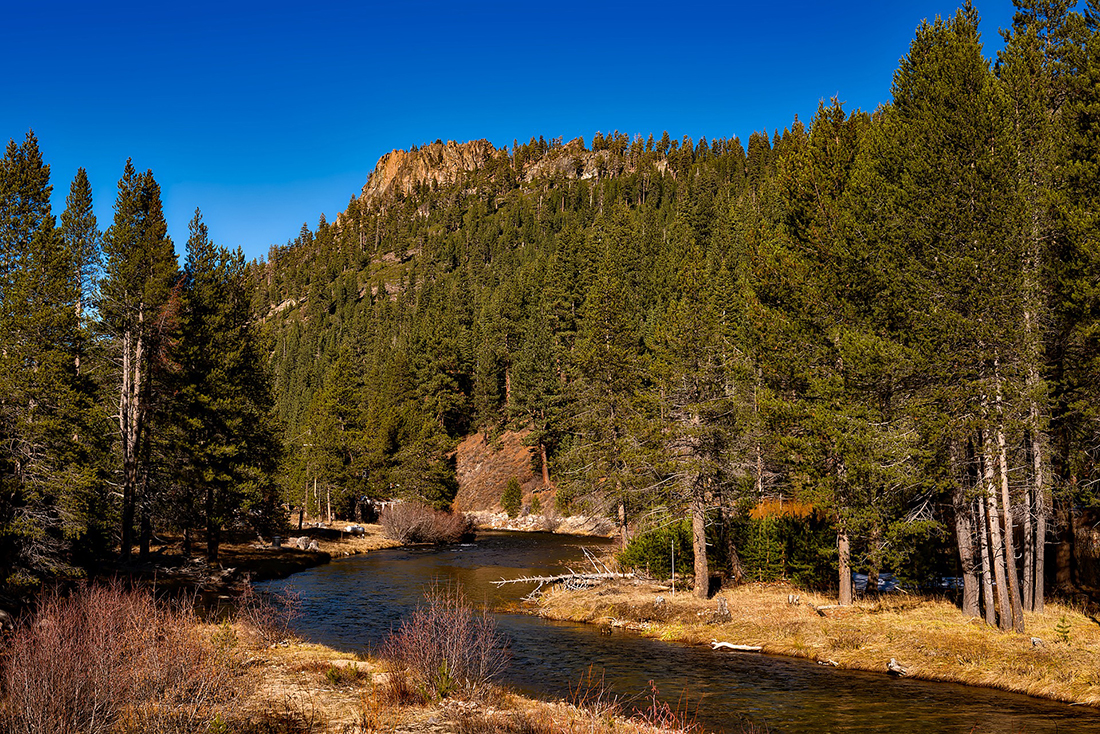 As someone who grew up in Truckee, one of my favorite things to do on a relaxing summer day is to float the Truckee River. You can opt for a self-guided adventure or look into one of the awesome whitewater rafting companies in the area.

For the avid fly-fishermen, the Truckee River (and Little Truckee River) offers excellent fishing from May through November. I believe the market and deli at the RV Park sell fishing licenses (they used to anyway!) and they also have several guides in the store to help you learn about what’s hatching at different times of year along the river. Another great nearby attraction is Donner Memorial State Park, home to the Donner Lake. Although it’s named after a grim chapter in pioneer history (you’ve probably heard about the Donner Party), the lake is home to fun-filled boating and some of the biggest lake trout in California.

In addition to the many urban and wilderness recreation opportunities in Truckee, you’ll also find yourself a quick drive from Reno and under an hour from Lake Tahoe. Reno is the go-to spot to find a little more variety in the way of food options or to catch a movie, go bowling, or try your luck at the casinos on a rainy afternoon.

Lake Tahoe, also sometimes known as the gem of the Sierras, is about 30 minutes from the RV Park. It’s the second-deepest and largest alpine lake in North America (behind only Crater Lake in Oregon) and is truly a sight to behold if you’re a first-time visitor to this area. Around the lake, you’ll find beautiful beaches, exceptional hiking, relaxing opportunities to kayak or paddleboard, and much more. 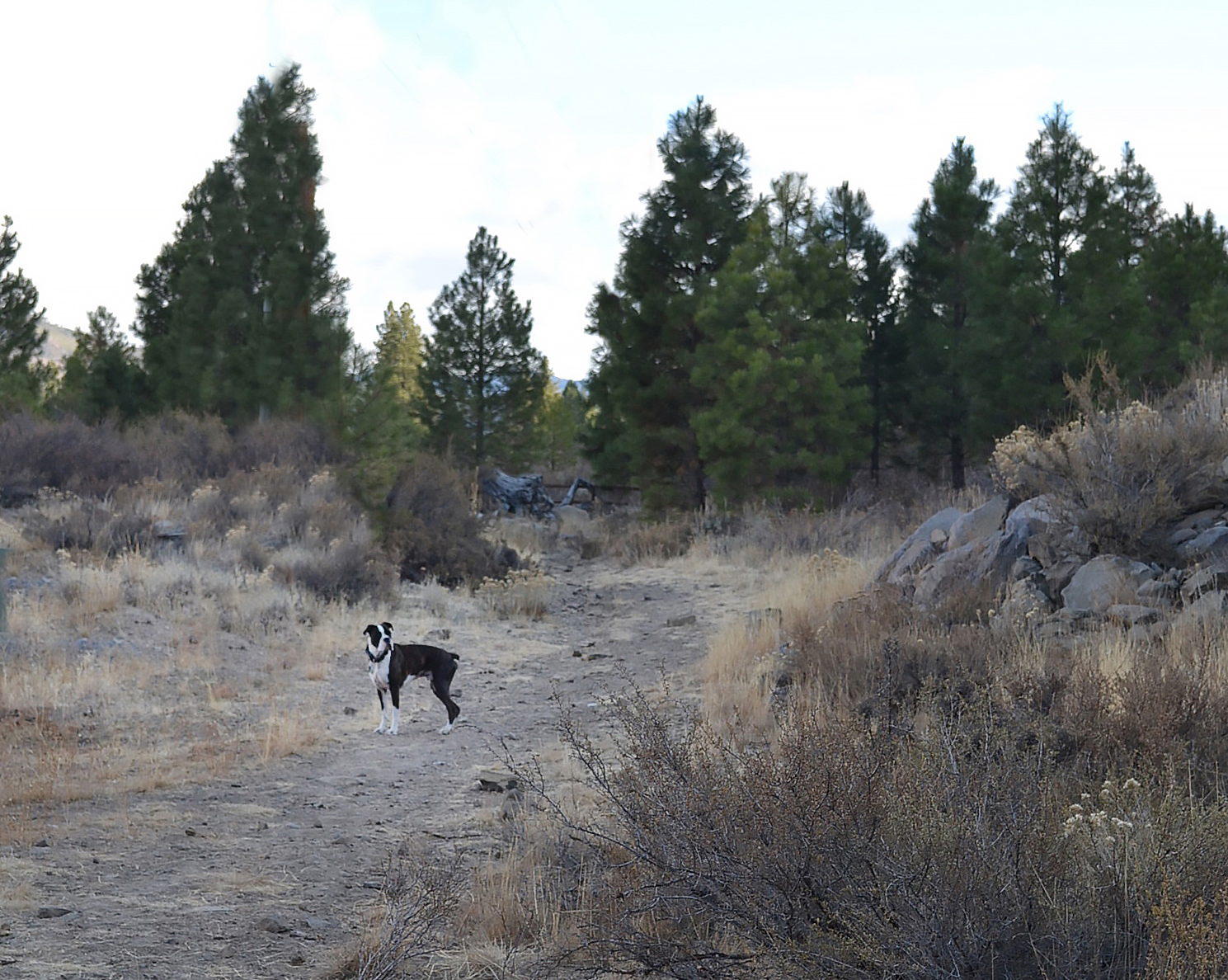 If you do make your way over to Lake Tahoe for a day trip, keep in mind that driving around the lake requires at least three hours. It’s 72 miles in circumference and there’s almost always a bit of traffic during the summer months. If you’re looking for iconic stops to make along that route, Sand Harbor State Park, Baldwin Beach, and Emerald Bay are just a few of the many great choices that you can’t go wrong seeing!

Whether you’re coming from eastern Nevada and heading up into the mountains or just making your way over the Sierra crest, Truckee River RV Park is a great place to stop along your larger journey. Most importantly, it’s clean, well maintained, and offers the right amenities.

Whether you’re just staying overnight or looking for weekly or monthly rates, this park has everything you need and it’s also one of the most affordable full-hookup RV Parks in the area. But you don’t have to take my word for it, come on in and find out for yourself! 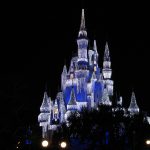 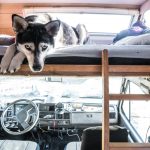