I’ve been teaching seminars at The Rally even before it was called that, when its official title was the eloquent Great North American RV Rally, or as it was known by its acronymn, the pirate-sounding GNARR. During this ten year run, the RV industry, as well as the rally attendance, has risen and fallen on the whimsical gyrations of the economy, foreign oil prices, orange and red alerts, and the weather (oh, did it rain in Perry, Georgia in the spring of 2001).

This year may have been the largest test of RVers confidence, not the weather in the high desert climate of Albuquerque (though it was quite chilly the first few days), but rather the condition of the economy. Would RVers show up eager to learn the intricacies of the RV lifestyle through the morning to afternoon seminars? Would they have cash in their pockets to purchase the gadgets, goodies, and necessities offered by the flock of vendors who traveled from across the country to set up their booths and display their wares? Would the retired and soon to be retired pull their heads inside their shells until the economic outlook predicted more sunny days? And would they even care about boondocking, birding, and wildlife watching (my seminar subjects) in the face of economic crisis?

What a surprise it was on the first day of “Pre-Show” days–Thursday–when my 8:30 boondocking class overflowed and a second class was hastily scheduled to accomodate those who didn’t get in. Through that class I learned that RVeers are a resilient sort. None of those I talked to had the slightest notion to park their rig and wait out the turbulence. Instead, they wanted to learn how to boondock, not only to be out in nature more, but to save money, live a greener lifestyle, and most of all, to continue RVing within a tightening economy.

I noticed something else. The aisles of the vendor buildings were jammed. All day. Cash was changing hands. People were lugging bags and bundles of their new purchases out of the buildings. And “Sold” signs were appearing in the windows of many of the rigs–of all sizes–that dealers had moved onto the grounds. One vendor, who made his living by traveling from RV show to RV show told me that this was his best show of  the season. Mike and Terie Church’s RV guide books were walking out their booth–by the twos and threes. Brian Brawdy’s green Lance camper was swamped by people asking questions on how to green their RVs.

This sure didn’t look like the demise of the RV industry, far from it. My guess is that, even if the economy hasn’t quite hit bottom yet, RVers are not going to stay dormant for long. Spring is here, and RVers turn to thoughts of pine scented forests, sandy beaches, and two-lane backroads. And nothing is going to keep their wheels chocked for long. 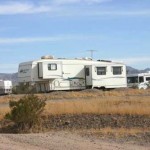 Boondocking Is Not Free Previous
National Balloon Museum Next 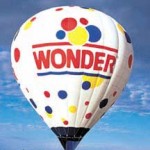