The Annual Pilgrimage to Chimayo–Part 1

During Easter Week this year, we happened to be traveling through New Mexico listening to Taos, New Mexico’s solar radio station (for those interested, it is the most powerful solar radio station in the country and plays a wonderful eclectic collection of interesting music. I often listen to them while at home in Wisconsin as well at www.ktao.com). During the broadcast, a comment was made about the annual “Pilgrimage to Chimayo” occurring during Holy Week.

Intrigued, and looking for something new to explore, we inquired at the Visitor’s Center in Taos, NM about what the pilgrimage was all about. The woman we spoke with explained that every year during Holy Week, people make the journey to Chimayo, New Mexico from wherever they happen to be, Taos, Santa Fe, Albuquerque, even Colorado and other parts of the country. The pilgrimage is typically completed on foot; the day the journey begins depends on the individual’s starting location. As Chimayo is approximately 39 miles from Taos, walkers from Taos often start on Holy Thursday or Good Friday, with the goal of reaching the Chimayo by Easter Sunday.

In fact, the woman we spoke with very generously shared that she had done the pilgrimage several years back and had started it on Good Friday. We asked for more information about this journey and were informed that persons undertaking the trip are typically seeking healing of some kind and are offering their walk and the sacrifices made thereon as a sort of penance in exchange for the healing they seek.

The journey culminates in arrival at a chapel in Chimayo, NM built on a site where it is believed a miracle occurred 200 years ago. In the 1800s a wooden crucifix was miraculously unearthed by a villager, Bernardo de Abeyta. According to the story, in 1811, Abeyta, who was a Penitente, the brotherhood that kept the Catholic faith alive in New Mexico when priests were sparse, was performing the rituals of penance for which the Penitentes are known when he saw a light shining from a spot in the earth. Digging down, he found and unearthed a large crucifix containing a dark Christ figure. He and other villagers carried the cross in a grand procession down to the nearest church, eight miles away in Santa Cruz. The next day, when the villagers awoke, they again found the crucifix located in Chimayo!

This procession was repeated twice more before the villagers decided they should build a chapel at the spot where the cross was found. The church was finally constructed in 1816 and called it “el Santuario de Nuestro Senor de Esquipulas.” It is now commonly referred to as “el Santuario de Chimayo.”

Check out Woodalls to read more about New Mexico campgrounds and things to do in New Mexico. 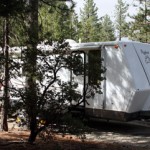