Quartzsite — Wheeling and Dealing in the Arizona Desert

Quartzsite brings RVs to the Arizona desert for a larger-than-life retail event.

Tens of thousands of RV enthusiasts are converging on Quartzsite, Arizona, to attend the 35th Annual Quartzsite Sports, Vacation & RV Show. The January 20–28 show, which typically attracts more than 150,000 towable and motorized RVs, is one of the largest RV shows in the country. Located near Interstate 10, about 18 miles east of the California border, the event is part of the Quartzsite Showcase & Swapmeet, which runs until February 28 and features vendors who sell everything from lapidary creations to arts and crafts.

“It was unbelievably busy here on Saturday,” said Jo Ann Michelson, executive director of the Arizona Association of RV Parks and Campgrounds, who was distributing free camping guides to nearly 20 states across the country as well as a few Canadian provinces.

“It was shoulder to shoulder people,” she said. “We could barely keep the racks stocked.”

The show features RV dealers and aftermarket suppliers as well as representatives from RV parks and camprounds. Many Show attendees camp in the surrounding Bureau of Land Management property.

Jerry and Laura Couture, full-time RVers from Surprise, Arizona, were keeping busy staffing a booth for Frankfurt, Germany-based European Motorhome Tours, which organizes four month-long caravan-style RV trips across different areas of Europe each year. The Coutures themselves have taken two RV caravan trips across Europe and shared their experiences with RV enthusiasts who stopped by to check out the company’s upcoming travel itineraries.

But while RVs are certainly one focus of the show, and complement several RV dealerships in Quartzsite, the event itself is more like a flea market, offering everything from tropical shirts to jewelry to gemstones to houseware items, from kitchen cutlery to bedding to Jacuzzis.

Much of the show takes place inside a massive white tent, with vendors displaying their products in booths to thousands of RVing snowbirds as well as RV owners who live within a day’s drive of the show.

Many snowbirds came to the show pushing poodles, chihuahuas and other pets in baby strollers, while others meandered through the crowd on motorized mobility scooters, like you see in supermarkets.

Outside the great white tent, there were numerous RVs on display as well lots of food vendors selling everything from gyros to frog legs and deep fried ice cream.

“I think it’s kind of overwhelming,” said Donna Humphries of Santa Cruz, California, who owns a 37-foot Newmar motorhome. She and her husband drove down from Santa Cruz just to attend the show, and spotted several items they planned to purchase, including a pillow-top mattress pad and a flag pole.

“It’s more like a flea market,” said Teresa Mahan of Ohio. “There’s a lot of stuff (here) that doesn’t have to do with camping.”

Indeed, the show featured numerous products designed to ease aches and pains and other ailments that come with advancing age. “We’re getting lots of interest,” said Scott Turner, who is selling a natural anti-inflammatory dietary supplement called Bend Again.

“This is our ninth year here,” said Lora Bennett, a sales representative for Seattle, Washington-based Magic Massage. “We have regular repeat customers who come back every year instead of ordering products online.” 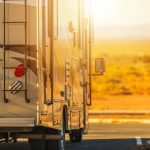 Mark My Words: January - Getting Your RV Batteries Ready... Previous
Discover the Deluxe RV Destination on Route 66, New Mexico Next 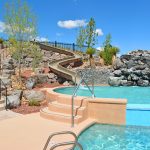