While a good percentage of inhabitants of the “Atlantic Provinces” [see Barbara and Tom Palmer’s Comment below] are closing up their businesses and preparing for the winter migration to the U.S. Sunbelt states, your excitement in visiting this easternmost Canadian turf next spring and summer can be building.  After 17,000 miles of driving, it may be a while before we return, and we have several other journeys in our plans, but the call to revisit the Atlantic provinces is certainly worth considering.

I’ll write more in the future about the specific places that were the most memorable in our seven weeks of caravanning to the “Maritimes Plus One.”  I think the best service I can provide in this blog is to mention briefly what were highlights for us – adventures that will stay with us for years to come, supplemented, of course, by photographs.

The last province on our RV expedition was P.E.I., or as it’s known to non-locals “Prince Edward Island.”   And, let me mention at this point that each of the four Atlantic Provinces has its own history, customs, and way of life.  The fishing villages are somewhat similar in many areas, although the fishing boats aren’t necessarily the same and they are out to haul in different catches – lobster, oysters, cod, salmon, haddock, probably others I don’t remember.  And fishing seasons, as set by the Canadian government, are a bit complicated for us outsiders and vary by provinces.  What I want to emphasize is that going to New Brunswick is not the same as going to P.E.I., nor is Labrador very similar to Nova Scotia.

P.E.I. settles on our minds as luxuriant greenery, pastures, farmland, rolling hills (most of the provinces also have grassy rolling hills).   But this, the smallest of the provinces, has a serenity we appreciated more than other places.  Our caravan schedule included much ado about “Anne of Green Gables,” one of the most popular books of teenage girls for over a century.   Monique read the book prior to arriving there and passed it along to others in the coterie, all of whom seemed to enjoy it.  Monique and I visited the “Green Gables” house that was the setting for the novel and attended a play loosely based on the book in the mini-metropolis capital city of Charlottetown.  Charlottetown is a beautiful, historic place, bedecked with voluptuous hanging flower baskets.

Can you believe, I intended to wrap up this series in this blog, but I haven’t even finished with P.E.I.?   I hadn’t mentioned playing golf on one of the greenest of courses, a few hours of enjoyment much greater than the normal frustration.  I felt it was a good day on the course since I only lost one ball and had 35 putts.

Not to be forgotten from our week on Prince Edward was meeting Brian MacNaughton at the P.E.I. Preserves Co. near Cavendish.  Soon after our tour 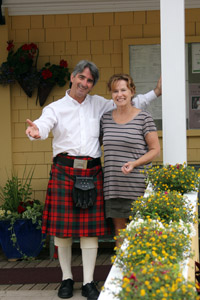 bus pulled into the parking area, a sprightly, kilt-clan MacNaughton hopped up the steps and quickly gave us his rollicking version of his winding course from when his first restaurant failed to when he began selling jars of preserves featuring Grand Marnier, Champagne and other unique ingredients to some of the classiest stores worldwide.

A few minutes later we were enjoying one of the best meals of our caravan trek in his P.E.I. Preserves restaurant.  After dinner we sampled preserves and other treats made in that same building, and finding things we didn’t know we needed to buy in the gift shop.  If you like mussels, this is the place!

After the caravan concluded and our new friends dispersed — some north to the Gaspe Peninsula, others to Quebec and beyond, and others to the U.S.  – we spent a few days on the northwestern part of the island mainly “chillin’” and reveling in the pastoral serenity of that off-the-beaten-trail area.  Starved after driving for hours one day, we stopped at Randy’s Pizza at a remote intersection on the French-speaking Acadian region (also called Region Evangeline) and ordered a plate of “donair” to go.  We didn’t know what it was, and we’re still not sure, but it’s something like a meat pie.  Yes, we would order it again, unlike our experience with poutine in Newfoundland, which didn’t excite our palates. 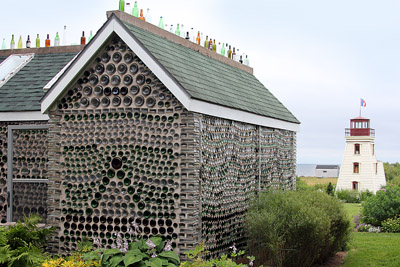 The Bottle House with the Lighthouse Overlooking Egmont Bay

Most notable place to us on our freelance drive was “The Bottle Houses,” a cluster of three small cottages made with bottles encrusted in mortar and built on land that includes the Cape Egmont Lighthouse.  Adding to the spectacle are the colorful gardens interwoven among the buildings.  It’s worth driving the extra miles to the town of Cape Egmont to see the creative construction by Edouard Arsenault.

I’ll save a few more memories for the days ahead.  Meantime, there are a couple of interesting comments below:

A FEW P.E.I. SCENES [FROM TOP]: In anticipation of the opening of the lobster season the next day, fishing boats were lined up and loaded with traps; we entered the Acadian area, also known as the Evangeline Region; the setting for the novel “Anne of Green Gables”; our travels were punctuated with opportunities to make music with Ugly Sticks (as demonstrated by Roger, Sarah and Jean); Donair, featured at Randy’s Pizza near nowhere; and the bridge from Nova Scotia to P.E.I. is the longest span over the Atlantic Ocean. 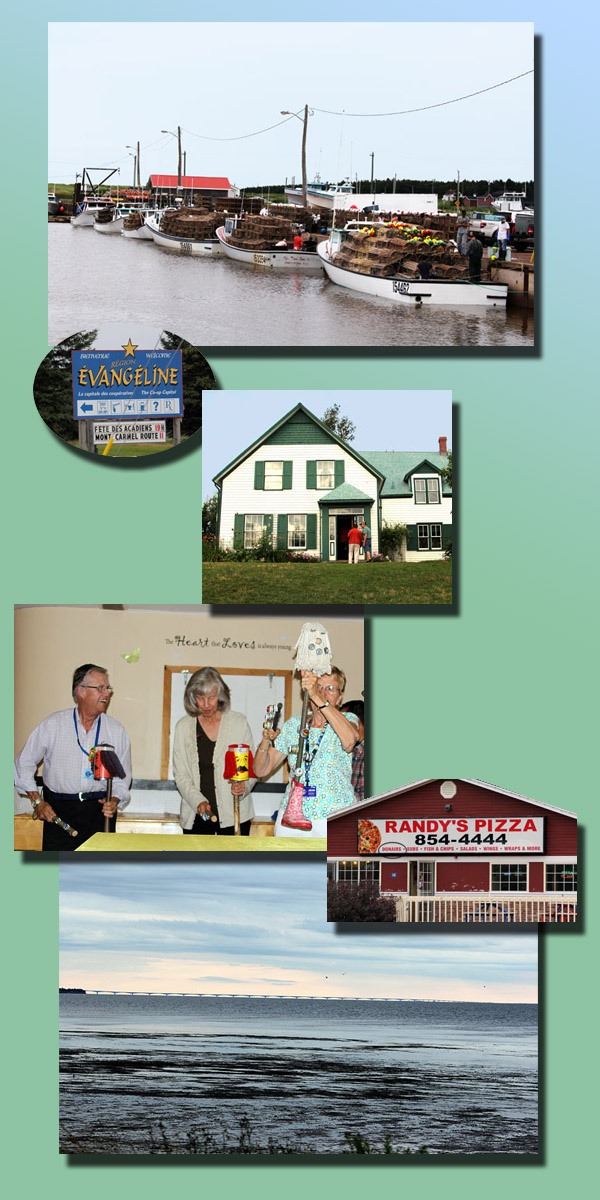 From Barbara and Tom Palmer (and Shelby the border terrier) — Hi Barry and Monique, We have really enjoyed your travel blog – but one thing that is driving me crazy is your inclusion of Newfoundland and Labrador as part of the Canadian Maritime provinces. We are also full-time RVers who spent the summer of 2011 in the Maritimes and Newfoundland – and rest assured, the Newfies we met did not consider themselves part of the Maritimes (New Brunswick, PEI, and Nova Scotia). Nor did the Maritimers we met consider Newfies to be part of the Maritimes. As you undoubtedly know by now, Newfoundland was an independent country until 1949 when it confederated with Canada (with a bare majority of Newfies voting for confederation); is there any way you could work that bit of history into your future posts? We really need to give Newfoundland credit for providing space and hospitality to US forces during the second world war – the US built a number of antisubmarine and naval warfare bases (as well as the Air Force base in Gander) in Newfoundland to protect the northern Atlantic from the Germans. Also, although it’s clear to us outsiders that they really could not have survived as an independent country, many Newfies are still uneasy about being Canadians!

Sorry you had to disable the comment section in your blog – we enjoyed seeing what others had to say!  Did you kiss the cod?

Barry’s Response — I find your note absolutely amazing.  In all our pre-planning and in our three weeks in Newfoundland and Labrador, I had never heard or seen anything that explained that NF/LB are not Maritimes, so I looked it up on Wikipedia:

“The Maritime provinces, also called the Maritimes or the Canadian Maritimes, is a region of Eastern Canada consisting of three provinces, New Brunswick, Nova Scotia, and Prince Edward Island. On the Atlantic coast, the Maritimes are a subregion of Atlantic Canada, which also includes the northeastern province of Newfoundland & Labrador.”

There are so many highlights from our trip; we appreciated each province for its own character.  Newfoundland, the largest, probably offered more variety.  Everything you mention in your comment is true.

As for the comments, that was disabled by the Web folks to combat the incredible volume of spam coming through.  I find that use of the web more distasteful than my experience of kissing the cod!   Thanks for the geography and history lesson.

From David Harrison — I do enjoy your blogs, but after reading the comment on the “far north” region of my country, I think you should buy yourself a globe.   The Canadian Maritime provinces are on the same latitude as southern France and north central Italy.  Do keep the blogs coming, though.

Barry’s Response – You’re also right … BUT, as mentioned, many Maritime people go south for the winter for warmth.  In France and other European nations, the south of France and Italy are destinations where travelers go to avoid the cold, dreary weather.  Latitude doesn’t seem to have much to do with climate – looking up from the lower 48, it’s still the “far north” to me.  I do appreciate you comment. 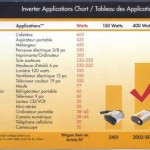