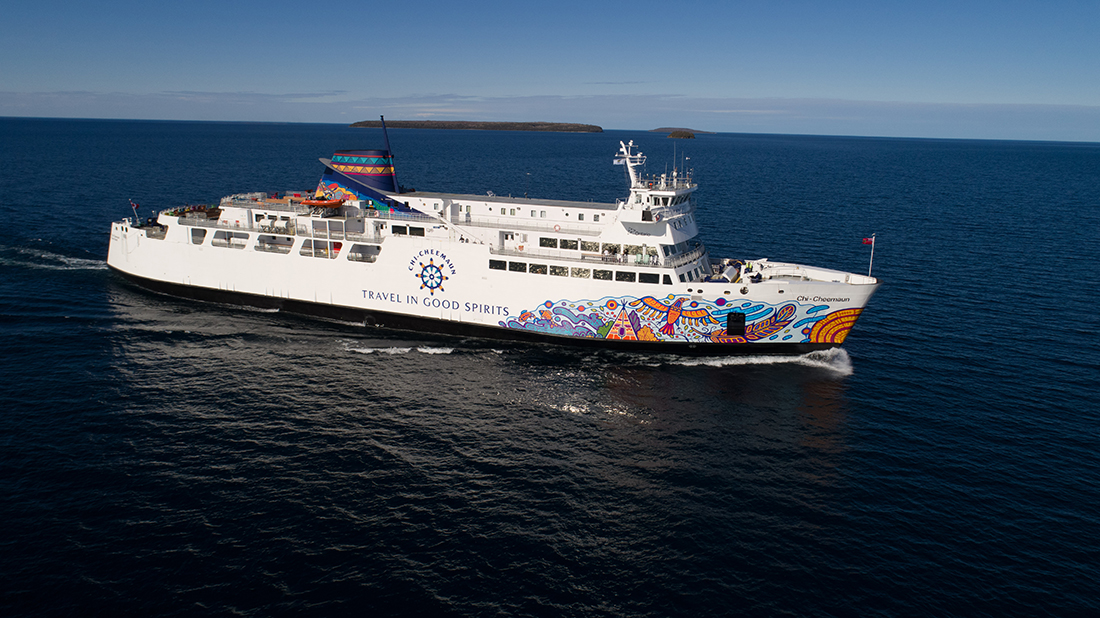 The ship suddenly comes around the corner of North Otter Island, a dot on the horizon that grows as it sails down the Macgregor Channel. There are already people sitting on picnic tables or leaning against the fence, watching as it heads straight for the Tobermory ferry dock. It takes a while to recognize the bright, colorful artwork decorating the prow of the ship, and by the time you can make out all of the swirls of color and creatures on the nose of the ship it’s begun opening like a huge beak, rising up into the air as the ship cruises into dock at Tobermory. An Owen Sound voyage in Ontario has concluded.

The MS Chi-Cheemaun has completed another run to South Baymouth on Manitoulin Island, across the mouth of Georgian Bay. With a few loud clangs, the ramp is lowered onto the dock and a line of cars, SUVs, pickups, trailers, RVs and trucks pour out of the hold of the ferry. A few minutes later, the lineup of vehicles parked at the end of Ontario Highway 6 drive across the ramp and into the ship, on their way to where the highway picks up again on Manitoulin.

On a good day, the crew says, they can empty and re-fill the Chi-Cheemaun’s car decks in fifteen minutes. It generally takes longer to get all of the ferry’s passengers on board via the stairs down the dock, past the colorful mural on the nose of the ship. 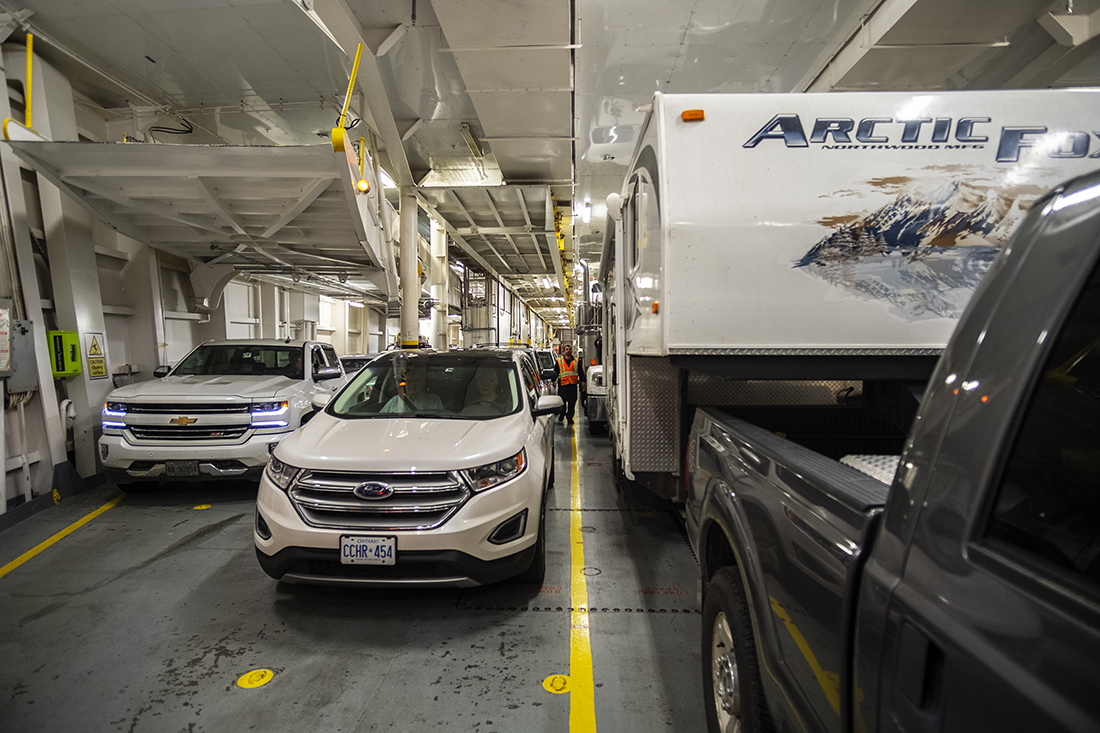 Inside the hold below decks as cars prepare to drive off the MS Chi-Cheemaun ferry as it docks in Tobermory.

Some days, the route across Lake Huron is bright and clear, the only thing disturbing the surface of the water is the wake of the ship. On other days, the weather rolls in, obscuring the cottages and trees on the shore in cool mist, blending the gray water seamlessly into the fog just a few dozen yards from the decks of the ferry. 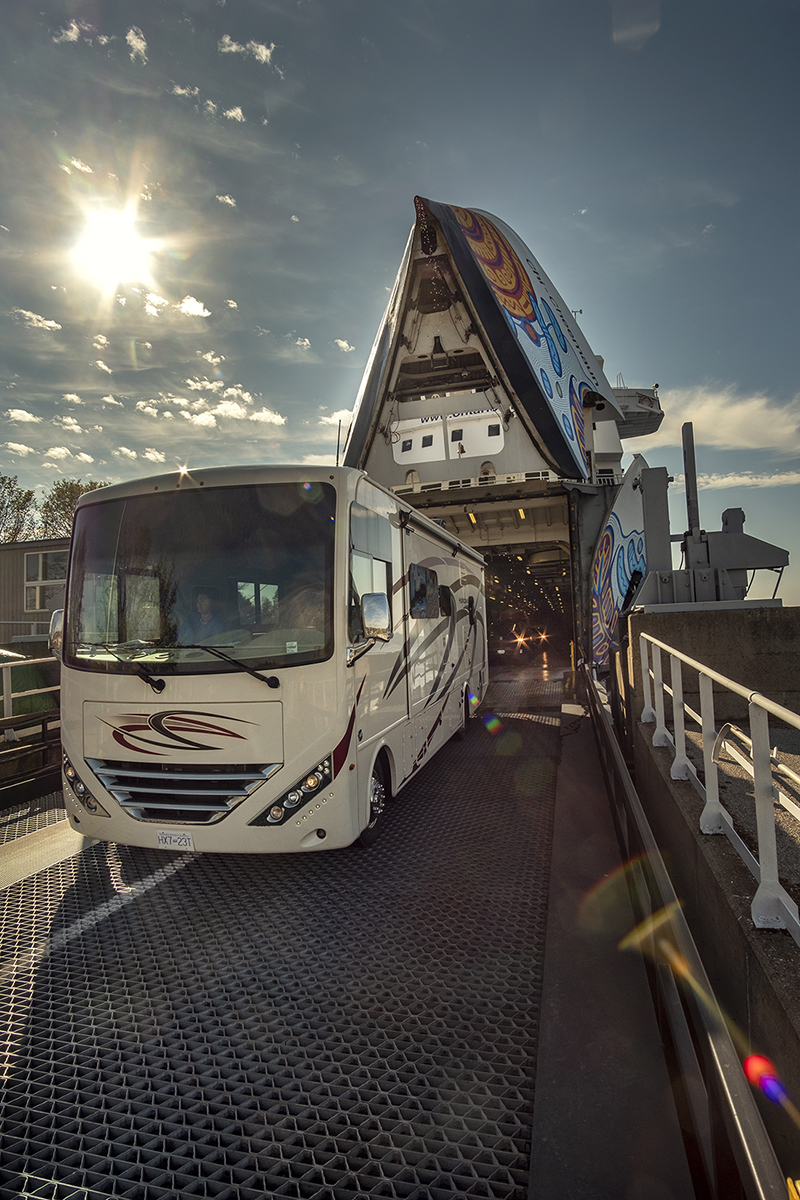 The MS Chi-Cheemaun ferry after it docks at Tobermory.

Didier and Lara Rouaud have driven up from their home in Detroit this Memorial Day weekend on their motorcycles and are leaning on the railing of the deck looking over the bow as the ferry cuts through the fog. They’re on their way to camp on Manitoulin Island, and despite the weather, they’re loving the trip across the bay. “It’s great,” Didier says.

Originally from France, they lived in Norway for four years and say that the Chi-Cheemaun reminds them of similar trips they took there. “But we’ve never seen one where the nose goes up,” they tell me.

Al and Millie Moffat are on their way to Manitoulin to open their family cottage, where they’ll stay for the whole summer. Al says he took his first trip from Tobermory to Manitoulin seventy years ago, on one of the Chi-Cheemaun’s predecessors – either the Normac or the Norgoma, he can’t remember which.

Al remembers one rough crossing, before the Chi-Cheemaun took over, that took five-and-a-half hours, thanks to the weather. The new boat – it’s been in service since 1974 – is a lot smoother. He and his wife enjoy the two-hour journey across the mouth of the bay. “It’s like stepping back in time, going to Manitoulin,” he says. “Nothing much changes.”

Captain Rob Schreiber is taking a brief break in the crew mess by the ship’s cafeteria. He doesn’t want to spend too much time away from the bridge in foggy weather. Every few minutes, you can hear the blast of the ship’s horn.

Schreiber began his career as a mate on the Chi-Cheemaun, returning sixteen years ago as captain. He says that traffic on the bay can get pretty crazy, and even if they’re the biggest thing on the water most days, “if somebody stupid gets in our way we have to go around them.”

He’s captain of a boat that’s become as much of a destination as the towns it docks in several times a day, from May to October. “This one’s pretty unique,” he says, “and I’ve been on ferries all over the world. This is more like a mini cruise – this isn’t just a shuttle.”

In the cafeteria, Bart and Esme Meereboer are looking over brochures and talking to each other in Dutch. The young couple have been traveling all over Ontario in a rented camper that they say has been a challenge to learn to navigate. They’ve been to Algonquin and Pelee Island and Sandbanks Provincial Park, and now they’re on their way to Manitoulin for the last part of their three-week adventure. They describe what they’ve seen so far as “colorful.” 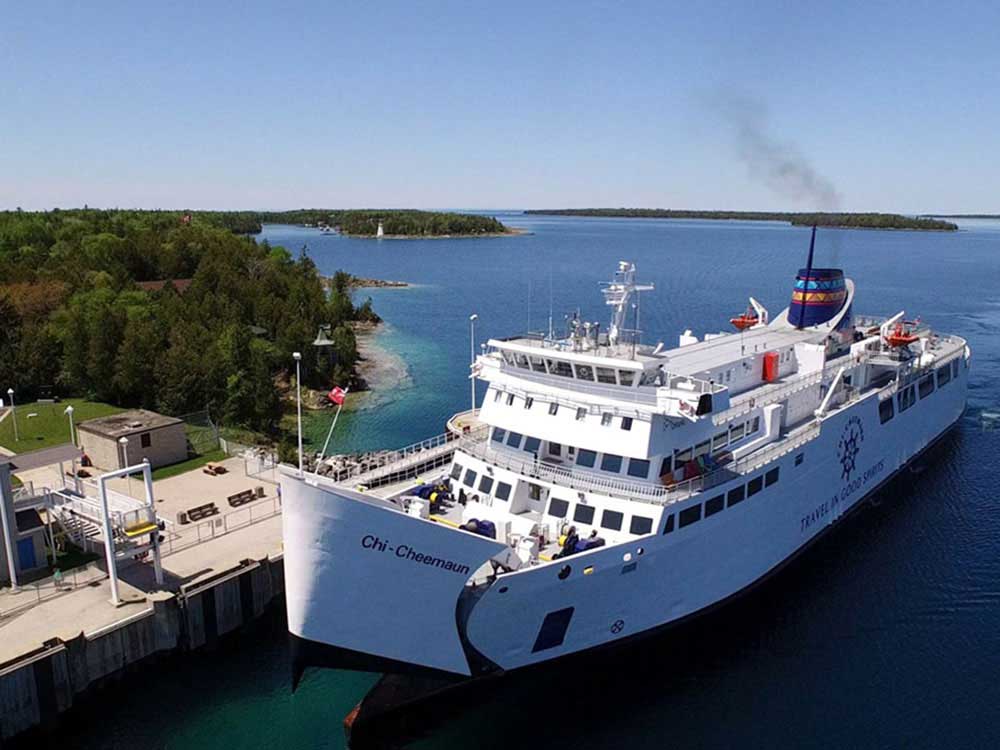 The Chi-Cheemaun reminds them of some of the ferries they’ve seen in Europe, taking people across from the mainland to islands off the coast of Germany and their home in Holland – to places like Texel, Terschelling, Borkum and Ameland. They especially like how the boat showcases the area’s heritage – the culture of the Ojibwe on Manitoulin and the artwork inspired by Anishinaabe artist Norval Morrisseau on the ship’s prow and funnel, and the performance put on by Manitoulin Island’s Falcon Migwans in the lounge during the trip, showcasing different styles of drumming and chants you’ll hear at pow wows all over North America.

They’re also taken with the wildness of the landscape they’ve seen, hiding behind fog on today’s trip, though occasionally a thickly forested island will come into view, only slightly obscured by the mist steaming in columns from the dark water.

That, says Captain Schreiber, is the thing that’s still amazing after all his years on the ship, traveling between Tobermory and Manitoulin through fog and rain, into brilliant sunsets during evening dinner cruises and under celestial skies on “Stargazer” cruises in August.

“Every day,” he says, “even when it’s not good weather, it’s just spectacular.” 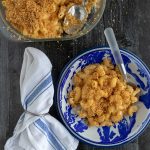 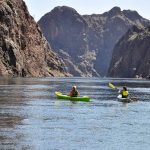