We hitched up our Bigfoot trailer December 9.   One night at a rest stop, another at a casino and two Walmarts later we arrived in the shadows of Heartbreak Hotel, the Graceland RV Park in Memphis.  Speeding over asphalt for 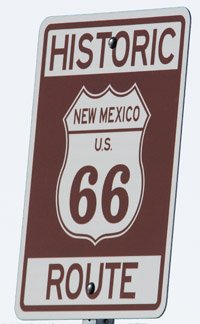 2,200 miles (at an average of 500 miles a day) was not what we would recommend or call “enjoying the journey,” but we had set our goal to be in Charleston, South Carolina, for the Christmas festivities, and this was the means to achieve that.

But let me back up.  Taking I-40 eastward from California isn’t our usual traveling pattern.  We prefer the two-lane side roads through small towns and waving locals along the route, but, 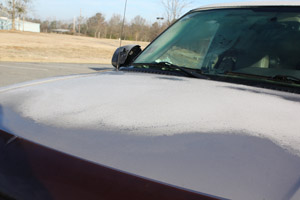 It got a bit chilly at our stop in Lonoke, Arkansas

as said above, we had a goal to reach.  What we did see was miles of desert, miles of rangeland, miles of Loves, TAs, Pilots, Shell and Chevron stations …  The most interesting sight (which I couldn’t stop to photograph) was a line of about 80 cows moseying single-file across a pasture toward the ranch.

Since I-40 interweaves with Historic Route 66, several memorable structures still stand from the days when that was the major highway from Chicago to Southern California.   While seeing the remnants whetted our curiosity, we continued on our fast-pace travels with one exception.  We exited for a quick exploratory trip to Tucumcari, New Mexico, where Route 66 is memorialized in murals and decaying roadside motels.  At least we can say we sampled history along our route. 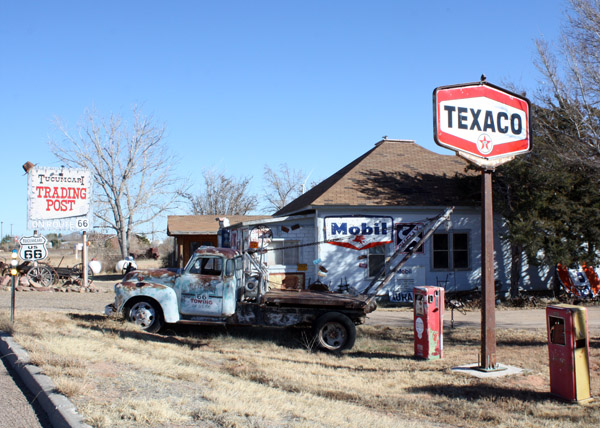 Just outside Tucumcari, N.M., are remnants of the prosperous days before I-40 shoved Route 66 aside. If taking the old route is on your bucket list, be assured there is lots to see, including businesses restored and thriving.

If you decide to follow our trail across the expanses, I hope you’ll take the opportunity to explore the past.  By way of an excuse for our “go with the flow” trip, we’ve been this way before when we did spend time immersing ourselves in the local (sometimes faded) color.

What I regretted the most about our schedule was the numerous interesting-sounding museums and tributes to American history, both 19th and 20th Century, in Oklahoma.  Seems like every off-ramp led to worthy venues.  And, incidentally, I’ll mention that not along the I-40 but not too far north of it is Claremont, Oklahoma, home of the Will Rogers Museum.  It’s one of our favorites, where we spent an entire day on a previous trip.

Our tires kept a-rollin’ across one of our favorite states, Arkansas.  I think is this the first time we’ve entered that state without spending days appreciating the lush scenery, the wonderful people and, most of all, the fantastic folk music.

If you’ll recall in the lead paragraph we were in Memphis.  Our interests, however, were not Elvis-based but Delta Blues-based, which made Beale Street world-famous.  I’ll pick up on that in the next edition.

In the meantime, HoHoHo!  Here’s hoping you have numerous opportunities to enjoy the freedom of RVing in the days and year ahead.

We arrived just behind the fire trucks at this conflagration. An oil rig service truck had a blow-out and hit the center divider outside Elk City, OK. The driver got out before the explosions, which sent debris across the interstate. Being first in line once traffic was allowed to pass, our travel trailer managed to roll over something in the road, resulting in a shredded tire repaired in the Walmart parking lot a few feet down the road. 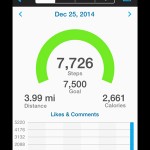