Back in the 70’s most kids my age were interested in sports, hobbies, collecting baseball cards and the like.  Not me.  For reasons unknown to my family and the scientific community, I became fascinated with all things related to recreational vehicles, sometime around the age of ten.   The reason this may seem a bit unusual is that I had never been camping, and was living in the Flatbush section of Brooklyn, New York being raised by a single working mother.

Although I had many responsibilities in helping raise my two younger sisters and looking after our house, my favorite pastime was collecting nearly every brochure from every trailer, motorhome and RV accessory manufacturer in the country.  I also wrote to every state, requesting their official highway roadmap and campground information on the hope of someday visiting their state.  We didn’t have much money, so I couldn’t join the Good Sam Club, but I was allowed a subscription to Trailer Life magazine and eagerly awaited its arrival every month to read the latest news and product reviews.  In fact, hardly a day went by that something related to my dream of RV travel didn’t arrive in the mail!  I carefully cataloged every bit of it and could quote you the cost, specifications and capacities on any rig, along with the towing and overnight parking regulations in most states east of the Mississippi.  I studied each brochure and kept careful notes and drawings in a book.  With the smooth and cunning moves of a pre-adolescent RV salesman, I’d routinely read my Mom’s mood and “follow-up” to see if she’d consider having a look at a Serro Scotty, Winnebago Brave or if she had any questions concerning the benefits of the solid axel mount design on the Airstream? I’d be available and standing by in my room should she have any questions.  Unfortunately, there were no RV dealers in Brooklyn; many of our neighbors didn’t even own cars, let alone a camper.  But my favorite time of the year was just after Christmas when the RV show came to Manhattan!  I made sure I had the money set aside for the ticket and subway fare to get me there.  At the RV show, I could actually see, touch and examine, real live RV’s!  One year I even got my mom and sisters to go with me, who summed it up best; why can’t you have a hobby like a normal child or go to the see the circus?

I got my first big break in 1976 when I convinced my Mom & Grandparents to rent a 24’ Class A with a “Bi-Centennial Interior” for a Christmas trip from my Grandparent’s home in Chicago to Marathon Key Florida.  At the expense of my studies, as soon as the deposit check was sent, I immediately began preparing and planning every aspect of the trip.  I made a wooden map board with a battery operated light for day/night navigation.  Routes and Maps – CHECKED! Woodall’s Campgrounds Guide – CHECKED! Inventory of gear and equipment – CHECKED! 8-Track Tapes, alphabetically stored – CHECKED! My grandfather’s wardrobe of powder blue and burgundy red leisure suits – CHECKED!

When the magical day arrived, I called “dibbs” on the fold down bed above the cockpit, as my dream was to sleep up on the bunk, and wake up looking out the tiny window at new, exotic places.  I was awarded my choice so long as I shared it with one of my sisters.  So, we set out on our adventure, my Mom, Sisters Suzi and Diggy, Grandparents, and my estranged, but kind “Hippy Uncle” from California with his girlfriend “Cat”.  Did I mention my mother and her brother had not spoken in years and had more than a few unresolved issues?  I guess they planned on working it out in those spacious twenty-four Bicentennial accented feet.  Remember, this was long before they invented slide-outs, basements and garages!

Being a quick study, I learned several things quickly.

However, we would go on to owning a Free Spirit Travel Trailer and have even more adventures, but that is another story.  Today we are Good Sam members and enjoy our 2010 Damon Astoria.   Call me old fashioned, but I still have a CB, listen to Motown on satellite and call “Dibbs” on the Damon’s Queen-sized bedroom that has a nice window to wake up to.  Soon, the statute of limitations will expire and we can bring my Mom back to her favorite fishing grounds in the Keys.

Submitted by Chris Baur of Houston, TX as a part of the RV Centennial Celebration “Share Your Favorite RV Memory” contest.

Don't Cry Over Spilled Milk Previous
Those Were The Days Next 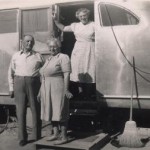