My wife and her sisters inherited a 1975 Ideal travel trailer when the in-laws got a newer trailer. My first time trailer camping we went to Ft Stevens on the Oregon Coast. When we first got there the wife and kids went exploring and I stayed at the trailer with the new dog. The mosquitos were horrible so I lit a citronella candle on the picnic table and sat down to read a newspaper ad. I went in to the trailer for a short bit and when i back came out there was a large burn hole in the middle of the picnic table cover and ashes blowing all around. Having forgotten what I had been doing outside, my first thought was “Did someone firebomb my picnic table?”. Then I remembered the newspaper. I had to explain that to the wife. The new dog we had did not like fire, everytime it crackled he would bark. Everytime we would walk away he would howl. Anytime someone walked by he would bark. Eventually the camp host told me I had to shut the dog up. So it spent most of the time locked in my truck cab. Next up was my son’s bike’s flat tire in the worst mosquito swamp I have ever had the misery to come across. I kept yelling to him “Ride on it flat ’til we get out of this!” One morning I woke up to find my water shut off. Who would do such a thing? I was worried I had cooked my water heater. So I turned it back on to find out the hose had ruptured in the night and someone had shut it off for me. Luckily I had a spare. The weekend culminated in me forgetting my 1yo son was outside and left him to wander around for a few minutes. The older boy found him on the way back from the shower. Awesome job Dad! We eventually made it home safe. Now, regardless of my first adventure ( or misadventure as it was) I love to go camping with the family! We all look forward to our outings every year. I look forward to it because it’s one of the few times where I don’t have anything else to do but be with my family. No working/painting/fixing/cleaning/mowing. Just them. Still rocking the 1975 Ideal trailer, we are always the oldest trailer in the campground.

Submitted by Ryan Mathena of Fort Stevens, OR as a part of the RV Centennial Celebration “Share Your Favorite RV Memory” contest. 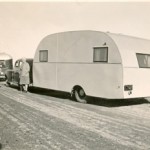 Trip of a Lifetime Previous
Family Fun Next 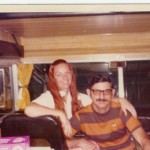