Honeymoon Camping, Lost in the Dark

My husband and I have always enjoyed the great outdoors, so it was only natural that soon after we were engaged to be married we bought our first item together – a used Coleman popup. We were so excited about our plans to go on our “first” camping trip – our honeymoon!! Needless to say when the news was announced to our parents they thought we were absolutely crazy. Never less, we cleaned our new popup and practiced setting it up like two kids with a brand new toy.

The big day finally arrived and we were off with a final wave to our still not so enthused parents. We traveled to a beautiful Georgia State Park, Skidaway Island. Our first day as husband and wife we eagerly shared the process of setting up the camper. As time went by we couldn’t figure out why we were unable to get it level. Then it occurred to my husband that we forgot to take the camper off the truck, one obstacle down and many still to go.

That first night of camping I had to take a trip to the restroom in the middle of the night. I awoke my husband to let him know I was leaving the camper. With my trusty flashlight I headed off in the direction of the well lighted bathhouse, all was fine, I smelled the burned out campfires and listened to the sounds of animals scurrying in the night. A few minutes later when leaving the bathhouse I noticed that all the roads looked the same, dark! I ventured down one passing many campers that were not mine. Those sounds that sounded friendly earlier weren’t the same any more and those burned out campfires now gave off a spooky glow. After getting lost coming back to the camper and traveling down three different roads I finally saw our little camper in the distance. I was never so happy to see that camper as I was that night. When I opened the door I was ready to reassure my husband that I was ok, since I was gone so long, only to find him soundly asleep!

As the trip came to an end we happily popped the camper down. When it was time to hook it to the truck we once again realized that a small mistake was made. My husbands keys and wallet were in the drawer inside the camper. We had to pop out camper up one more time to retrieve the keys and wallet.

After all the mishaps that occurred during our first camping trip I still treasure the experience. I wouldn’t trade that camping adventure for a four star hotel. That first camping trip with our first camper started us on a road to many trips over the years with 4 popups and eventually graduating to a hard side camper. After 20 years of camping we look back on the first trip with laughter and smiles.

Submitted by Margaret Brown of Aiken, SC as a part of the RV Centennial Celebration “Share Your Favorite RV Memory” contest. 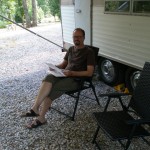