In March of 1970 I was an Air Force member with a wife, two kids, two dogs, one car and a 1959 Ford F250 that had to relocate from Luke AFB family housing in Glendale Az to a radar site north of Calumet MI. I was told that I would enjoy summer in Michigan….all two weeks of it! Research showed that temporary living quarters were in short supply so with assurances from my new commander that I would have a house on base I purchased a 17 ft travel trailer for the move. My old truck would have no problem towing this small outfit so off we went as first timers. Wife and kids in the car, me and the dogs in the truck. The trip itself was uneventful but the arrival was where the fun began.

Calumet MI in March still has the first snow from the previous September still on the ground, plus all the rest of the winter. They are still getting started with the annual “ice out” contest. We arrived to find the promised housing was still occupied so one of the men who would be working for me offered to let me park the trailer in his driveway. The snow drifts are 20 ft high from the snow blower keeping the roads open so I push the truck with trailer attached as far into the snow at the end of his driveway as it will go. I am told that my house will be ready in three days. 30 days later we are still in the snow bank. The poor guy whose driveway I’m using has to let me carry a bucket from my portapotty through his house to the bathroom as there is no access to anything on the ground…its all snow! We are filling our water tank from his house, going 20 miles to town for propane every other day so we can cook and stay warm. The next door neighbor parks his snowmobile outside our door and provides free wakeup service every morning. The kids go to school on the bus and tell their friends all they do at home is “make beds”. We survived….somehow! Everyone made us feel at home and helped as best they could through this rather “amusing” time. We must have enjoyed it as we soon upgraded to a 27′ Kountry Aire and we have been on the road ever since.

Submitted by Lawrence Hamilton as a part of the RV Centennial Celebration “Share Your Favorite RV Memory” contest. 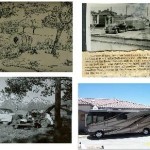 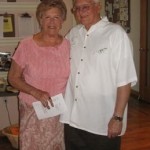