11 Reasons to Escape to the Florida Keys

Looking for an island getaway? The Florida Keys constitute that rare tropical island destination that can be reached without a plane ticket or cruise ship fare. Just follow the 106-mile Overseas Highway from mainland Florida to the chain of islands that stretch far into the ocean and light-years away from your troubles.

Camp at a Good Sam Park where palm trees sway in cool breezes and turquoise waters lap against unspoiled beaches. Enjoy iconic bars that serve up tropical drinks and join one of the quirky events, like Key West’s famous Ernest Hemingway Look-alike Contest. Hit the gas for these 11 Keys getaways. We’ve included the Overseas Highway Mile Markers, so you know how far to go. 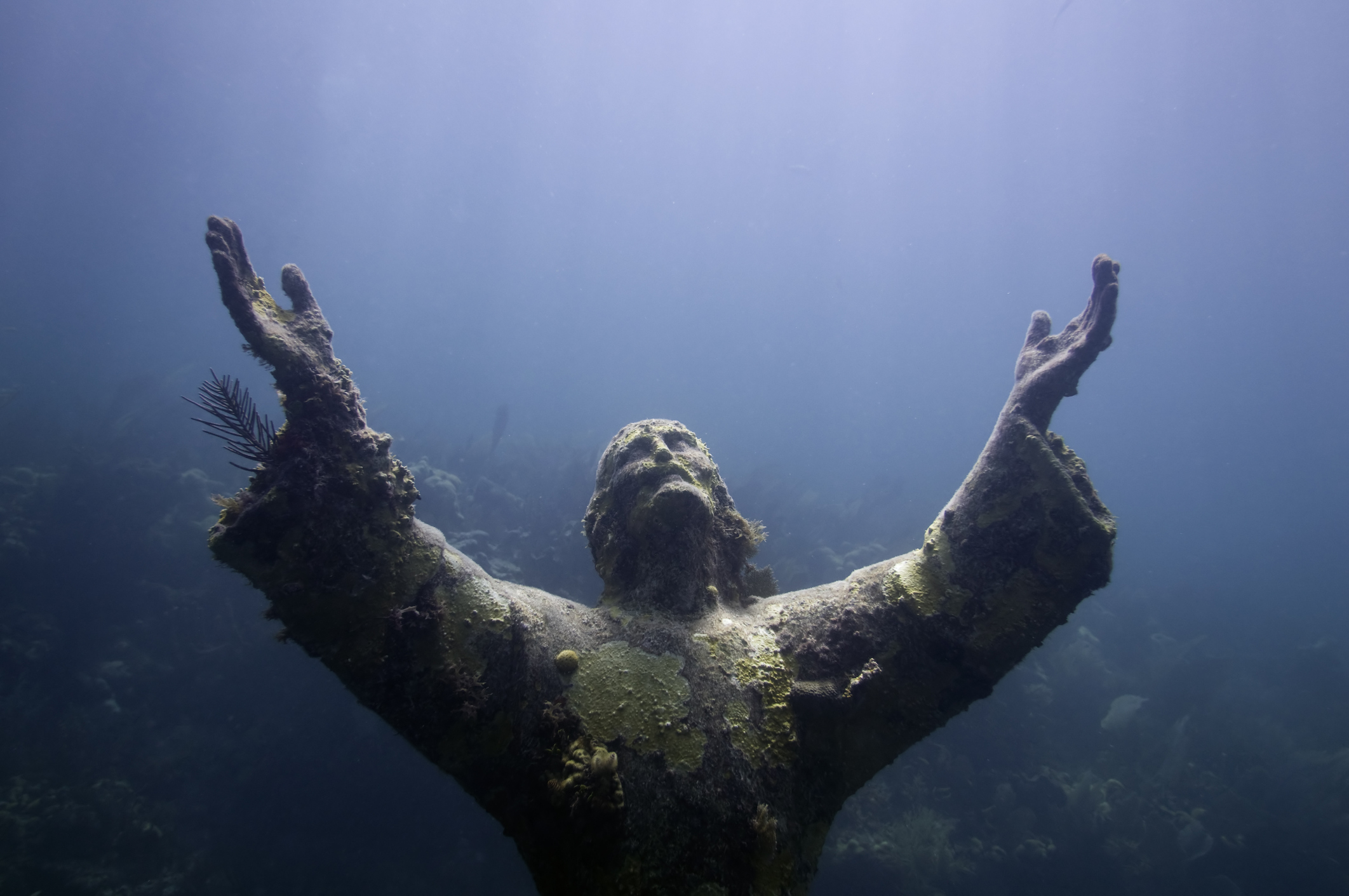 Sixty-four miles south of Miami and located in Key Largo, the John Pennekamp Coral Reef State Park entices snorkelers and divers. Established in 1963, the first state park under the sea covers a 25-mile-long and 3-mile-wide swath of ocean and is home to a stunning diversity of plants and animals. Take a diving tour and go deep to see the Christ Under the Sea statue, which stands on the seabed about 25 feet below the surface. Prefer staying dry? Take a ride on a glass-bottomed boat and witness fantastic flora and fauna beneath your feet. Bird watchers can feast their eyes on gray kingbirds, short-tailed hawks and mangrove cuckoos. 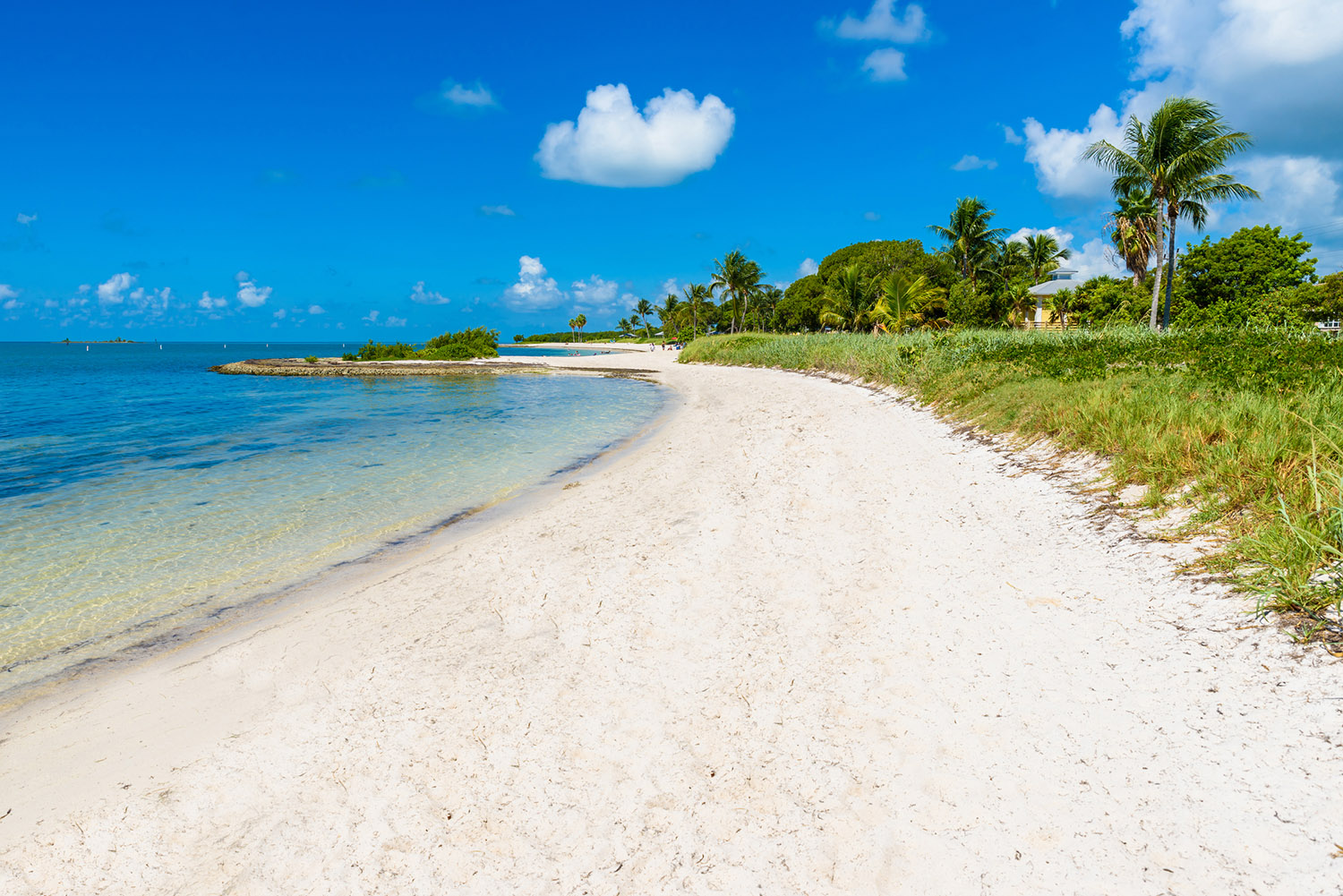 Looking for a great place to view a sunset? On the southwest end of Marathon Key, Sombrero Beach serves as the perfect setting for a barbecue, picnic or just a walk on silky sands. The long stretch of shore has handicap access on a wide, flat path, a  children’s playground, picnic pavilion and volleyball court. Dogs on leashes are allowed. Dip into the turquoise waters for snorkeling or fishing in the shallows. A short distance to the north, enjoy farm-to-table dining in a garden setting at Irie Eats, with Caribbean shrimp jerk and sweet & spicy tuna avocado. 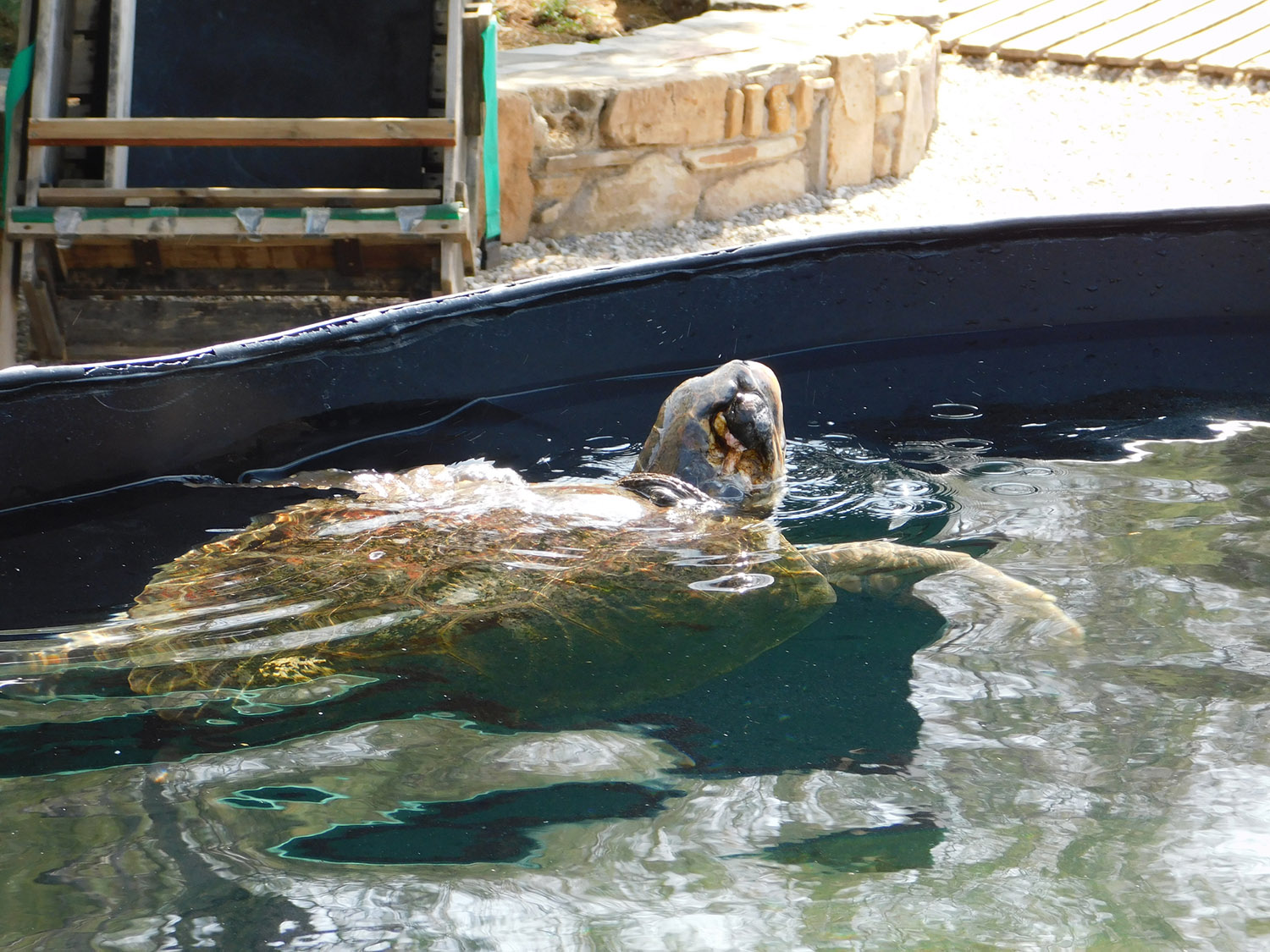 Lovers of animals won’t want to miss Marathon Key. At the Dolphin Research Center, visitors can learn about the behaviors and habitats of these highly intelligent mammals with demonstrations and exhibits. You can get a chance to swim with the dolphins and even get a free ride with a dorsal pull. Also on Marathon, the Turtle Hospital helps the vulnerable migrating reptiles heal from injuries and rescues vulnerable hatchlings. Since its opening 30 years ago, the hospital has treated more than 2,000 creatures. 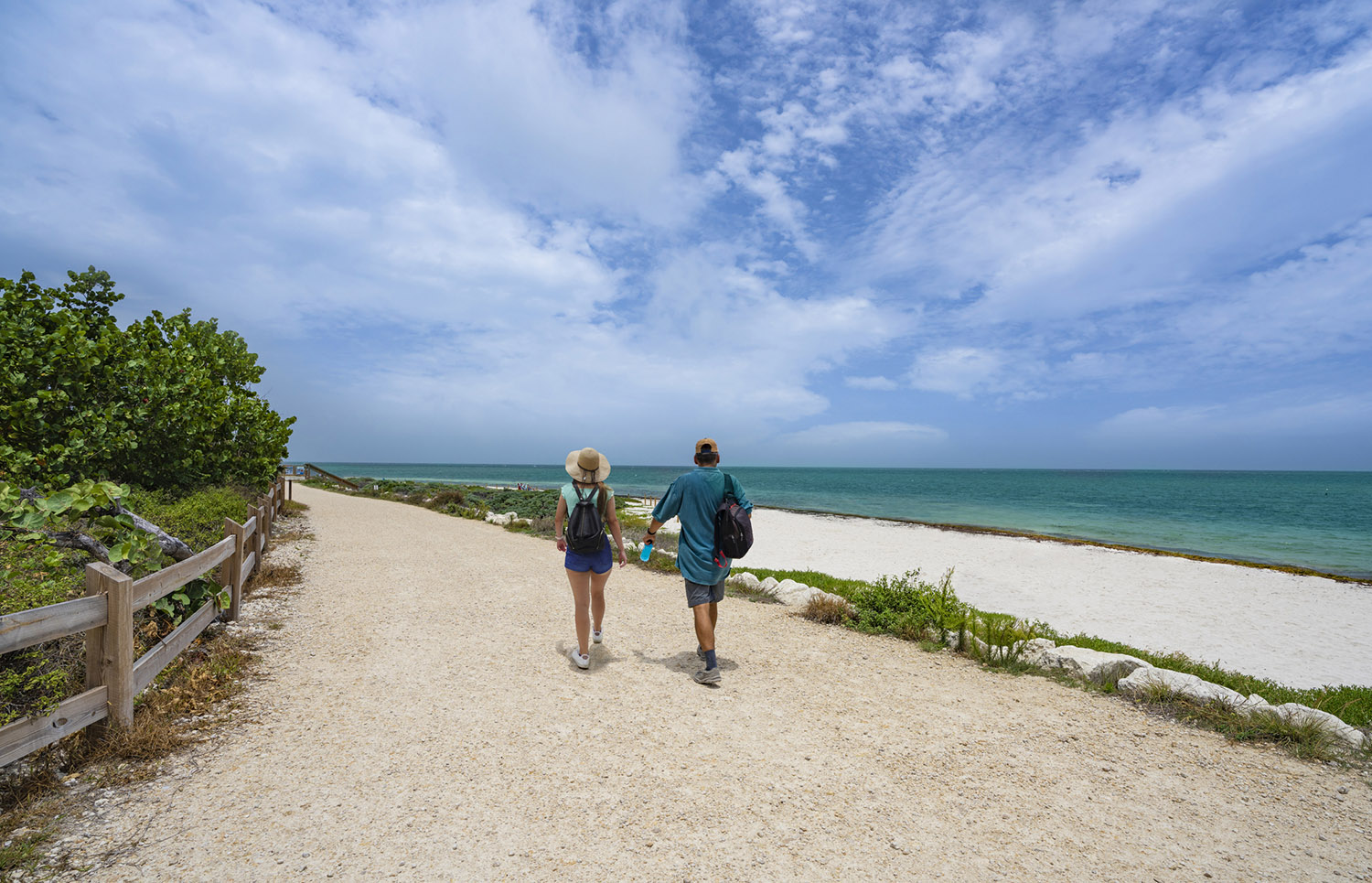 This 500-acre key packs lots of adventure both on land and sea. Hop on your bike and ride to Bahia Honda Bridge, a 5,055-foot railroad span that connects Bahia Honda with Spanish Harbor Key to the west. Although the span is now derelict, the graceful steel-truss structure serves as a stunning backdrop for selfies. Cool-down by swimming in the warm waters of the Atlantic Ocean or Florida Bay. The island’s unspoiled, white-sand beaches are great for sunset strolls. The key has 80 sites for RVers and tenters. 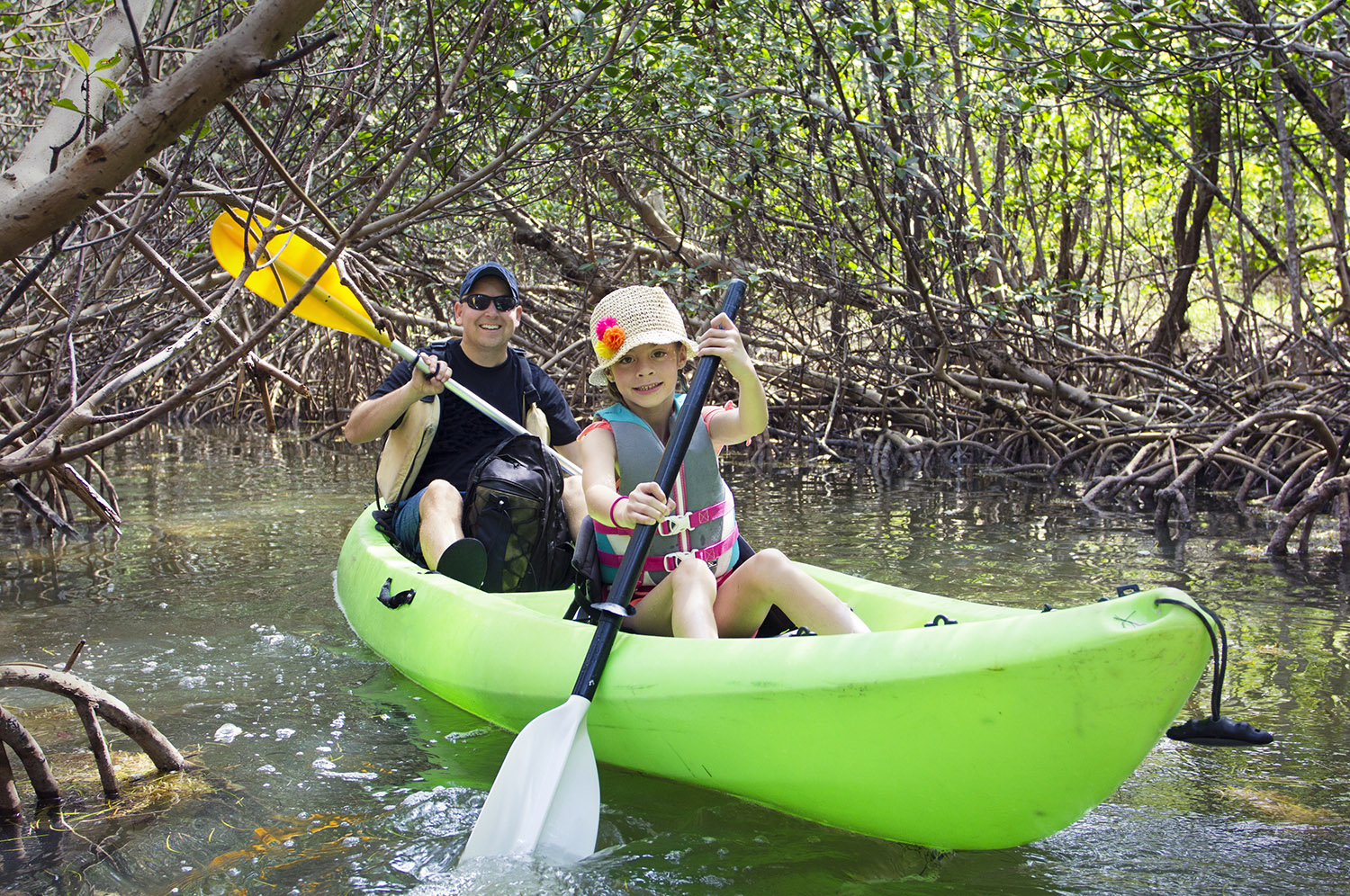 From Big Pine Key, Head west on State Road 4a to No Name Key

Throughout the Keys, mangroves grow in dense thickets on coastal areas. Kayakers can get a unique look at ecosystems they form by navigating the “mangrove tunnels” — waterways that snake under the canopies. Head to No Name Key for an unforgettable entry into this hidden world. No Name Key is Located directly to the east of Big Pine Key across the Bogie Channel on State Road 4A. Start at the Key’s Old Wooden Bridge Fish camp to start your tour through the tunnels. Several outfitters in the area offer tours of the tunnels, giving you a chance to watch herons, fiddler crabs and other creatures thrive in this setting. 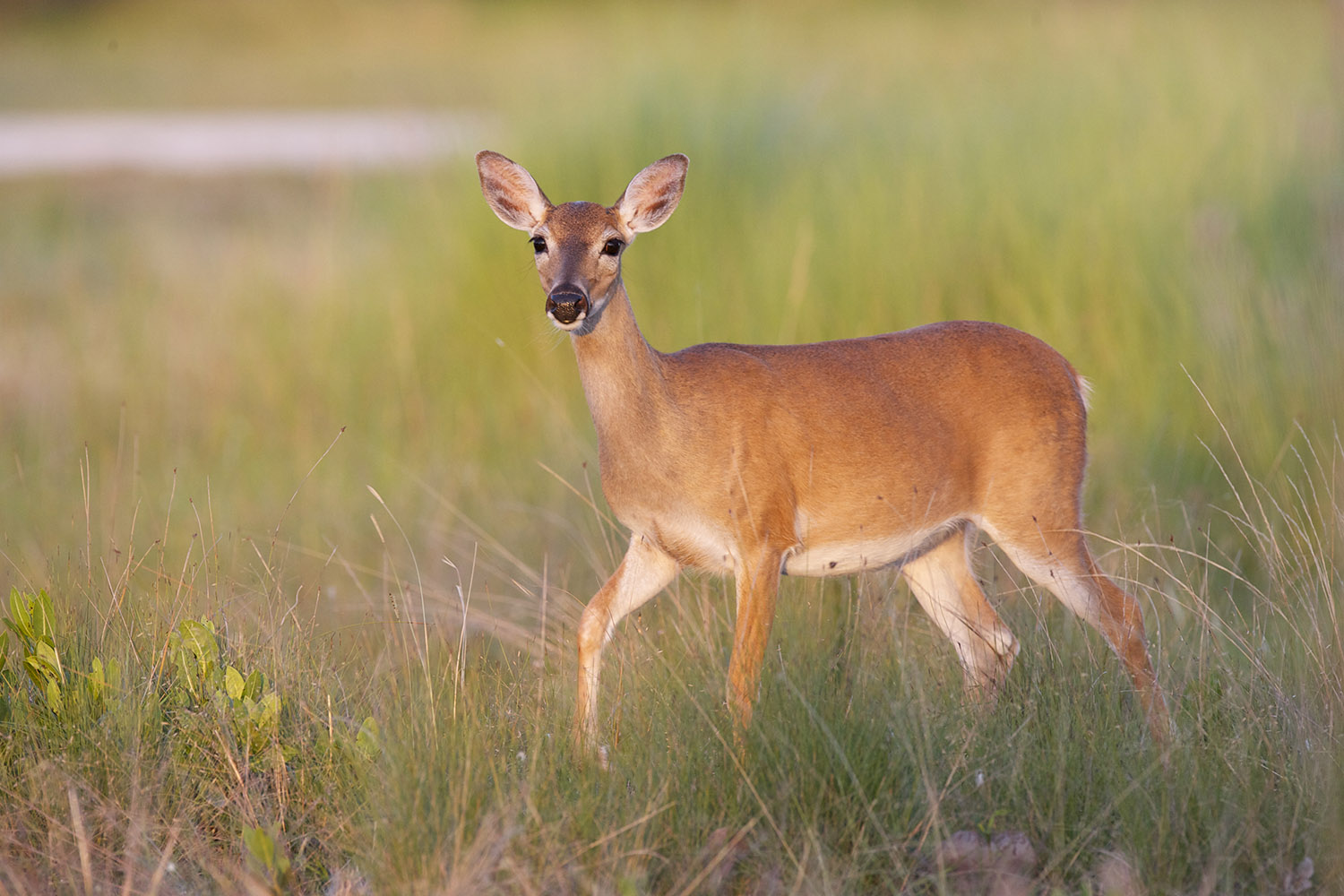 One of the largest of the Florida Keys happens to be home to some tiny deer. More than half the island’s 9.9-square-mile surface is occupied by the National Key Deer Refuge, the habitat of an endangered subspecies of white-tailed deer that is the smallest deer in North America. Spot these graceful mammals as you tour the refuge’s forests and wetlands. Also on the island is the Blue Hole, a former limestone quarry now filled with water and home to American alligators, osprey and green herons. After a day of adventures, drop into the No Name Pub, where diners can choose among big slices of homemade Key Lime Pie or tall pitchers of cold beer, sangria or soda. 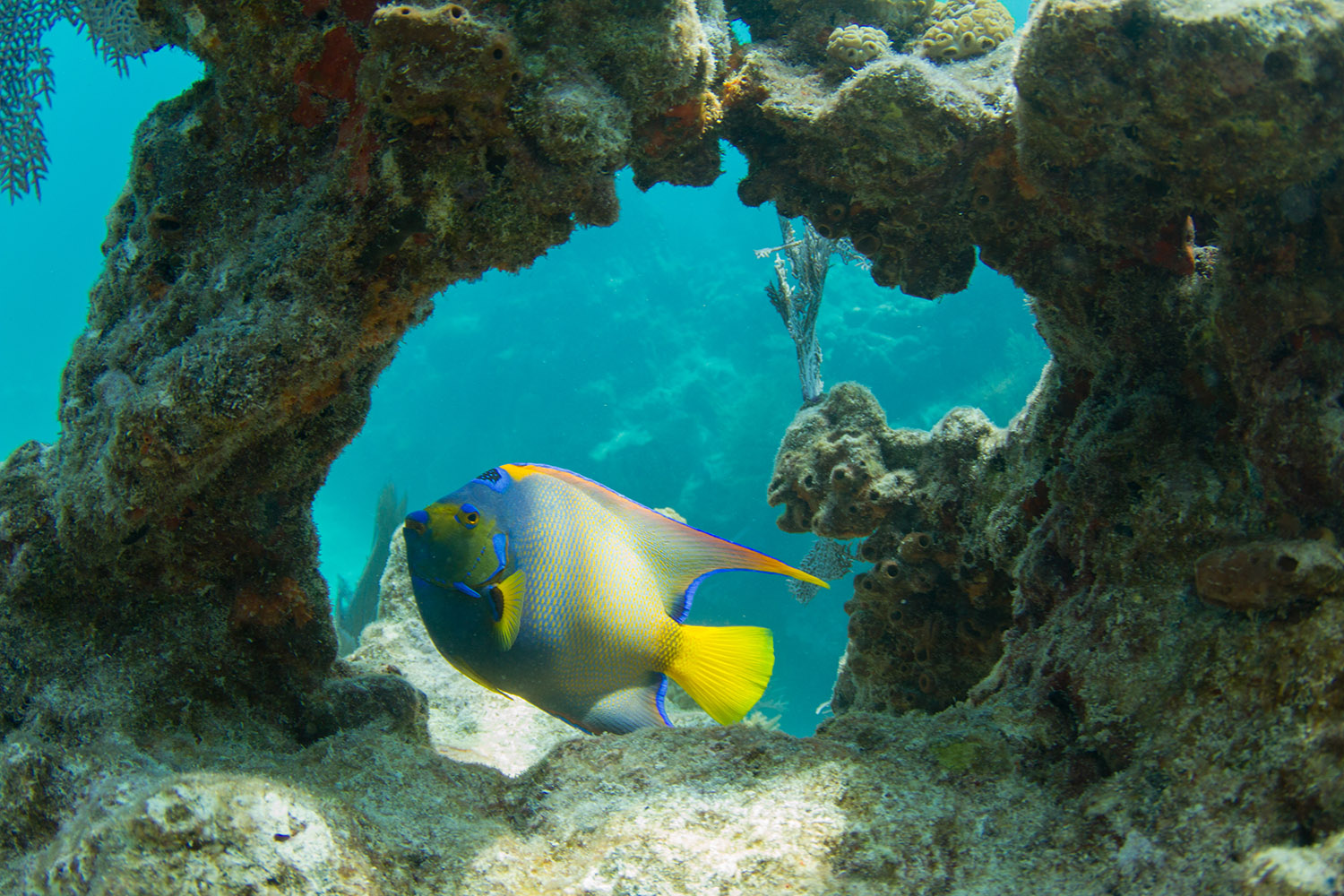 Start at the Looe Key Resort and Dive Centers for charters to take you to the site.

Watch angelfish, sea turtles and eagle rays glide through the water on a vast coral shelf. The Looe Key Marine Sanctuary encompasses the only complete reef ecosystem in the continental United States, making it a magnet for divers seeking a glimpse of unspoiled ocean life. Scuba divers and snorkelers can explore the sanctuary; sign up for a night trip to see how the environment transforms after sunset. Nearby, the August Adolphus Busch IV — a sunken cargo ship — serves as a home for barracudas, silversides and horse-eye jacks. 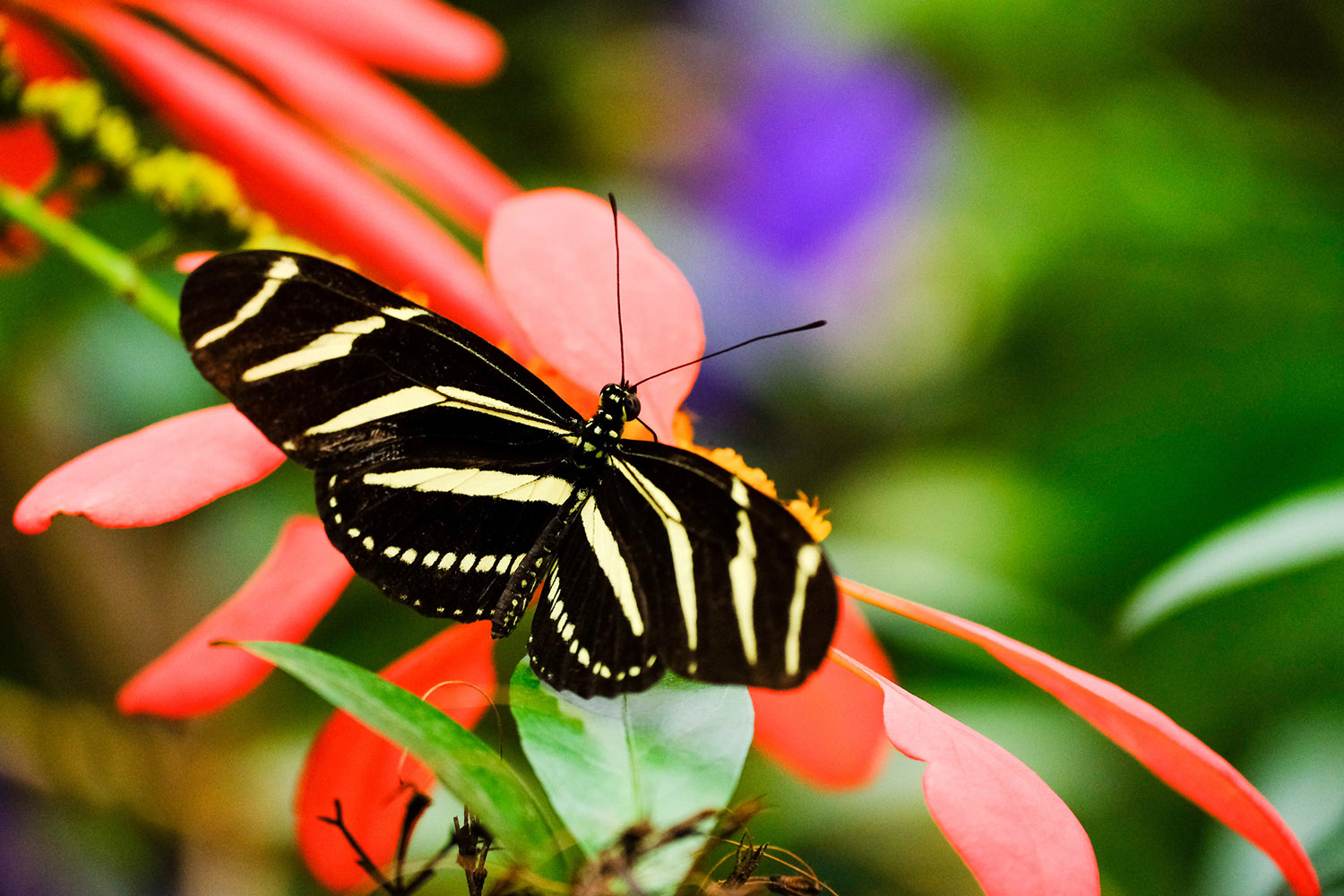 While Key West is Florida’s most famous key, neighboring Stock Island has some treasures of its own. Check out the Key West Tropical Forest and Botanical Garden, which serves as a gathering place for some of the area’s most stunning wildlife. See migrating birds — from frigatebirds to osprey — congregate around the gardens’ two ponds. Try to follow the paths of colorful insects flitting around the trees in the one-acre butterfly habitat. Smell intoxicating flowers that shimmer in colors you never knew existed. At day’s end, dine at the Rusty Anchor, which serves fresh seafood brought in from the local commercial fleet. 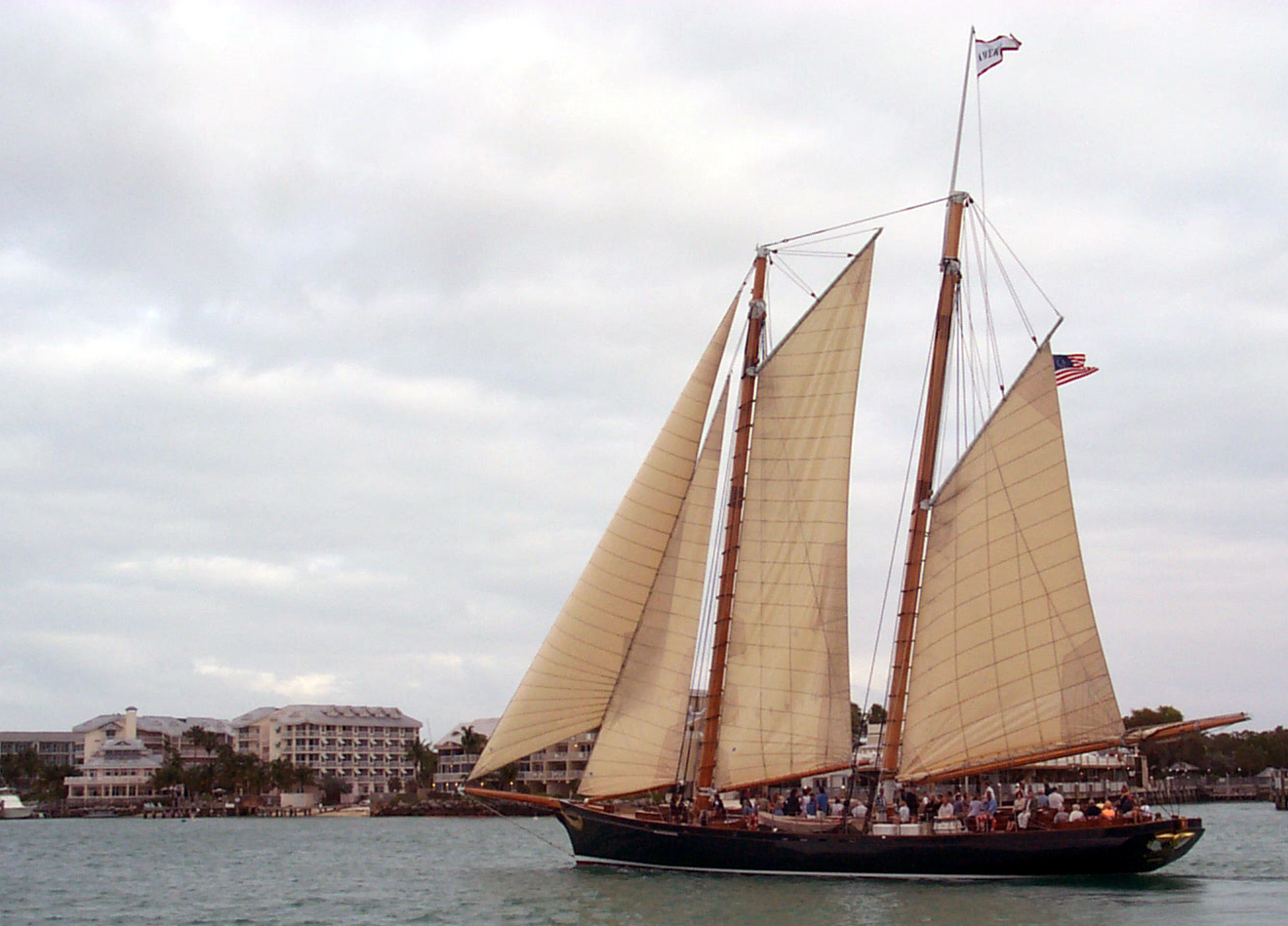 The Schooner America sailing off Key West for a sunset viewing. Getty Images

Florida’s southernmost Key buzzes with offbeat charm and irreverent attitude. Iconoclasts like Ernest Hemingway and Tennessee Williams lived here, and you can join the rollicking fun when you stroll down Duval Street. Hoist a delicious cocktail at Sloppy Joes, a favorite Hemingway hangout, or go people-watching in Mallory Square. Hop on the Conch Tour Train to visit landmarks and neighborhoods shaped by the Depression, World War II and the cultural shifts of the second half of the 20th century. Make a visit to the Southernmost Point Marker, heralding the point in the continental United States closest to the Equator. Catch a sunset cruise to see Old Sol dip below the ocean horizon. 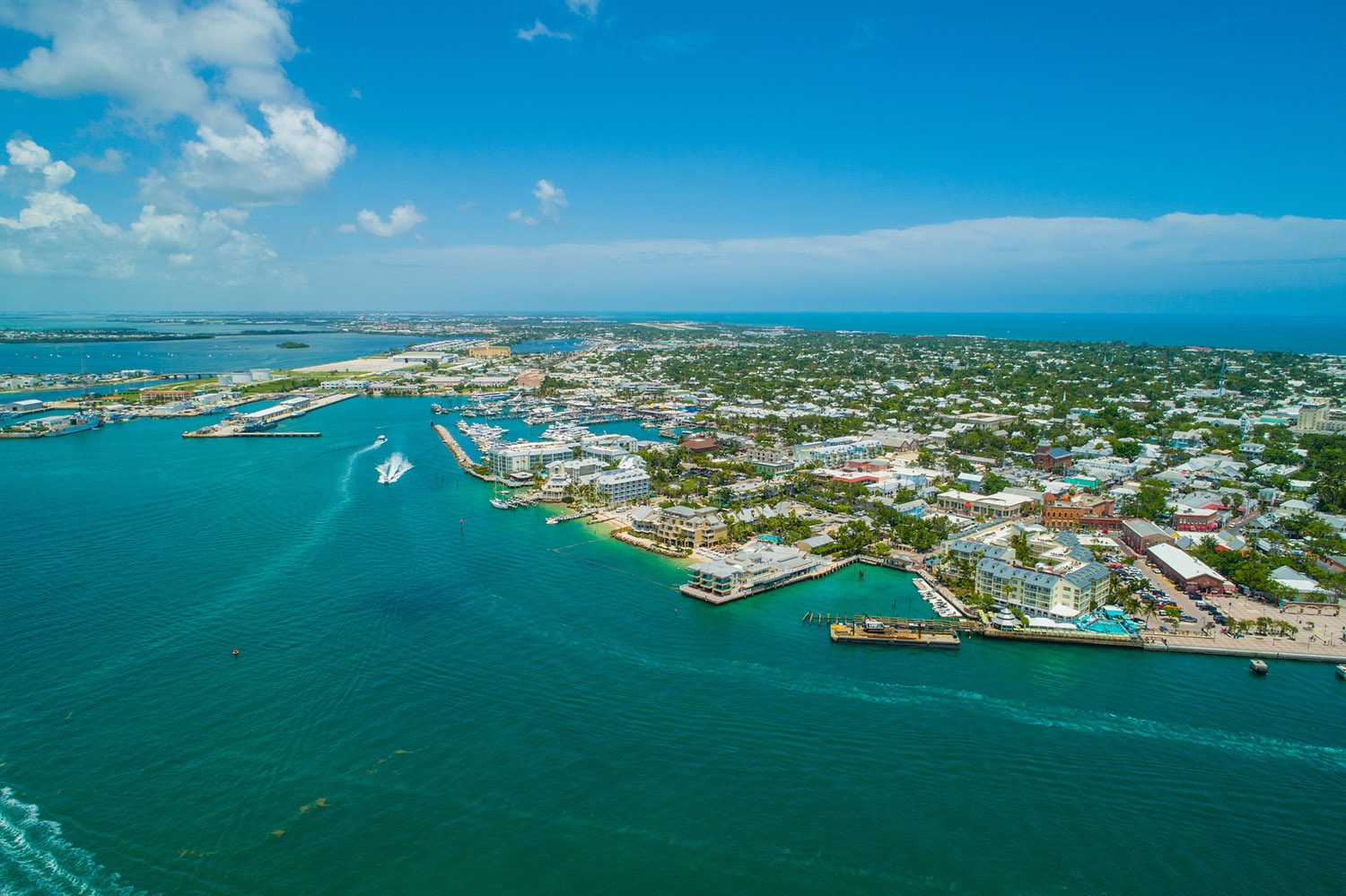 Catch the Big One Off the Keys • Mile Marker 0 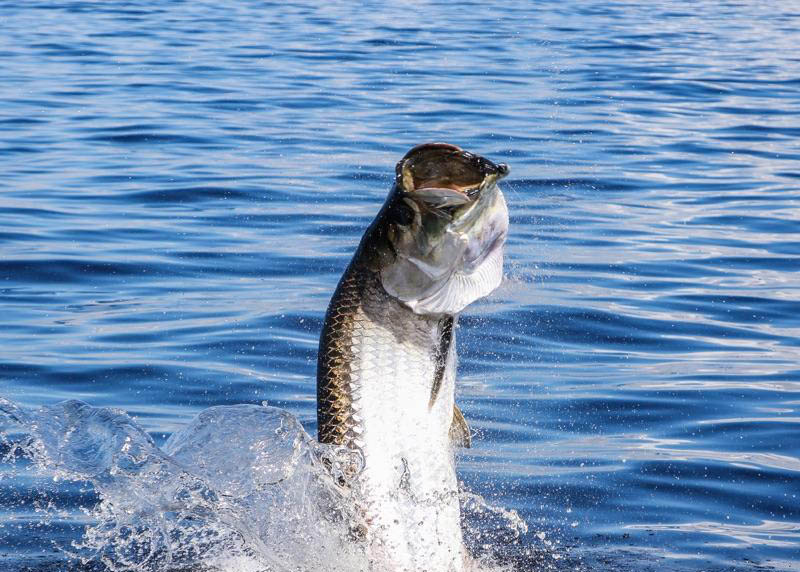 Fishing off the Keys. Getty Images

The Florida Keys are home to some of the finest sportfishing on the planet, and Key West offers a smorgasbord of sportfishing options. Choose your poison: deep sea fishing outfitters whisk anglers out to waters that teem with marlin, sailfish and tuna. Go flats fishing for bonefish and permit, which lurk inches below the surface. Head out to the “backcountry” to find a channel with tarpon, cobia and snapper.

Visit the Past in Dry Tortugas National Park 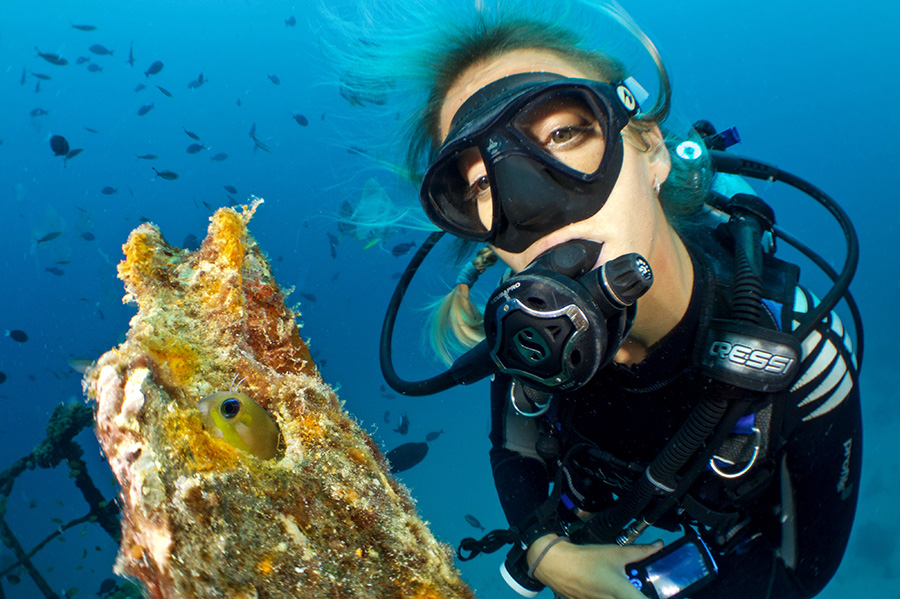 Depart From Key West via Seaplane or Ferry

Take a seaplane or ferry from the lower keys to Dry Tortugas National Park for an unparalleled underwater adventure. Consisting of 99 percent water, the park is home to the wreck of the Windjammer, a ship that sunk on Loggerhead Reef in 1901. Divers can encounter the creatures that have made a home in the hulk,  ranging from 200-pound grouper to diminutive reef fish. Also within the park is Texas Rock, a massive coral mound that pulses with vibrant aquatic life. History buffs can walk along the walls of Fort Jefferson, a hexagonal redoubt completed on Garden Key in 1826. Composed of more than 16 million bricks, the structure served as a U.S. military advance post for ships sailing the Gulf of Mexico. 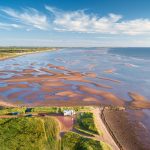 See the Sea From Your RV in Prince Edward Island Previous
Lake Pines RV Park in Columbus, Georgia: The Perfect... Next 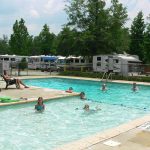