DOWN THE FLORIDA ATLANTIC COAST

This leg of our trip toward Key West will be more interesting to me than to you, but I think you’ll find the comments from readers at the end a highlight of our journey, and I hope it inspires you to add to the discussion.  We left Savannah in drizzly weather on a Saturday morning.  Once we were beyond the rain, grey skies continued to add dreariness to the drive.  Since we were staying on I-95, there wasn’t much to spark our interest.  My favorite driving diversion when there’s not much else to capture my attention is a preference for listening to public radio stations, which became a challenge on this phase of the trip, since reception kept fading out every few miles.  The lower end of the dial is overcrowded down here with preaching and Spanish-speaking broadcasts, neither of which is to our liking.

Our goal for the day was Boynton Beach, a few miles north of Miami and home of a college buddy of mine, whom I hadn’t seen in decades.  We planned to arrive in time to accompany them to a music concert starting at 8 p.m., but I miscalculated the distance, getting us in at about 8:30.  Once in Boynton Beach we were warned that the town prohibits overnighting in the Walmart parking lots, so, tired and desperate to find a place to settle for the night, we called a nearby Cracker Barrel, where we were given a welcoming reception.  It’s a great place for breakfast (all day) and was a quiet place to spend the night.

As soon as the parking lot began to fill up Sunday morning, we moved across the street to a shopping center lot, where a large retail business was boarded up.  It was there that we connected with Gerald and his wife, Donna.  Both are retired professors, and I was pleased to realize that Gerald had not lost the dry sense of humor I remembered.  Matter of fact, he wove that into a book he published a year ago about the travails of college professors. 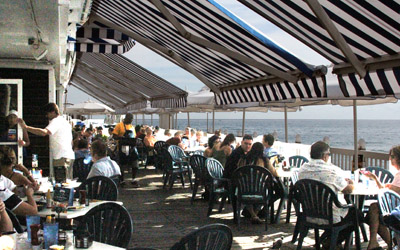 Sheltered from the Florida Sunshine by awnings, we enjoyed our shoreline brunch in Boynton Beach.

After a tour of town, lunch at a beachfront restaurant and more conversation at their home, we hitched a ride with them back to the travel trailer and departed for our final destination, Key West.

Since it is my custom to not to bore you with tales about “been-here, been-there, this is what we did,” let me contrive a moral to this story.  Monique and I spent five years full-timing and have traveled extensively since buying a cabin the mountains of Southern California.

Parked on a pad in front of our acre is the 28-foot Bigfoot, which serves as: 1) our guesthouse for non-RVers, and 2) a constant reminder of our North American wanderlust.  In 2013 we took a seven-month 17,050-mile excursion to visit family and friends in South Louisiana and other east-of-the Mississippi River states; plus a high school girlfriend in Mississippi … and then a college girlfriend in North Carolina … and then a college girlfriend in Massachusetts.  Along the way we made several new friends and dozens more when we set out on our Fantasy Tours caravan to the Canadian Atlantic Provinces.

You may be of the sort who doesn’t relish staying in touch with friends from previous lifetimes, or you may share my attitude – I liked them back then, so there’s no reason to think I won’t like them now.  I’ve enjoyed these experiences totally.

That said, I hope you will stay tuned, assuming that my flaky Internet connection will allow.  I’ll have a more interesting segment on Key West.  I now turn over the podium to readers who sent comments:

FROM Betty and Brian McGowan Hi Barry,  Enjoy your articles! Wish you would write oftener so we had a break from a certain brand of RVing along with all the stuff he promotes.

Wikipedia only lists one walled city outside of Mexico in North America. Quebec City. Charleston may have had a temp wall but Quebec City still has an inner walled “Old City.”  What cities did your guide list as walled cities?  [Barry’s Note:  Campeche, Mexico, is the other one — still part of North America.] We are now traveling from Ottawa, Canada, to Merida, Mexico, with stops along the way. [Barry’s Note:  You might want to stop in Campeche, Mexico, not far from Merida] Will return home when the snow and cold are gone in mid April…

FROM LOUIS GOLDMAN — Hi Barry and Monique.  Enjoyed your blog about Memphis and Charleston.  If it’s not too late, you may want to consider stopping [in Fernandina Beach] on your way south. FB is the only natural deep-water seaport in Florida and was vey popular during the Victorian era – the result being a Historic downtown and 50 block Historic District.  Great camping at Ft. Clinch State Park which features a wonderful pre Civil War brick fort.  Best wishes for your traveling.

FROM MICKEY RICHARDSON — I’m not sure if you remember us or not, but we used to live just off I-40 in Amarillo.  A couple years ago you two were going to stop in and meet us, but vehicle problems interfered. We (Betty and I) have since sold that house and have now moved to our cabin in the Sangre de Cristo mountains about 15 miles south of Angel Fire, NM.

Our travels often seem to mirror yours and Monique’s.  Both of our kids lived on the east coast (SC and DC) for a while and we traveled there frequently.  Last year we made a trip around the Great Lakes, spent some time at the KZ factory in Indiana, saw the fall foliage in New England and visited both kids, their spouses, and all our grandkids in the process. The trip took five weeks. I think you were in New England at the same time.  Last fall we went to Destin, Florida, then up the eastern seaboard to Charleston before spending time at our daughter and son-in-law’s home in Spartanburg.  We thoroughly enjoyed Charleston. The history is indeed as rich as the food!  We too have 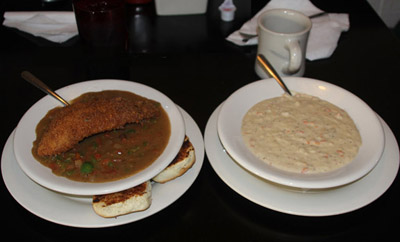 A truly excellent meal in Charleston -- I had catfish in grits; Monique, she-crab soup.

learned the difference between upstate and the Low Country.  Beautiful anytime we’ve been there.

Keep up the postings on RV net. I had just about given up on it since it had become mostly an advertising site for selling the latest gadgets. Glad to see some real RV postings there again.

As always, you’re invited to stop in for a visit whenever you are “in the neighborhood.”  [Barry’s Note:  Could happen.  We’ll call first.]

FROM BEV BACCELLI — Love reading your posts -thanks.  We’re planning to spend a week in Key West in mid-February and have a reservation at Boyd’s RV resort.  Have you ever stayed there?  We’re kind if new to RVing. Bought a used RoadTrek 4 yrs ago, now recently retired and are taking off from cold NE on 1/31 for a 10-week southern trip.  [Barry’s Note:  Haven’t stayed at Boyd’s.  As mentioned, as military retired, we have the option of staying on bases and forts.  I suggest reading the comments online]

FROM LARRY NUTTER — As usual I enjoyed reading about your trip to Charleston, SC. It is a great place to spend a few days. We were there in late September and stayed at the Navy base, very enjoyable. Hope you are having fun in the Keys. 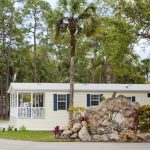