The final count is in – 2,717 units and more than 6,500 people!
Thank you for all who participated in the Atlanta Camping World/Good Sam Rally!

On the Fast Track at the Atlanta Rally

This was the Rallyís first visit to the Atlanta Motor Speedway, and the event organizers really stepped on the gas, drawing nearly 500 recreational vehicles for sale at show prices and many of the top RV manufacturers, among them Coach House, DRV, Fleetwood, Forest River, Jayco, Keystone, Heartland, Newmar, Phoenix Cruiser, Pleasure-Way, Renegade, Roadtrek, Space Craft, Thor Motor Coach, Tiffin and Winnebago. Some lucky shoppers even got to test-drive motorhomes around the famous racetrack.

Marcus Lemonis, the charismatic CEO of Camping World and the Good Sam Club and star of the CNBC reality show The Profit, greeted a full house of Good Sam members and Camping World customers. Celebrity dog trainer J.D. Platt wowed the crowd with his K9 Kings Flying Dog Show, featuring the worldís fastest Frisbee dog and a dozen other canine daredevils. Rally-goers paraded their own four-legged companions at the Release the Hounds dog show and celebrated the Halloween season at the RV decorating contest, All Hallows RV (see the list of prizewinners below). The ladies social, presented by the Henry Arts Alliance, and the youth program likewise got into the festive spirit with pumpkin-carving and -painting competitions.

On the Rallyís closing day, Good Samís 2012 RVer of the Year Fred Moore led the Salute to Veterans along with Bruce Hoster, president of Coast to Coast Resorts. Nearly 600 U.S. and Canadian military veterans marched in the procession, including four World War II vets, Henry County Highís JROTC cadets and retired U.S. Navy Captain Steve Seal, who addressed the group. Topping it all off, the Army Aviation Heritage Foundationís Sky Soldiers provided a patriotic flyover with Vietnam-era helicopters. A handful of Rally-goers signed up for the chance to soar over the speedway in one of the foundationís vintage Hueys.

As the sun set on the track, the stars lit up the outdoor stage. On Friday night, the iconic Beach Boys brought down the house with their familiar repertoire of surf tunes and good vibrations. Country music superstar Vince Gill cast a spell over the grandstands on Saturday night with his smooth tenor voice and virtuoso guitar playing. Then on Sunday, the Vogues ended the Rally on a nostalgic note with their hits from the í60s.

In the Good Samaritan spirit, Marcus Lemonis signed a check for $8,745 for Fred Mooreís Flags4Vets, a nonprofit organization that honors fallen military heroes by placing flags on their graves. Joan and Frank Anderson, Good Samís 2013 RVers of the Year, were on hand to collect blanket donations at the Project Linus booth. Named for the Peanuts comic-strip character, the nonprofit Project Linus provides huggable security blankets to children in need. 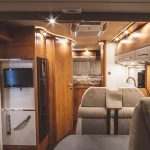