As The Twig Is Bent

I’ve only been RVing for a couple of years and still consider myself a beginner. But I realized recently that my first venture was actually many years ago. I was only about 12 years old, but it made a lasting impression on my mind.

In 1948 my parents decided that a warmer climate might be good for my handicapped step-father. So in the fall they bought a used trailer, put the furniture in storage, and we left Wisconsin for Arizona. The trailer was no shiny production rig; it was a plywood, home-built unit of about 24 feet in a rather ghastly shade of green. The hitch was a bolt dropped through a hole in the end of the tongue into a matching hole in the hitch on the underpowered (60 horsepower) car. It was pretty rough-and-ready, but something that I thought was slick was that the table folded up to close off the cupboard.

We piled way too much stuff in the trailer and headed south, taking a route that avoided a large hill outside town. I have no idea what they expected on the road ahead, but that hill was nothing compared to some of the mountains we crawled over later.

First off, one of the trailer’s wheels came off. This happened two or three times before my parents figured out that the axle was slightly bent, causing the wheel to shear off the lug bolts. In Illinois they got that repaired and had a real ball hitch installed. We started out like a clueless bunch of dust-bowl refugees, but we learned quickly. We made it to Arizona, stayed a couple of months, and then pressed on over the mountains to California.
Thinking about that trip brings back a flood of memories. I remember having to tell exactly the same bedtime story to my four-year-old sister every night. I remember spending some nights by the side of the road with the trailer shaking every time a truck went by. I remember drinking water that tasted like rubber because we used a garden hose (I don’t think there were any food-grade hoses in 1948). I remember going to the park’s central utility building to get a kettle of hot water during an Arizona sand storm and having the spills turn to mud before they hit the ground.

I also remember seeing people, places, and things that were different from the neat farms of Wisconsin: Chenille bed spreads for sale on the side of the road in the hills of Arkansas; tumbleweeds rolling down the wind in the flat, dry landscape of Texas; an old Spanish mission sitting all by itself in the desert of Arizona. It was a big adventure for a 12-year-old boy. I learned that this country was full of interesting people and places—and also that whatever problems occur, you can deal with them. That was many years ago, but I’m sure it planted in me the wanderlust that has come back so strongly today.

Submitted by Gene Bjerke of Williamsburg, VA as a part of the RV Centennial Celebration “Share Your Favorite RV Memory” contest. 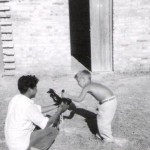 RV Pioneers, Off to Mexico Previous
Baptised Into Camping in a Grand Way Next