THE FINAL COUNT IS IN – OUR FINAL NUMBER IS 3,534 UNITS AND 7,290 PEOPLE! THANK YOU FOR ALL WHO PARTICIPATED IN THE DAYTONA GOOD SAM RALLY!

Despite the battering the northeastern United States took from Hurricane Sandy, approximately 7290 Good Sam members in 3545 RVs safely enjoyed the warm balmy weather of Daytona Beach at the last of Good Samís 2012 Rallies, held November 2 through 4 at the hallowed Daytona International Speedway.

The thousands of Rally going RVers, (plus nearly 5,000 locals who took advantage of the Rallyís day passes) werenít the only ones who were enjoying the Florida sunshine. Hundreds of exhibitor booths and a huge Camping World store were erected in the Rallyís enormous exhibit tent, which was surrounded by hundreds of both motorized and towable RVs of all shapes and sizes on display. Rally guests even had the opporutunity to drive demo motorhomes around the 2-1/2 mile Daytona track, staying well below the trackís famed banks.

Rally goers were treated to some outstanding entertainment, with Kenny Rogers performing on opening night, and the queen of country music, Reba McEntire, entertaining on Saturday evening. After Rebaís show, the debut of her new television series ìMalibu Countryî was also broadcast to guests. On Sunday evening, the Rally put on a spectacular fireworks show, right in the trackís infield.

Along with hundreds of informative seminars on all aspects of the RV lifestyle and travel opportunities, the Rally also recognized military veterans with a parade and an emotional aerial flyover of the grounds. The Good Sam Culinary Experience featured cooking tips and recipes from Food Networkís Bob Blumer, and the traditional Rally Dog Show attracted hundreds of traveling pups and their owners.

ìOur Rally program has proven to be an excellent way for industry vendors to reach our members, their customers,î said Marcus Lemonis, Chairman and CEO of Good Sam and Camping World. ìBy expanding the program this year to three Rallies, and also increasing the number of attendees at each of them, weíre bringing more and more consumers to these events and providing an excellent opportunity for vendors and their customers to interact on an ongoing basis. But our Rallies are more than that. They are a terrific way for RVers to interact with each other, making new friends to share their experiences, and having a great time doing it.î

Good Sam has scheduled two Rallies in 2013, New York State Fair in Syracuse, June 13 through 17 and October 17 – 20 in Atlanta, Georgia at the Atlanta Motor Speedway. 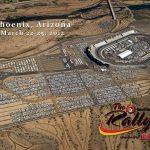