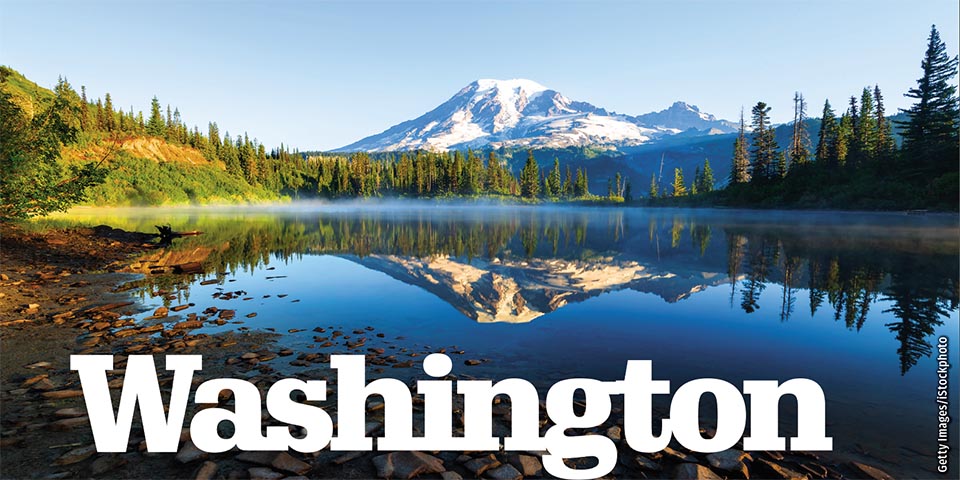 Rich soil and an ideal climate bring wine lovers to Walla Walla and other towns in southeast Washington. You can unlock the secrets of wine making and sample premium vintages at famous wine estates such as Seven Hills, Three Rivers and Woodward Canyon.

Seattle serves up dining and cultural experiences found nowhere else in the U.S. Indulge in everything from hearty bowls of chowder to flaky Russian pastries at the legendary Pike Place Market. Just a stone’s throw away is the very first Starbucks location and the historic waterfront with popular attractions like the Ye Olde Curiosity Shop, Seattle Aquarium and Seattle Great Wheel. Don’t leave the city without visiting the colossal troll sculpture in the artsy Fremont district and admiring sweeping skyline views from the top of the Space Needle.

Visible from Seattle, Mount Rainier attracts recreation seekers and scenery lovers. Draped in dense forest and glaciers, Mount Rainer is an active volcano soaring over 14,000 feet into the sky. Drive the Road to Paradise to easily reach high elevations and traverse a network of trails and climbing routes at the top. Carve some time out to explore the massive thousand-year-old trees in the Grove of Patriarchs and admire panoramic views of the Puget Sound basin near the Paradise Visitor Center.

Cape Disappointment State Park is synonymous with jaw-dropping coastal scenery. Eight miles of trails lead to secluded coves and the west coast’s oldest functioning lighthouse. The park also marks the end of the Lewis and Clark expedition. You can learn more about the epic journey and find a vantage point for humpback whale spotting from the Lewis and Clark Interpretive Center.

Lace up those hiking boots and hit the trails for once-in-a-lifetime vistas. Boasting more than 400 miles of trails winding through alpine lakes and rugged peaks, the North Cascades National Park east of Seattle packs bucket list hikes. Pro tip: Take the Horseshoe Basin Trail, which covers a glacier and 15 waterfalls. 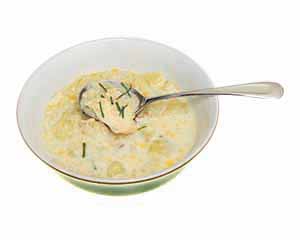 On cloudy days, nothing warms your soul like a cup of piping hot seafood chowder. The rich, creamy soup is heavy on potatoes and loaded with everything from clams and scallops to fish and crab meat. Head to Seattle’s Pike Place Market to slurp down award-winning chowders and other delights from the sea.

The showpiece of the region is the Alpine Lakes Wilderness Area, 394,000 acres in the Central Cascades. This region takes its name from the 700 mountain lakes dotted around the mountainous peaks and forested valleys of the Cascades. Forty-seven trailheads leading into the wilderness fan out more than 615 miles of trails. Part of the famous Pacific Crest Trail traverses this region, and picture-perfect Bridal Veil Falls and Lake Serene are also tucked inside. Nearby Mt. Baker-Snoqualmie National Forest and Wenatchee National Forest invite their guests to take a deep breath of alpine air.

One of the gateway communities to the Alpine Lakes Wilderness Area is Skykomish, a community known for its railroad history and its four-seasons of outdoor recreation, including hundreds of hiking trails. More than a dozen or so towns and communities are nestled along the route known as the Cascades Loop. Among them is Chelan, a resort town located on the tip of Lake Chelan, whose Native American name translates into “Beautiful Water.” 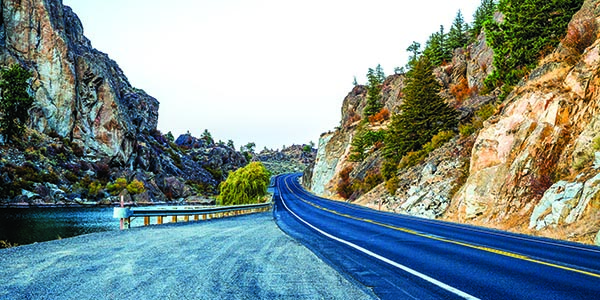 Spanning around 150 miles from the town of Connell up to Omak, Eastern Washington’s Coulee Corridor Scenic Byway is a picturesque expanse of varied landscape that follows the Columbia River’s prehistoric flood path. The corridor gets its name from coulees, channels that emerged from post-glacial floods, which are found throughout the expansive landscape.

Many travelers start their explorations of the corridor in Connel, a small historic community dating back to 1883. From Connel, it’s a short drive up to the town of Moses Lake, certainly worth a stopover for its numerous opportunities for outdoor recreation, ranging from a nine-hole golf course to several hikes. Boaters won’t want to miss the Moses Lake Water Trail, which traverses the town’s 18-mile-long namesake. Other local highlights include the mineral-rich Soap Lake, a two-mile-long body of water that  is believed to have therapeutic benefits. 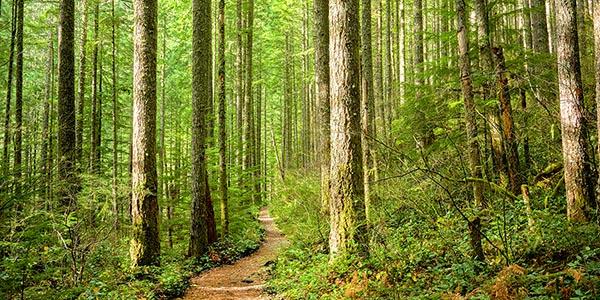 If you’re looking to hike, bike, hunt or camp, you’d be well served to dive into the sprawling confines of Olympic National Park. Encompassing more than a million acres, the park is home to snowcapped peaks, ancient glaciers, and thick old-growth rain forests. There are four different visitor centers, 16 different campgrounds, thousands of miles of hiking trails and lots of opportunities for mountaineering and wildlife viewing.

Spanning around 150 miles from the town of Connell up to Omak, Eastern Washington’s Coulee Corridor Scenic Byway is a picturesque expanse of varied landscape that follows the Columbia River’s prehistoric flood path. The corridor gets its name from coulees, channels that emerged from post-glacial floods, which are found throughout the expansive landscape.

Many travelers start their explorations of the Coulee Corridor in Connell, a small historic community dating back to 1883. From Connell, it’s a short drive up to the town of Moses Lake, certainly worth a stopover for its many opportunities for outdoor recreation, ranging from a nine-hole golf course to several hikes. Boaters won’t want to miss the Moses Lake Water Trail, which traverses the town’s 18-mile-long namesake. Other local highlights include the mineral-rich Soap Lake, a two-mile-long body of water that is believed to have therapeutic benefits. In addition, Sun Lakes-Dry Falls State Park is a great place to go birding or exploring. Along with more than 15 miles of trails for hiking and mountain biking, two horseshoe pits and an amphitheater, there are also two boat ramps and plenty of opportunities for boating, swimming and fishing.

Grand Coulee Dam is a gravity dam with a small visitor center that details the history and engineering behind the structure. The dam also runs 50-minute guided tours every day from April 1 through October 31, which takes visitors out to the dam’s Pump Generating Plant. If you’re visiting during summer, don’t miss the free, half-hour long narrated laser light show onto the dam titled One River, Many Voices. It runs every night from Memorial Day Weekend through the end of September. During the show, colorful lasers dance across the dam’s surface, creating moving images that tell the story of the rugged region. 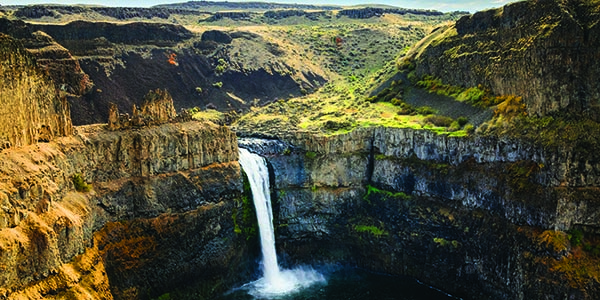 The expansive Hells Canyon and its creator, the Snake River, are the highlights of southeastern Washington state and the adjacent corners of Oregon and Idaho. Hells Canyon is the deepest river gorge in North America, plunging more than a mile below its west rim in Oregon and 8,000 feet below He Devil Peak in Idaho’s Seven Devils Mountains.

The Snake River in Washington acts as a major tributary to the Columbia River, and it’s also where Chinook salmon return to spawn, drawing eager anglers to catch-and-keep in the spring. In the fall, steelhead trout congregate in the river. The Clearwater-Snake Steelhead Derby held every November is the region’s largest fishing tournament. Local guides can take you to the best spots for reeling in bass, rainbow trout, sturgeon and, of course, salmon and steelhead.

Get the best views of the Hells Canyon along McGraw Rim. This cross-country trail runs 3.6 miles one way through semi-forested game trails. Hiking the rim trail provides views of the historic route of the Bonneville Party, a group of men whose travels would be chronicled in the writings of Washington Irving. More moderate treks can be had along the Eureka Wagon Trail, Summit Ridge Trail and Temperance Trail. These routes drop in elevation between 1,100 and 1,700 feet over a 2-mile stretch, butting up against stunning views below the canyon rim.

If you’re itching to experience the rugged beauty of North America the way Lewis and Clark once did, head up to Washington state’s Northwest Corridor. This stretch of coastline runs from Seattle to British Columbia and is full of outdoor adventure and quirky, welcoming communities.