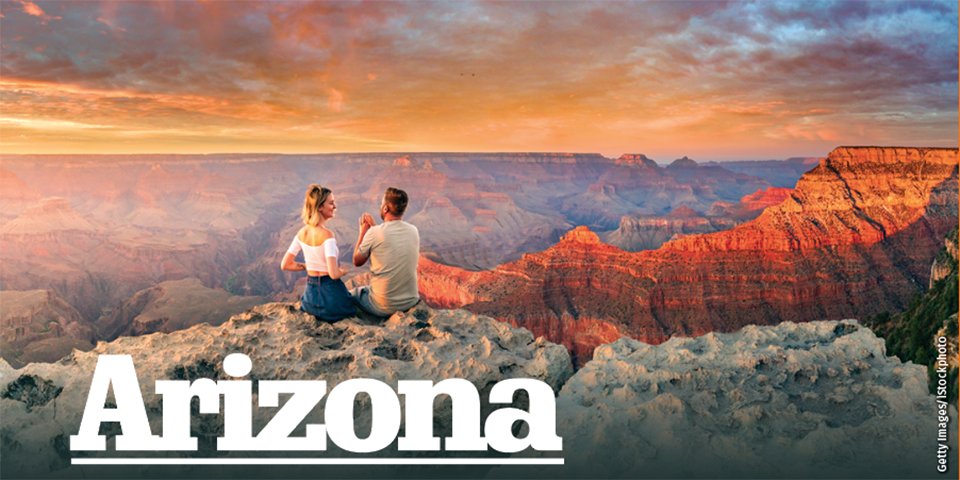 Arizona sits smack dab in America’s sunbelt, a haven for sunseekers and snowbirds escaping northern winters. Aside from warm, desert weather, Arizona is known for its stunning landscapes and sparkling cities. 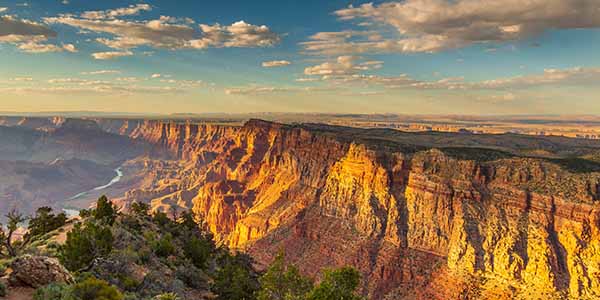 The Colorado River through the Grand Canyon at sunset. Getty Images

The iconic Grand Canyon stands at Arizona’s most popular attraction. Whether you prefer to peer down into the mile-deep canyon depths from the rim or take a journey down the Colorado River on the canyon floor, Grand Canyon National Park offers a memorable glimpse into a world-famous geological marvel.

At an elevation of 7,000 feet about 140 miles north of Phoenix, Flagstaff gives visitors a taste of alpine living. Green pine trees are a departure from the cacti found elsewhere in Arizona. Just south of Flagstaff, Sedona sits amid red rock formations that boggle the mind. Spend the day riding a bike around these geological marvels, then relax the night away at a five-star restaurant. 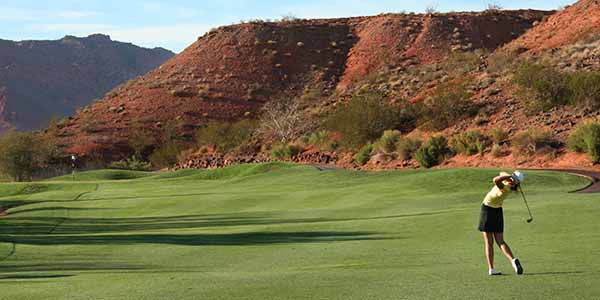 Arizona’s capital city, Phoenix stands apart for its big city attractions, scores of top-rated golf courses and surrounding mountains and hills. In the state’s southeast corner, Tucson is a vibrant hub in the midst of the Sonoran Desert, offering both outdoor adventures and big-city experiences.

Native American tribes flourished in Arizona, growing crops and creating irrigation systems in the arid landscape. This rich history can be explored at places like Montezuma Castle National Monument, Wupatki National Monument and Homolovi State Park. While not as notorious at Tombstone, mining towns like Oatman, Bisbee and Jerome offer glimpses into Arizona’s frontier history. 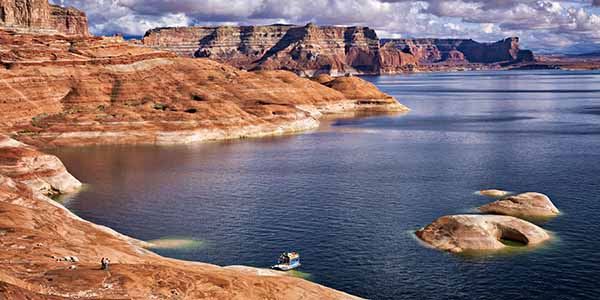 Rock Formation along the shore of Lake Powell. Getty Images

In northern Arizona, Lake Powell attracts recreation seekers for water sports amid rugged desert shores. Whether you are boating, fishing or paddling, Lake Powell will challenge you with seemingly endless inlets and bays. In central Arizona, the Salt River hypnotically snakes its way through the Tonto National Forest wilderness. 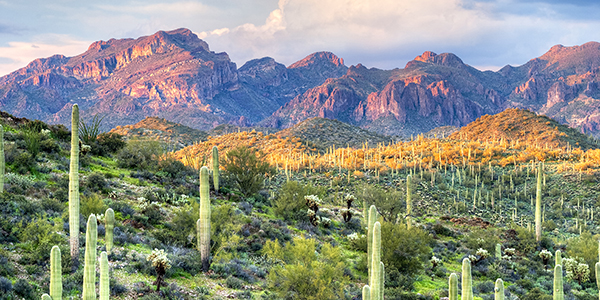 The iconic sandstone towers and buttes that formed the backdrops of so many American Westerns are here for all to see. Dozens of classic films were filmed on this site along Arizona’s border with Utah. This border is also home to Horseshoe Bend and the Wave rock formation, two of the state’s most photographed sights. 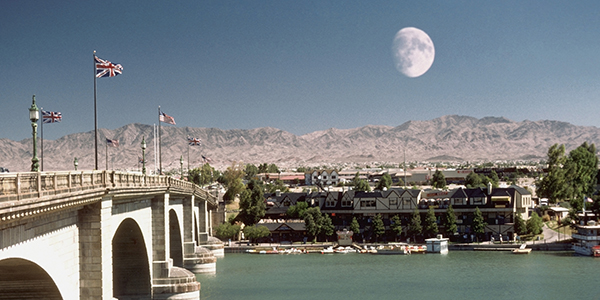 You’ll find things in Lake Havasu you never would’ve thought could end up in Arizona. Home to a legendary European bridge, kitschy English village and 20 lighthouses, this city has quirks and surprises at every turn. Pair that with a magnificent human-made lake and 300 days of sunshine and you’ve got a recipe for a getaway that’s truly one of a kind.

Discover the Largest Antique Ever Sold

City founder Robert McCulloch purchased the old London Bridge in 1968 and had it shipped more than 5,400 miles to the Arizona desert. Over half a century later, the world’s largest antique ever sold is still standing over the Colorado River. Take a stroll across the bridge for stellar views of the Bridgewater Channel and be sure to admire the decorative lampposts made from the cannons of Napoleon’s army. For the full English experience, go to the London Bridge Resort for afternoon tea. Wafer cookies, cheesecakes and scones with clotted cream and jam are just some of the sophisticated delights you can enjoy. Your host will also tell the story of how the London Bridge arrived in Lake Havasu. 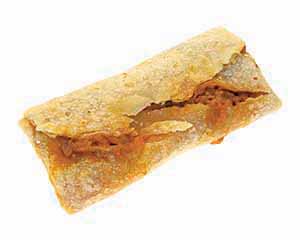 Accidentally invented when a burrito was dropped into a deep fryer, this Southwestern staple has become Arizona’s culinary claim to fame. After being packed with traditional fillings — shredded meat, cheese, beans, salsa and spices — hand-stretched tortillas are either fried or baked, adding an irresistible crunch to the classic flavors inside. Top it off with sour cream and guacamole.

Lake Havasu’s fantastic weather and near-constant water elevation provide the perfect conditions for year-round water sports. Spend your days jet skiing on 60 continuous miles of waterways, taking your family on relaxing pontoon rides through the Brightwater Channel or exploring hidden beaches by paddleboard. If you’re an angler, haul up everything from bass to crappie from several public fishing docks and piers. You can also access abundant coves by launching your boat from the many ramps and marinas. For an underwater adventure, join a scuba diving tour to discover shipwrecks and sunken planes at sites like Victoria Cliffs and Miller’s Folly.

Tee off and Trek On

Just a stone’s throw away from the lake is some of Arizona’s top golf courses. Practice your swing while soaking up exceptional views of the Colorado River from Bridgewater Links, Lake Havasu Golf Club or The Refuge Golf Course. If you’re into hiking, follow the Mohave Sunset Trail in Lake Havasu State Park which winds along lowland desert and the shoreline. The Crack in the Mountain Trail just outside the city promises a more adventurous excursion by letting you traverse a slot canyon. Looking for a real adrenaline rush? Hop on a dirt bike, ATV or 4WD truck and go on a thrilling ride through more than 20 networks of off-road trails.

If you thought the London Bridge was a surprise, wait until you see the 20 lighthouses dotting the shore. Despite being in a landlocked state, Lake Havasu somehow managed to get its share of lighthouses — and not just any lighthouses. These landmarks are beautiful replicas of famous lighthouses found on the West Coast, East Coast and Great Lakes. Walking trails lead you to most of them, while some can only be accessed by boat. Narrated boat tours bring you to more than a dozen and run between October to May.

Opened in 1989, the Havasu 95 Speedway hosts stock car races from September to May. Come early to meet drivers in the pit and then watch vehicles rev their engines and whiz around the circuit from an open bench seat. If you’re in town at the beginning of April, don your best period attire and head to the London Bridge Renaissance Faire. From costumed street performers to jousting demonstrations, this festival will send you straight back to the medieval era. September is also a great time to visit thanks to the AWSA Championship. This action-packed event brings together the world’s best jet skiers for three days of racing and freestyle competitions. When temperatures cool off, glide through the sky in a hot air balloon during the Havasu Balloon Festival or check out the Winterfest Street Festival in February for family activities, live entertainment and over 200 vendors.

Lake Havasu City was founded in 1963, but its history goes much further back than that. Mohave and Chemehuevi tribes inhabited the region and were later joined by miners when gold, silver and copper were discovered. In the 1930s, the construction of the Parker Dam brought builders and developers, which led to the creation of Lake Havasu. You can learn more about these different groups at the local history museum. Get immersed in the many interactive exhibits and don’t miss the displays by local artists.

Discover a place where cosmopolitan charms blend with raw desert wilderness. Arizona’s second-largest city combines the best of both worlds. With a multicultural vibe, eclectic food scene and to-die-for desert landscape, Tucson is an outdoor mecca with a modern edge. 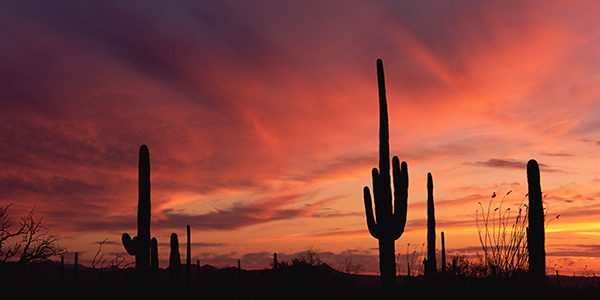 Saguaros Reach for the Sky

The towering saguaro cactus, with its distinctive arms reaching high above hikers’ heads, has become a symbol of the American West. Split between two sections that lie on either side of Tucson, Saguaro National Park is the first stop on almost every visitor’s itinerary and one of the few places left in the country to get up close and personal with its namesake flora. Learn more at the Arizona-Sonora Desert Museum or the Tucson Botanical Gardens. For a different kind of exploration, head about an hour southwest and try Kitt Peak National Observatory, where stellar discoveries await. Or head north where Biosphere 2 preserves diverse ecosystems in controlled indoor landscapes.

South of Tucson, anglers and boating enthusiasts will discover a refreshing sanctuary in the desert. Patagonia Lake State Park is the perfect place to cool off after a day in the desert. Join local fishermen casting for bass, bluegill and catfish, or enjoy a day on the water in canoes, paddleboats and pontoons available for rent at the marina.

With so many hiking and biking opportunities in the surrounding park system, you’ll be hard-pressed to squeeze it all in. Start easy with a stroll along the Rillito River Park Trail that cuts 12 miles through downtown Tucson before heading to one of the five mountain ranges that surround the city. Colossal Cave Mountain Park southeast of town plays host to archaeological sites and incredible underground geological formations. More intrepid hikers should try the 8.2-mile round-trip route to Seven Falls in Sabino Canyon. Rated the No. 1 trail in the area, it’s home to waterfalls, wildlife and lush mountain landscapes.

In the desert outside of Quartzsite west of Phoenix, the Bouse Fisherman Intaglio has intrigued visitors for generations. This outline of a fisherman was carved into the ground by ancient native residents of the region centuries ago. Archaeologists can’t decide on the precise date of its creation. The area’s indigenous people also are responsible for petroglyphs found at Dripping Springs near the privately owned Gold Nugget Mine. Hundreds of pre-Columbian images—many of which can only be spotted from the air—are carved on boulders throughout the area. 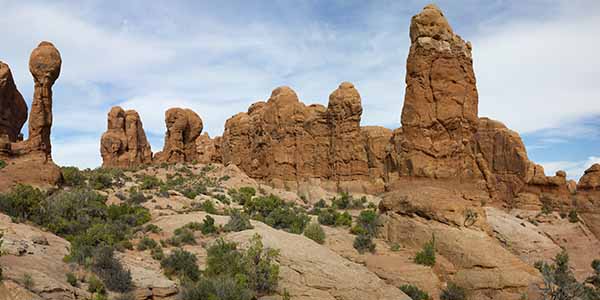 Wildlife in the Sonoran

Another popular destination near Quartzsite is Kofa National Wildlife Refuge, which comprises nearly 670,000 acres of Sonoran Desert and is home to desert bighorn sheep and the California fan palm, the state’s only native palm. A trail guides hikers into the refuge’s oasis-like Palm Canyon, where clusters of California fan palms grow in the shadow of sheer canyon walls. Many of the trees live for as long as 90 years. The canyon is cut through a type of volcanic rock called rhyolite; in some areas, large boulders made of smaller rocks cemented together, called breccia, can be spotted.