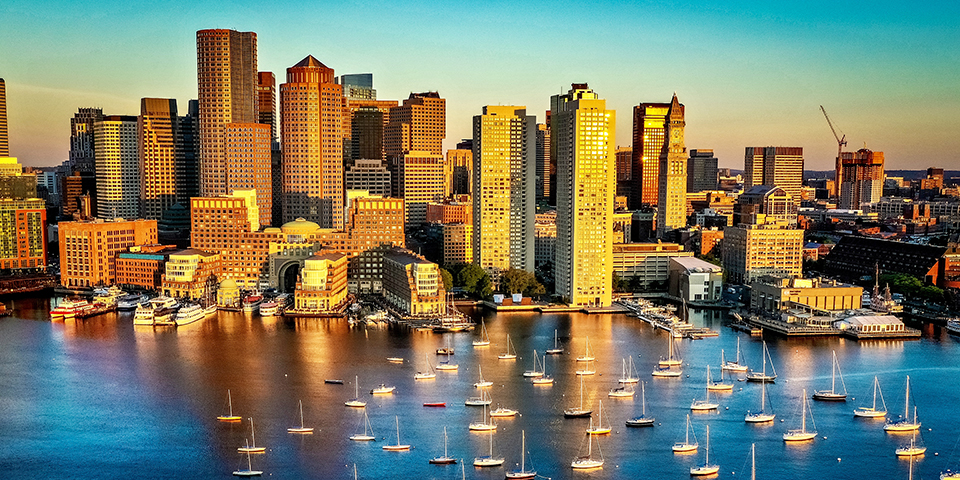 Bay State history isn’t limited to museums. America’s past comes alive on the streets of Boston, on windswept Atlantic shores and on amazing islands. Experience Massachusetts history with a 21st-century twist.

Boston is home to scores of museums, an avid sports culture and almost four centuries of history including playing a main role in the American Revolution. Walk through history or bike around town for an up-close look at the “Hub,” so-called for more than 50 colleges and universities here, including Harvard, MIT and Tufts. 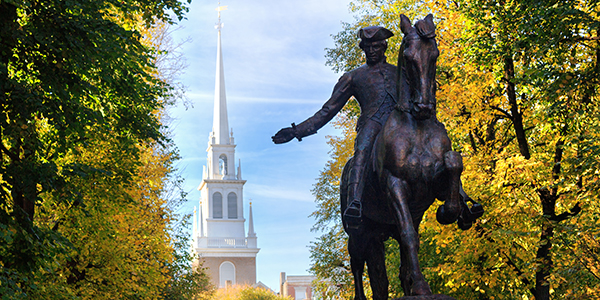 Pull on your sneakers and hit the Freedom Trail, a 2.5-mile guided tour to 16 American Revolutionary hot spots wending from Boston Commons to Faneuil Hall. The Boston African American Trail showcases 10 historic sites scattered throughout Beacon Hill, including the Maritime Underground Railroad. Stroll in the footsteps of Suffragists on the Women’s Heritage Trail and learn how Boston women secured the right to vote.

Paddle your canoe on the Charles River with scenic stone bridges and tree-lined banks. Buckle up for the Boston Water Sports Excursion speedboat ride with all the thrills (and chills) of a rollercoaster on water; be prepared for a wet and wild trip through the harbor. Take a two-hour Boston Harbor Islands National and State Park cruise and discover 34 islands. Scout out three historic lighthouses: Long Island Light, Graves Light and Boston Lighthouse, the oldest continually operating light in the country.

History Not Your Cup of Tea?

Beantown has an active sports community and a favorite cycling route is the 11-mile rail-trail Minuteman Bikeway. The Emerald Necklace, a five-mile chain of nine downtown parks, provides impressive vistas along walking paths. The nature walk at Arnold Arboretum includes two waterfalls and more than 17,000 plants and trees tagged to educate about horticulture, botany and ecology. Score a home run with a tour of Fenway Park, the oldest active baseball park in Major League Baseball, and one of the most beloved in America. If there’s time, grab a beer at The Bleachers Bar located under the ballpark seats with awesome outfield views.

It’s been decades since the 1980’s sitcom held a prime-time spot but today visitors still vie for their favorite character’s barstool to swig a beer at Cheers on Beacon Hill. Order an authentic bowl of Boston Clam “Chowdah” or finish a Norman Burger and get your name of the Wall of Fame. Cheers: “Where everybody knows your name.” 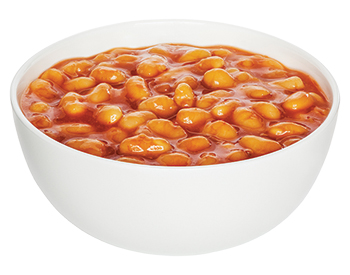 Celebrations are a popular feature of Boston life. Saint Patrick’s Day is the best time to visit for party people and those interested in Irish American culture. The annual celebration of Ireland’s patron saint attracts tens of thousands of green-clad revelers every year, and the annual Saint Patrick’s Day Parade, held on the Sunday closest to the holiday, is the second-largest St. Paddy’s Day fete in the nation. Another big festival is Patriots Day in April, which commemorates the battles of Lexington and Concord. The festival coincides with the Boston Marathon.

Be sure to visit “Boston’s Left Bank,” also known as Cambridge, home to Harvard University and the Massachusetts Institute of Technology (MIT). You’ll find musicians, puppeteers and jugglers among the entertainers at Harvard Square, while culinary masterpieces are created at Central, Kendall and Inman squares. Of course, places like Faneuil Hall Marketplace, Boston Public Market and Haymarket offer shopping, dining and entertainment. Enjoy gourmet dining and world-class shopping.

Turn the clock forward and enjoy the Boston of the 20th and 21st centuries. Perched atop a 50-story skyscraper, the Skywalk Observatory serves up sweeping views of contemporary Boston, whose diversity is as rich as its love for its home sports teams.

While the Freedom Trail is the main draw for history buffs, there are quite a few other popular old attractions throughout town. These include the Boston Public Garden, a 24-acre expanse of trees and plants that dates back to 1837. Take a ride on a beautiful swan boat and glide through the scenic lagoon with a pilot at the helm. The swan-shaped vessels have charmed passengers since 1877.

The Rose Fitzgerald Kennedy Greenway is a mile-and-a-half stretch of public space connecting the downtown area and the harbor. Visitors can ride the carousel, enjoy public art, shop at a farmers market and tap toes to live performances. While at Boston Harbor, visitors can watch historic tall ships, like the Liberty Clipper, an authentic replica of the schooners that plied these waters in the 1800s.

Boston has a vibrant cultural scene, and its award-winning Symphony Orchestra is considered among the greatest in the nation. The Boston Pops, likewise, has gained popularity for its repertoire of popular and light classical music. Culture vultures won’t want to miss the Museum of Fine Arts, which houses a stunning collection of 18th- and 19th-century American and European paintings along with artifacts from the ancient world and a huge collection of photographic works, prints, drawings, jewelry, textiles and musical instruments. New galleries at the museum include the Arts of the Pacific, which displays works from Micronesia, Indonesia, Melanesia and Polynesia. There’s also a gallery dedicated to art from the Benin Kingdom in West Africa, a gallery dedicated to ancient coins, and a number of ancient Greece-themed galleries covering subjects ranging from Greek theater to Homer and the epics.

Cape Cod is where the Pilgrims landed before sailing on to Plymouth Rock. It’s home to an iconic national seashore, centuries of maritime history, 18 historic lighthouses and the infamous “Ocean’s Graveyard,” where more than 3,000 ships rest in the deep. Wander through 15 charming villages that make up Cape Cod before grabbing your bike and cycling the Shining Sea Bikeway for breathtaking ocean views. 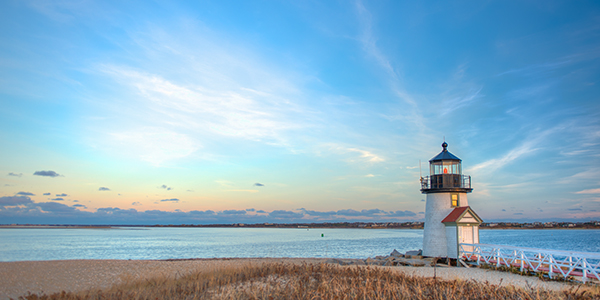 Cape Cod National Seashore is an American treasure, with 40 miles of pristine beaches, acres of wild cranberry bogs, briny marshes and diverse uplands; all practically untouched for 150 years. Hike through acres of fir trees at the Atlantic White Cedar Swamp before heading for an up-close look at the massive dunes in Provincetown. Off-roading enthusiasts can try their hand with oversand beach driving while nature-lovers will enjoy a ranger-guided canoe trip (take the binoculars). Visit the home of a whaling captain and climb to the top of a lighthouse.

Boat out to the Stellwagen Bank Marine Sanctuary for views of humpback, minke, pilot and fin whales along with white-sided dolphin, harbor porpoise and seals. When traveling inland, notice the charming coastal villages, lighthouses and beaches. Kayak the Great Salt Marsh, wade wild cranberry bogs, and head to the ocean, Bay or Outer Cape for paddle and snorkel.

Have a Whale of a Time

Nantucket Island, once home to the largest whaling industry in the world, hosts the Whaling Museum, with exhibits from the era when 125 whaling ships called this port home. In Brewster, touted as the “Sea Captain’s Town,” resides The Cobb House, a museum that shares stories about legendary skippers. At Whydah Pirate Museum, see and touch actual pirate plunder.

Sometimes called the Lower Cape, the Outer Cape boasts ample attractions. The town of Truro is home to Highland Light Station, the oldest lighthouse on the peninsula, and its adjacent museum features old relics from the Cape’s whaling industry. Eastham has many more lighthouses and is the start of many hiking and biking trails. Wellfleet contains plenty of old-time charm, from the town’s old drive-in theater to the Preservation Hall, a 1910 church that’s been restored and transformed into a community center.

Provincetown, at the very tip of the Cape, has long attracted artists who come here for its gorgeous views and bohemian atmosphere. Commercial Street is full of art galleries and history lovers will enjoy the Provincetown Museum, with exhibitions on Pilgrim history. Another fascinating attraction is the Provincetown Library, which houses a half-scale model of a fishing schooner.

Just seven miles off of peninsular Cape Cod, Martha’s Vineyard is a popular vacation spot for East Coasters during the summer months. The island was once inhabited only by the indigenous Wampanoag people, and many still live there today. In the 17th century, Europeans settled on the island, and it became a hub for the whaling industry in the 19th century. It would later become a popular spot for celebrities and well-heeled vacationers, who are drawn in by the island’s gorgeous beaches and quaint towns. Nature lovers will love the colorful clay Gay Head Cliffs and the elegantly manicured Japanese-style Mytoi Garden. History buffs can learn more about the island at Martha’s Vineyard Museum or simply wander through the charming lanes of the colonial town of Edgartown. The quaint dollhouse-like Gingerbread Cottages in Oaks Bluff are popular with kids and adults alike and Riverhead Field is a great spot for families to try their hand at disc golfing. It’s worth the ferry ride to get to this charming getaway. 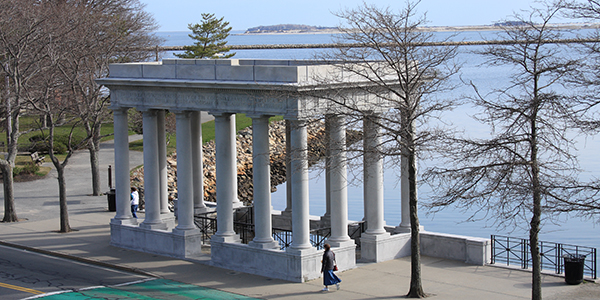 Facing Cape Cod Bay is the site of a historic colony. From the most famous stepping stone in American history to the first Thanksgiving, the town of Plymouth needs little introduction when it comes to the realm of legend and lore. It was here, in 1620, that the Pilgrims made their first colony.

As in those early days, the modern-day city of Plymouth starts at the water’s edge and moves inland. When you first arrive in town most of your attention will be directed at Pilgrim Memorial State Park, which hugs the shores of Plymouth Bay and serves as a kind of doorstep to the downtown area.