California is where dreams become a reality. From meeting Mickey and Minnie in Disneyland to sipping vintages in Napa, to road tripping along the sun-kissed coastline of Big Sur, the Golden State grants all your wishes and then some. Tick off your bucket list and then stay a while to experience the rugged Sierra Nevada mountains and all the glitz and glamor of Hollywood. From Silicon Valley to Wine Country

Epic urban getaways are guaranteed, thanks to California’s diverse mix of world-class cities. In San Francisco, dig into fresh seafood along Fisherman’s Wharf, admire the iconic Golden Gate Bridge and take a drive down Lombard Street, the most crooked road in the world. You can also take a ferry to Alcatraz Island to see the infamous prison that once housed America’s most notorious felons.

Straddling Northern California’s eastern border with Nevada, Lake Tahoe shimmers with topaz waters that will make you want to bust out the canoes and sailboats. If you’re new to water sports, enroll at the High Sierra Waterski School to learn the ins and outs of its namesake pastime along with jet skiing, kayaking or paddleboarding. The lake also supports large populations of mackinaw, kokanee salmon and brown and rainbow trout. You can reel in these prized catches from the Truckee River on the west shore, Boca and Stampede reservoirs in the north or Taylor Creek in the south.

Every family vacation needs to include a stop at Disneyland. The Happiest Place on Earth is located in Anaheim and promises a magical day filled with rides, shows and character experiences. Planning a romantic getaway? Whisk your partner to Sonoma or Napa Valley and spend your time touring scenic vineyards and indulging in award-winning wines.

Los Angeles is the perfect mix of beaches and pop culture. Visit iconic attractions like the TCL Chinese Theatre, Walk of Fame and Grammy Museum. When you’re done being star-struck, head to Santa Monica pier for old-fashioned amusements or Venice Beach to watch the city’s most eccentric characters stroll the boardwalk.

Channel Islands National Park is located just off the coast of Ventura County and has been hailed as the “Galapagos of North America.” This ecological wonderland is filled with rare plants and an abundance of wildlife. Paddle around the five islands and you’ve got a good chance of encountering whales, seals and dolphins. 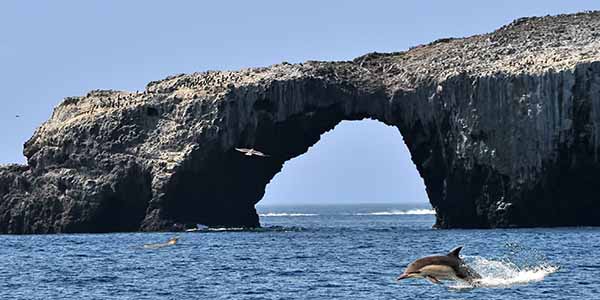 California may seem young with its carefree spirit and fresh perspective, but its natural wonders have been around for over a millennium. Witness these treasures at Redwood National and State Parks. Declared a UNESCO World Heritage Site in 1980, this protected area houses the tallest trees on the planet. Hike the Trillium Falls Trail or Prairie Creek Trail to gawk at ancient redwoods or drive down the Newton B. Drury Scenic Parkway to enjoy the peaceful landscape from your car.

Death Valley National Park looks straight out of another planet with its stark badlands, mountainous sand dunes and endless salt flats. These otherworldly landscapes have been used as the backdrop for countless movies including Star Wars and Blade.

See where the Golden State all began in San Diego. Juan Rodriquez Cabrillo arrived at Point Loma in 1542, making him the first European explorer to set foot on America’s West Coast. You can learn more about his landing at Cabrillo National Monument. Watch the Age of Exploration film at the visitor center and then visit the nearby Old Point Loma Lighthouse, which has been restored to its 19th-century appearance. Old Town San Diego State Park also gives you a glimpse into the past with over 20 adobe buildings and rustic wooden structures dating back to 1821. Wrap up your history lesson with a trip to the Gaslamp Quarter, a historic neighborhood lined with Victorian architecture and buzzing with trendy restaurants and bars.