Yuma’s unfailing sunny weather and prime location on the Colorado River lure snowbirds and outdoor enthusiasts year-round. A short drive from the city, wildlife refuges, rugged topography and dynamic waterways promise a robust inventory of land- and water-based activities. Downtown, a handful of sights speak to the city’s historic significance. During the Wild West days of the mid-19th century, all roads led to the Yuma Crossing, resulting in its moniker, the “Rome of the Southwest.” Yuma has worked hard to increase its tourist cachet with an artfully restored historic district peppered with shops, restaurants and galleries.

Yuma is the largest city in the Yuma Desert, a lower-elevation section of the Sonoran Desert composed of sparse vegetation and sand dunes. Located just off Interstate 8, Yuma lies 11 miles east of the Mexican border, 4 miles south of the California border and just west of the Gila River’s confluence with the Colorado River. Yuma’s intense desert climate is characterized by extremely hot summers and warm winters. The mercury rises as high as 107 degrees in July, the warmest month. Yuma earns the title of the sunniest place on the planet with virtually cloudless skies during 90 percent of the daylight hours. Fortunately, the waters of the Colorado River provide visitors with a way to cool off.

The Yuma Valley’s wild and scenic landscapes offer diverse climbing, hiking and biking opportunities for folks who want to work up a sweat. In town, a paved riverfront trail, which runs from Joe Henry Memorial Park to Pacific Avenue, is a great place to stroll, cycle and rollerblade. If you want to make the heart valves squeak, Telegraph Pass in the Gila Mountains ascends over 1,200 feet in just 2 miles and rewards with breathtaking desert views.

Get Soaked in Yuma

Several outfitters rent canoes, kayaks and boats for adventures on the Colorado River. Let the river do the work with Yuma River Tubing; simply sit in an inner tube and ride the current, watching the sights drift by. Van rides are provided for a round trip. Marinas, landings and boat launches welcome fun seekers for a good time on the current.

The Gila River is a small stream for many miles before it flows into the Colorado River. It holds a variety of fish and would probably be the best opportunity for a walking fly fisher. Visitors to Yuma can find three points to fish the Colorado River: The Lower River and Laguna Reservoir yield plenty of bass, while the Imperial Reservoir offers a variety.

Largely owing to its warm climate and proximity to water for irrigation, Yuma County is a thriving agricultural community that produces over $3 billion a year in winter vegetables and other agricultural products. In fact, a third of Arizona’s agricultural produce comes from the Yuma County area, making it a prime winter snowbird spot for Field to Feast farm tours with gourmet farm-to-table lunches, farmer’s wife dinners, progressive dinners and other special events, which are scheduled throughout January, February and March. 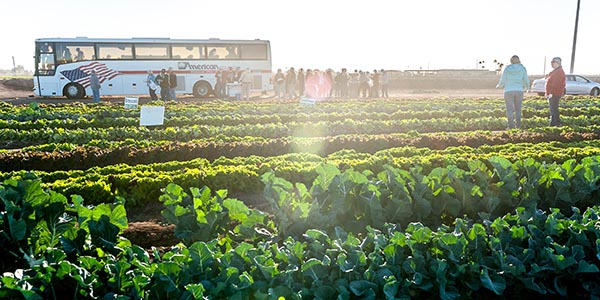 Yuma established itself as a bustling port town during the 1850s, as steamboats journeyed from the Gulf of California up the Colorado River. From 1864, all forts and military posts in the Southwest owed their survival to the Yuma Quartermaster Depot, which stocked enough clothing, food and ammunition to last for six months. With the advent of the railroads in 1877, the Depot’s reason for being terminated and it was closed in 1883. The buildings that comprise Yuma Quartermaster Depot State Historic Park are among Arizona’s oldest and best-preserved buildings. A series of exhibits present the development of the Colorado River, including the construction of the Yuma Siphon tunnel that irrigated the Yuma Valley in 1912.

While it may not be the city’s prime calling card, Yuma’s rejuvenated historic district is worthy of exploration. Blighted by floods, with a knockout punch in 1916, most of Main Street’s buildings date to the 1920s. The Yuma Art Center is an enticing space that houses a dynamic ensemble of regional and national artworks. Next door, the much-storied Historic Yuma Theatre (now a movie theater) has been restored to its 1912 heyday. Inside, visitors can view art deco murals, a cast plaster bas-relief, original light fixtures and one of just a handful of existing original carbon-arc projectors. 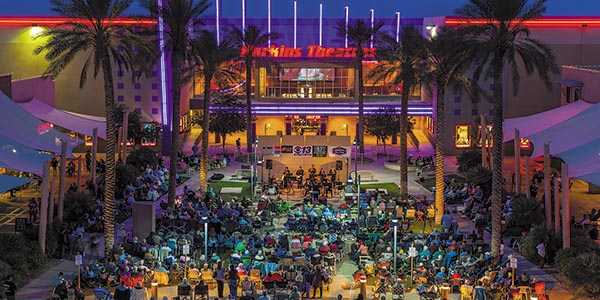 Enjoying a warm night of music and relaxation outside Yuma’s Harkins Theatres.

Fun Under the Yuma Sun

Locked Up in Yuma

At the Yuma Territorial Prison State Historic Park, you can tour one of the Old West’s most infamous prisons. The prison opened in July 1876 and housed a total of over 3,069 inmates convicted of everything from polygamy to murder and grand larceny. The prison has been cited as an exemplary institution for its day with running water, flush toilets and electricity, a rarity for the time. Tours of the prison include a visit to the museum, the reconstructed guard tower with 360-degree views of Yuma, and the strap iron cells and solitary chamber.

Spur your adrenalin by off-roading in the country’s largest sandbox. Just 20 miles from the city, the Imperial Sand Dunes National Recreational Area covers over 40 miles, with dunes that tower as high as 300 feet. The desolate yet breathtaking terrain resembles an alien landscape. Not surprisingly, the dunes have served as backdrops for blockbusters including “Star Wars: Episode VI – Return of the Jedi” and “The Scorpion King.” A haven for thrill-seekers, this public land sees over 1 million visitors every year. During peak season, permits are required for vehicles. However, rangers will let you enter if you want to take a quick photo.

About 25 miles southwest of Yuma, Fortuna Mine was a quick boom-and-bust town that today is marked by an interpretive trail. Founded in 1894, Fortuna played a key role as an oasis offering food and water to travelers crossing the stark desert terrain. The mine yielded $2.5 million in gold, but by 1904 the vein was depleted. The 2-mile trail takes hikers past a stamp mill, a slurry pile, the Fortuna Cemetery and several mine shafts.

Wetlands in the Desert

After uncovering Yuma’s rich history, it’s time to have some fun on the water. Sit back and relax at West Wetlands Park, a beloved recreation destination in town on the banks of the Colorado River. This outdoor oasis is a prime bird-watching spot, thanks to its burrowing owl habitat and hummingbird garden. Play a round of disc golf at the nine-hole course or cast your line at West Wetlands Pond, which is regularly stocked with catfish, trout, bass and more. Nearby is Centennial Beach, the perfect spot to embark on boating, kayaking and river tubing adventures.

Water to the East

Not far from West Wetlands Park is Yuma East Wetlands. Once an overlooked property plagued by non-native plant species, the Yuma East Wetlands has been restored into a lovely and tranquil environment. Since 2002, more than 200,000 trees, plants and shrubs were planted, and more than 330,000 cubic yards of dirt were moved to create 2 miles of channels and lakes. As a result of these efforts, the local bird population has doubled, and species diversity has gone up by 75 percent. Today, the wetlands are a great place to unwind. The South Channel entices visitors for a day of fishing, kayaking, canoeing or paddleboarding.